Spanish superstar sets up final clash against Djokovic or Thiem

The Spanish superstar won the 39th edition of their legendary rivalry 6-3, 6-4, 6-2 in two hours and 25 minutes on Court Philippe Chatrier to improve to a 92-2 record at the clay-court Grand Slam championship. It was also his 14th win in 16 clay-court matches against Federer.

“The conditions out there today have been so hard, so [it was] difficult to manage,” said Nadal. It was a day to just focus, accept all the adversities, and just be focused on [being] positive all the time. That's what I tried to do.”

Nadal will now prepare to capture the 18th major championship crown of his career against World No. 1 Novak Djokovic, the 2016 champion in Paris, or Dominic Thiem, which would represent a repeat of last year’s final. Nadal trails Djokovic 26-28 in their FedEx ATP Head2Head series, but beat the Serbian three weeks ago for his ninth Internazionali BNL d'Italia title. He is 8-4 overall against Thiem and the Spaniard will be aiming to avenge his 6-4, 6-4 semi-final loss at the Barcelona Open Banc Sabadell in April.

“I hope to be ready to give my best level against one or the other if I am able,” said Nadal. “I think that I'm confident in myself. If I'm not able to execute my game plan, it's going to be complicated. But if I play well, and I have played well up to now, no, I've got all my chances. But it's always a match and anything can happen.”

Two weeks ago, 11-time Roland Garros champion Nadal admitted that when it is windy at his academy in Mallorca, he simply practises indoors, but on Friday, the 33-year-old played his best match of the championship: controlling his groundstroke length and neutralising Federer’s attacks to the net (17/35). Overall, Nadal hit 81 per cent of his first-serves into court, struck 32 winners and committed 18 unforced errors.

In less than perfect conditions, with light rain and gusts of wind recorded at more than 39 miles per hour, Nadal saved one break point in the first game and grew in confidence. Federer struggled, unsure of his groundstroke timing, and struck a backhand into the net on Nadal’s third break point in the second game. Nadal came within a point of leading 4-1, but Federer held on and sealed his first service break when Nadal over-hit a backhand.

More On Roger vs Rafa, XXXIX
* The Rivalry: 12 Stats You Need To Know
* Federer & Nadal's 10 Best Quotes About Each Other
* The History Of Nadal vs. Federer In Paris
* Roger & Rafa: Every Match Ever Played

Nadal’s depth of groundstroke continued to put pressure on Federer, who saved four break points in a 20-point sixth game. But on Nadal’s fifth opportunity, he forced Federer to play one extra stroke and took a 4-2 led with a forehand error from the Swiss. Nadal went on to close out the opener with a terrific backhand crosscourt winner - his eighth of the 51-minute first set.

“I think the first set was mostly about getting used to conditions,” said Federer. “It was incredibly windy. Especially for a big match like this for both of us, it's just really complicated. So you're trying to see how much can you do or can you not do? Are you playing flatter or with more spin? Are you keeping the ball in play? Are you going for stuff? I think that was basically the story of the first set, more or less.”

Federer committed 17 unforced errors, the majority coming in the first three games, before he settled. With clay dust blowing around the main show court, both players needed to take their time before delivering serves. At the President's Box end, through to the end of the first set, the average service game length was two minutes, 19 seconds and five minutes, 49 seconds at the other end of the court. 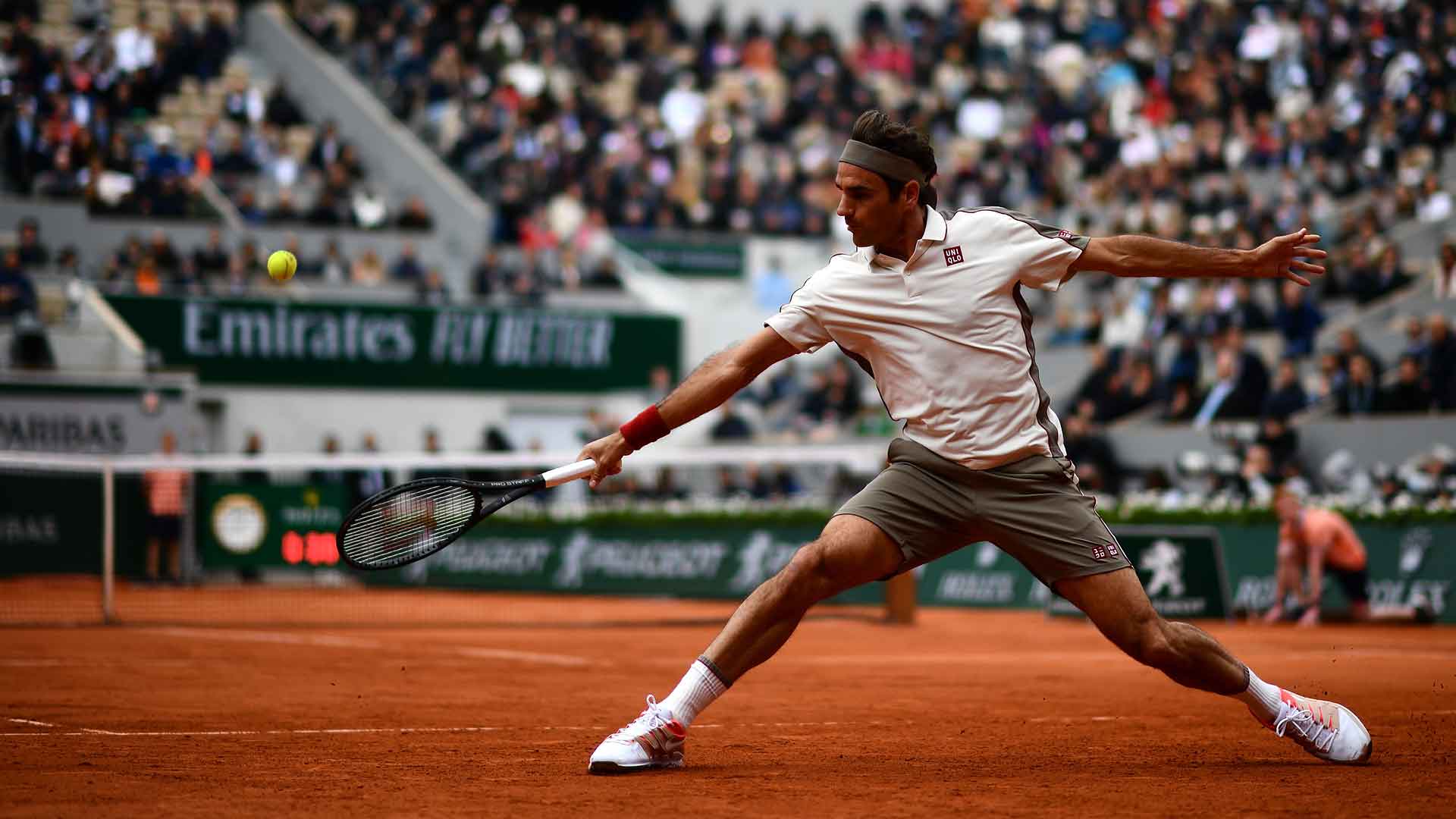 Federer took a 2-0 lead at the start of the second set when Nadal struck a backhand down the line long at 30/40. Minutes later, Nadal bounced back. Defending deep behind the baseline, Nadal converted his third break point chance with a forehand winner off a Federer smash.

“Second set, I think there is definitely a big regret to get broken at 2-0 with the wind on my back,” said Federer. “If I can avoid that one, maybe the second set turns out to be different. But I think holding serve against the wind with Rafa's quality on the return is just really hard. He barely misses any.

“And then when he's in the rally, he plays with great spin on the forehand, great sort of control on the backhand side. So it's just really hard to find holes, especially in the wind, if you're trying to hit through the ball, which is really difficult, actually. But it was windy for both. He was better, no doubt about it. But I had maybe mini chances today, but they were not big enough to win today.”

Federer, serving first in the set, applied the pressure, hitting deep and approaching the net at the right times, but Nadal was locked in on his groundstroke length and found gaps in the court. At 4-4, Federer led 40/0 but Nadal recovered with relentless consistency and won his fifth straight point to break with a forehand volley. Nadal then closed out the second set, which lasted 50 minutes, with a hold to love.

Nadal took complete control when returning a backhand, which clipped the net and caught Federer off-guard on break point at 2-1 in the third set. Frustrated, Federer launched a tennis ball out of the show court. At 1-3, 15/40 Nadal completed a 16-stroke rally with a forehand winner to effectively end Federer’s challenge. Nadal won eight of nine games from 3-4 down in the second set to 5-1 in the third set and went on to complete his sixth victory over Federer at Roland Garros.