Clinical Nadal Up And Running In Paris

Spaniard improves to 94-2 at the clay-court major championship

Rafael Nadal began his quest for a 13th Roland Garros title on Monday, beating Egor Gerasimov 6-4, 6-4, 6-2 to reach the second round.

The Spaniard converted each of his five break points and landed 32 winners to move through to the second round after two hours and five minutes. Nadal improves to 16-0 in first-round matches at the clay-court Grand Slam championship, with 14 of those wins coming in straight sets.

“It is a different Roland Garros. Totally different than we are used to… But for me this year is as special as every one at Roland Garros,” Nadal said on court. “I am going to keep trying my best. I am happy to be in the second round [after] a good start and now is the moment to go back to the hotel, have a good practice tomorrow and try to be ready for the second round.”

Nadal is bidding to equal Roger Federer’s record haul of 20 Grand Slam singles titles this fortnight. If he wins seven matches to lift the trophy, he will also become the first player to record 100 victories at the tournament. Nadal already holds the record number of wins at Stade Roland Garros, having won 94 of his 96 matches at the event.

The 12-time champion is playing in his second clay event of the season. Nadal returned to the surface for the first time since last year’s Roland Garros championship match at the Internazionali BNL d’Italia two weeks ago. After dropping just six games in his opening two matches at the ATP Masters 1000, the nine-time Rome champion lost in straight-sets to eventual runner-up Diego Schwartzman.

Nadal will meet Mackenzie McDonald in the second round. The 25-year-old American recovered from a set down to defeat Canadian qualifier Steven Diez 4-6, 6-3, 6-3, 6-4 in two hours and 48 minutes. 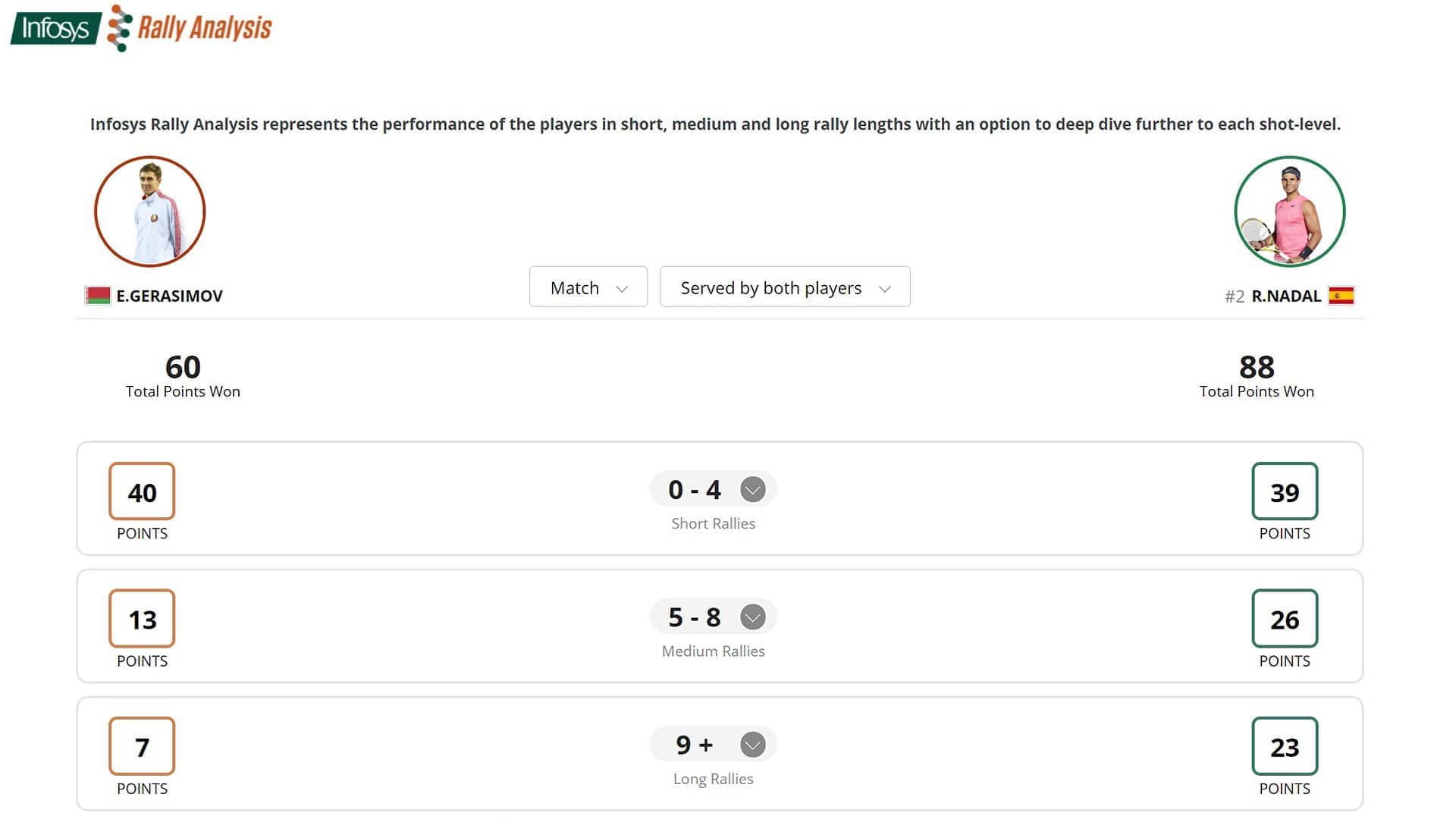 With the roof open on a new-look Court Philippe-Chatrier, Nadal served with consistency throughout the first-round encounter. The World No. 2 dropped just eight points behind his first serve and did not face a break point in the opening two sets.

"I played quite a solid match when I was serving. I was playing some good points. I did some good forehands, winners down the line. That's a key shot for me. And then I had to play a little bit [deeper]. I played sometimes too short," Nadal said. "But in general terms, that's a normal first match of Roland Garros. Coming with the situation that I am coming, I am happy, honestly. I did the things that I had to do. I didn't expect much more. I didn't expect less, too."

Nadal was also clinical on break points. The 34-year-old created two break opportunities in the first two sets and took both of them. Nadal also played with consistency from the baseline, using his forehand to move Gerasimov out of position and create space for winners.

Gerasimov broke serve for the first time at the start of the third set, but Nadal immediately recovered with powerful forehands and impressive court coverage. After falling heavily in the fourth game, Gerasimov received treatment to his right ankle at 2-2. Nadal motored to the finish line, ripping forehands to gain his fifth straight game and serve for the match at 5-2. The 6’1” left-hander booked his spot in the second round when Gerasimov netted a crosscourt backhand return.