Rafael Nadal wins his first FedEx ATP Head2Head meeting against Yuichi Sugita to reach the second round at SW19.

When the Wimbledon draw came out, all eyes were set on a potential second-round blockbuster between two-time champion Rafael Nadal and talented Aussie Nick Kyrgios. And after both men won their openers on Tuesday at SW19, that’s exactly what the fans will get.

Nadal did not play a match since claiming his 12th Roland Garros title last month. But the Spaniard showed little rust on No. 1 Court, dismissing Japan’s Yuichi Sugita 6-3, 6-1, 6-3. The third seed is now 23-1 against qualifiers at Grand Slam championships.

"[It was] a good start for me, winning in straight sets against a player that knows how to play on grass. He won a tournament. He won against good players on this surface. So it's a positive start for me," Nadal said. "I have another day tomorrow to keep working on the things that I need to work [on]. I hope that's going to help me."

It will be Nadal and Kyrgios' seventh FedEx ATP Head2Head match (tied 3-3). Kyrgios beat Nadal in Acapulco earlier this year, and also upset the Spaniard at Wimbledon in 2014.

"I'll play against a top talent player, a very dangerous player," Nadal said. "He's a very dangerous opponent. Of course, [for a] second round it's a super tough one. I know that. I need to be at my 100 per cent. I'm going to fight for it."

Sugita, despite being No. 274 in the ATP Rankings, was a tricky opponent, having won a grass-court title at Antalya two years ago and climbing to World No. 36 later that year. But Nadal broke Sugita's serve six times, and was only broken himself once, and that came in the first game of the match.

What was most impressive was that Nadal won 46 per cent of his first-serve return points, keeping the 30-year-old Japanese from earning many, if any, free points off his first delivery.

The World No. 2 is trying to win his 19th Grand Slam title, and he has enjoyed plenty of success at the majors lately. Nadal has advanced to at least the semi-finals at five consecutive Slams, but his 2014 Wimbledon conqueror awaits.

"It was incredibly tough. I think coming into today, Thommo was probably one of the most in-form grass-courters of the season. He made his first final in 's-Hertogenbosch. He's obviously feeling pretty comfortable on the grass," Kyrgios said. "I looked at my draw, I was excited because we've known each other since we were about nine. We played at every age group. To see each other playing at the highest level against each other, it was pretty cool."

The match was on World No. 43 Kyrgios’ racquet, but Thompson, just one place below his countryman in the ATP Rankings, took advantage of all of Kyrgios’ slip-ups with his consistency. Any time Kyrgios attempted a trick shot or made an interesting shot selection, Thompson was ready to pounce. 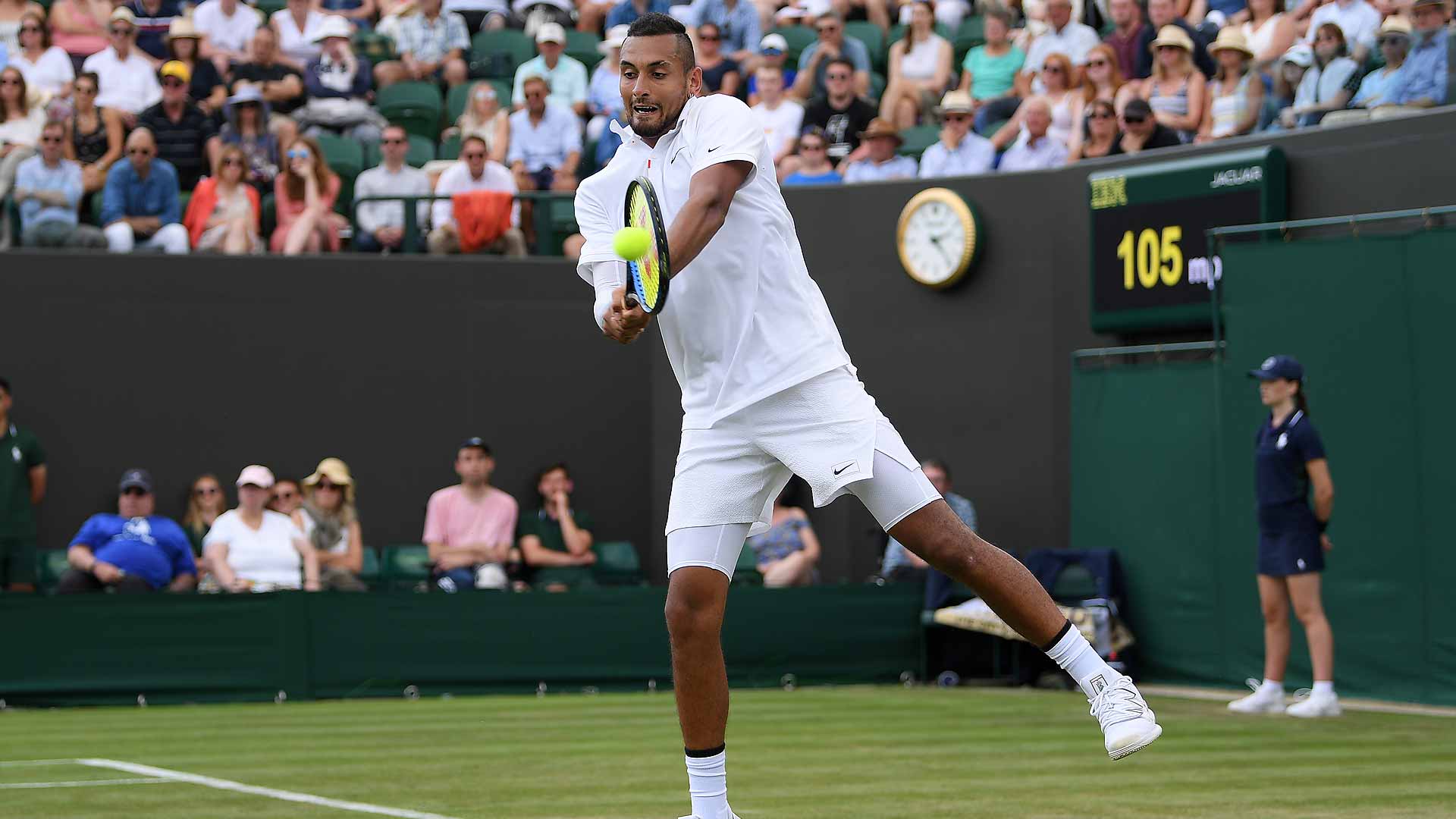 It appeared the key would be the third-set tie-break, in which Kyrgios needed eight set points to close it out. But even after losing the 19-minute tie-break, Thompson immediately responded with a service break, and then two more after that, to quickly force a decider.

Kyrgios’ momentary loss of focus gave Thompson plenty of momentum, putting the latter in position to claim his first win at The Championships, especially as he earned a break point to start the fifth set. But Kyrgios locked down his side of the court and on his second break opportunity at 2-1, he hit a backhand return to Thompson’s shoestrings, eliciting a short ball that he was able to take advantage of to earn the break.

From there, Kyrgios did not look back, hitting a forehand half volley winner — his 63rd winner of the match — to earn a shot at Nadal.

"I was very motivated today. But I wasn't looking forward because I knew that Thommo has been playing very well. He was more than capable of winning today as well," Kyrgios said. "There were a couple moments if they went his way, he could have been easily the one in this chair at the moment."

In other action, No. 18 seed Nikoloz Basilashvili battled from two sets down to beat home favourite James Ward 2-6, 4-6, 6-4, 6-4, 8-6 in three hours and 28 minutes. The Georgian, who reached the third round at SW19 in 2015, will next play Brit Daniel Evans, who ousted Argentine Federico Delbonis 6-3, 7-6(5), 6-3 in two hours and 14 minutes. Evans won two grass-court ATP Challenger Tour events in the lead-up to The Championships.

"I'm playing great. It's a difficult match today," Evans said. "Obviously he played a lot different to anyone I've come across on the grass. Just pretty happy to just come through."