Rafael Nadal has refined his service action with his coaching team since last competing in September 2018.

Is it possible, at 32 years old and with 15 seasons on the ATP Tour, to rework an already highly successful formula?

If you’re Rafael Nadal, the answer is “of course.”

The Spaniard did a double training session Wednesday on Margaret Court Arena at the Australian Open: a morning practice with Great Britain’s Kyle Edmund, then an afternoon session with coach Carlos Moya. Nadal will kick off the 2019 season on 14 January in Melbourne, several days later than the initial intended start date due to a thigh ailment that forced the World No. 2 to pull out of the Brisbane International.

While recuperating from the leg injury, Nadal also made time to develop another wrinkle in his game: The 17-time Grand Slam champion has been tweaking his service motion with the intent to produce more velocity and immediately put opponents under pressure.

“We’re looking to maximise damage from the onset, and one way to do that is with a faster, more aggressive serve,” Moya told ATPTour.com following his afternoon practice session with Nadal. “We’ve been working out the mechanics of his serve; his motion now is more fluid. Before, the ball he served lost power immediately after bouncing. That isn’t the case anymore; his serve maintains speed now after making contact with the court, making it that much more potent.”

You May Also Like: Federer, Nadal In Same Half Of Australian Open Draw

Fellow coach Francisco Roig echoed Moya’s thoughts and broke down the technical aspects that were applied to Nadal’s service motion.

“The change is based on three pillars,” Roig explained. “The first is that when he executes the swing, he takes his hand away from the ball quicker, instead of letting his hand linger. Second, Rafa is working on staying more upright and using his size, rather than launching into the serve by twisting and recoiling. That extra spring motion actually resulted in a reduction of power after the ball bounced. The last thing we’re working on is getting Rafa to plant his right foot in the court upon landing from his serve.

“An added benefit is that his second serve is also going to throw opponents off. It might be a more risky approach, but the positive part is that his opponents won’t be looking at the same high bounce; they’ll have to be more on their toes and react faster instead of just keeping the ball in play.” 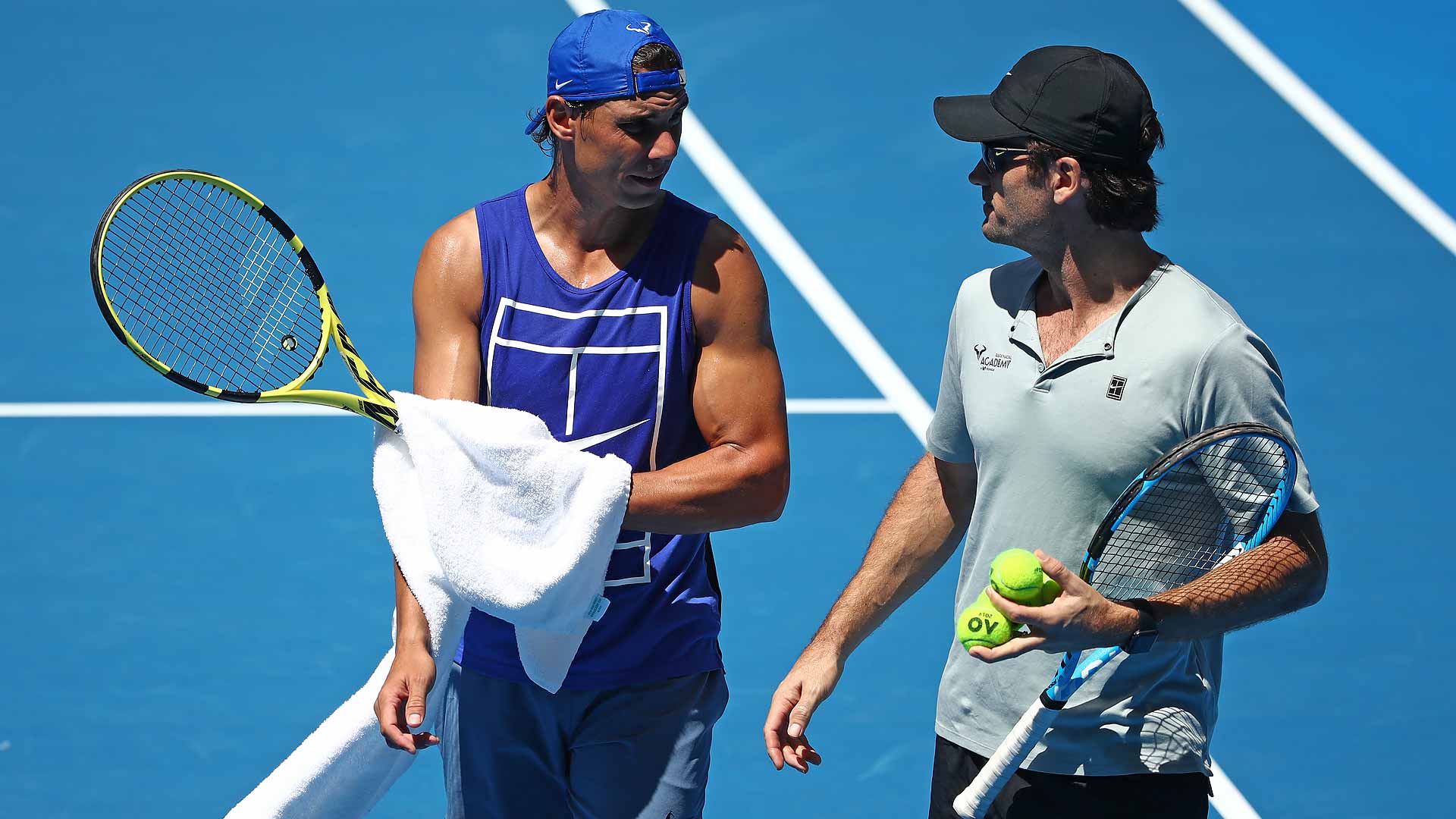 According to Moya, the idea to alter Nadal’s service swing was conceived following Nadal’s semi-final showdown against Juan Martin del Potro at the 2018 US Open. Nadal was forced to retire from that match while trailing 6-7(3), 2-6 due to a knee tendon injury. Nadal and his team identified the slight weakness in his serve and devised a plan to improve the motion.

Nadal had planned to test his tweaked service motion at the Rolex Paris Masters before being forced to withdraw from the event with an abdominal injury. The Spaniard used the time on the sidelines to undergo surgery to remove bone fragments in his right ankle, and to convene with his team and further develop the tactics needed to fine-tune his game.

“These changes came following that match at the US Open,” Moya said. “Rafa was all for the changes, even if meant added work.

“He was the first to identify the weakness in his serve, and we as a team formulated an approach to improve it. We were sidetracked [in late 2018] because of the abdominal injury and the right ankle surgery but finally got around to physically working out the new service motion after recovery. I’m happy to say he’s now comfortable with the revamped serve motion.”

Team Nadal is practical in the differences a reworked serve will mean to match results and have made it clear the left-handed player won’t be matching the likes of John Isner, Ivo Karlovic or Milos Raonic in terms of service pace or aces. The intended result of the tweak is to maintain the team’s philosophy of constantly evolving and to add to an already formidable arsenal of weapons.

“This isn’t some radical change; it’s just adjusting a weapon we believe will take him to even higher levels,” Moya said. We’ve done ‘trial runs’ in mock matches, just to ensure he’s comfortable when it’s time to compete. The modified serve was a tricky adjustment at first, but now that he’s found his groove, he’s back in his comfort zone.”

Moya is confident the 2009 Australian Open champion will be in his best form come Monday, and that the Spaniard’s serve will be in full effect.

“Rafa has taken onboard adjustments to his game in the past,” Moya said. “This is just one more chapter in his career, and another addition to his development.”