Rafael Nadal owns a 67-7 record at the Internazionali BNL d'Italia.

Rafael Nadal extended his perfect Internazionali BNL d'Italia semi-final record to 12-0 on Saturday with a 6-4, 6-4 victory against Reilly Opelka.

The nine-time champion claimed a single break in each set to move one win away from a record-equalling 36th ATP Masters 1000 title. Nadal is now also within touching distance of winning a single tour-level event on 10 or more occasions for the fourth time. The Spaniard already owns 13 Roland Garros crowns, 12 Barcelona trophies and 11 Monte-Carlo titles.

After saving two match points against Denis Shapovalov in the third round and nine of the 10 break points he faced against Alexander Zverev in the quarter-finals, Nadal continued to find his best tennis in critical moments against Opelka. The second seed saved four break points at 2-1 in the first set and broke serve in two of the three games where he earned a break point to advance to the championship match.

“I did the thing that I had to do today,” Nadal said in his post-match interview. “It is not an easy, beautiful match to play and, [against] a player like Reilly, [you aren’t going to] have rhythm. You know you are going to have just a few options on your return and you know he can play very aggressive from the baseline. That is what happened at the beginning of the match. He had some options [for the] break and it was super important for me to save those moments.”

Opelka had not dropped serve en route to the semi-finals, having saved all six break points he had faced across his opening four matches. The American's low first-serve percentage (52%) gave Nadal a chance to extend rallies and the Mallorcan used his opportunities well to reach a record-equalling 52nd Masters 1000 final.

After saving four break points with strong serving at 1-2 in the first set, Nadal fired a backhand return winner and capitalised on Opelka errors to gain the only break of the first set. The five-time year-end World No. 1 took advantage of missed first serves in the second set to break through at 1-1 and he maintained his advantage on serve to reach his 12th final in Rome (9-2).

“I did a lot of things well [and played with a] good spirit during all the week,” Nadal said. “[There are] a lot of positive things I did on court this week and it is important for my confidence to be back in such an important final like this one.” 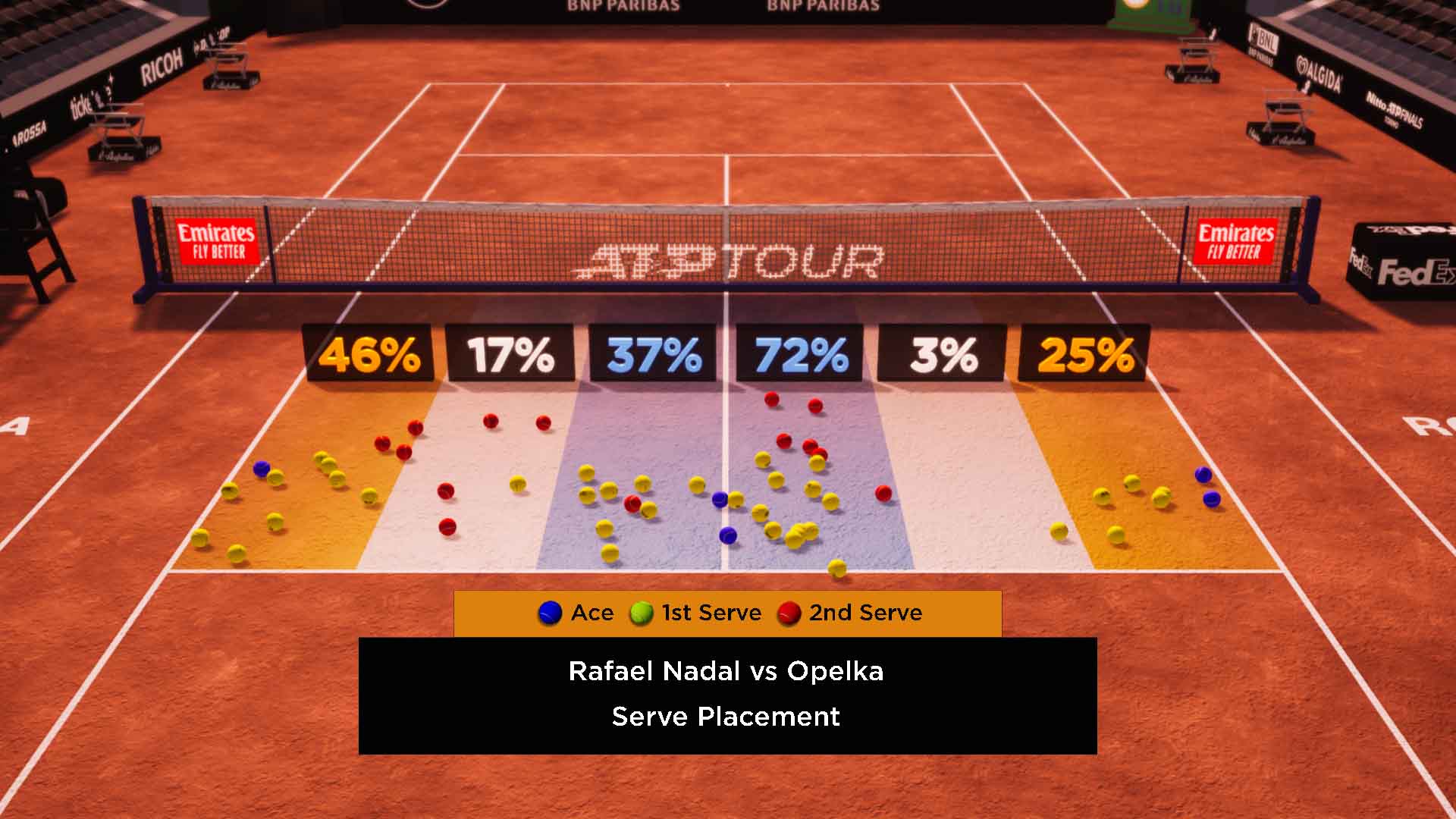 The 6’1” left-hander will meet five-time champion Novak Djokovic in the final. Nadal and Djokovic have won 14 of the past 16 editions of this event and have met on eight occasions at the Foro Italico (Nadal leads 5-3).

Opelka was bidding to become the first American Masters 1000 finalist on clay since Andre Agassi lifted the 2002 Rome trophy. The American entered the tournament on a six-match losing streak and held just two wins from 12 tour level matches on clay, but he claimed four straight-sets victories to reach his maiden Masters 1000 semi-final in Rome. 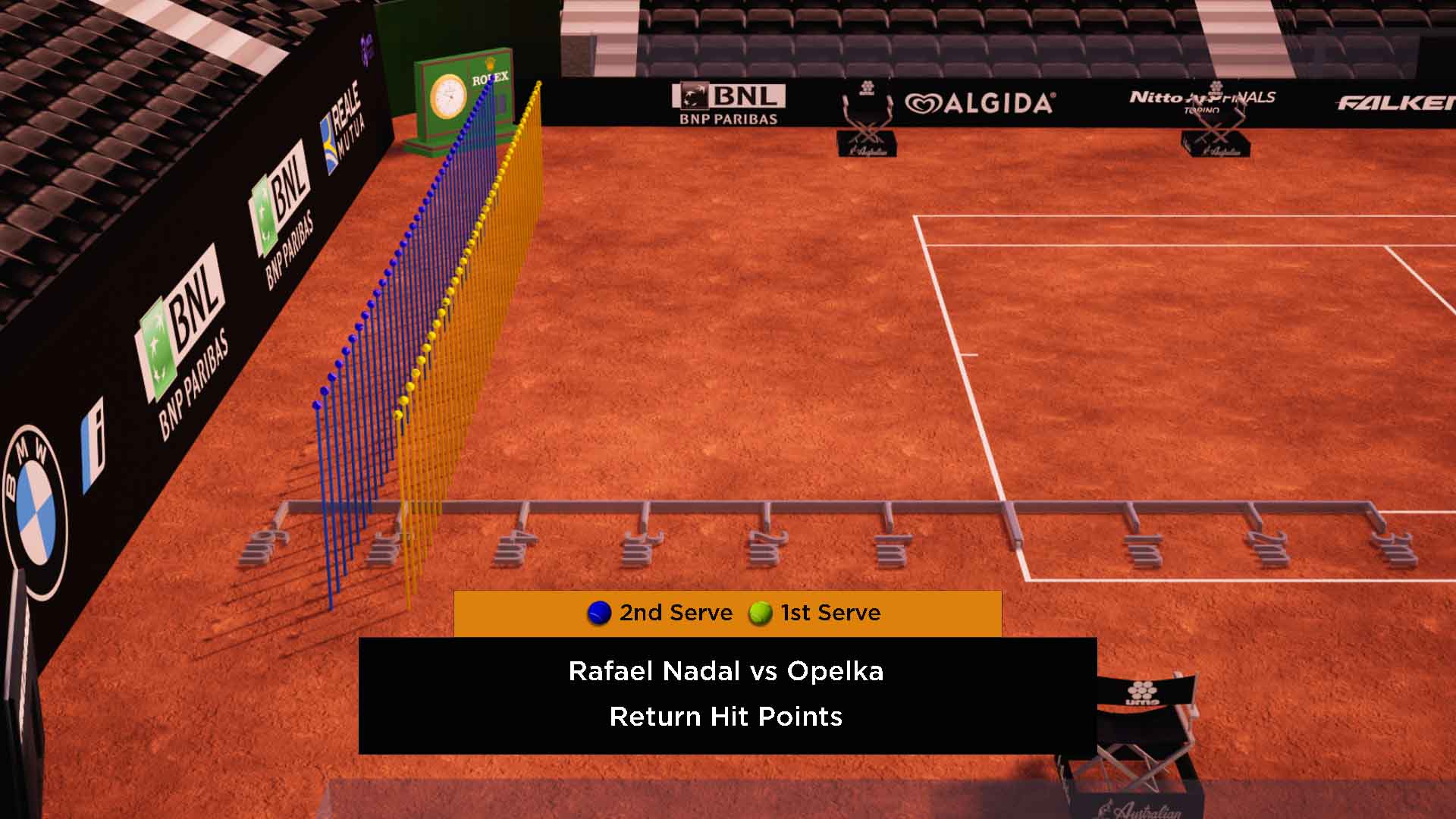