Rafael Nadal avoided a post-US Open letdown at the Laver Cup in Geneva, weathering an aggressive performance from Milos Raonic to prevail 6-3, 7-6(1) and give Team Europe a commanding lead over Team World on Saturday. Jack Sock/Nick Kyrgios defeated Nadal/Stefanos Tsitsipas 6-4, 3-6, 10-6 in the last match of the night.

Team Europe leads Team World 7-5 heading into the final day of play, with each match on Sunday's schedule worth three points. Team World must win three of the four matches in order to take the Laver Cup for the first time.

You May Also Like: Federer: Nadal Is Pumped For Laver Cup

Nadal improved to 8-2 against Raonic in their FedEx ATP Head2Head rivalry and boosted his Laver Cup singles record to 2-1. Raonic was making his debut at this event. The Spaniard also increased his winning streak to 11 matches.

“Being here for me is a very positive energy. I like being around such a great team and the crowd is amazing,” Nadal said. “I feel very lucky [to win] the first set. I started to play better later in the match and I think I played a very good tie-break in the end.”

The Canadian was left to rue eight missed break point opportunities in Nadal’s first three service games of the match. Sensing his opponent’s frustration, Nadal applied further pressure at 3-3 and laced a backhand passing shot to earn the first break of the night. A backhand volley sent wide from Raonic two games later wrapped up the opening set.

Raonic earned his first break of the match at 2-2 in the second set and it appeared the momentum had shifted, but sound advice from Federer at the changeover allowed Nadal to refocus.

“When you see a chance to come to the net, challenge him for a passing shot. You’re so good at the net,” Federer said. “Use spin, slice… you know, like in the old days!”

Nadal broke back in the next game with a delicate drop shot and backhand volley winner, throwing his fist in the air in approval. The set eventually moved to a tie-break and Nadal unleashed a barrage of forehand winners to take the first six points. A final winner from the Spaniard wrapped up play after two hours and seven minutes. 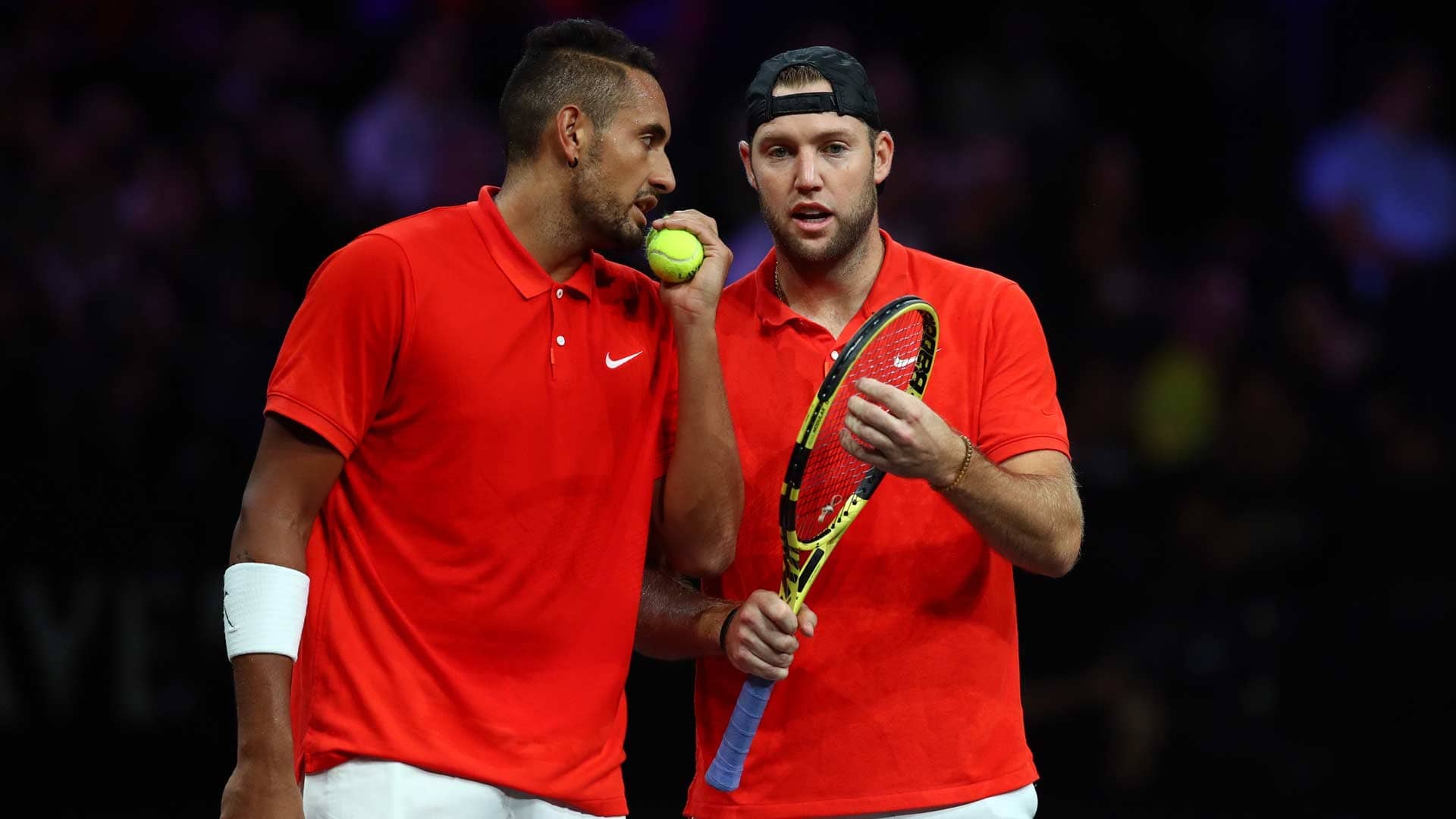 Nadal returned for doubles action after a brief break, but struggled to find chemistry with Tsitsipas early on in their debut outing as a team. Tsitsipas was broken in the first game and Kyrgios/Sock rode that slight advantage to the opening set. But at 1-1 in the second set, Nadal/Tsitsipas found their footing and went on a four-game run. With Nadal's aggressive baseline play setting up Tsitsipas at the net, a forehand volley winner from the #NextGenATP Greek forced a Match Tie-break.

Both teams stayed even until a delicate drop volley winner from the Aussie gave Kyrgios/Sock a 6/4 mini-break advantage. A big first serve from Kyrgios on their third match point wrapped up play after one hour and 21 minutes.

Not done yet 💪#TeamWorld win the doubles on day two to keep their #LaverCup dreams well & truly alive...@NickKyrgios | @JackSock pic.twitter.com/p8zMZ4Ncfw

“It’s nice to win some close ones,” said Team World Captain John McEnroe. “They stepped up and won one of the best Match Tie-breaks I’ve seen on the doubles court. [Kyrgios and Sock] have got a great chemistry and they should definitely play together more often.”

Sock, who defeated Fabio Fognini in singles action on Friday, is responsible for three of Team World's five points so far this weekend. He moved to 6-2 in Laver Cup doubles action, while Kyrgios remains unbeaten in doubles (3-0) at this event.

The day session saw John Isner produce a win for Team World by rallying from a set down to defeat Alexander Zverev, followed by Roger Federer doing the same against Kyrgios.