Rafa On 'The Greatest' Debate: 'Analyse It When Our Careers Are Over'

The morning after winning his 13th Roland Garros trophy and equalling Roger Federer’s record haul of 20 Grand Slam crowns, Rafael Nadal had a lot of things to do and very little time.

So, after a brief photo session on the terrace of his hotel with the Coupe des Mousquetaires, the Spaniard climbed into a car to the airport for his flight home and gave an interview to ATPTour.com over a Zoom video call. Nadal spoke in Spanish and his answers have been translated.

This is Nadal with his guard down, a tennis player talking openly and transparently.

Have you stamped your authority by winning the title in Paris again, but this time in very unfavourable conditions?
Stamping my authority is not really my thing. I played a very good tournament given the conditions, taking steps forward every day. I played the perfect match when I had to in the final. Simply, every day I played well enough to win the matches.

Did you think that maybe you wouldn’t win this year?
Every time I come to Paris I don’t think I’m going to win. I arrive excited that I might do it, but knowing that the most logical outcome is that I don’t. Winning is not normal, and I am always very aware of that. As I said from the first day, this year was the most adverse Roland Garros I have played in, first because of the conditions and second because my preparation was practically non-existent in terms of tournaments.

Where did the plan come from to approach the final against Djokovic in that way?
My last match on clay with him was in Rome last year. There I was coming out of a very bad spell and I played very well. I used that as a kind of reference. We went out with a more or less clear idea of what we wanted to do. And then the more complicated part came: putting it into practice. Luckily, yesterday was one of those days when I was able to do it. My tennis game was feeling really good and everything worked perfectly. 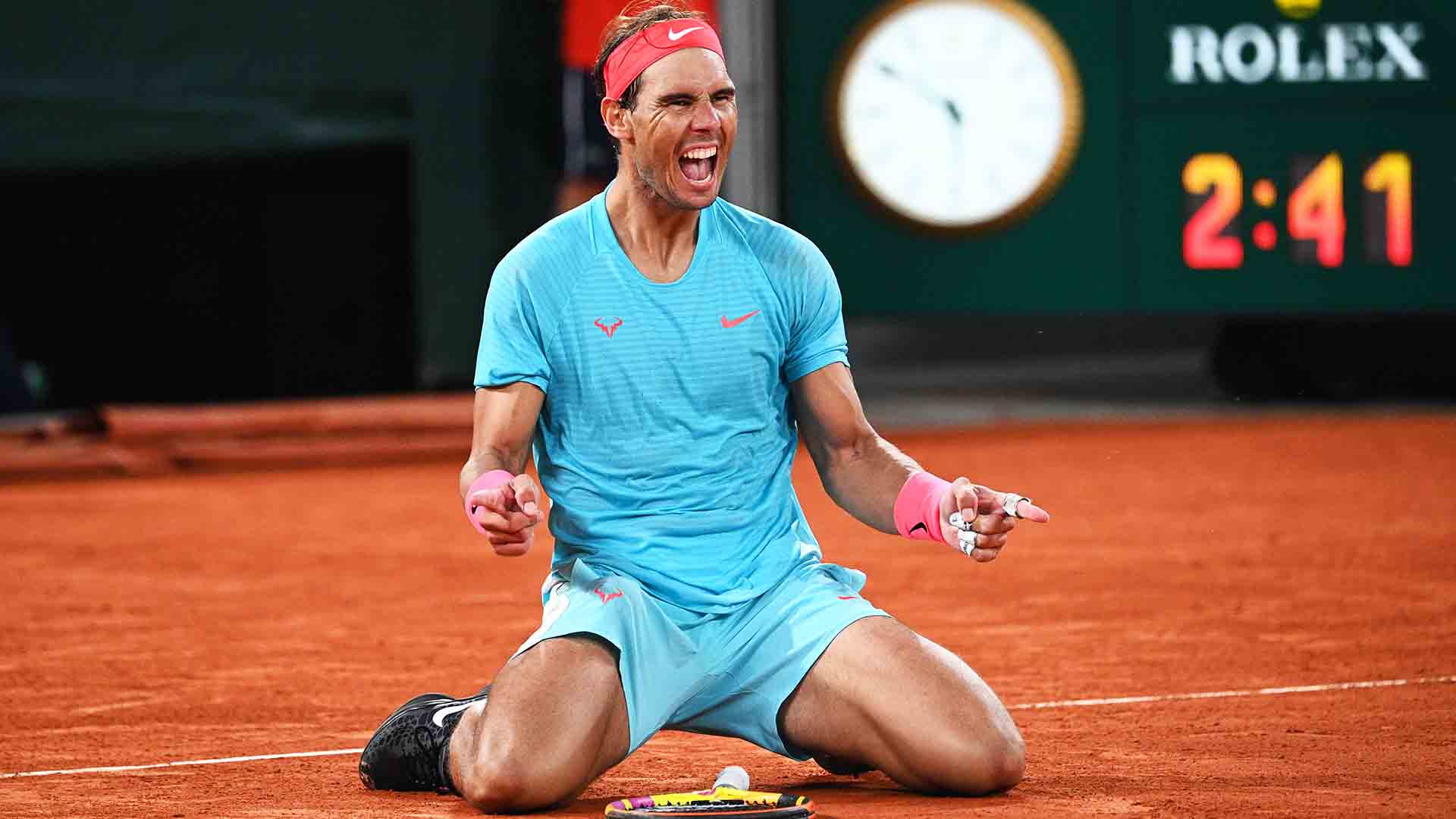 From the first day, and despite losing in the quarter-finals in Rome, your surroundings added weight to an interesting message: the big difference between the Foro Italico and Court Philippe-Chatrier.
In Rome, I have won nine times, the venue also suits me very well. Chatrier is a very difficult court, very big. You have some huge dimensions there. However, there is one intangible thing. When you’ve played very well many times in one place, it’s easier to do it. There’s extra belief in yourself, and that has a decisive influence.

After winning the final, you said that you’d been through some ‘difficult months’. What were you talking about?
On a social level, we’ve been living with continuous problems. On a personal level, it’s a reality that after the lockdown I went through a bad time, my body did not respond in the best way possible. I had a lot of days where I could only train very little, with unpleasant feelings in my body. All of that, together with training without clear goals, makes the problem worse.

What did you do to overcome that?
I had the right people by my side. They pushed me when necessary and they gave me the freedom to enjoy other things when I really needed to. We’ve had to make difficult decisions, like not going to New York. Everything is good or bad based on the final result. Right now, it seems like it was successful because I won at Roland Garros, if I had lost maybe it wouldn’t have been so good. That’s the reality of sport, a totally result-based world. The decisions were made consensually, analysing everything. Beyond the result, personally, I’m very happy with the steps we took.

How has what is going on in the world affected you?
I’ve been more subdued than normal, but that’s a general feeling throughout the world. We’re in a sad situation. You can’t share moments with people you’d like to. Everything is less pleasant and you cannot remove yourself from the things that are going on in the world, also knowing that we are back in a complicated situation in Spain. It is normal to suffer because of what’s happening. There have been other pandemics in the past, but in recent history we have not been through one. Even so, I’ve been focused and had the necessary attitude when required. It’s the thing I am most satisfied about in the whole tournament.

And the bubble? You’ve been locked in it with Carlos Moya and Rafael Maymo for more than two weeks.
Personally, I find it harder than they do. I’m a person who prefers being with people more. Carlos has always had the ability to get by on his own, as has Rafa. For me it’s a little harder. The days have seemed longer to me than to them, but we’ve rediscovered things that we had forgotten. It’d been three years since I’d picked up a PlayStation controller, and we played it a lot with each other. We’ve also been reading all the latest news and watching the odd series to kill time.

Was it difficult to play without fans?
At least here there was an atmosphere, compared to Rome. Yesterday, there were people in the final for the first time. My family and team were in my box. That changed the perspective of everything a little. In Rome, the whole court was empty, a much more difficult situation.

Are you overwhelmed by the response to your victory?
I don’t know what it’s been like because I’ve barely had the chance to look at anything. On a sporting level, it’s clear that I’ve achieved something significant: winning one of the most important tournaments in the world 13 times and equalling Federer with 20. We’ve been talking about this for a long time, particularly you journalists. I’ve managed to equal a record that seemed impossible.

So, can it now be said openly that you are the best in history?
The numbers should be analysed by people who have good knowledge of the history of tennis. Honestly, it doesn’t matter to me much. I’m happy with my career. At the moment, it’s clear that I’m one of the two. We’ll see what happens in the next few years: what Djokovic does, what Federer does when he returns and what I keep doing. If all goes well, we’ll have time to analyse it when our careers are over.

Federer was one of the first to congratulate you.
Federer and I have had a very good relationship for many years. We have great admiration for one another. We’ve shared many of the most important moments of our careers competing against one another to the point of creating a rivalry that has surpassed the boundaries of tennis. We value it and appreciate it in a special way. Tying him at 20 means a lot, it’s a great honour. It’s a wonderful thing.

Can one have a good relationship despite competing for the same thing?
As always, you have to put things into perspective a little. We’re playing tennis, nothing more. Life is more pleasant when you have a good relationship with your rivals. Going into the locker room with a positive atmosphere, talking to others, it makes life more enjoyable at tournaments than if you have extreme rivalries.

With 20 Grand Slams, what’s left to win?
To keep enjoying daily life. In the end, I’m a lucky person. Life has smiled upon me so far. I don’t know what is left for me to win, but the excitement is in continuing to move forward. If you don’t have that enthusiasm it’s time to dedicate yourself to something else. As long as I have it, I have to keep working hard every day to keep giving myself chances of competing at the highest level.

Before your opener in Rome, in 2014, you said that Bjorn Borg’s head was gone at 26, despite being an exceptional champion. What do you do to keep that flame burning at 34?
Like everyone, I’ve had some good times and some bad, times of enthusiasm and times of disillusion, above all when there were more physical issues than normal. I’ve been lucky to have a fantastic environment around me, a family and a team that have been with me throughout my career. I have a stable personality, I’m not overexcited when things go well, and nor am I excessively negative when they go wrong. That helps me to experience things with peace of mind in order to continue. In the end, it all comes down to something simpler: the passion you are born with.

What do you feel like doing when you get to Mallorca?
Getting back into normal life a little. Returning home and having the feeling of freedom. Going to play golf, visiting the academy... Living a life a little more normal than these past 20 days and seeing people that I haven’t been able to during this whole time.

What’s left for you in 2020?
Today more than ever, decisions have to be taken calmly, analysing all the situations well. I need a little time to know what my schedule will be.