Rafael Nadal and Casper Ruud will meet for the first time when they take to court in the Roland Garros final on Sunday.

It is master vs. apprentice for the title at Roland Garros.

Rafael Nadal and Casper Ruud may be facing off for the first time in Sunday’s championship match in Paris, but that doesn’t mean the pair doesn’t know a thing or two about each other.

Eighth seed Ruud has trained at the Spaniard's academy in Mallorca since September 2018, and that link has Nadal feeling extra positive as he bids for a 14th Roland Garros crown and record-extending 22nd Grand Slam title at 3pm local time (CEST).

"I think in the academy we were able to help him a little bit during this period of time,” said the Spaniard after booking his spot in Sunday’s final at the clay-court major. “But more than [anything], as I always say, I like to see [a] good person achieving his dreams.

For Ruud, facing his childhood idol for the first time would be an exciting challenge no matter the setting, but the Norwegian admitted it is a fitting climax to his dream run this fortnight in Paris.

“It is amazing...He is the last player of the Big 3 and the very top players in the world I have never played against,” said Ruud of Nadal after beating Marin Cilic on Friday to book his spot in a first major final. “So, I guess this is perfect timing and worth the wait. To finally play him in a Grand Slam final will be a special moment for me. Hopefully a little bit for him as well.

"He has played so many finals, but at least he is playing a student from his academy this time. So, it is going to be a fun one hopefully.” Nadal has long been anointed one of the greatest players of all time, but the 36-year-old’s hunger for further Grand Slam success has burned as bright as ever this fortnight in Paris. Instead, the Spaniard’s major concern arriving in the French capital was how his body would hold up after he struggled with a chronic foot injury in defeat to Denis Shapovalov in Rome just over three weeks ago.

That has not stopped him coming through some gruelling battles on his way to a 14th final at Roland Garros. After opening with routine wins over Jordan Thompson, Corentin Moutet and Botic van de Zandschulp, Nadal edged a five-set thriller with Felix Auger-Aliassime before prevailing in a quarter-final classic against Novak Djokovic. The three hours spent on court before his opponent Alexander Zverev retired in the semi-finals brings Nadal’s time on court in his past three matches to 11 hours, 46 minutes, but the heavy workload is nothing new for the Spaniard.

"Physically I'm OK," said Nadal in his press conference following the Zverev match. "Normally my problem is not the physical performance…Of course today the conditions have been very hot, super humid. I know from experience that when these conditions happen, I suffer a little bit more in terms of [physicality]."

You May Also Like: Nadal: 'Physically I'm OK' After 'Surviving' SF

If Nadal can maintain his unbeaten record in championship matches at Roland Garros against Ruud, the 36-year-old will pass fellow Spaniard Andres Gimeno as the oldest Roland Garros men’s singles champion in history.


After clinching a record 21st major title at the Australian Open in January, Nadal can move two Grand Slam crowns clear of Novak Djokovic and Roger Federer with victory on Sunday. The Serbian and Swiss are tied on 20 major trophies. A successful outcome for Nadal would also represent the first time he has completed the Australian Open-Roland Garros double in a calendar year.

Should he win, Nadal will draw level with current Tour leader Carlos Alcaraz’s four titles for 2022, having clinched trophies in Melbourne and Acapulco alongside his Australian Open triumph. A win-loss record of 111-3 at Roland Garros certainly suggests the Spaniard will be difficult to stop as he seeks to write yet more history in Paris.

In contrast to Nadal’s familiarity with stepping onto Court Philippe Chatrier for a Roland Garros final, Ruud was in uncharted territory as early as his quarter-final clash with Holger Rune. The Norwegian had not been past the fourth round of a Grand Slam until this fortnight in Paris, but there were few signs of nerves from the 23-year-old as he recovered from a set down to oust Marin Cilic in the semi-finals.

Although Ruud’s longest match of the tournament was his opening three-hour, 49-minute win over Jo-Wilfried Tsonga, the Norwegian has spent 18 hours and two minutes on court in Paris, just six minutes fewer than Nadal overall. After downing Tsonga in four sets, the 23-year-old beat Emil Ruusuvuori, Lorenzo Sonego, Hubert Hurkacz, Rune and Cilic to become the first Norwegian to reach a Grand Slam final. 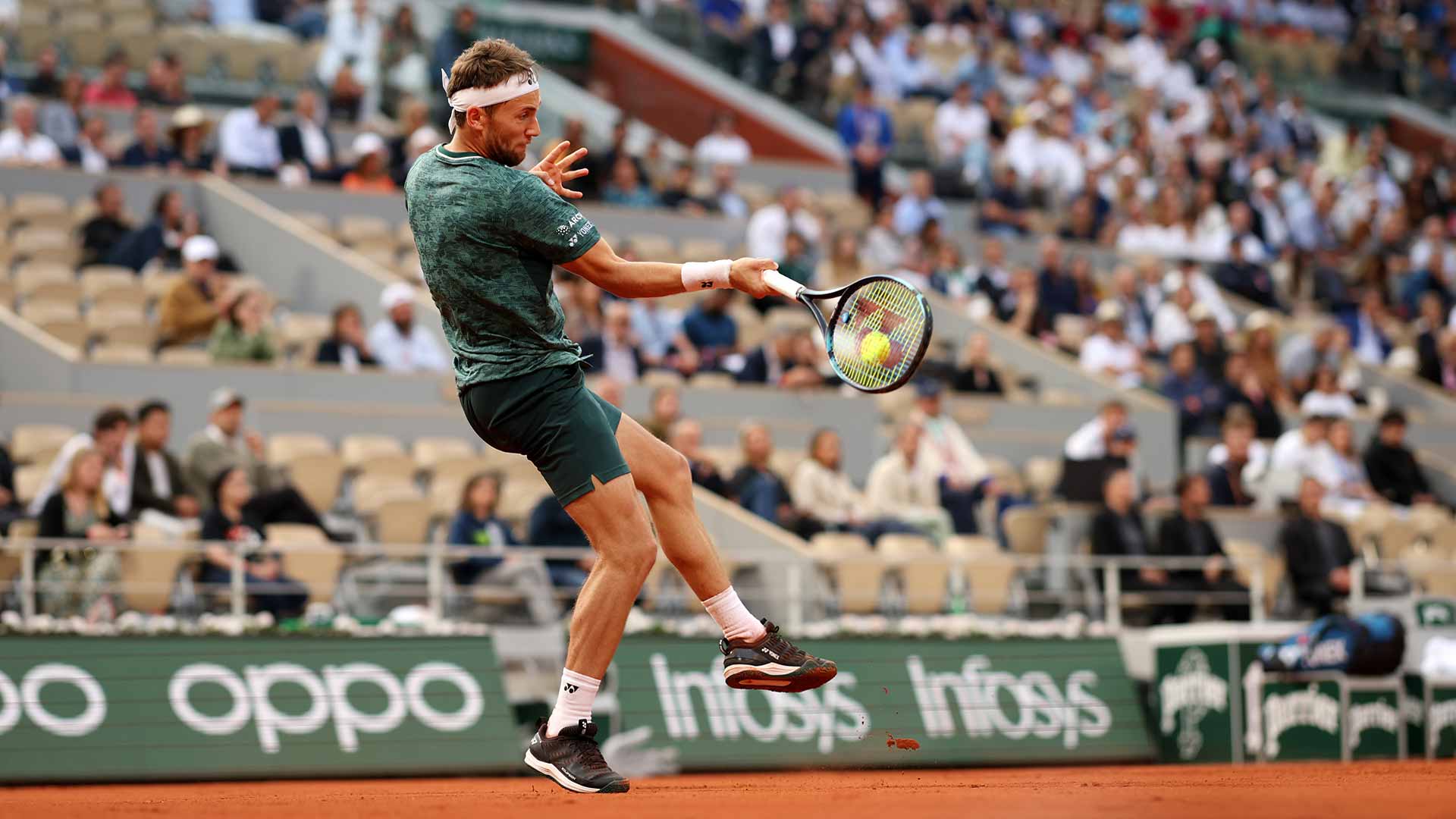 Ruud can look to some promising numbers as he bids to become the first man to beat Nadal in a final at Roland Garros. The World No. 8 has fired 52 aces in the tournament so far compared to just 13 for Nadal, also striking more winners (259 to 204) and fewer unforced errors (138 to 166) than his opponent. The Ruud forehand in particular has developed into one of the most fearsome weapons on Tour, and the Norwegian will need it to fire if he wants to make a dent in the Nadal defence.

Regardless of the result, Ruud will rise to a career-high No. 6 in the Pepperstone ATP Rankings on Monday. He has already picked up titles in Buenos Aires and Geneva this season and also reached a maiden ATP Masters 1000 final in Miami in March.

If he can find a way to get past Nadal, it would be the crowning achievement for three seasons of clay-court success for Ruud. The Norwegian has won 66 matches on the surface since 2020, 15 more than anyone else on Tour.


Ruud’s strong displays have brought him seven tour-level titles on clay, but he is yet to lift a trophy above ATP 250 level. Yet even considering Nadal's own unrivalled record on the surface, the Spaniard will be wary of Ruud. “For me, [it] is not a big surprise,” said Nadal when asked about the eight-time tour-level titlist’s run in Paris. “Casper is one of the candidates [for] winning in every clay-court event that he's playing. [It’s] not a big surprise at all."

Did You Know?
Nadal and Ruud’s clash will be the first Grand Slam final with a first-time meeting since the 2008 Australian Open championship match between Djokovic and Tsonga.