When at the Nitto ATP Finals, Alexander Zverev brings his best.

The defending champion upset the World No. 1 at The O2 for the second consecutive year on Monday, beating top seed Rafael Nadal 6-2, 6-4 for his first win against the Spaniard (1-5).

The 22-year-old German controlled the Group Andre Agassi matchup throughout, showing signs of the level that brought him his biggest title to date last year in London, when he became the first player to beat Roger Federer and then-No. 1 Novak Djokovic in tournament history.

“This means so much, playing here again after winning my biggest title so far in my career here last year. This means everything to me,” Zverev said.

“I was looking forward to this match, and thanks a lot for all the support, everybody who came out... The atmosphere is the reason why everybody is trying, the goal of the beginning of the season is to make London. Because playing here, playing in front of you all, playing in The O2 is something that we don't have during the year, and this is so special.”

Zverev took advantage of the quick indoor conditions and played attacking tennis against Nadal, who was playing his first match since withdrawing from his Rolex Paris Masters semi-final on 2 November (abdominal tear).

The German won 88 per cent (30/34) of his first-serve points and never faced a break point.

“I did not feel pain in the abdominal at all,” Nadal said. “Sascha, well played, and me, [badly] played, honestly. We can find reasons or excuses, but at the end of the day, [all that] really matters is I need to play much better in two days after tomorrow. That's the only thing.”

Zverev, after taking the opener and an early break, handed Nadal a window of opportunity with two double faults, falling behind 0/30. But the seventh seed composed himself to escape and never faced such trouble again on his racquet.

Nadal, meanwhile, struggled to find his best tennis. He was broken twice in the first set, both times missing forehands, and in the opening game of the second set, after a lengthy back-and-forth rally, Zverev finished off the break with a forehand volley. Zverev won 75 per cent (6/8) of his net forays.

View Infosys MatchBeats for detailed insights of every match at The O2. 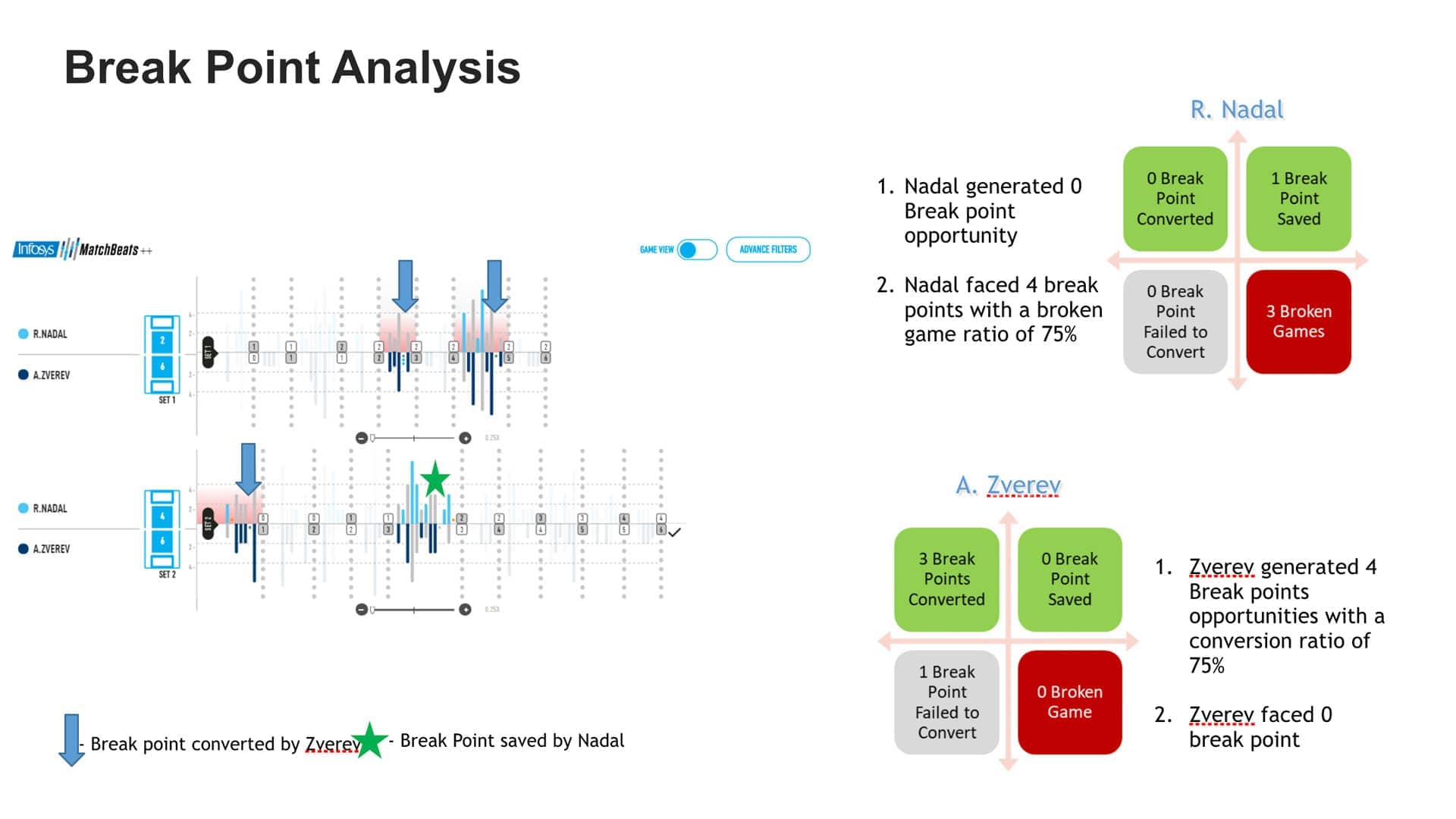 “The whole thing was about the serve,” Zverev said. “Obviously when I play this aggressive tennis, when I play this way, I have now beaten all three guys on this court, Big 3, so it shows that I can play very well and beat the top players.”

The 33-year-old Nadal is looking to finish year-end No. 1 for the fifth time and currently leads second-seeded Djokovic by 440 points in the battle for year-end No. 1. Djokovic faces fifth seed Dominic Thiem on Tuesday night.

Did You Know?
Zverev improved to 3-0 in opening group matches at the Nitto ATP Finals. He beat Marin Cilic in 2017 and 2018.

Last year’s champion triumphs 6-2, 6-4 & defeats Nadal for the first time in his career 👌