Rafael Nadal and Alexander Zverev meet for the sixth time in their FedEx ATP Head2Head series.

ATP Staff
This article contains:
Spaniard continues bid for year-end No. 1 on Monday

The fireworks are sure to fly on Day 2 at the Nitto ATP Finals, as World No. 1 Rafael Nadal battles defending champion Alexander Zverev, while debutants Stefanos Tsitsipas and Daniil Medvedev duel under the lights.

As Nadal enters his Group Andre Agassi opener with a 5-0 FedEx ATP Head2Head lead over Zverev, much is at stake for both competitors. The Spaniard has the year-end No. 1 ATP Ranking to play for this week at The O2, currently leading Novak Djokovic by 640 points in the ATP Rankings.

The top seed controls his own path to a fifth year-end No. 1 finish. If he wins his maiden Nitto ATP Finals title or reaches the final with an undefeated round robin campaign, he is assured of finishing the season at the top. It all starts on Monday for the 33-year-old.

Nadal, who is appearing at the season finale for a ninth time, is in search of his first crown at the prestigious tournament - the lone big title that has eluded the Manacor native. Despite having to pull out of the Rolex Paris Masters a week ago with an abdominal injury, he will take great confidence from another dominant campaign. He carries a 51-6 record into London, boasting titles in Rome, Roland Garros, Toronto and at the US Open.

You May Also Like: Scouting Report: 8 Key Things About The 2019 Nitto ATP Finals

Meanwhile, Zverev is hoping to return to the winners' circle with a second straight crown in London. The German, who qualified in the seventh position, is flying under the radar entering the tournament. He owns just one title - on the clay of Geneva - this year and is bidding for his first win over a World No. 1 since the final in London (d. Djokovic) exactly one year ago.

“As everyone probably knows I didn’t have the best season I wanted to have, but I’m still top eight in the world and made London,” said Zverev. “A lot of people would dream of that, so being with these guys is an unbelievable honour and I wanted to come back here and give myself a chance to retain my title. I want to play some good matches as well.”

The reigning champion is peaking at the right time, however, following a final finish at the Rolex Shanghai Masters last month. There, he earned his first Top 5 win of the year over Roger Federer.

Nadal and Zverev have had their fair share of battles over the years, including a five-set clash at the 2017 Australian Open and a tense affair in the Internazionali BNL d'Italia final in 2018. It was in the Rome championship that Zverev held a break lead in the deciding set, before a rain delay disrupted his rhythm and Nadal sprinted to the finish. That was their most recent meeting and both players will be seeking the upper hand as the series shifts to The O2. 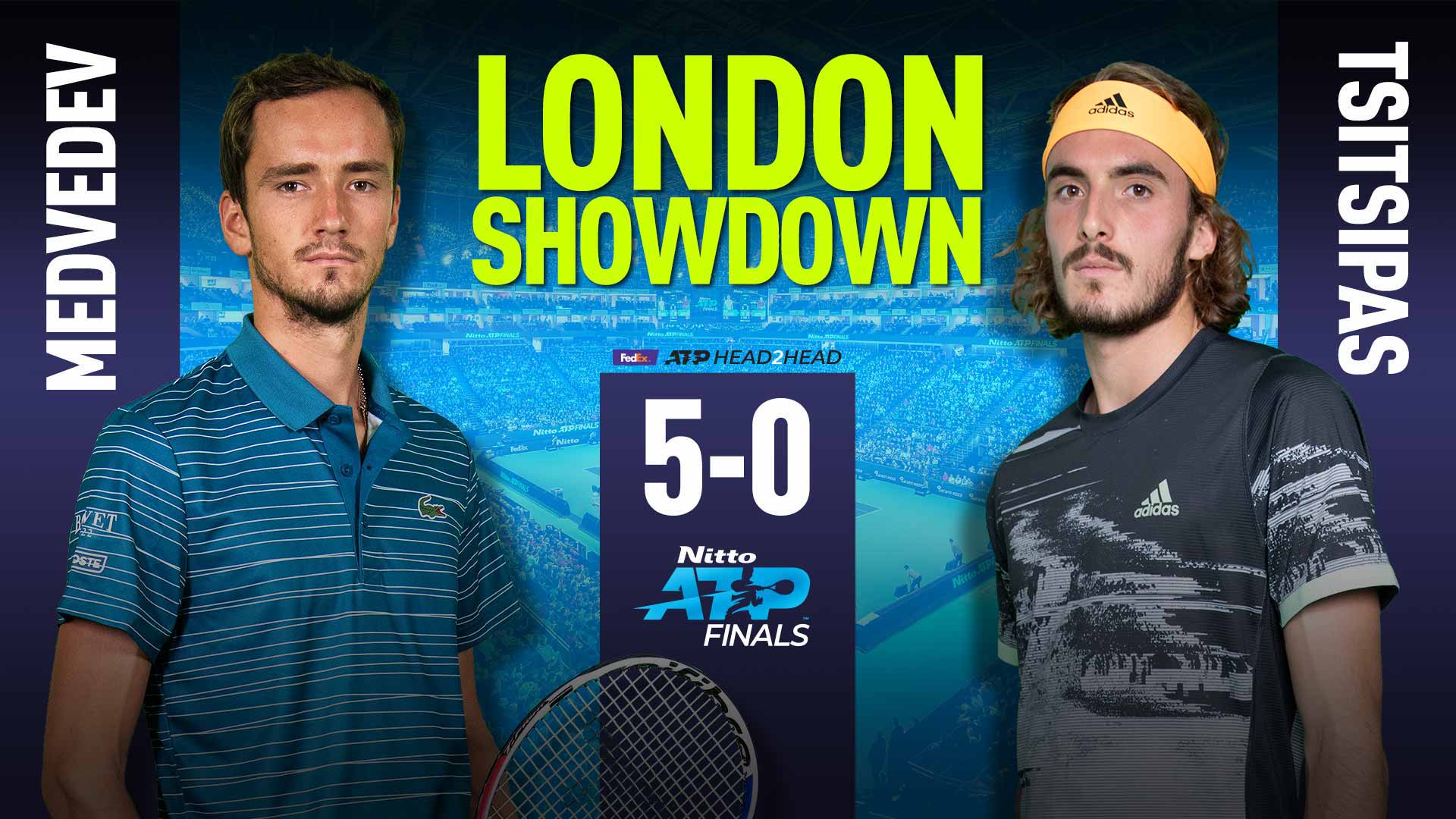 Also on Monday is a highly-anticipated clash between fourth seed Daniil Medvedev and sixth seed Stefanos Tsitsipas. Both the Russian and the Greek are making their Nitto ATP Finals debuts on the heels of breakthrough 2019 campaigns.

Medvedev and Tsitsipas have celebrated plenty of crowning achievements and contested many memorable matches this year, including a pair of clashes against each other. While the Moscow native owns a commanding 5-0 lead in their budding FedEx ATP Head2Head rivalry, Tsitsipas has given him a fight in both their 2019 encounters.

In April, Medvedev made a significant breakthrough at the Rolex Monte-Carlo Masters, where he survived a rollercoaster 6-2, 1-6, 6-4 battle against Tsitsipas to reach the quarter-finals. It marked just his second Top 10 win at the time.

Six months later, they met once again, but this time on the hard courts of Shanghai. Medvedev emerged victorious in a tight 7-6(5), 7-5 semi-final encounter, en route to his second ATP Masters 1000 crown of the year.

Medvedev will look for more of the same in London, following a breakout regular season on the ATP Tour. He has posted a tour-leading 59 match victories and not only lifted his first ATP Masters 1000 trophies in Cincinnati and Shanghai, but also finished runner-up at the US Open. He is already making history for his native Russia, becoming the first from his country to qualify for the Nitto ATP Finals since Nikolay Davydenko in 2009.

On the other side of the net, Tsitsipas is also appearing in London for the first time, having secured his 50th match win of the season a week ago at the Rolex Paris Masters. One year ago, the 21-year-old was hoisting the trophy at the Next Gen ATP Finals. It has been a smooth transition to the big show.

“I am very proud of myself to have put in a lot of effort and work to get here,” said Tsitsipas. “It’s a great transition from the Next Gen ATP Finals to here, both great events. It’s great being part of such a prestigious event with a long history in our sport."