Nick Kyrgios will face Karen Khachanov in the second round in Cincinnati.

Kyrgios: 'This Makes Me Happy'

ATP Staff
This article contains:
Aussie reflective after advancing to second round in Cincinnati

Nick Kyrgios consistently participates in kids’ clinics as he travels the world on the ATP Tour. At the Citi Open, the ATP 500 tournament he won two weeks ago, the Aussie spent a lot of time playing ping pong with any and all challengers.

And after defeating Italian Lorenzo Sonego on Monday at the Western & Southern Open in Cincinnati, Kyrgios handed a young girl behind his bench a signed ball, her mouth left agape with happiness. Kyrgios saw the moment on Twitter shortly thereafter and commented, “This makes me happy”.

“I have always been pretty nice to, I feel, generally to people and to kids. I have been doing kids clinics for Tennis Australia when I was young. I was just brought up like that, to be honest. I don't care if you're a CEO of a company or a janitor,” Kyrgios said. “I'm going to speak to you the same way. I love doing [clinics]. I think that's what it's about. It's about giving kids belief that they can be in this position one day.”

Kyrgios certainly put on a show for the kids and everyone in attendance at this ATP Masters 1000 tournament, even taking a bow after a stab backhand volley in the second set against Sonego. The Italian got in on the fun as well during his last service game, winning an epic point that featured a Kyrgios tweener before trying to rally the crowd to his side.

Although Kyrgios did not face a break point, it was not an easy match. Up until 5-5 in the opener, Sonego was unblemished on serve, too. But a quick drop in level was all it took to give the Aussie the break in the first set. The same held true in the second set. Otherwise, Sonego was going after his shots and holding his own.

“I feel like when guys play me they go out there and try and play their best level,” Kyrgios said. “They try and keep things on their racquet and redline.”

Bringing the best out of your opponents because of the atmosphere of a match might not always be the best idea. But it’s something that Kyrgios enjoys.

“Honestly I wish they'd just roll over and it was a 6-1, 6-1 job,” Kyrgios said, smiling. “No, it's a lot of fun. Obviously just from that match I can see his strengths, his first serve and his forehand, looks to run around and dictate… I think the strengths of all my opponents come out when they play me. That's pretty cool.” 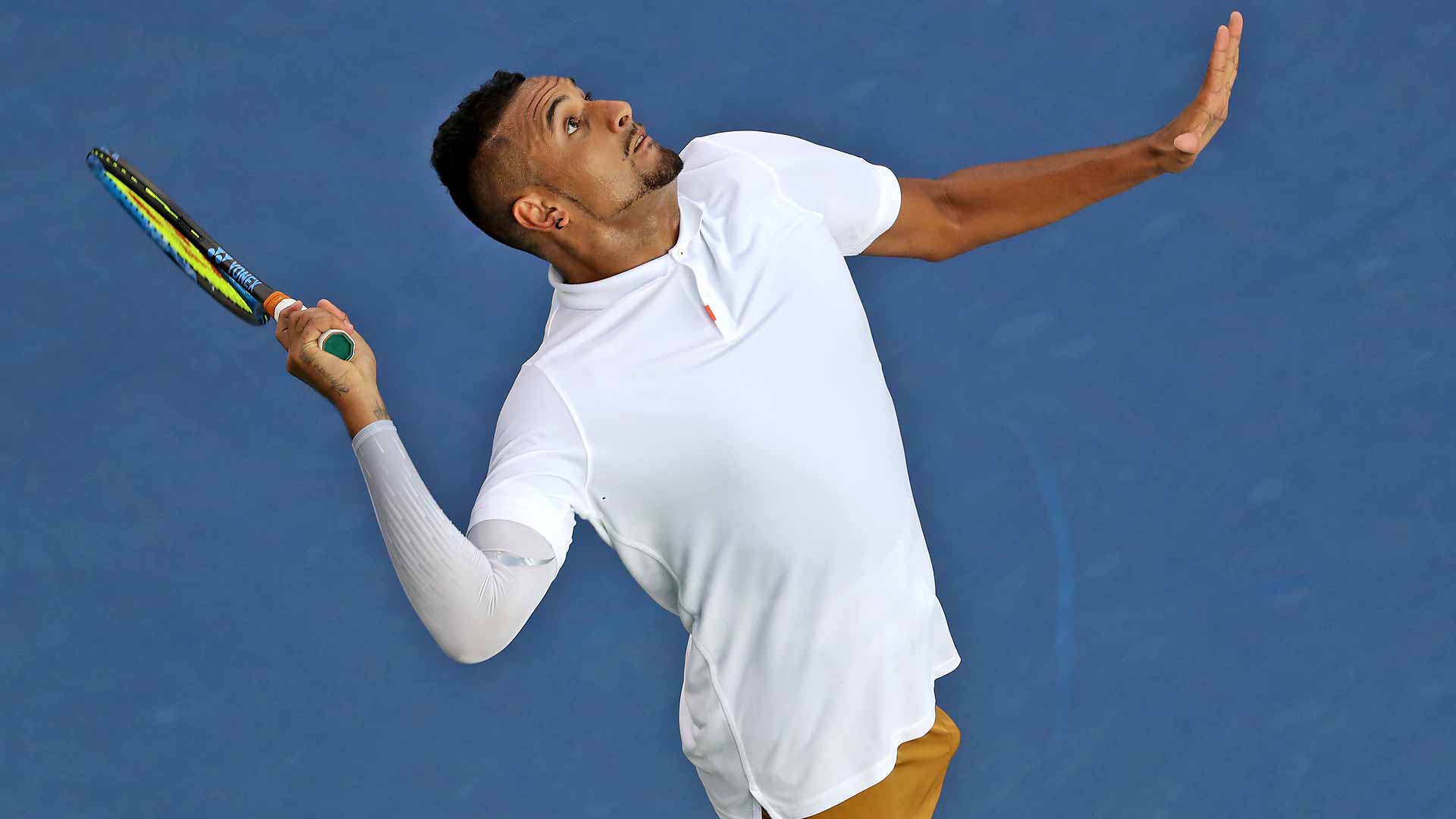 In the next round, Kyrgios will face one of the biggest hitters on the ATP Tour in Karen Khachanov, who made the semi-finals last week at the Coupe Rogers in Montreal.

“I'm going to try to keep things on my own terms, but again, I'm not going to think about it,” Kyrgios said. “I have some doubles tomorrow with the birthday boy. See how it goes.”

Kyrgios is partnering reigning Next Gen ATP Finals champion Stefanos Tsitsipas on the doubles court for the second time. And just like they did at the Citi Open in Washington, D.C., the Australian-Greek tandem will face top seeds Juan Sebastian Cabal and Robert Farah in the first round. Monday is Tsitsipas’ birthday, too.

“I actually didn't get him a present. I didn't know until I saw it on Twitter this morning, but I don't know. I might get him something small tomorrow,” Kyrgios said, before cracking a smile. “Maybe a shoelace or something.” Read More: Stefanos Seeks A Better Paire