Andrey Rublev and Jerome Kym pose after a training session at the Nitto ATP Finals.

Andrew Eichenholz
This article contains:
Kym and Banerjee reflect on being hitting partners

The best players in the world are in action at this week’s Nitto ATP Finals. While the attention is on the likes of Novak Djokovic and Daniil Medvedev, two 18-year-olds have been an invaluable part of the season finale.

Teens Samir Banerjee of the United States and Jerome Kym of Switzerland are this year’s participants in the Nitto ATP Finals Junior Hitting Partner Initiative, which since 2016 has brought some of the world’s top juniors to the year-end championships to serve as practice partners for the stars.

“To play with the eight best players in the world, there is nothing more special than to play with those guys. I’m really happy that the ATP gave me this chance to know a new world,” Kym said. “They go to practice to learn new things, on every ball they have a discussion about what they did wrong and what they can do better.”

You May Also Like: Retirees Honoured At 2021 Nitto ATP Finals

Kym has enjoyed the long hours of training each day and doing his best to prepare the competitors well. He certainly has not been surprised by the stars’ level and focus, and he has enjoyed conversations with them

“I was surprised with the personalities from [Matteo] Berrettini and [Andrey] Rublev, because they saw me not just as a hitting partner, but also as a normal person,” Kym said. “They asked where I’m from, the hobbies I have and other questions. I’m happy they see me as a person, not just a hitting partner. [Novak] Djokovic also gave me some advice for my serve, what I can do better on the second serve.”

One of Kym’ biggest weapons is his serve. The 6’6” right-hander is able to crush his serve, but Djokovic advised that mixing it up is important.

“He told me that with [speed] it’s easier for him to get the ball back deep in the court [that way],” Kym recalled. “He told me to try two or three times in the game where the ball needs to bounce high, because then he needs to play over his shoulder. I have time to prepare for the next shot and then that will make my game easier.” 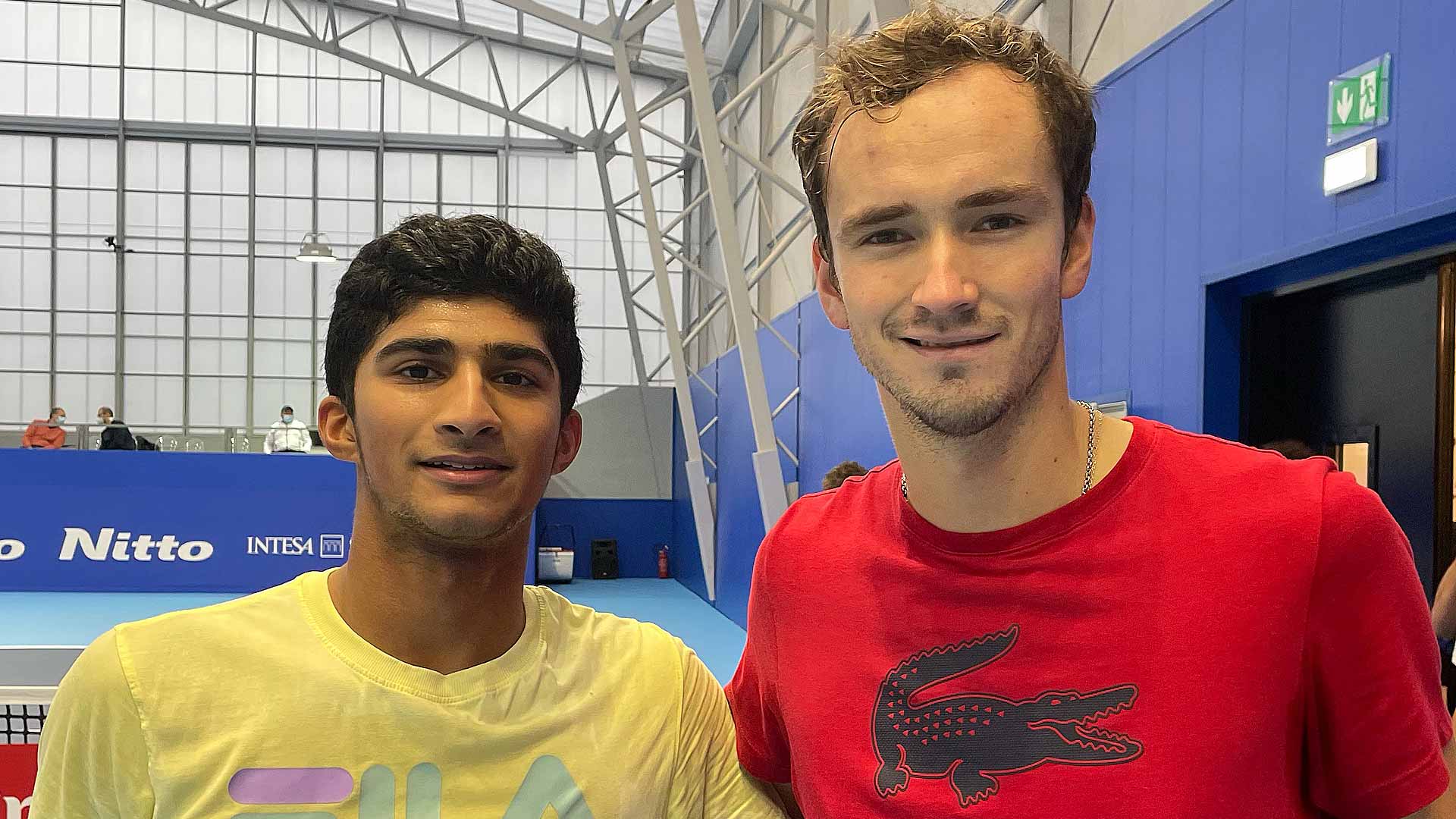 Banerjee, who won this year’s Wimbledon boys’ singles title, was particularly interested in a tip he got from defending champion Daniil Medvedev.

“I was talking to Medvedev a lot. He said everyone at this level is good, not even in the top eight, but in the Top 200, 300, everyone is pretty much at the same level. It just comes down to smaller things,” Banerjee said. “He said obviously there is a bit of luck involved, but it’s how you prepare, how you approach every week. He said some guys lose first round three, four weeks in a row and then they win a tournament. He said he was just very consistent, he made semis, semis, finals.

“I think each of their journeys is pretty unique and they all got to this stage with unique game styles and unique personalities.”

Banerjee will attend Stanford University next fall. He will arrive on campus with invaluable experience from Turin.

“It’s been great. Just being able to hit with all these top guys, seeing how they conduct themselves, how they run their practices, how they prepare for matches, how they are in the locker rooms, it’s pretty cool,” Banerjee said. “It’s something I didn’t think I’d be able to see.”

ATP Chief Tour Officer Ross Hutchins said: “Since 2016 we have been delighted to invite some of the world’s best juniors at the Nitto ATP Finals as practice partners. Interacting with the best players in the world and experiencing elite-level tennis first-hand is incredibly important for player development and progression. Many of the juniors we have hosted have gone on to make an impressive mark on the Tour. Jerome and Samir have done an oustanding job this week and I’m confident it’s an experience they will never forget.”