Superstars from all over the sports world came together in Dallas, Texas this weekend at the Southern Methodist University tennis complex for the fourth annual Dirk Nowitzki Pro Celebrity Tennis Classic, hitting aces — literally and figuratively — to raise money for the Dirk Nowitzki Foundation, which awards grants annually to organisations focusing on children’s wellbeing, health and education.

“We’re thrilled to do this event again and have the support of celebs who fly in from across the country,” Nowitzki said. “Tommy Haas actually took a redeye to be here. He landed at like 7am, so the support from everybody means the world and hopefully we can raise a lot of funds again for our project this upcoming year.”

Nowitzki, a basketball legend in his own right, played his fair share of tennis growing up in Germany. And his former Dallas Mavericks teammate and two-time NBA Most Valuable Player, Steve Nash, has taken up the sport more recently. The Canadian has taken great pride in watching #NextGenATP stars Denis Shapovalov and Felix Auger-Aliassime blossom on the ATP Tour.

“Both Denis and Felix have big, big games. [They’re] great athletes who have a lot of shots. Both I think have incredible futures,” Nash said. “The best players are the ones that get on top of their game mentally. Those young players are showing great signs. They have all the tools, and if they just continue to develop that grit and understanding, they’re going to be Top 5, Top 10 players in the world, easy. 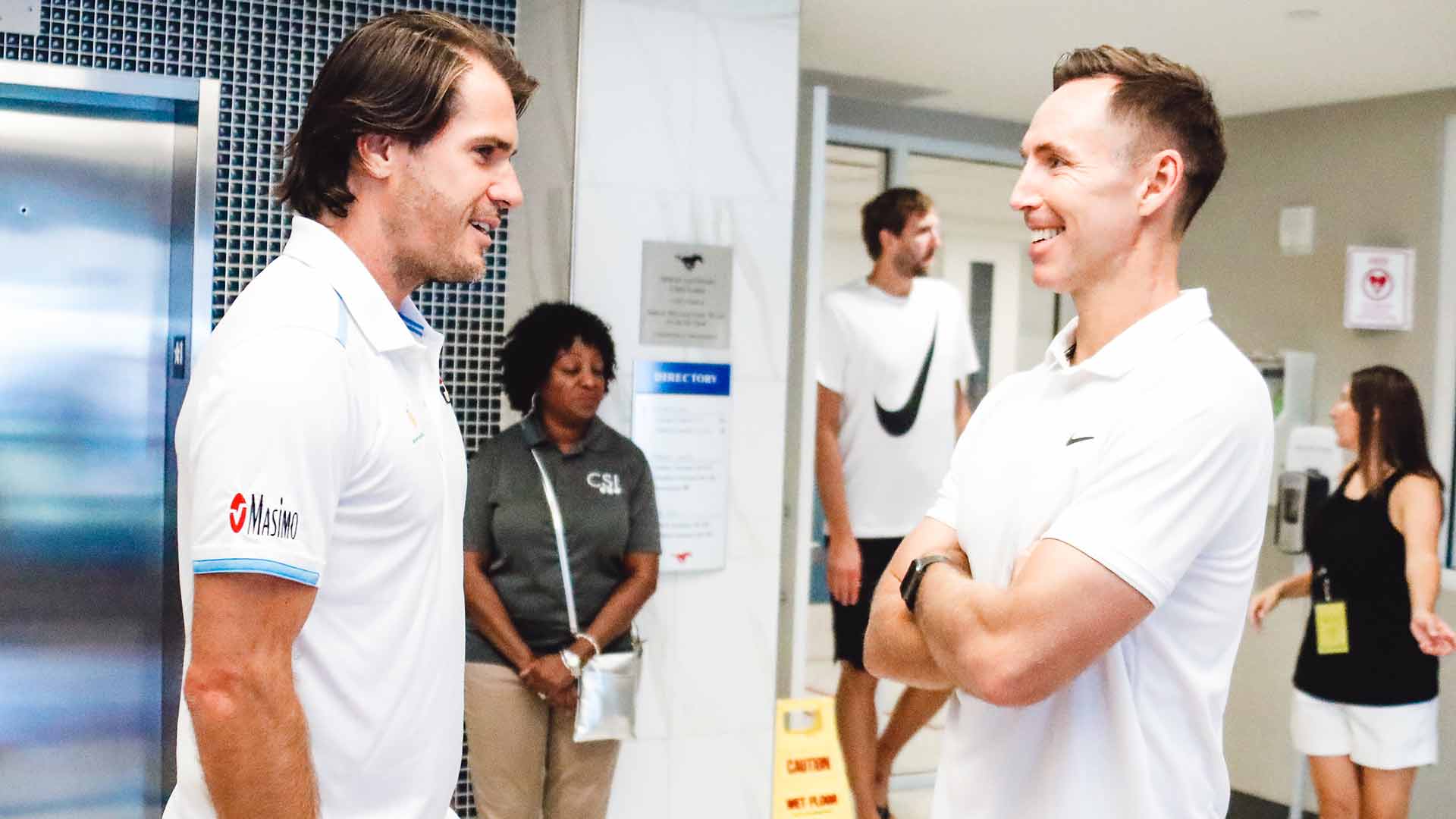 When Nash retired, he wanted to find other activities outside of basketball. So he joined a tennis club and has gotten increasingly interested in the sport since.

“The past couple of years i’ve been trying to learn the game. It’s a beautiful sport,” Nash said. “Obviously there are tons of levels to it, so I’m just trying to hold my own and get better and better.”

Isner has been in the year-end Top 20 of the ATP Rankings for nearly a decade (2010-18), so the American knows tennis talent. The 34-year-old was impressed by the basketball stars — which included Rookie of the Year Luka Doncic — and the other celebrities who were competing.

“I would say [they are] very good. Dirk is an incredible player. He grew up playing tennis. You can see that and you can see he still has all that talent and skill left in him,” Isner said. “Luka I think is still brand new to tennis. But from what I’ve seen he’s an athlete and athletes pick stuff up quickly and that’s what he’s doing.”

As far as tennis players go, Isner was joined by former World No. 2 Haas, former doubles World No. 1 Mark Knowles and American Mitchell Krueger. Nowitzki was ecstatic with the support, and he was thankful to have Isner on the courts a year after the 15-time ATP Tour titlist had to miss the event for the birth of his daughter, Hunter Grace.

“It means the world to me and to us and to the tournament that we have a player of his stature here and that he’s representing,” Nowitzki said. “That’s big. To have him here, close, and be a resident here now is awesome. He’s a friend and it’s amazing.”

Haas and his amateur partner eventually won the tournament, defeating Nash and his partner 10-6 in a championship tie-break.