Benoit Paire has climbed as high as No. 18 in the ATP Rankings.

Above all else, Benoit Paire wants the world to know one thing about him — he is human.

Sometimes, like on Thursday when he defeated Grigor Dimitrov to reach the third round of the Australian Open, life is great. The Court 3 crowd was enthralled by his stunning shotmaking. Fans roared their approval throughout the four sets, and Paire could only smile after he clinched his first berth in the third round of a major since Wimbledon in 2019.

The 32-year-old cried tears of joy during an on-court interview. Paire lives for entertaining. Mix that with great tennis and the result was a perfect day at the office.

“I feel very happy. It was a good match today. [For a] long time I didn’t win any matches in Slams,” Paire said. “I think mentally I was very good today, so I’m very proud of myself.”

The Frenchman is well aware he is imperfect and that his days at the office have not always been so sweet. In 2021, Paire struggled to a 13-30 tour-level record. The former World No. 18 can compete with some of the best players in the world on his day. But on some occasions, he admittedly does not have it physically or mentally.

In Paire’s mind, he is no different from you. Everyone has bad days at the office, right?

“I really like tennis. I really like to be on court. I don’t like to practise, but I just like to be on court,” Paire told ATPTour.com. “I love the support and the crowd and everything. That’s why for me at this time [during the pandemic], it was a bit complicated to play in front of an empty stadium. For me, it’s a little bit more difficult maybe than [for] other players.” 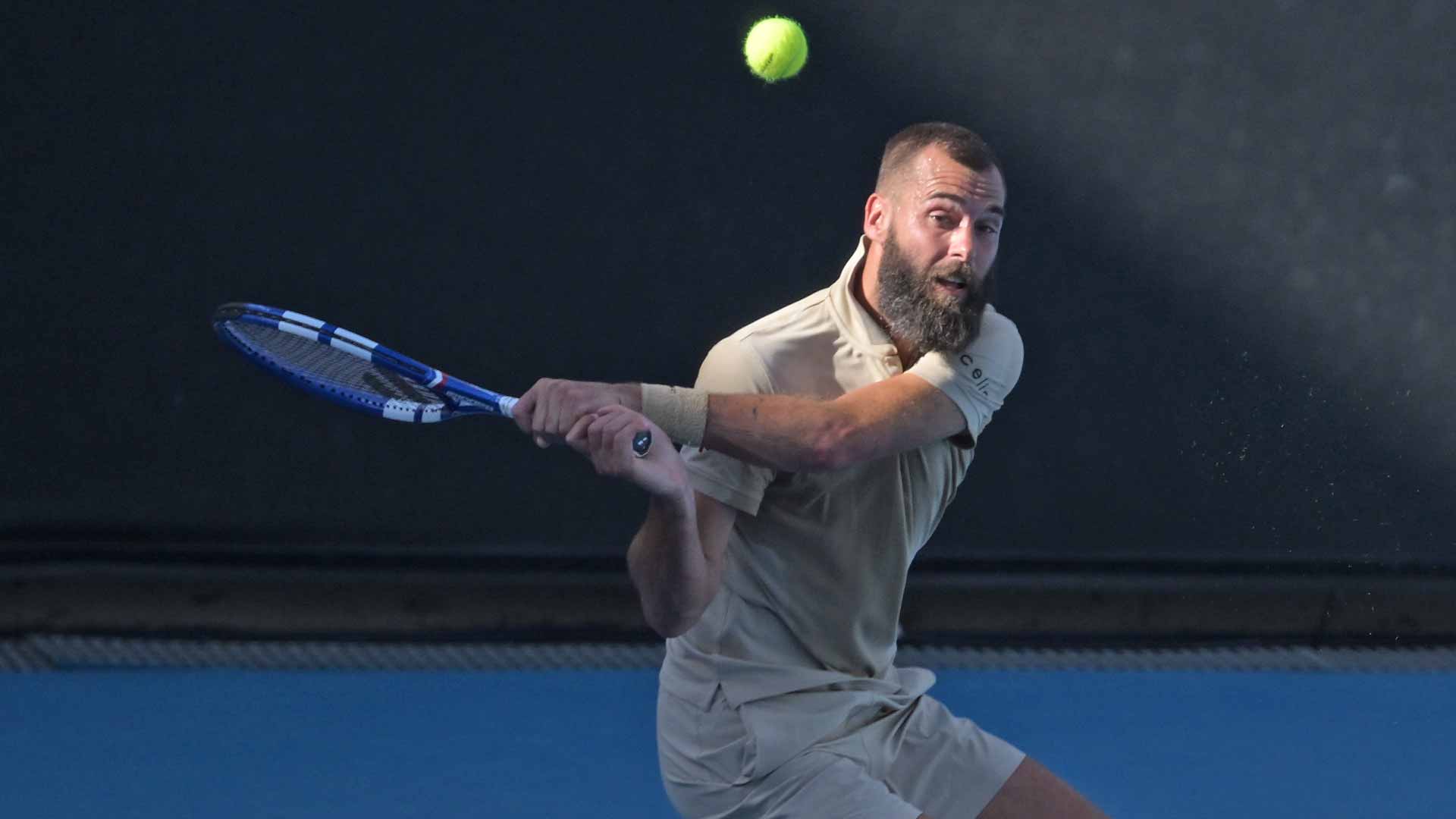 Photo Credit: Peter Staples/ATP Tour
Sometimes Paire’s shot selection on court borders on inexplicable. The Frenchman might be the only player on the ATP Tour who is more comfortable hitting a half volley between his legs or trying to carve a drop volley that bounces back to his side of the court than he is punching the ball into the open court.

But when Paire is at his flying best and those shots work, the crowd loves it. And there is nothing Benoit loves more than making fans happy.

“I think people come to see me just for this. I have to do it, even if I miss. I have to try. I think it’s good. Even if I miss, I want to enjoy and have fun on court. That’s the only thing I want,” Paire said. “I have a connection with the people. I want people to leave the stadium and be happy. Even if I missed or if I lost the match, I want people to go home and say, ‘Oh, did you see what Benoit did? It was crazy or I want to try it!’ That’s what I like.”

Outside of forehands and backhands, Paire will be the first to admit he loses focus more often than most. On those “bad days”, that is even clearer.

“Some people like me and some people really hate me. The people who like me, they say, ‘Okay’. The people who enjoy playing only once a week who make a match with a team in France, they say, ‘Okay we all like Benoit. We like to enjoy, we have a beer after the match’,” Paire said. “Most of the people say, ‘Okay, he’s not serious enough to be a professional tennis player, he’s not thinking enough about tennis.’ But what can I say? It’s my life.”

Paire does not ask people to accept his every move. But he would like fans to keep things in perspective.

“I think people sometimes forget we are just humans," Paire said. "We just like to enjoy life. We just like to be with family. We like to visit the country a little bit. For me, that’s how I am."

One way Paire differentiates himself has nothing to do with his tennis. He has changed his hair colour several times over the years. Right now, it’s his typical dark colour. Once in a while, he’ll turn blonde. Sometimes he goes with something different, like pink.

“[I am] like every person. When you want, you do something. For me, it’s the same. The problem for me is it’s on TV and everybody knows. That’s the difference. People do the same at home, but for them there is no impact,” Paire said. “For me, the difference is when I do my hair blonde or something and I arrive at Roland Garros, people say, ‘Okay, he’s crazy. He changed his hair.’ But that’s what I like. I did pink one day and I really enjoyed it.” 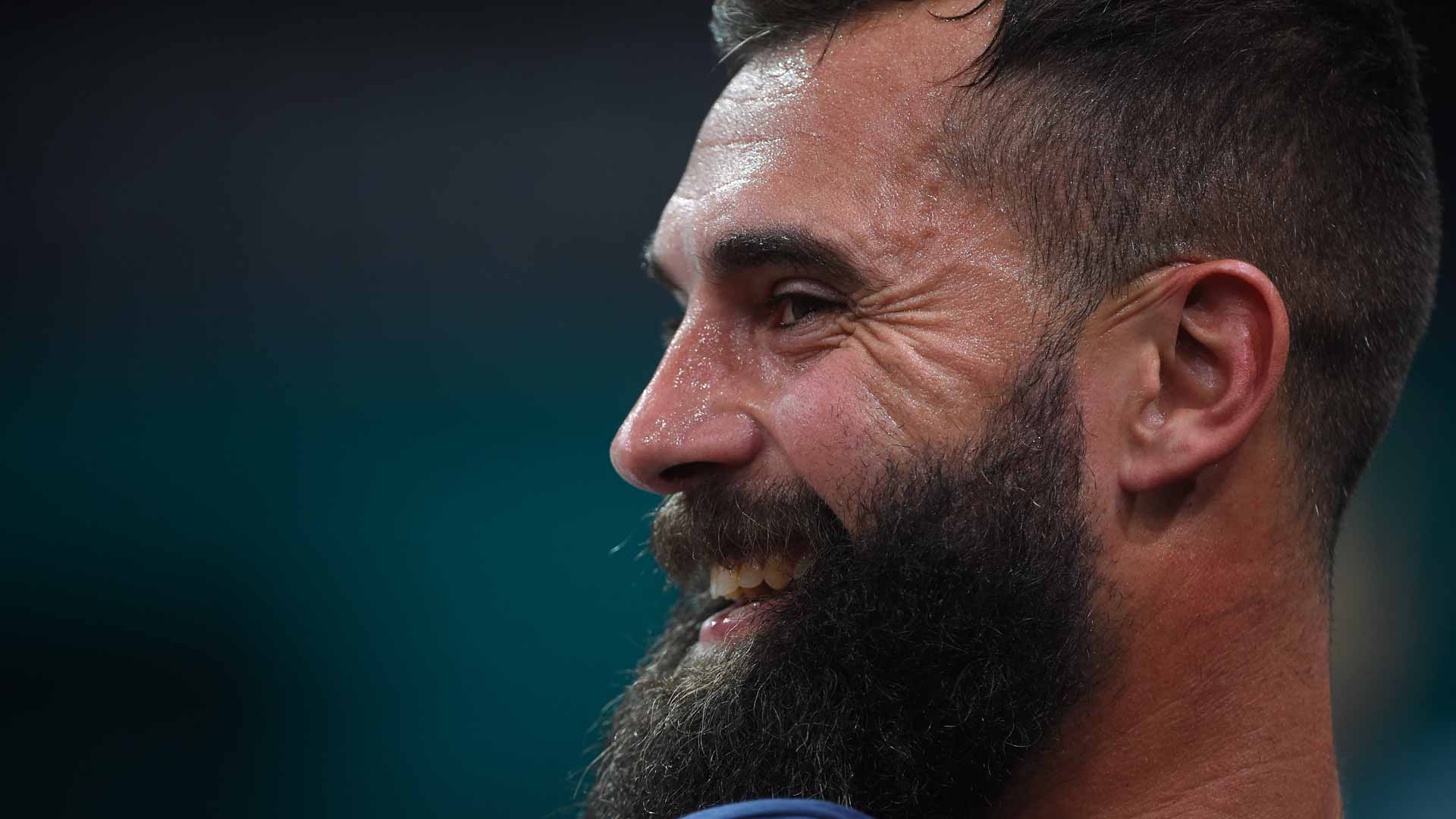 Photo Credit: Corinne Dubreuil/ATP Tour
According to Paire, he gets the same question from almost everyone he comes across: ‘Benoit, why do you have a big beard?’ The truth is, the Frenchman says he doesn’t know. But because he is a public figure, he is asked more than most.

“Honestly, being on TV is not a problem for me. I like it,” Paire said. “I have some people who are fans of me, so for me I really enjoy it. I can’t complain about it. I have no problem being on TV and to change my hair colour, no problem.”

In fact, Paire embraces that. He does not see himself as a celebrity. If someone he comes across randomly in the street is kind to him, why wouldn’t he be kind back?

“If you want to say hello and take a picture, I will never say no,” Paire said. “Why? I’m normal."

Paire's perfect day has nothing to do with tennis. If Benoit had his way, he would play football with friends, have an Aperol after work and then make a barbecue with his friends (he will take a burger). “Like normal people do,” he said.

The Frenchman also does not filter what he puts on his social media. If he is at the pool relaxing with a drink, he is unafraid of posting that. Paire wants fans to see him as he is.

“People see me sometimes a little too relaxed and too much enjoying life and they say it’s because you made a party or you drank red wine or a beer. That’s why you lost in tennis. No,” Paire said. “For me, if I don’t do this, for sure I’m going to lose because I don’t feel good. I’ve won three titles, I was No. 18 in the world. I’m a tennis player.

“I’m more focussed for sure on my tennis when it’s a tournament. I don’t make a party before my match or something. But I like to just be like a normal human who visits a country or a different city.”

Paire would be happy to remain in the sport after his playing career ends. Okay, he would like at least a couple of years off. But the Frenchman can envision himself on Tour as a coach.

“If someone needs help and they come to see me and it’s a good project, why not?” Paire said. “I like tennis, so why not be on Tour? The only thing is maybe I will be too strict. I will be the opposite of [the way I am now]. Let’s see.”

For now, Paire will focus on his third-round match at the Australian Open against fourth seed Stefanos Tsitsipas on Saturday in Melbourne. The Frenchman will do his best to give the crowd a show. He will certainly be himself.

“I am like you, and I want to show I am like you,” Paire said. “It’s not because I am a tennis player and I won money and tournaments that I’m not like you. I am exactly like you.”