Pete Sampras and Boris Becker played one of the greatest finals in tournament history in Hanover in 1996.

25 Years Ago: Sampras, Becker Light Up Hanover With Epic Final

“Yeah,” says Sampras from his home in Southern California, voice trailing off.

In the gathering silence, you can almost hear the sound of his brain reaching back across all those years to the 1996 Nitto ATP Finals at the raucous Festhalle in Hanover, Germany.

“Boris on a pretty fast court, he felt he could potentially serve me off the court and take the racquet out of my hand,” Sampras remembered. “He was just an imposing figure, a big guy with his crowd behind him. I’m not only dealing with a great player on a fast surface, I’ve got 15,000 Germans rooting against me.”

Sampras, now 50, laughed at the memory of that horrifying start.

The American came into Hanover in the prime of his career. Thomas Muster had wrested the No. 1 FedEx ATP Ranking away from him briefly – for all of six weeks – and Sampras was in the midst of a 102-week run at the top. He was the No. 1 seed, joined by Michael Chang, Yevgeny Kafelnikov, Goran Ivanisevic, Muster, Becker, Andre Agassi, Richard Krajicek and alternate Thomas Enqvist.

Sampras opened his round-robin play in the Red Group with a 6-4, 6-4 win over Kafelnikov, the 500th of his ATP career. The No. 6-seeded Becker was next, and he had the advantage of momentum; less than a month earlier, the German had beaten Sampras in a thrilling five-set final at the ATP Masters 1000 in Stuttgart. This time, Becker won a thriller, 7-6(10), 7-6(4).

“It was a level I haven’t reached probably ever in my career,” said Becker.

“I like the round-robin format,” he said, presciently, as it turned out. “It’s exciting for the fans and it leaves a bit of suspense. If things don’t go well on the day, there’s usually another chance.”

After Sampras dispatched Enqvist 6-2, 6-1 – when Agassi withdrew – those chances presented themselves. Ivanisevic didn’t go easily in the semi-finals but Sampras prevailed 7-6(6), 6-7(4), 7-5. 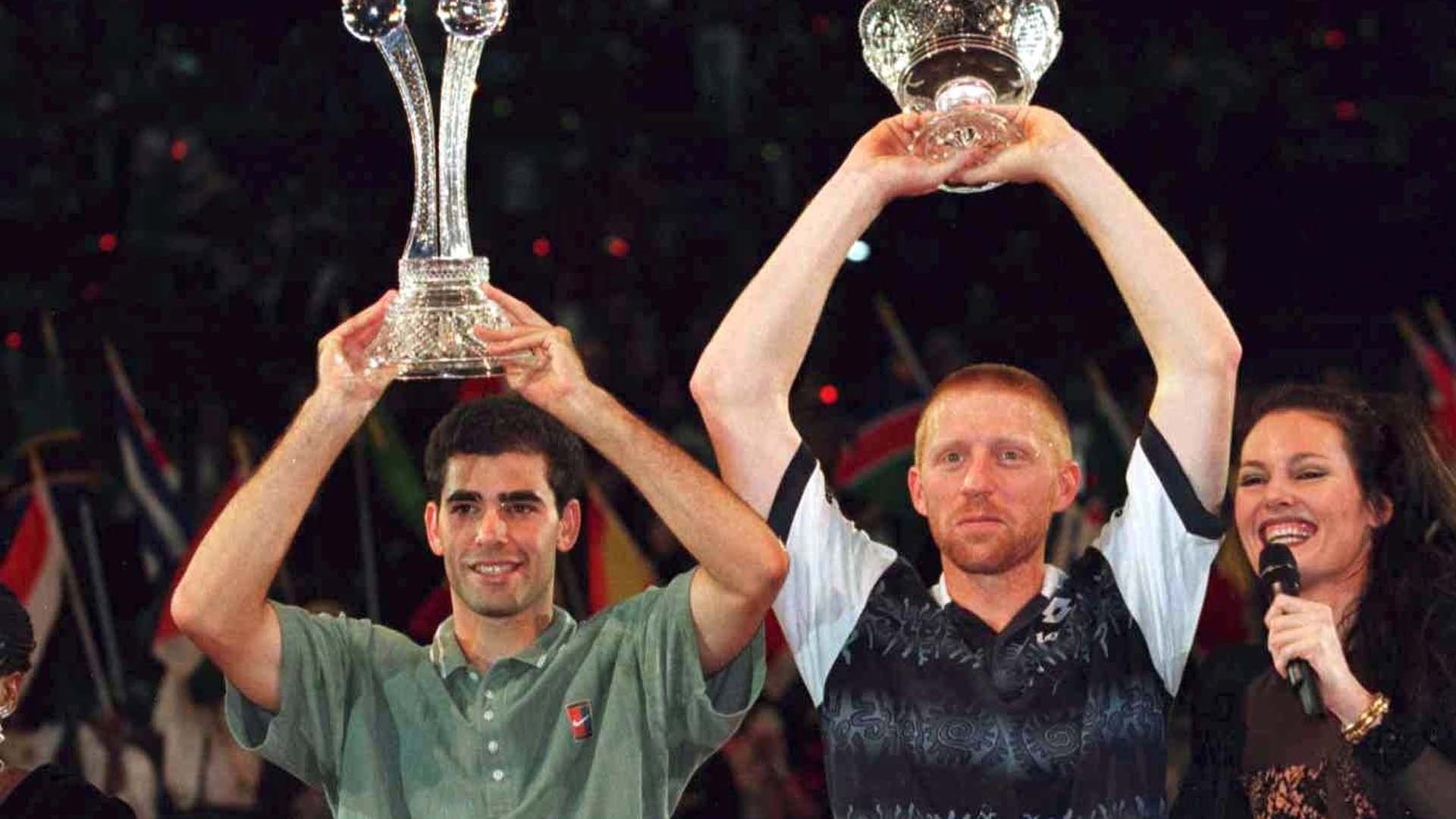 “It’s like a war between two servers,” Ivanisevic said, “and then somebody has to crack – and I did.”

The Festhalle, packed to its 15,600-seat capacity, was crackling when Becker came out to the “Rocky” movie theme.

Sampras, in the wake of those four aces off the top, went on to lose the first set 3-6 – by far, his worst showing of the week. He came back to win tense tie-breaks in the second and third sets.

“During the first set, he was playing the best tennis I have played against,” Sampras said afterward. “Then once I won the second set, as far as the crowd, they kind of calmed down a bit. I felt the momentum change.”

Two points from the match in the fourth set, Sampras watched helplessly as Becker escaped with an ace. The German ultimately won a tie-break 13-11 when a Sampras forehand skewed long.

Becker’s incandescent serve hadn’t been broken by Sampras in 27 tries, but the 28th proved different. A backhand winner down the line at 30-40 created the decisive break and Sampras served it out, appropriately winning after a 24-shot rally.

The heartfelt embrace at net was worthy of the four-hour match. 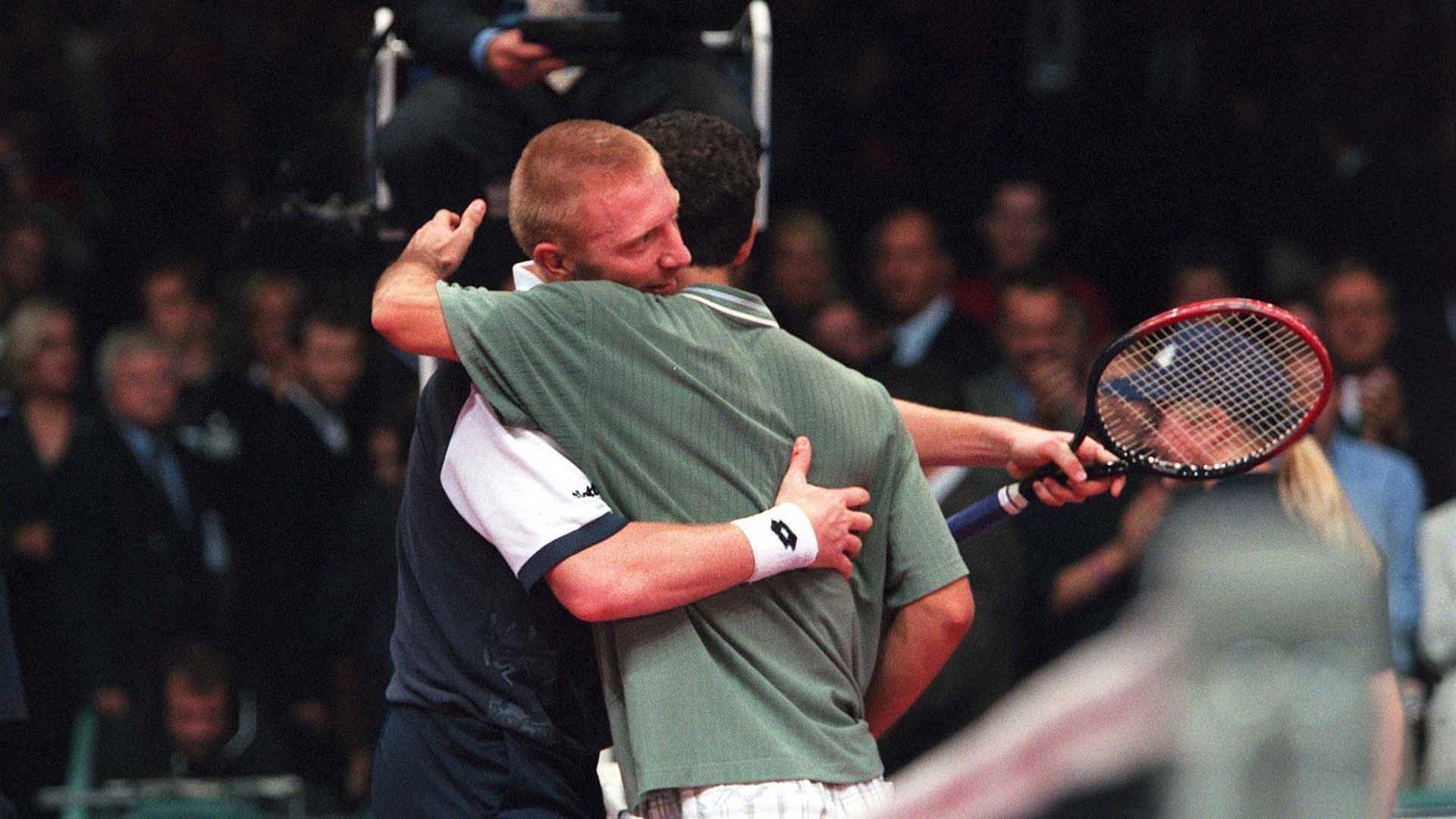 “The respect that we had for each other, and that embrace at the end of the match was pretty cool,” Sampras said. “I’ve always had a friendly rivalry with Boris and that match was the pinnacle of our careers.

“Two heavyweights, playing great at the same time, and it came down to the wire,” Sampras said. “We played a couple of really tight points, tight games and I managed to squeak it out at the end. One of the best matches I’ve ever been a part of, a match I’ll never forget.”

“It just shows how incredibly close the whole match was,” Becker said afterward. “I cannot blame myself. To be part of such a match is one of the highlights of my career. It has been a great fight. Thanks, Pete, for being such a great competitor.”

For the week, Sampras played 14 sets – and seven of them required tie-break. He took home $1.34 million for his effort.

“It’s not the money, not at all,” Sampras said at the time. “It’s the great matches. And this was one of the best matches I have ever been a part of.”

Twenty-five years later, Sampras sounded exhausted in the recounting of the match.

“As far as ATP Finals are concerned,” he said, “I think it will probably go down as one of the best ever.”