The Aussie wild card faced back-to-back match points at 4-5, 15/40 in the fourth set and 4/6 in the fourth-set tie-break, but he held his nerve to advance to the second round for the third straight year after three hours and 43 minutes. Popyrin struck 50 winners to become the first wild card to defeat Goffin at a Grand Slam (1-5).

Last year, Popyrin claimed his only two tour-level victories of the season en route to the Australian Open third round. The Aussie has already surpassed that mark in 2021, after picking up back-to-back wins against Borna Gojo and Tommy Paul at last week’s Murray River Open.

Popyrin has claimed three victories against players who have reached the Top 10 in the FedEx ATP Rankings at this event. This time, he was able to fully celebrate his victory. Popyrin led Dominic Thiem 7-5, 6-4, 2-0 in 2019 and Jo-Wilfried Tsonga 6-7(5), 6-2, 6-1 last year, before both players were forced to retire with injuries.

Popyrin will meet Lloyd Harris of South Africa in the second round. The 23-year-old rallied from a set down to beat Danish lucky loser Mikael Torpegaard 4-6, 6-3, 6-2, 6-2.

Popyrin was not the only Aussie to make it through to the second round on Day 2. After missing last year’s Australian Open due to an abdominal injury, Alex de Minaur charged past two-time quarter-finalist Tennys Sandgren 7-5, 6-1, 6-1 on his return to Melbourne Park. 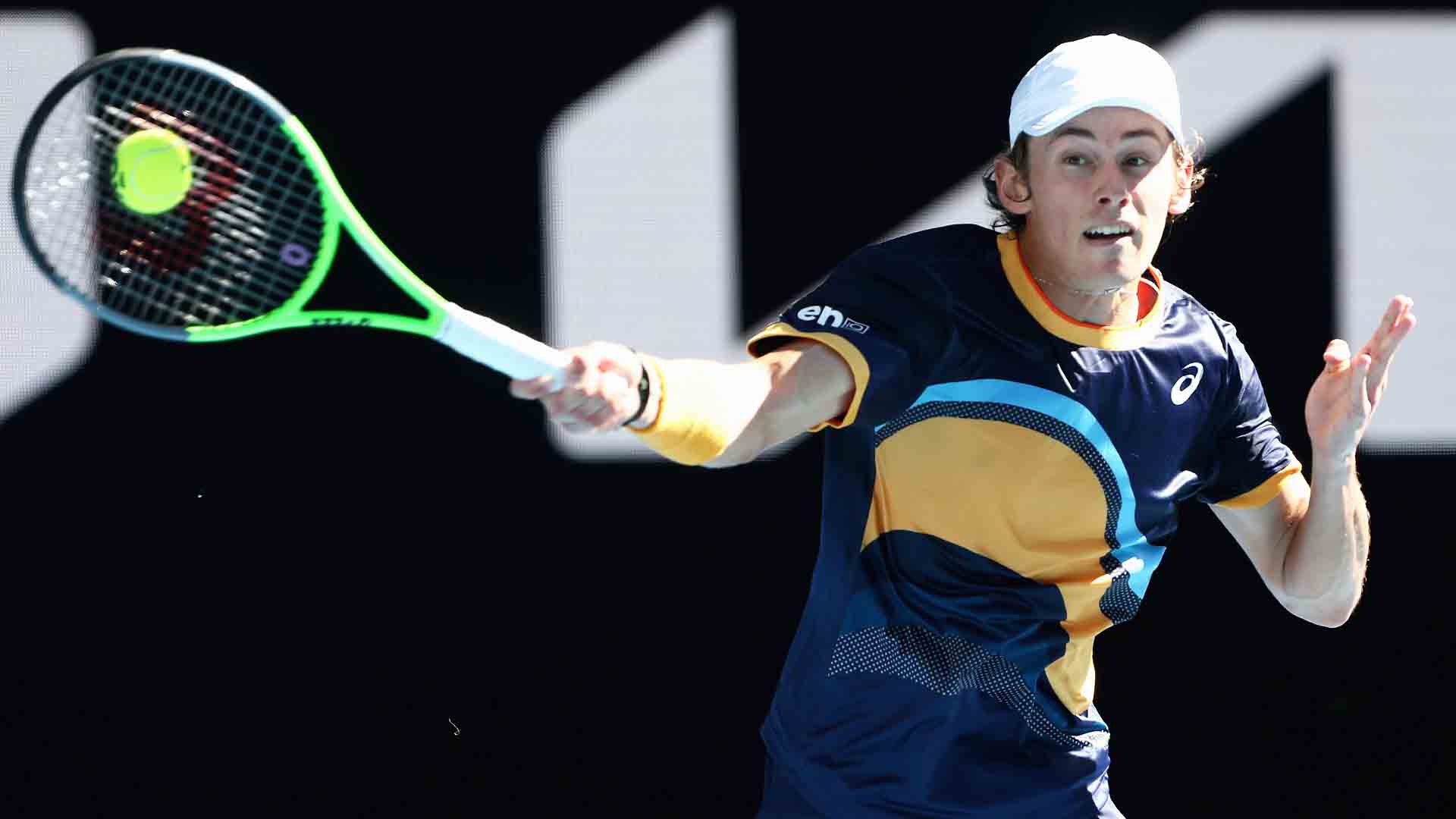 De Minaur won 86 per cent of first-serve points (37/43) and did not face a break point en route to a one-hour, 48-minute victory. Sandgren, who held seven match points against Roger Federer in last year’s quarter-finals, was aiming to improve his 4-1 record against Top 30 players at the opening major championship of the year.

“I truly believe what we're doing in Australia… We've got so many [players] knocking on the door and so many in the Top 100, so I think we're in a great spot,” said De Minaur. “It definitely does motivate me because I know that we've got all these teammates pushing top players. It's amazing to see.

”We've got Christopher O'Connell beating his first Top 40 opponent in Jan-Lennard Struff, [who] played an unbelievable ATP Cup. We've got Popyrin, who just beat Goffin. I think it's truly exciting. It's exciting times, and it's amazing. Us Aussies, we always seem to play really well here in Australia. Now it's time to hopefully take this momentum with us and go conquer the world.”

You May Also Like: A Straight-Sets Win: Just What Nadal Ordered At The Australian Open

De Minaur will face Pablo Cuevas for a spot in the third round. The Uruguayan converted all six break points he created to defeat Andreas Seppi 6-4, 4-6, 6-2, 6-2 on Court 6.

“[Pablo is] a very tough opponent, very solid. He's going to make me play a lot of balls,” said De Minaur. “It's another tough match, similar in ways [to this match]. I'm going to have to try and focus on my side of the court and do what I have planned and try to execute.”

Thanasi Kokkinakis joined his countrymen in the second round with a 6-4, 6-1, 6-1 victory against Sonnwoo Kwon. The 24-year-old landed 19 aces and converted six of seven break points to defeat the South Korean in one hour and 33 minutes. Kokkinakis will face 2019 semi-finalist Stefanos Tsitsipas for a spot in the third round. The World No. 6 broke serve on seven occasions to charge past Gilles Simon 6-1, 6-2, 6-1 in one hour and 32 minutes.

Unranked Aussie Li Tu fell short in his bid to join Popyrin, De Minaur, O’Connell and Kokkinakis in the second round, but the wild card produced an impressive performance in his 6-7(1), 6-4, 7-6(4), 6-4 loss to Feliciano Lopez. The 24-year-old, who played his first tour-level match since 2014 at last week’s Murray River Open, struck 44 winners to 33 unforced errors in his Grand Slam debut match.