Feliciano Lopez lifts his third grass-court trophy and first at The Queen's Club.

Feliciano Lopez completed a magical run to the Aegon Championships title, saving one match point in a thrilling deciding tie-break. He edged fourth seed Marin Cilic 4-6, 7-6(2), 7-6(8) on Sunday afternoon at The Queen's Club.

"It's the best week of my career, I would say," Lopez told the assembled media following the match. "To win this tournament at this stage of my career, this is so amazing. I was waiting so long to win this title. Queen's is the best. Outside of the Grand Slams, this is one of the most special tournaments. You feel the atmosphere here, all over the years, a tradition that this tournament, the players that have won in the past. For me to be here on Sunday holding the trophy, it's the best feeling I can have."

Runner-up in 2014, Lopez notched his third ATP World Tour title on grass and sixth in total. Sunday was a special day for the elder statesmen on the circuit, with fellow 35-year-old Roger Federer also emerging victorious at the Gerry Weber Open in Halle. With 36-year-old Victor Estrella Burgos also winning in Quito, it marks the first time since 1975 that three players aged 35 & over have won titles in the same season.

Lopez is the third player to save a match point in an ATP World Tour final this year, joining Estrella Burgos, who saved one for the Quito title, and Marrakech champ Borna Coric, who saved five.

"Beating four players who have been in the Top 10 is pretty amazing," Lopez added. "The fact that I have played these guys this week and was able to beat them, it gives me even more confidence. Because sometimes the draw becomes open after some of the top guys lose, but in my case, it was not like this. From the very beginning I had the best players in the draw. So that gives me a lot of energy for the rest of the season."

Unloading his mammoth forehand on the speedy Centre Court grass, Cilic hit hard and flat to Lopez's forehand to draw errors and break to love in the 10th game. With a set in hand, the World No. 7 continued to employ a relentless barrage of power tennis in the second. His service holds were swift and efficient, while Lopez faced a battle to maintain his serve every time he stepped to the line. But the Spaniard would extend the set to a tie-break, where he found a second gear, throwing down a trio of aces and firing aggressive returns at Cilic's feet.

As indefatigable as Cilic seemed in the first two sets, Lopez abruptly turned the momentum to his side  in the decider. With rain clouds hovering ominously overhead, the championship would head to a decisive tie-break. Neither player was broken in the third set and the trend would continue in the tie-break, with no mini-breaks through the first 14 points.

Three years after holding championship point and falling to Grigor Dimitrov in the 2014 final, Lopez would not be denied his date with destiny. He turned aside a match point at 6/5 with a lunging volley from the service line and eventually crossed the finish line on his third opportunity, striking an ace at 8/8 and benefitting from a Cilic missed forehand a point later.

Lopez prevailed after two hours and 32 minutes, firing 19 aces. Cilic launched 22 aces in defeat, turning aside the lone break point faced. He conceded just one break of serve for the entire tournament (61 of 62 service games won).

"It was a very close match," Lopez continued. "This is a match I expected, to be honest. Playing against Marin on grass, I knew it was going to be like this. It's only two, three points at the end that makes the difference... The third set was very equal. I knew it was going to be another tie-break. Then it's one or two points. I was just trying to fight. I couldn't do anything. Those moments where you are so tight, you just fight, you try to put the ball in, that's it. Try to serve the best that you can do."

It was sweet revenge for Lopez, who fell to Cilic in straight sets at Roland Garros just three weeks ago. The Croatian still leads the FedEx ATP Head2Head series 5-3, despite suffering his first defeat to the Spaniard since 2010. It was deja vu for the pair at the Aegon Championships, with both previous meetings also resulting in a comeback from 6-4 down. Cilic prevailed in the 2013 second round and 2016 first round.

"Looking at the whole week, it was great tennis for me," said Cilic. "I have to say maybe one of the best grass-court tournaments for me overall throughout my career, looking at the consistency of my game. I lost only once my serve during the whole week, which is amazing, considering last week I didn't lose serve in Netherlands, too. That makes it even better.

"Looking at my game, I'm feeling great on the court, moving well, playing well. I was even today against Feliciano making more pressure on him, on his service games than what he did on mine. That's another plus. So overall, I'm feeling really satisfied and I think I need just now a few days to recover mentally. Then I can continue with good form." 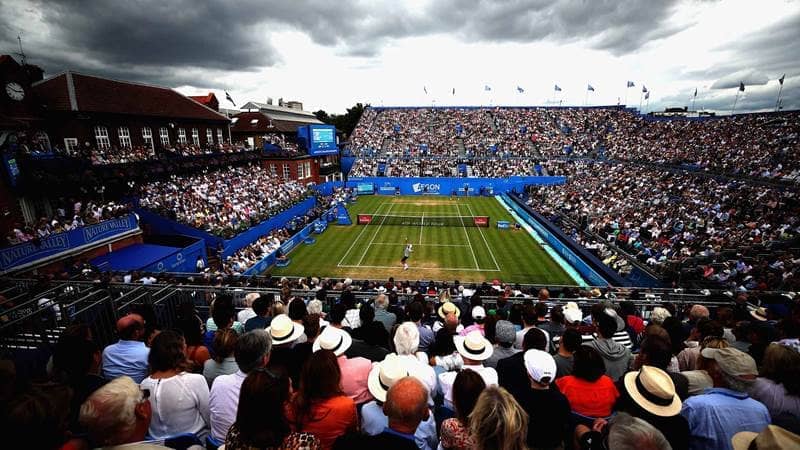