Rafael Nadal becomes the second man in the Open Era to win all four major titles multiple times with his Australian Open victory.

Look Back At Nadal's Four Comebacks From Two Sets Down

Rafael Nadal's stunning 2-6, 6-7(5), 6-4, 6-4, 7-5 comeback victory against Daniil Medvedev was not just the first Australian Open final in which the champion rallied from two set down to win since Roy Emerson defeated Fred Stolle in 1965. It was also just the fourth time Nadal has overcome a two-set deficit in his storied career.

You May Also Like: Social Media Reacts To Nadal's Thrilling Australian Open Win

The task became even more daunting for the home favourite when he won just five games in the first two sets. With Ljubicic firing huge serve after huge serve on the hard court (Madrid transitioned to clay in 2009), Nadal struggled to strike back.

2006 Wimbledon R2 - Nadal d. Robert Kendrick 6-7(4), 3-6, 7-6(2), 7-5, 6-4
In the second round at Wimbledon less than a year later, Nadal also found himself on the opposite end of the court of a big server in Robert Kendrick. The American did not have the pedigree of Ljubicic, but the No. 237 player in the ATP Rankings had a powerful game to trouble the Spaniard on the grass.

At the time, it was unclear how well Nadal would adapt his game to the slick surface. He had gone 3-2 in his first two appearances at Wimbledon in 2003 and 2005, and at the time the world did not know he would become a two-time champion at the event. Kendrick powered his way to within two points of the biggest victory of his career. But Nadal advanced, defeated Andre Agassi in the next round and eventually reached his first final at The Championships (l. to Federer). 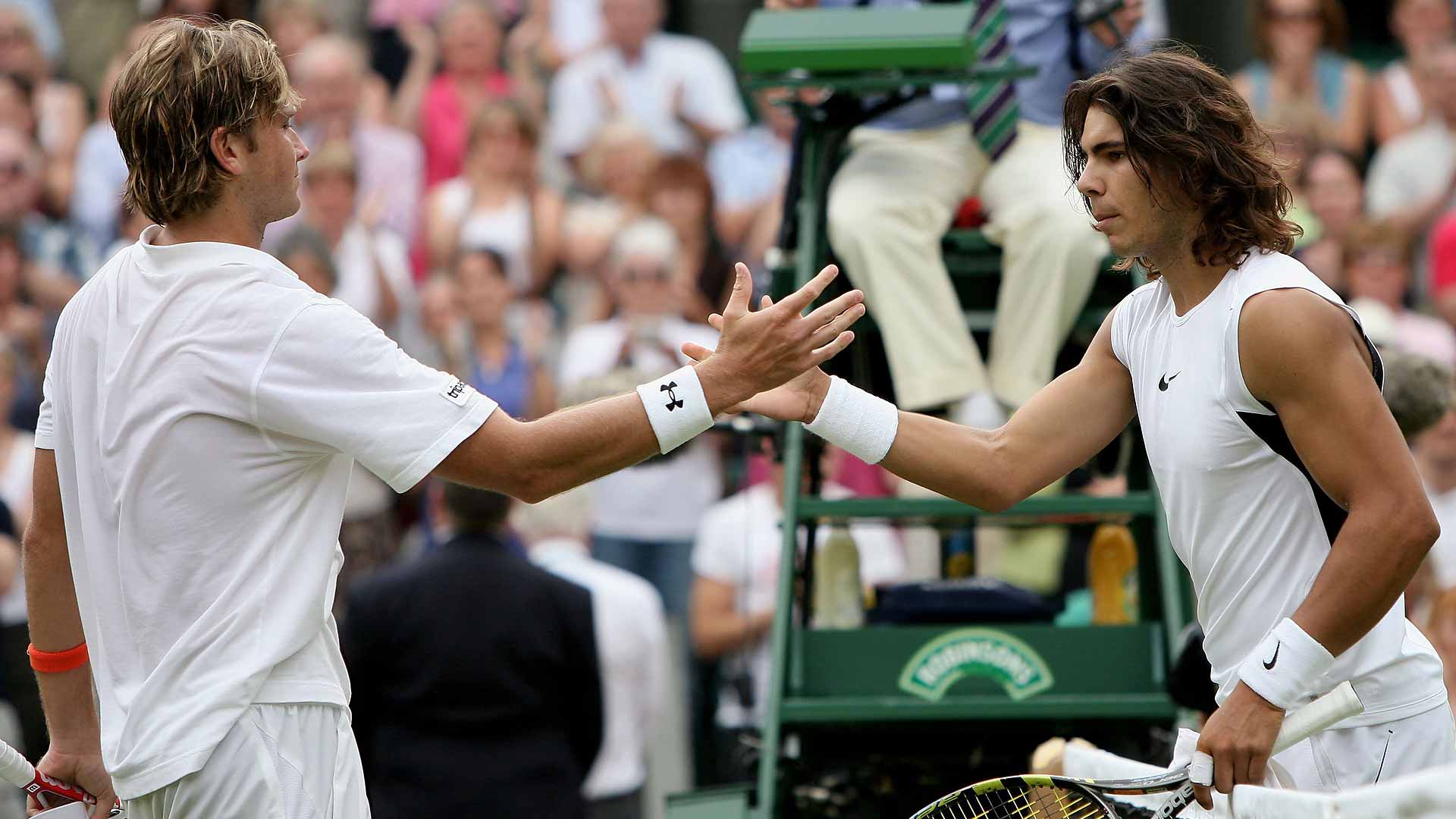 Photo Credit: Clive Brunskill/Getty Images
2007 Wimbledon R4 - Nadal d. Mikhail Youzhny 4-6, 3-6, 6-1, 6-2, 6-2
One year on from reaching his first final at Wimbledon, Nadal needed to claw through his third-round clash against Robin Soderling — who later handed him his first Roland Garros loss — in five sets. In the fourth round, things did not get easier for the Spaniard.

Russian Mikhail Youzhny, who was World No. 13 at the time, used his variety to take a two-set lead against the World No. 2. Youzhny had won two of their past three clashes, including a four-setter in the 2006 US Open quarter-finals. But like Nadal did the year before against Kendrick, he found a way to win, converting six of his 10 break points in the match. Nadal went on to reach his second final at the grass-court major (l. to Federer).

“Youzhny was playing very good. I'm feeling [I was] not playing my best. But the truth [is] he played very well. For that reason I couldn’t play very well, too,” Nadal said. “I played [a] little bit defensive. His game is very good for this surface. He played very flat all [the] time, fast. He has one serve, the serve is always going down. [His serve] doesn't bounce high. Yeah, it’s tough.

“After the first two sets, the next three sets maybe I played my best game on grass in my life.”

2022 Australian Open Final - Nadal d. Daniil Medvedev 2-6, 6-7(5), 6-4, 6-4, 7-5
Nadal downplayed his chances leading into the 2022 Australian Open. After the Citi Open in early August 2021, he missed the rest of the year due to a left foot injury. It would be tough for him to round into form quickly enough for best-of-five tennis against the best players in the world, right?

Nadal was in deep trouble against second seed Daniil Medvedev, the 2021 US Open champion, though. The Russian led 6-2, 7-6(5), 3-2, and held three consecutive break points at 0/40 on Nadal's serve. But the Spaniard found a way to get out of trouble and raised his level from there.

"In that moment, of course [the] situation [was] critical. But sport is unpredictable," Nadal said. "If you fight [until] the end, [the] normal thing is [to] lose the match in straight sets after that situation. On the other hand, I had a big chance in the second, too.

"I don't know. I was repeating to myself during the whole match, I lost a lot of times here having chances, sometimes I was a little bit unlucky. I just wanted to keep believing [until] the end. I just wanted to give myself a chance."

Nadal did just that. Medvedev steadied himself in the fifth set, leading to a rollercoaster of momentum shifts. Nadal let slip an opportunity to serve for the title at 5-4 in the decider, but broke back in the next game before successfully serving out the match at the second time of asking. The legendary lefty became the first player in the Open Era to rally from two sets down in the Australian Open final. 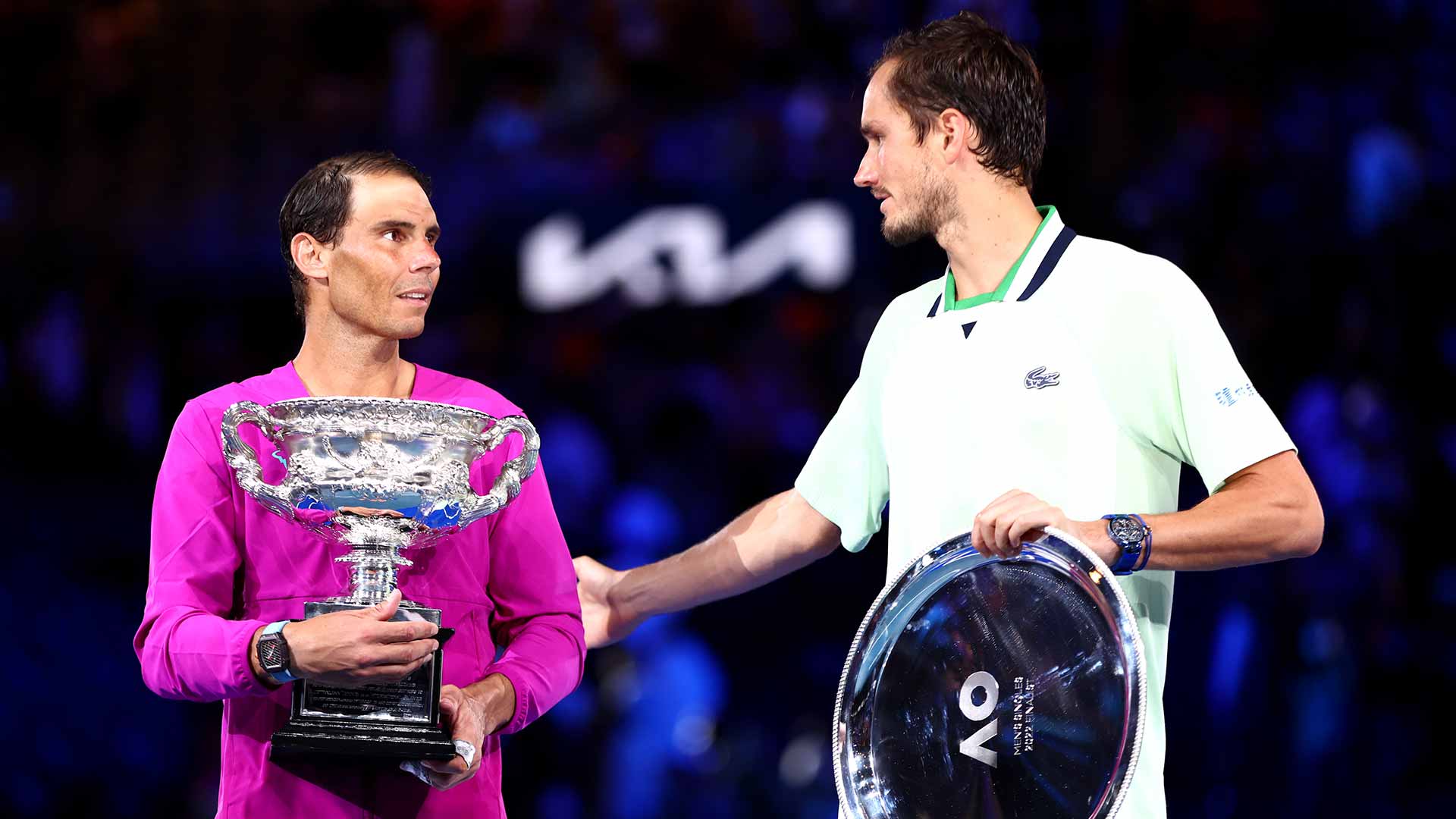