Rajeev Ram/Joe Salisbury brought their partnership to a new level on Sunday by capturing their first Grand Slam men’s doubles title at the Australian Open. The No. 11 seeds prevailed by ending the dream run of Aussie wild cards Max Purcell/Luke Saville 6-4, 6-2.

“I don’t think I thought when I asked you to play just over a year ago that we’d be standing here now, but it’s been an honour to play with you,” Salisbury said to Ram during the on-court trophy ceremony. “It’s been so much fun to have you as my partner and as my friend. Thank you so much for being the best partner I could get.”

The American-British pairing dropped just one set this fortnight en route to being the last team standing in Melbourne. Ram, 35, was rewarded for his perseverance after 16 years on Tour. Making his 58th Grand Slam doubles appearance, he broke the Open Era record for most attempts before winning a major men's doubles championship. Ram won the mixed doubles title at this event last year (w/Krejcikova).

“To actually finally get one is great,” said Ram, who switched to playing doubles full-time in 2017. “But it doesn't feel like it's been the same level of intensity as it has been last three or four years.”

Ram/Salisbury showed they could compete for the world's biggest doubles titles during a successful debut season together last year. They prevailed in Dubai (d. McLachlan/Struff) and Vienna (d. Kubot/Melo), reached the quarter-finals at Roland Garros and qualified for the season-ending Nitto ATP Finals in London. 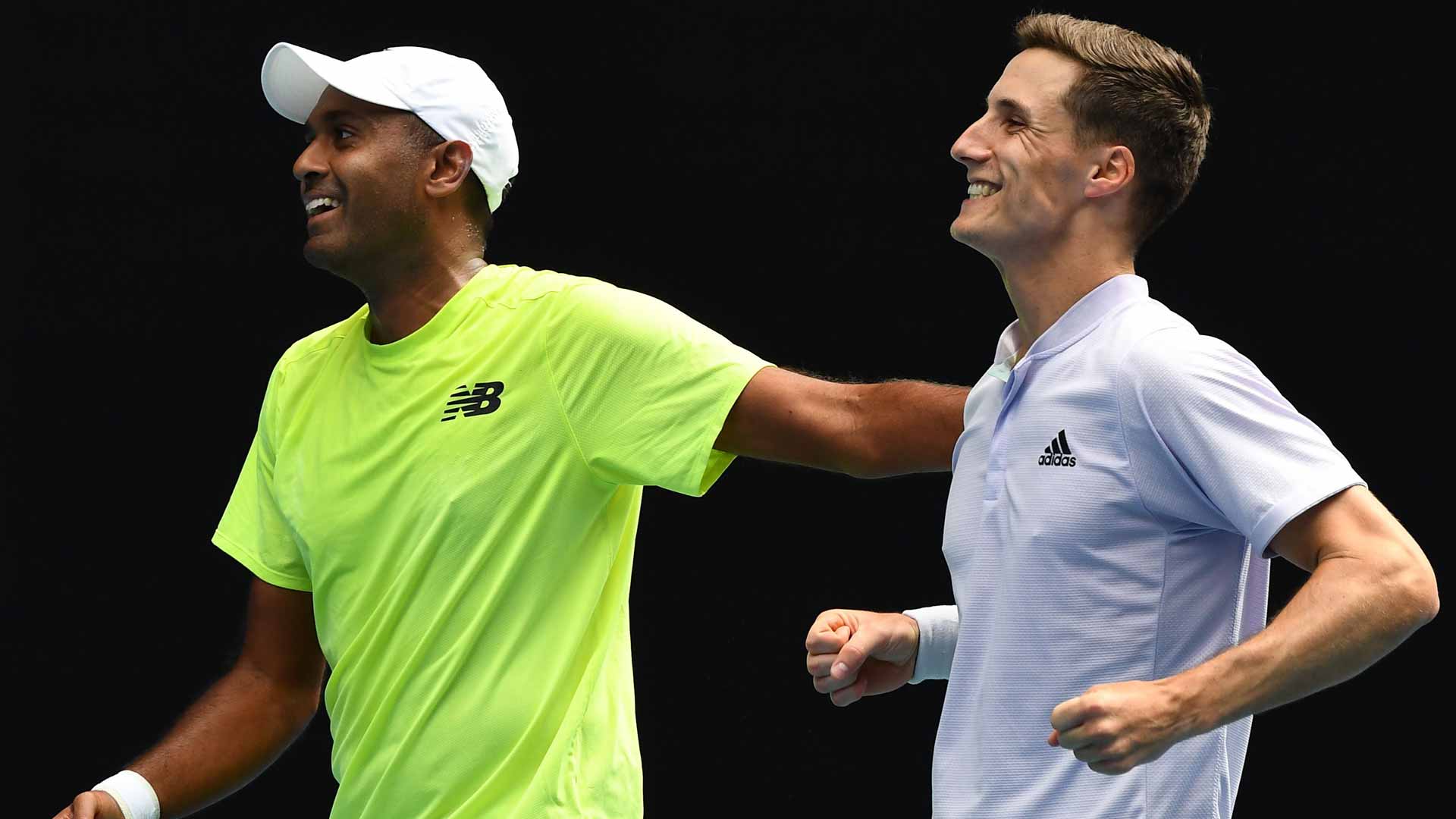 Despite the loss, Purcell/Saville have plenty to be proud of by producing the biggest result of their respective careers. The Aussies became the first wild card team to reach the men’s doubles final in tournament history. Saville had just two tour-level doubles wins before the start of the tournament, while Purcell had only one.

Purcell/Saville have enjoyed plenty of success as a team on the ATP Challenger Tour by winning eight titles since the start of 2019. They'll each far surpass their respective career-high FedEx ATP Doubles Rankings when they leap inside the Top 50 on Monday.

"I felt like we probably didn’t quite play our best today, but even if we did, it would have been [the same] result,” Saville said. “Max and I have been on a really good run the past year. If you had told us at the start of this that we’d be in the final, we probably would have fallen over.”

Ram/Salisbury applied pressure in their return games from the start of the match. Purcell was forced to save four break points at 1-1 in the opening set, while Saville erased another two games later. But with Purcell serving at 3-3, Ram/Salisbury made good on their seventh opportunity and grabbed the first break of the match. The No. 11 seeds encountered few problems in their service games, winning 20 of 24 points to take the early advantage.

They maintained control in the second set by breaking Saville for a 2-1 lead after Purcell missed a routine volley into the net. Ram/Salisbury comfortably broke Purcell two games later and continued to dominate on serve, dropping just seven points (36/43) throughout the afternoon. Fittingly, another big serve from Ram wrapped up play after 70 minutes.

“I've been quite nervous the last couple days,” said Salisbury, whose best performance prior to the fortnight had been reaching the 2018 Wimbledon semi-finals (w/Nielsen). “But then, actually today, the closer it got to the match, I almost felt more calm. Once we got on court, I didn't really feel that nervous. Almost felt like that once we get on court, that's when we sort of feel more comfortable. We knew we'd just go out there, do our thing. We were going to do our best. We were ready to go. Whatever happened happened.”