Aisam-Ul-Haq Qureshi, Ryan Harrison as 'The Joker', Raven Klaasen and Rajeev Ram took part in the Player Revue finale on Wednesday in Monte-Carlo. 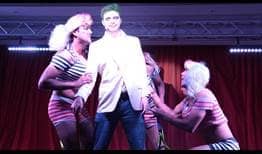 Much fun was had during the traditional two-hour show

World No. 6 Milos Raonic hosted a successful annual Player Revue on Wednesday night at the 117th edition of the Monte-Carlo Rolex Masters.

Robin Haase starred in sketches as a mad scientist with Rohan Bopanna, Aisam-Ul-Haq Qureshi and David Ekerot, who portrayed a clone of Roger Federer and Rafael Nadal. Haase later hosted the Robin Haase Show, where he conducted a funny ‘Never Have I Ever’ quiz with Tommy Haas, Pierre-Hugues Herbert and Viktor Troicki.

Ryan Harrison portrayed the ‘Joker’ as Raven Klaasen, Qureshi and Rajeev Ram attempted to come up with new ways to better promote doubles, ending with a dance number.

Internationally famous Italian baritone Nicola Alaimo, who is now singing ‘Il Trovatore’ at the Opera of Monaco, was joined on stage by Haase and Raonic for a rendition of O Sole Mio. Haase then briefly belted out Nessun Dorma.

Raonic was joined on stage by co-host Cristina Cimino at the Monte-Carlo Bay event, organised by Anna Galoppo and the ATP’s Cecilia Ghe, with the help of Ekerot.