Milos Raonic is going for his first ATP Masters 1000 title this week.

To address the elephant in the room: Fabrice Santoro will not be changing Milos Raonic's forehand to a two-hander, nor will he be proposing the Canadian work on his tweeners or make his net game more cheeky.

The Frenchman, who started working with Raonic two weeks ago, confirmed to ATPTour.com that he doesn't plan on Santorising the Canadian's power game during their one-month trial period.

“I'm not sure it's the best option for him to win matches,” Santoro said in between laughs. “With his power, it would be a bad idea.”

But if you've watched Raonic reach his fourth BNP Paribas Open semi-final this week, you've seen glimpses of the Frenchman's effect. Take, for instance, 4-3, 40/40 point in the second set of Raonic's quarter-final against Serbian Miomir Kecmanovic.

The 6'5” Canadian fed the 19-year-old a cocktail mixture of inside-out forehands and backhand slices, and the third and final slice faded away from Kecmanovic. The backhand slice is a weapon he and his new coach have discussed extensively.

You May Also Like: Here's Why Milos Raonic Is An Indian Wells Threat

“Everybody moves extremely well laterally. Sometimes you can try to get glimpses of better looks by trying to bring them in a bit more,” Raonic said. “Fabrice has put quite a bit of attention on it. Sometimes I do it too much, but it's a good option to have.”

The added variety is the latest evolution in Raonic's game as the Canadian, a frequent tinkerer of his style and coaching staff, searches for what will help him scale the proverbial hump and win a Masters 1000 or Grand Slam title.

“It would be there... parallel to the Wimbledon final, if not higher, just because it's going through a week amongst the best players in the world without ending with a loss,” Raonic said of winning a Masters 1000 title.

“It's not easy to do, especially not the ones at the beginning of the year, these two [Indian Wells and Miami], because guys have a lot of time. Nobody is really rushing here. Guys can bring their best tennis.”

Early in his career, Raonic focused on improving his baseline game and lateral movement. The Tour was comprised of great movers who could rally all day from the back of the court. But that style took him only so far.

“I think that got me to the point where I was on the brink of the Top 10, I even squeezed into the Top 10 for a little bit. But I wasn't having the success I wanted at the bigger moments, and I sat back and sort of thought, 'What do I need to do better?'” he said.

A 6'5” power player skidding from alley to alley didn't make much sense.

“I didn't think that would suit my size or my abilities or my strengths to play that way,” Raonic said. “So I felt like it was natural for me to focus on moving forward, to take time away from my opponents, give them looks that they don't get too often throughout the year and try to keep them off balance in that way.” 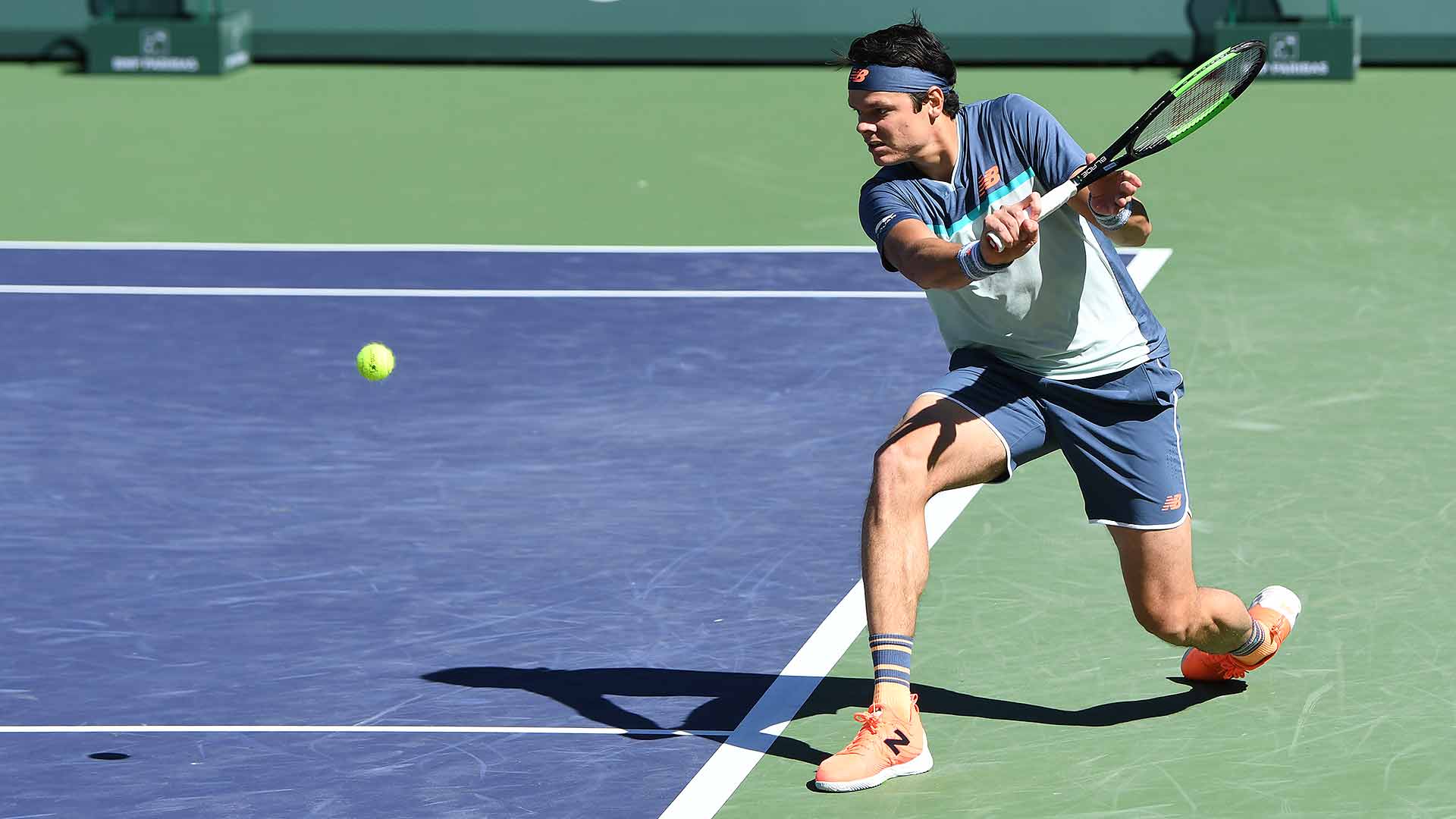 Raonic's backhand slice has been a focus of his work with new coach Fabrice Santoro. (Photo: Peter Staples/ATP Tour)

In the first five years of his career, Raonic hit only about 2,000 volleys. But in the past few years, he's hit tens of thousands of volleys and his practices have revolved around net play.

Last year, however, as he worked with 2001 Wimbledon champion Goran Ivanisevic, Raonic reached only one Masters 1000 or Grand Slam semi-final (Miami). He recently called Santoro, and the two agreed on a new path.

“More attacking, more mixing up my shots, not being predictable in the sense of not hitting the same ball twice,” Raonic said.

Initially, the hire turned heads. Santoro, The Magician, working with Raonic? But six-time ATP Tour titlist, who also works with the net-charging Frenchman Pierre-Hugues Herbert, is eager for the challenge, even if his new player won't be imitating his two-handed forehand slice or trying any of his trick shots.

“He's a hard worker, he's very professional and he has a big ambition – so it's very easy to work with someone who works hard and has a big ambition,” Santoro told ATPTour.com. “But still, I think he didn't reach 100 per cent of his potential. He can improve a few more things, and that's why I am here.”