With everything to play for, Rafael Nadal saved arguably his best performance for last. The World No. 1 exhibited yet another ruthless display of aggression to emerge with the Roland Garros title on Sunday.

Nadal defeated Dominic Thiem 6-4, 6-3, 6-2 in two hours and 42 minutes to seize the Coupe des Mousquetaires for an unprecedented 11th time. The Spaniard saves his top level for championship occasions like these, and Sunday's affair on Court Philippe Chatrier was no exception.

"Coming back and to have the chance to win in Monte-Carlo, Barcelona, Rome, and now especially here, it's very emotional for me," said Nadal. "It was a very special moment and well received,  that minute or two minutes of the crowd supporting me. That feeling in that moment was difficult to describe it. Very emotional for me.

"So winning here after having the clay court season that I had is, yeah, emotional and that give me calm and confidence to keep going."

It is unfathomable. Eleven titles at a single Grand Slam tournament. 'La Undécima' lifts Nadal to truly historic territory. No other man or woman has achieved the feat in the Open Era.

At the age of 32, Nadal continues to strengthen his legacy on his most dominant surface. Less than two months after lifting an 11th trophy at the Rolex Monte-Carlo Masters and following that up with another 'Undécima' at the Barcelona Open Banc Sabadell, the Spaniard completed the set with his victory on Sunday at Roland Garros. Moreover, Nadal remains atop the ATP Rankings for a 177th week.

You May Also Like: How Rafa Triumphed At Roland Garros

With the victory, the Manacor native adds a 17th Grand Slam crown, which draws him to within three of Roger Federer's all-time record of 20. Furthermore, Nadal became just the fourth man in the Open Era to win three or more major titles after turning 30. It is an exclusive club that also includes Federer, Rod Laver and Ken Rosewall.

For the second straight year, Nadal leaves the European clay-court season with a staggering 24-1 mark. His only blemish was a quarter-final defeat to Thiem in his home capital of Madrid. But the Austrian was unable to find the formula to upset his Spanish opponent twice in one campaign.

Thiem made it a tight encounter early in the opener, with the first set lasting 67 minutes. The Austrian broke back after Nadal seized an immediate break for 2-0, but was unable to sustain the same level of energy and pressure on the Spaniard throughout the match.

Two breaks in the second set proved critical and Nadal would roll from there, claiming the decisive break for 2-1 in the third after escaping a 0/40 deficit in the opening game. He secured his 11th Coupe des Mousquetaires trophy after two hours and 42 minutes, firing a service winner on his fifth match point. 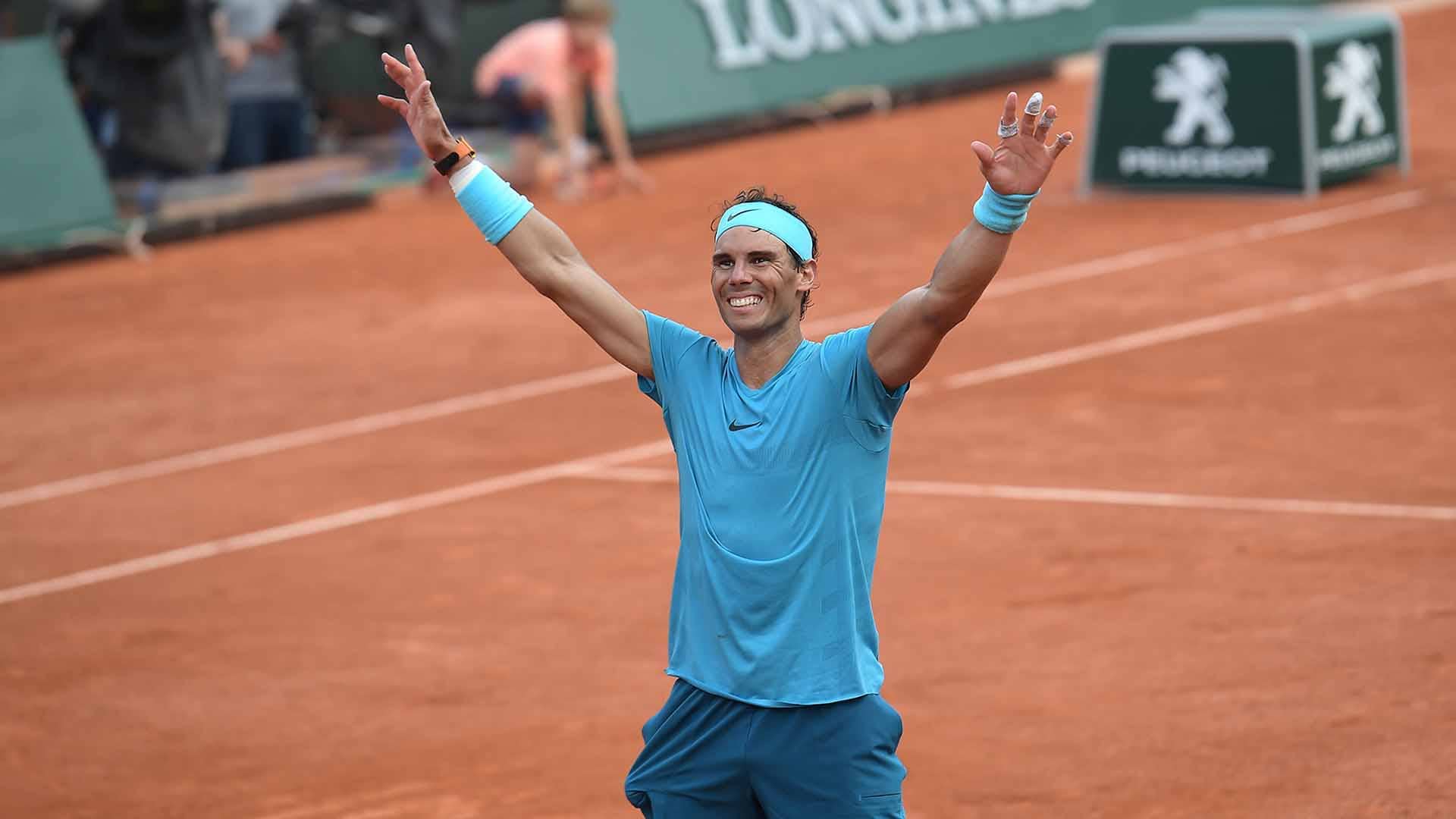 "Of course when you have played so many finals in a given moment, every year is totally different, but it's true that there is a given moment where there are situations you have already been through," said Nadal. "And when you have been through different times, you have normally capacity to better understand the situation and to better manage them, at least understand the moments of the match that are of high tension and do better than the first time.

"So, yes, in the second set I was a bit tired. I didn't fight so much for a few games. I was at ease with my serve, although my game suffered a lot."

Nadal won 82 per cent of points on his first serve while claiming nearly half of total return points (47 per cent). Thiem did well to strike 34 winners (to Nadal's 26), but was victimised by 42 unforced errors.

The World No. 1 extended his FedEx ATP Head2Head series lead to 7-3, with all of their meetings coming on clay. One year after relinquishing just seven games in their semi-final encounter, Nadal replicated the feat. He is now 2-1 against Thiem this year, with his other victory coming in the Monte-Carlo quarter-finals.

Most Titles At A Single Tournament (Open Era)

Nadal's 57th clay-court title caps a remarkable turnaround for the Spaniard. Just three months ago, he was forced to withdraw from ATP World Tour stops in Acapulco, Indian Wells and Miami due to a right hip injury. And now, he leaves the clay-court season with the loss of just five sets in 25 matches.

Moreover, Nadal claimed a tour-leading fourth title of 2018 and joins Thiem and Alexander Zverev as 30-match winners this year. Thiem, who remains on top of the match wins leaderboard with a 35-9 win-loss mark, will celebrate a strong fortnight in Paris. The 24-year-old advanced to his first Grand Slam final with impressive victories over Stefanos Tsitsipas, Matteo Berrettini, Kei Nishikori, Alexander Zverev and Marco Cecchinato.

"I think it was the first time against him here in Roland Garros where it was a fight," said Thiem. "It was a decent match from my side. He was playing very well, I think, and there is a reason why he won 11 times here. It's definitely one of the best things somebody ever achieved in sport.

"For sure I'm confident that this was not my last Grand Slam final, and that's my biggest goal, to get into the next one and then to do it better than today." 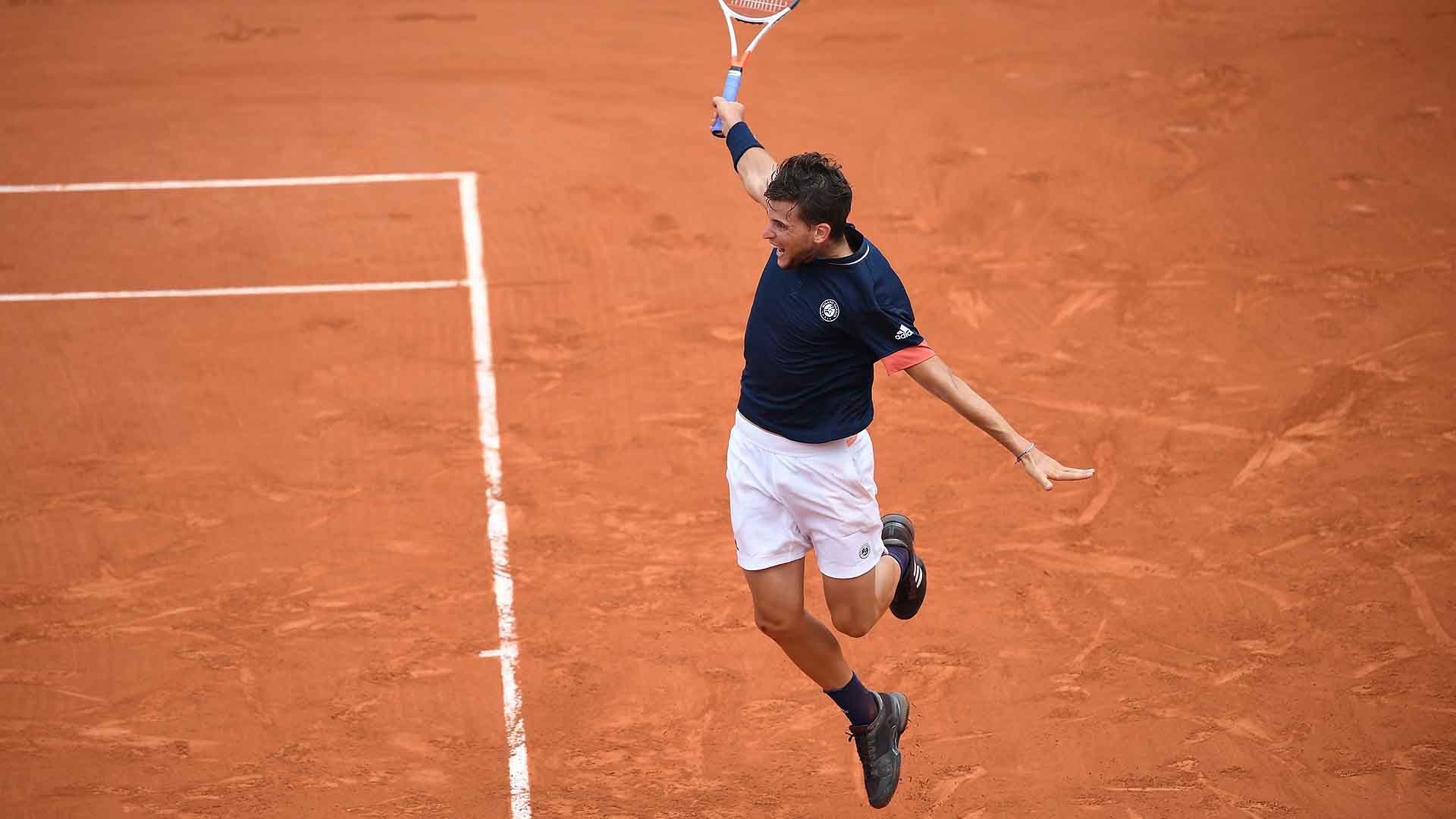 Thiem moves up one spot in the ATP Rankings, rising to No. 7 on Monday. Contesting his 17th tour-level final, he falls to 10-7 in title matches and 2-2 this year. He previously lifted the trophy in Buenos Aires and Lyon two weeks ago. His 10-match win streak entering the final equals the longest of his career.

"Of course it was a special thing for me to play the first slam final," added Thiem. "But on the other hand, I was pretty calm and I knew that I go into it like it would be any other match. I think this was the right approach because if I let too much happen, my emotions, everything, because it's the first Grand Slam final, it wouldn't suit my game very well, and that's why I went into it like every other match."