Roger Federer moves into the quarter-finals at Roland Garros.

It was undoubtedly one of the greatest escapes of Roger Federer's career.

The Swiss has produced many pulsating moments of magic to rally from the jaws of defeat. In fact, he owns a staggering 10 comebacks from two sets down. But this was perhaps his most impressive, considering what was at stake. And the margins couldn't have been slimmer - literally.

Exactly 10 years ago, with his sights firmly set on a maiden Roland Garros crown, and with chief rival Rafael Nadal already dismissed from the draw, Federer had his best opportunity to lift the Coupe des Mousquetaires. The problem was, no one told Tommy Haas.

The German streaked to a two-set lead in their Round of 16 meeting and was on the precipice of serving for the match, earning a break point at 4-3 30/40. Federer kicked a second serve into the box and proceeded to strike an inside-out forehand, barely clipping the tramline to stay alive. He was millimeters from conceding a critical break and perhaps squandering his date with destiny on the terre battue.

A decade later, on Sunday, following a comprehensive 6-2, 6-3, 6-3 fourth-round victory over Leonardo Mayer, Federer reflected on the 10-year anniversary of that memorable moment.

"I remember it very vividly," Federer exclaimed. "Obviously I wasn't thinking of winning the French Open, being down in that score. But as I hit that forehand, for the first time in the match I felt that I really hit the target I was looking for, and I know what saving break points can do to turn around matches.

"As I was fist pumping, going back to the deuce side, I told myself that hopefully this is going to be a big moment one day, trying to come back. I didn't think I was obviously going to win nine games in a row because I was struggling so much. But I was just finally relieved that I made that shot more than anything." 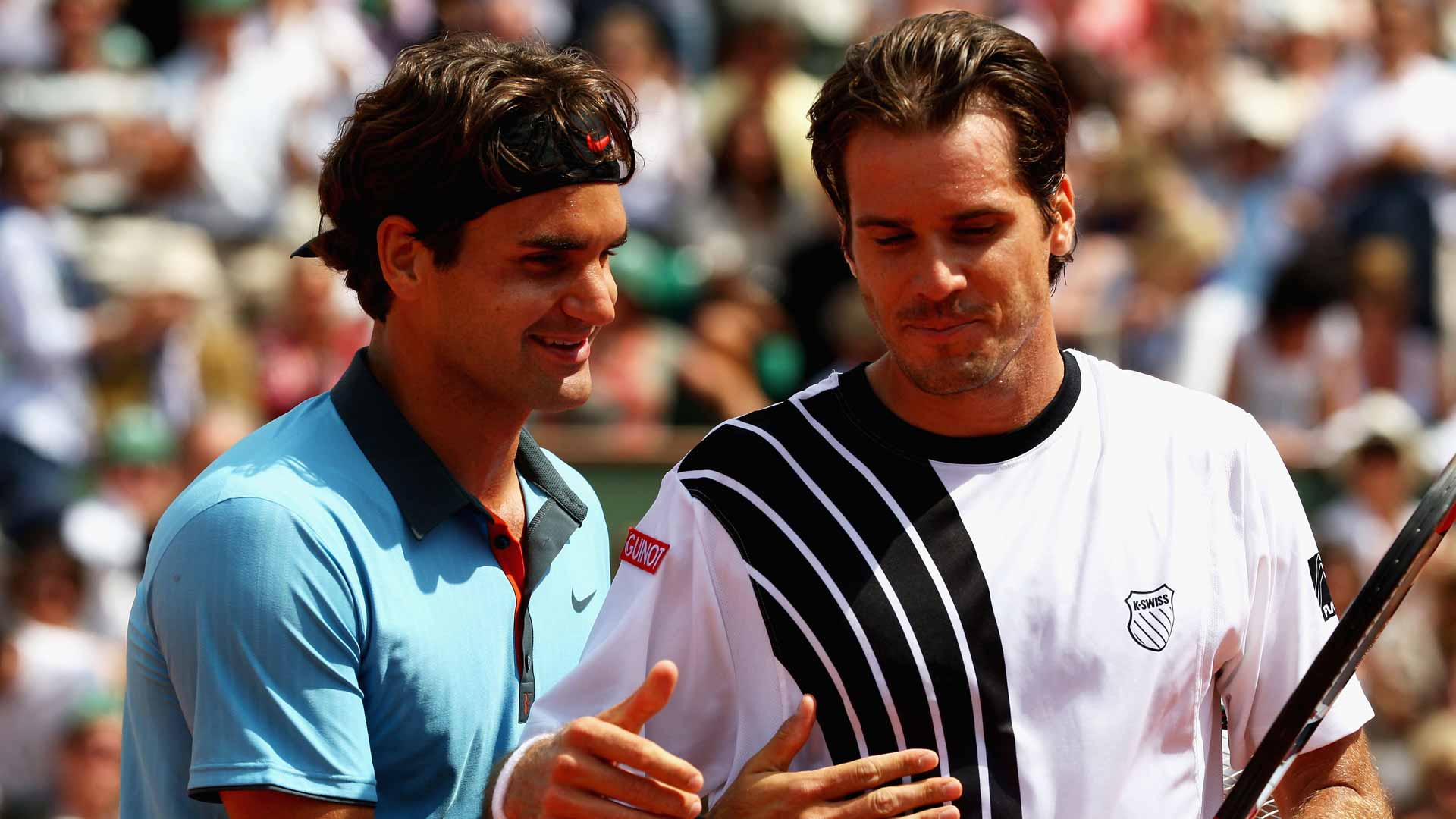 Federer proceeded to reel off nine straight games en route to the five-set victory. And the rest was history. One week later, he celebrated the 'Career Grand Slam' with his first Roland Garros title.

"I almost texted Tommy yesterday, just because I knew it was a 10-year anniversary," Federer added with a smile. "But then I didn't do it. Just felt like it wasn't the right thing to do, but the thought was there."

No such drama has followed Federer at the 2019 edition of Roland Garros. He has been at his ruthless best, not dropping a set en route to the quarter-finals. Broken just twice through his first four matches, it has been the perfect return to Paris for the 2009 champ.

You May Also Like: Federer Breezes Into Roland Garros QF

But despite his dominance, Federer admitted that he entered the fortnight preparing for the worst case scenario: a first-round loss in straight sets. Having not competed on clay in three years and having not appeared in Paris since 2015, the Swiss has kept expectations as low as possible in his return to the dirt.

"I do believe that I am a normal guy and I have to know what is the worst-case scenario," Federer said. "I mean, just for me as a player, for me as a father, for me as a husband, I need to know schedules. So I have to plan both ways always... Otherwise you get into this negative spiral that you don't want to be in.

"I think it's the same with your game. You need to be brutally honest to yourself sometimes and just say that, I don't know, my forehand is terrible right now. I'm not going to tell myself, It's great. That's why sometimes you go to the practice court and work on it.

"Same thing with your body. You need to know the things that are working and not working. As the unknown on the clay and here in Paris, to some extent, was still high, it was a scenario. Like it was today a scenario to also lose in straight sets. Like for that matter, any match I play on the tour for the last 20 years, there is a chance I lose in straight sets.

"But I take enough shirts on the court, I take enough racquets, strings, shoes, I'm ready for the battle. And I'm there to fight. I'm not going to go without trying. But of course the hope was to go deep and I'm in the quarters now, so I'm very, very happy at this point." 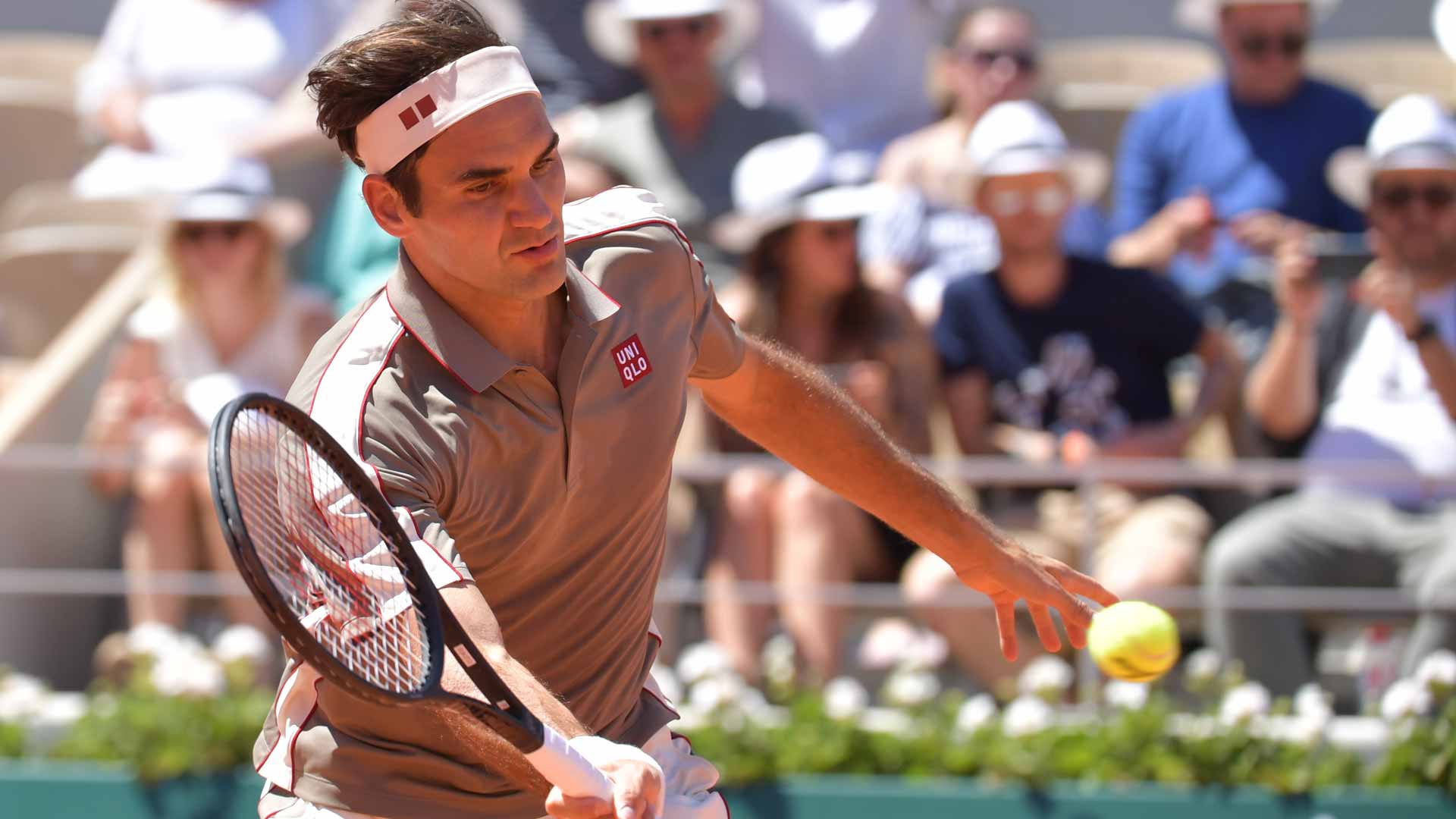 Federer is one win from a potential semi-final blockbuster against Nadal, which would mark his first appearance in the last four since 2012. But the Swiss is refusing to look that far ahead.

First, the third seed must get past either Stan Wawrinka or Stefanos Tsitsipas. Having faced his countryman on 25 previous occasions and coming off a four-set defeat to the Greek star at the Australian Open, Federer is fully focused on Tuesday.

"On clay it's very different and I would definitely have to look back into how Stefanos plays on clay. Obviously he returns from further back, he's not so far in. But he moves very naturally on the clay surface. So he's coming in with tons of matches, as well, in the year but also on clay, with a great win against Rafa in Madrid. I'm expecting a tough match. He's got the options to serve and volley. I saw him doing that in Monte-Carlo against Medvedev, but then also he's happy to rally from the baseline. He can figure it out, depending on the conditions.

"Against Stan, it's more straightforward. We know each other very well and we have played a ton of matches against each other. Also on clay, this is when it's been most tough for me against him. If I think back at Monaco finals, French Open here in '15 and then also he beat me in Monaco another time. So on clay it's been definitely more dangerous than on any other surface for me against him."

Federer leads his FedEx ATP Head2Head rivalry with Wawrinka 22-3, while his tally against Tsitsipas stands at 1-all. He most recently prevailed over the Greek in the final of the Dubai Duty Free Tennis Championships.