Diego Schwartzman sprints forward to retrieve one of 20 drop shots Novak Djokovic hit against him in the Rome final.

Novak Djokovic defeated Diego Schwartzman 7-5, 6-3 in the final of the Internazionali BNL d’Italia on Sunday in Rome, coming from two breaks down in the first set and a break down in the second set to secure a record-breaking 36th ATP Masters 1000 crown.

The drop shots came thick and fast from the racquet of the World No. 1, beginning on the second point of the match when he hit a backhand drop shot up the line with heavy backspin for a clean winner. It was a premeditated strike that sent an immediate message to Schwartzman. If the Argentine was going to set up shop further back than two metres behind the baseline to exchange side-to-side groundstrokes, he was going to have to do a lot of running forward to the net as well.

The drop shot barrage extended all the way to match point when Djokovic hit an identical backhand drop shot, with Schwartzman running this one down, but missing it wide to end the final. At any moment, especially from backhand groundstrokes, you knew Djokovic wanted to lean onto the ball and show a driving backhand, but then switch his grip in the backswing behind his body and carve out another drop shot to pull Schwartzman out of his deep trench. Twenty-six of the 28 drop shots from both players came off the backhand side.

The only problem for Djokovic was winning them.

Overall, Djokovic hit 20 drop shots in the match and only won seven. Winning just 35 per cent (7/20) of any tennis strategy is typically considered a disaster, but there were still benefits for the Serbian other than moving a point ahead on the scoreboard. Schwartzman’s game plan was to play exceptionally deep in the court and not miss. After the first set, Hawk-Eye graphics created an imaginary line deeper than two metres behind the baseline and highlighted that Schwartzman hit 50 per cent of his groundstrokes from this very deep location. The benefit for Schwartzman with this strategy was that Djokovic’s ball would slow down considerably at contact and be less venomous. The downside was Schwartzman’s considerable distance from the front of the court. 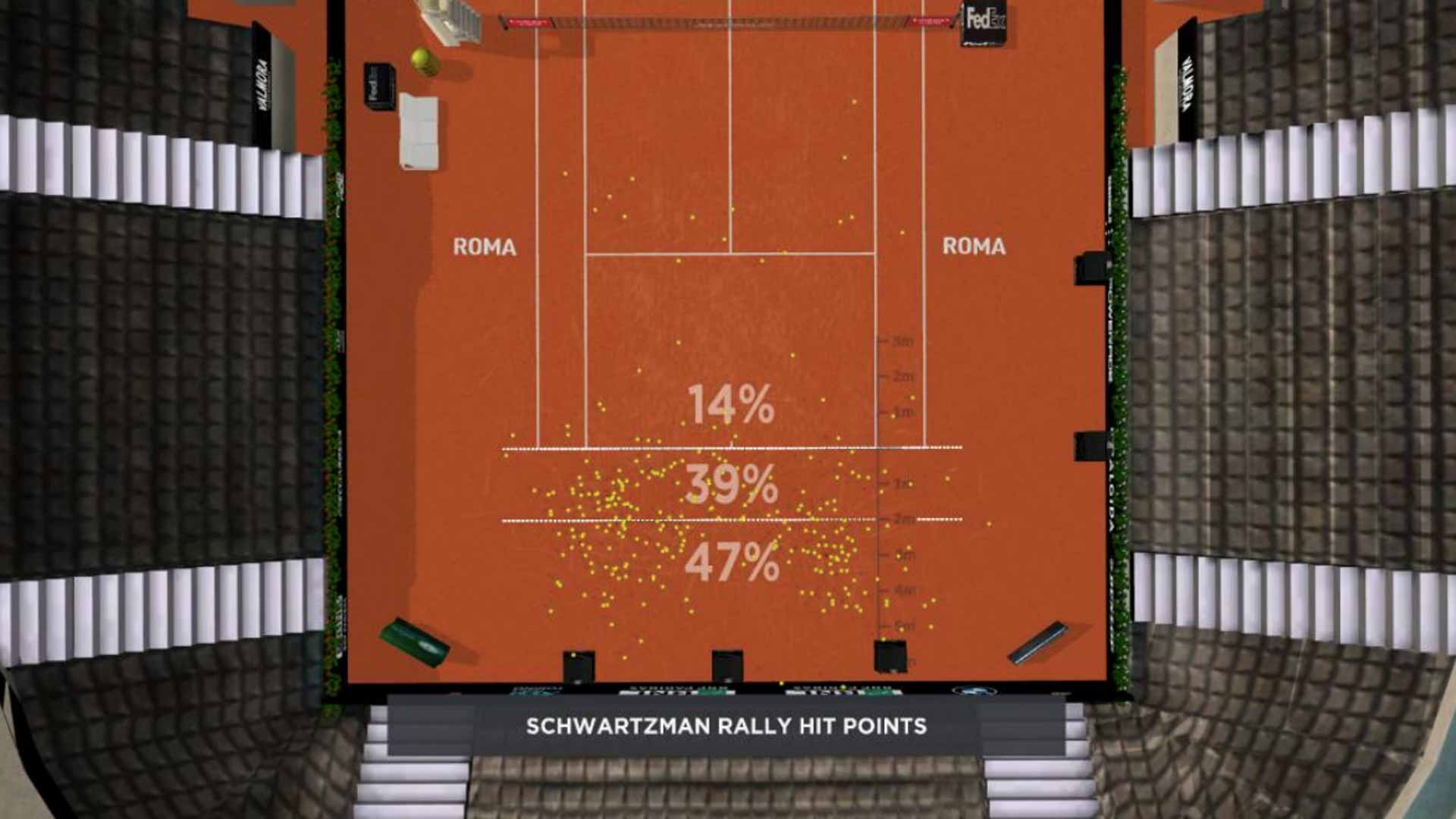 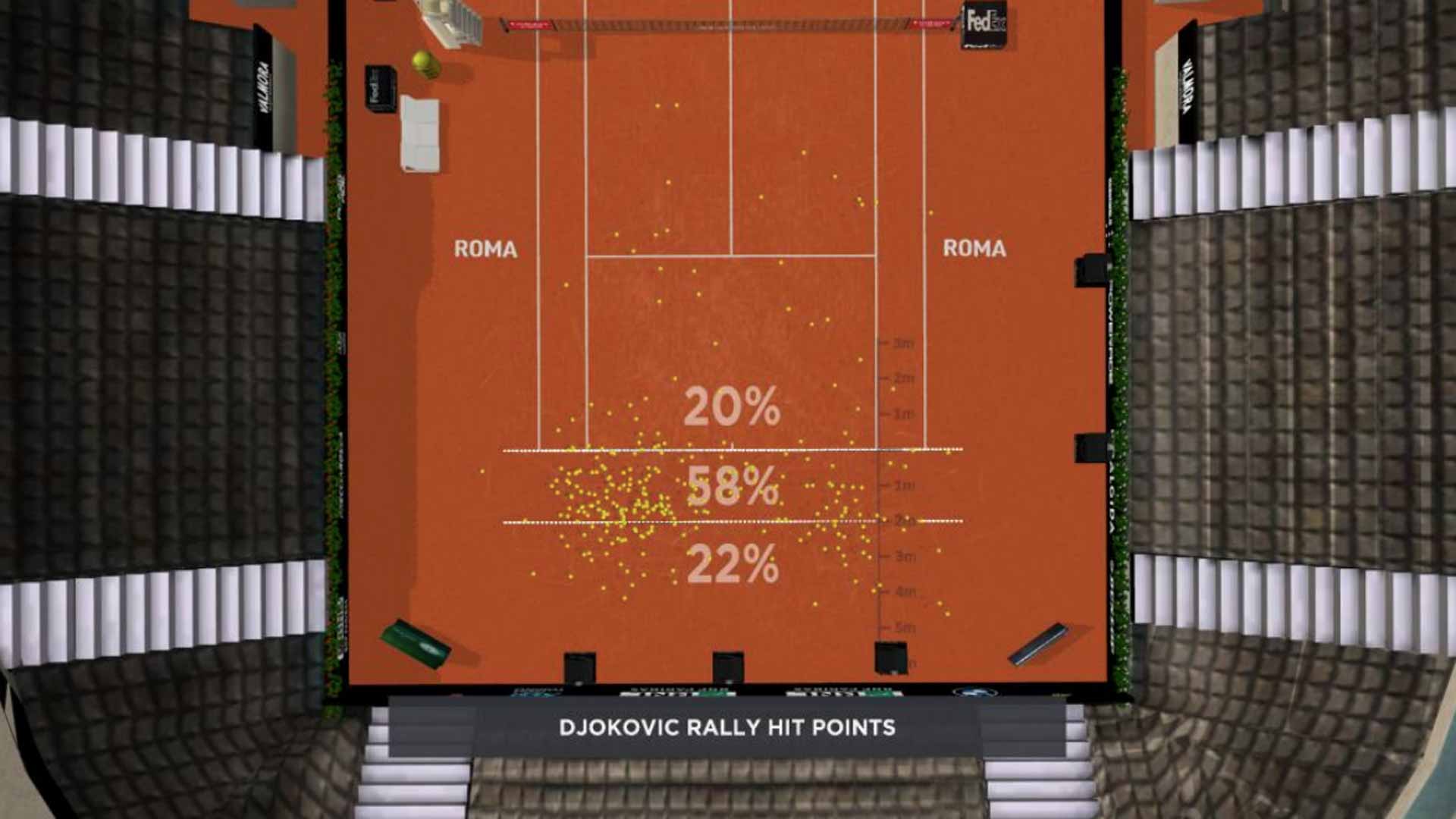 Djokovic only hit five drop shots for a clean winner. Five more went straight in the net. Nineteen of the 20 drop shots were struck off his backhand wing and 14 of the 19 were struck straight down the line. If Djokovic was going to lose the point, he made sure his opponent would pay the physical price running side to side as well as chasing down a menacing short ball.

Djokovic won with his first drop shot, but then lost his next four. Both players combined to hit four drop shots in the 4-4 game in the opening set, with Djokovic winning three of the points. Two games later at 5-5, Djokovic hit three drop shots, winning one. Djokovic was so obsessed with drop shots that he actually hit two in one point on the first point of the second set. The second one went wide.

Schwartzman, by comparison, was far more efficient with his drop shots, winning six of eight, including four of four in the second set. Drop shots are typically a secondary tactic in a match that rarely reach double digits in total. It’s interesting to note that between the two players the drop shot still had a losing record in this match, winning just 46 per cent (13/28) of the time. Djokovic lost six straight attempts in four games from 5-5 in the first set to 0-1 in the second set.

Winning the point is one outcome of hitting a drop shot. Building up lactic acid in your opponent’s legs and pulling them out of their comfort zone for the next point doesn’t exist on a stats page. But if they did, Djokovic would rightly point to these side benefits as to why he won the match.