Why Rublev’s Expectations Are A Dangerous Weapon

“Don’t you see? You always fight, but you don’t see what’s happening in front of you. You’re focussing on your fears, lost in your own thoughts. Things pass you by quicker than what’s happening at that moment. You overdo it.”

Andrey Rublev will be playing in his first Roland Garros quarter-final on Wednesday against Stefanos Tsitsipas. Fernando Vicente, his coach, believes there are many things that still need improving. He has told the Russian just that with his characteristic sincerity.

In a conversation with ATPTour.com, the Spanish coach remembered how Rublev was very close to being knocked out in his opener, and went into the reasons his understudy has suffered more than he should on court.

“People tell me he’s playing incredibly, that it’s very good, but they don’t remember that in the first round he lost the first two sets and he was at 2-5," Vicente said of Rublev’s five-set win against Sam Querrey. “His behaviour was not the most professional and he was close to being knocked out. The reality is that he is still at Roland Garros because Querrey didn’t finish [the match]. In any other tournament, he would have lost the match and would be at home.

“The head is not on a par with the player right now… In the last 16 against [Marton] Fucsovics, he was also a set down and 1-4 in the second, on the verge of losing it. He believed inside that he had to win. Obviously he has a lot of respect for the opponent, but because of that mental block he couldn’t move as he should. He was serving badly, not hitting his shots well.

“He was overwhelmed. He even made the mistake of taking Fucsovics’ towel four times. He wasn’t in tune with what was happening… I’m here to see what is wrong and to try and improve it. People can tell me that he’s [near] the Top 10 and playing very well, yes, but if he’s among those 10 best it’s because he wants to win big things. Yes, as simple as that. And he knows it. There are things that need improving.” 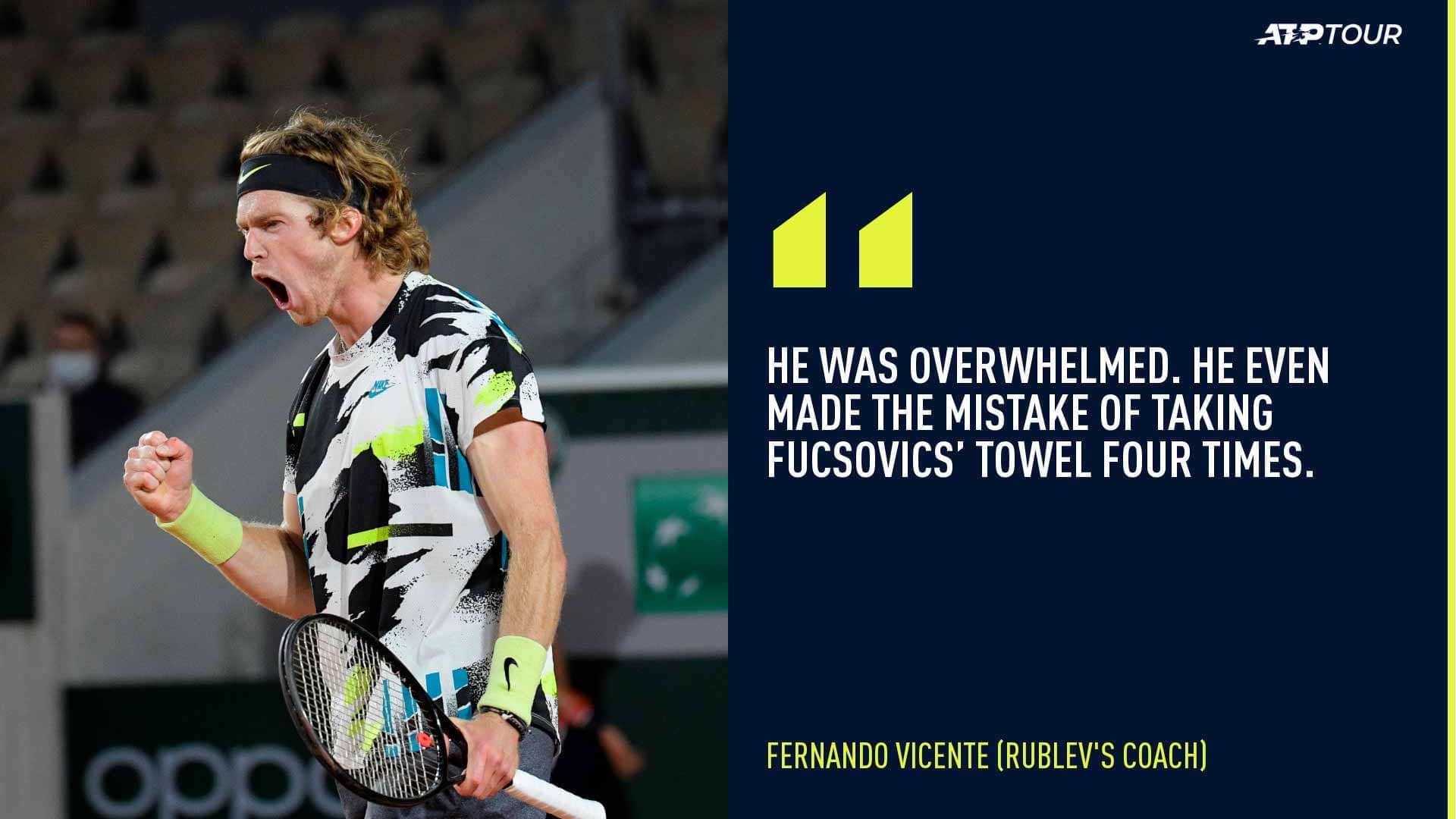 That mental work falls almost entirely to Vicente, who so far has not wanted to turn to a psychologist, preferring to be the one taking the reins himself.

“For the moment, I haven’t used anyone’s help because otherwise the team would be too big,” Vicente said. “They’re basic things. For a psychologist to tell him something that he already knows... I don’t want to spend hours somewhere else. We talk all day, we have a lot of confidence and he knows when he makes a mistake. He’s aware of what happened the other day, for example; due to his behaviour, because of his nervousness [and] wanting to win no matter what, he went about the match in the wrong way. There are times he doesn’t play to win, he plays not to lose.”

A few weeks ago, Rublev reached the quarter-finals of the US Open, bowing out to countryman Daniil Medvedev. Now, shortly afterwards, the Russian has reached the same round at Roland Garros. The problem, however, is a battle against his own expectations of himself, which prevent him from competing completely freely.

“He is so keen to do well that the pressure he puts on himself gets in his way,” Vicente said. “With the stress he plays with, he is scared of doing the things we work on. When he manages to overcome that, he will be more dangerous, but also his life will be better. He really suffers a lot on court.

“Before, if he was losing, he would shut down… Now, he’s realised [he can’t do that]. He used to leave tournaments hiding under his hoody. I told him, ‘Andrey, it’s going to happen so often to you that you might as well hold your chin up and go and have a coffee with everyone. The people here understand you. Every week, all but one player loses.’”

This honesty, which Vicente constantly employs with Rublev, may be surprising for a coach-player relationship, which is always delicate. The Spaniard, however, finds it the most natural thing in the world, and he has no problems continuing on the path that has given him so much success in the past.

“I am that honest with him, and he knows it,” Vicente admitted. “He’s a great kid. His only problem is that he’s very demanding on himself. He’s Russian. A Russian will try to contradict you the first 25 times. The 26th time, he’ll tell you you’re right. But he’s a very good, honourable guy.”