Casper Ruud and his father, Christian Ruud, are the two most accomplished male players in Norwegian tennis history.

How Casper Ruud Is Surprising His Father

Andrew Eichenholz
This article contains:
Christian Ruud reflects on his son's growth on and off the court

Christian Ruud enjoyed a successful career on the ATP Tour, winning 115 tour-level singles matches and climbing as high as No. 39 in the FedEx ATP Rankings.

Now, the Norwegian is helping his son, Casper Ruud, surge past his own accomplishments. ATPTour.com recently spoke to the elder Ruud about watching his son grow on and off the court, who has the better golf game, Casper’s artistic side and hopes of qualifying for the Nitto ATP Finals.

How much are you enjoying the experience of watching Casper grow?
I am enjoying it a lot. Everyone has compared him to me when he beat my records. I was in one ATP Tour final, and I was sad I didn’t win, but he is a lot better than I was. It is great to see him win titles and see him be the last man standing is special. Bastad, Gstaad and Kitzbühel were unbelievable and something he won’t forget for the rest of his life. I am super proud he was able to do so well this summer.

It must be cool to see him from first coming onto the Tour to then winning and now being in the Top 20?
It is super fun. He always seems to do small steps, which I know is difficult. He is going one way in the [FedEx ATP] Rankings. I am surprised he hasn’t had many setbacks. He is steadily going in the right way and I know his goal is to stay up there. I think he is surprising me with how comfortable he is in his position.

We know Casper loves golf. Who is better at golf, you or Casper?
I would say he is better, but I did beat him in Cincinnati, so it is not that big of a difference! It is nice we can go out, even though I am his coach and father, but we are at a similar level at golf. I was always into golf, I have been playing for 30 years. When he was younger I took him to the golf course and taught him the correct technique, so he can thank me for that! I took him to soccer and skiing and he is really enjoying golf the most. He is very competitive on the course. 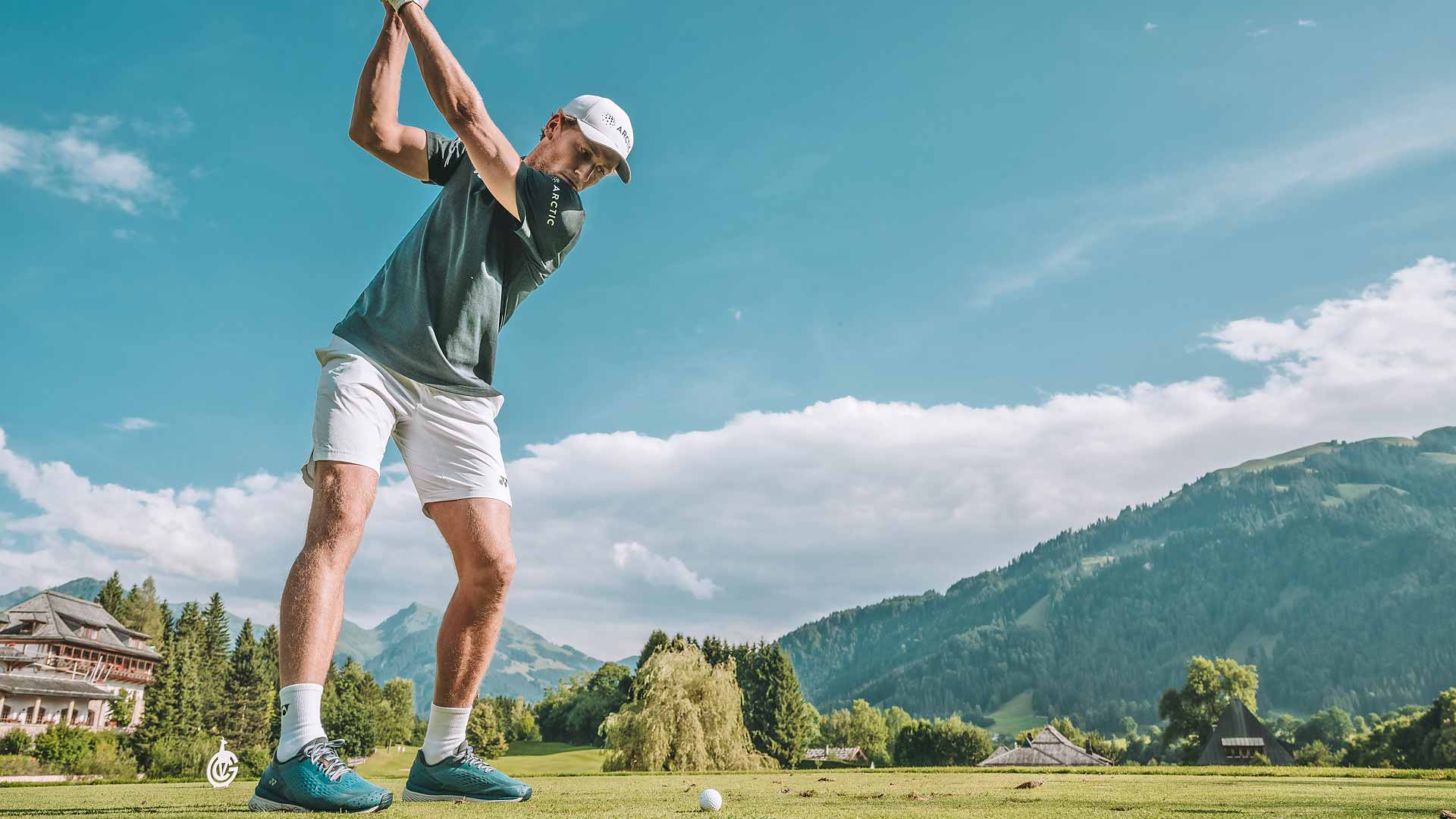 Photo Credit: Generali Open/Alexander Scheuber
What else do you like to do together outside of tennis?
We both follow hockey. We are both big Tampa Bay Lightning fans because we used to have a house in Tampa. I have been there to watch matches. Hockey is a big sport in Norway and Casper played when he was young, so he knows a bit about it.

When he is at home, he is trying to stay away from me! When we are on the Tour, we play golf and discuss sports, so I am happy about that.

What is the one thing people might not know about Casper?
He is a little bit artistic, good at drawing, always good when he was young. He is generally just a really nice and humble guy and I am proud.

You May Also Like: Getting To Know... Casper Ruud

It has been a busy summer on the court, and Casper recently won three titles in as many weeks in Bastad, Gstaad and Kitzbühel. How has everything gone in your mind?
Casper has done really well on the clay, having some good results. We were a little nervous because he got injured in Acapulco and had to pull out of Miami and we did not get many practice days on clay before he started playing. He played Mallorca and we were a little bit nervous about that, but then he had some really good results in Monte-Carlo and Madrid and also winning in Geneva.

It was then just amazing winning three titles in a row. He wanted to take the opportunity to do well because they were the last three tournaments on clay. To win all three is a little bit more than we expected. Of course, we are happy.

What was the situation in Acapulco?
In Acapulco he actually won in his second round against Tallon Griekspoor in a final-set tie-break and in that tie-break he had an awkward smash and felt something in his wrist. It was only the last five minutes of the match, so he didn’t think too much about it.

The next day, he woke up with it swollen and in pain and we were not sure what it was. He couldn’t hold a racquet. Luckily it healed quickly and we were able to make it for the clay-court season.

What is the biggest difference between Casper now and the Casper of two years ago when he was in Milan at the Next Gen ATP Finals?
He has matured and understands the game better. He is also managing to improve the forehand, and that is why he is winning matches. He is also playing smart with the backhand and the serve has improved as well. Overall everything is a little bit better year by year. He is confident going onto the court playing matches, especially since he has now won some titles. He is able to deliver a lot of wins.

What are you guys doing to focus on the hard-court part of the season to adapt his game?
I think his hard-court game has improved a lot in the past three years. He reached the fourth round in Australia, which I thought was a decent result. In Acapulco he was in the quarter-finals and was due to play Alexander Zverev. He was meant to play Miami, but hasn’t played much on hard courts this year due to injuries. I think he did well on the clay, so people say he likes to play on clay courts.

But the hard-court results this year were good. The goal is to try and reach the semi-finals at an ATP Masters 1000 event or win a smaller tour-level title on hard. I think he is good enough to do it, powerful enough to win on hard. His forehand and serve will work quite well on hard courts when he is playing well, so I am confident.

How comfortable is he with getting uncomfortable?
He likes to play well in practice and win, so it is a challenge for him to do things that he does not do that well. On hard courts you have to stay inside the baseline more and take the ball on the rise. He has improved that a lot, especially on the backhand side. He has beaten some good guys on hard courts this year and previously. While his favourite surface may always be clay, I think he can do well in the future on hard courts.

What are your goals for the rest of the year?
It is to reach Turin and finish in the Top 10. He is focused on getting to the [Nitto] ATP Finals. Without clay, it may be a little bit tougher, but he can play well on hard courts, and mentally he is prepared. There are six big events left this season and we will try to do well in all these events.