Casper Ruud further improved his bid to qualify for the Nitto ATP Finals on Monday at the BNP Paribas Open as he extended his winning streak to nine matches, saving all eight break points he faced as he overcome Lloyd Harris 6-7(4), 6-4, 6-4 to reach the fourth round in Indian Wells.

The Norwegian captured his fifth tour-level title of the season in San Diego and first on hard last week to move to eighth (2,925 points) in the FedEx ATP Race To Turin. It left Ruud 150 points ahead of ninth-placed Hubert Hurkacz before Indian Wells began and further clear of #NextGenATP Italian Jannik Sinner (2,505) in 10th and Felix Auger-Aliassime (2,320) in 11th, who fell to Albert Ramos-Vinolas in the second round.

Ruud will be targeting a deep run at the BNP Paribas Open on his main draw debut at the ATP Masters 1000 event as he aims to make his debut at the season finale, to be held at the Pala Alpitour in Turin from 14-21 November. 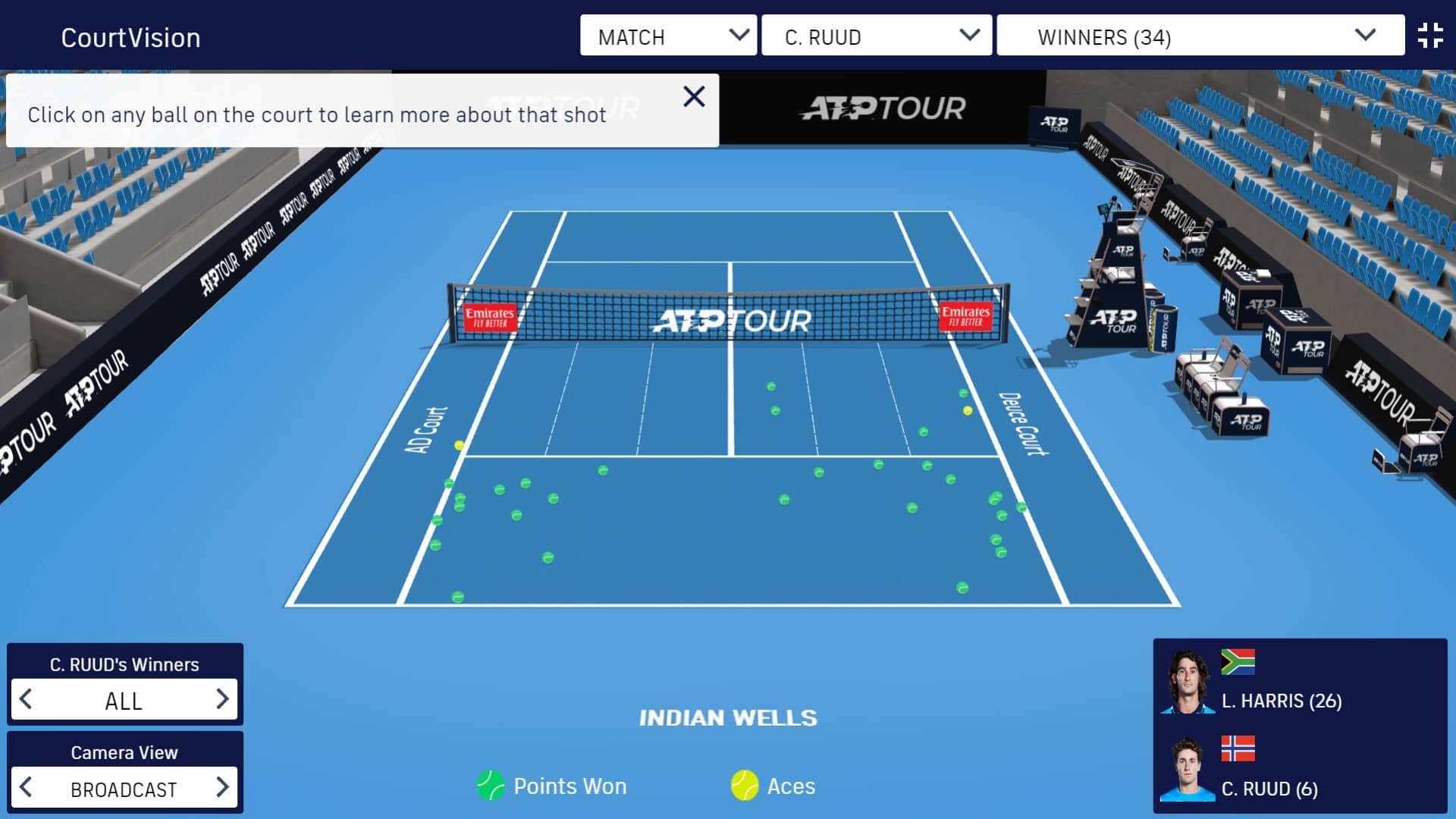 "It was a very tough match and I was fortunate to get through in the end,” Ruud said in his on-court interview. “There were only some points here and there that decided this match. I saved a lot of break points and in crucial points I stepped up my game.

“It was frustrating because Lloyd was playing well and I was not really feeling the groove like I felt in the first match and in the end I was fortunate to get through.”

The 22-year-old raised his level in the crucial moments against Harris, hitting with great depth from the baseline to advance after two hours and 53 minutes and improve to 2-0 in their ATP Head2Head Series.

On his resilience, Ruud said: "“It is quite a simple quote my dad told me when I was young. He used to go to an academy called Rick Macci and he would always tell my father that losers find excuses and winners find a way. This is a quote my dad has been telling me for many years. You always try to find a way. Today I did. I was down pretty much the whole match and I found a way luckily.”

Ruud has enjoyed a standout season, clinching titles in Geneva, Bastad, Gstaad and Kitzbühel alongside his San Diego triumph. He has won the most tour-level trophies this year and became the first Norwegian to crack the Top 10 in September.

Digging deep and bouncing 🔙@dieschwartzman edges past Dan Evans in three to reach the fourth round for the first time in his career. #BNPPO21 pic.twitter.com/tHuMG3gCAI

The 29-year-old, who is making his fourth appearance in California, saved two match points in his second-round victory over Maxime Cressy and backed this up against Evans, rallying from a set and 2-4 down to advance after two hours and 53 minutes.

You May Also Like: Zverev Qualifies For 2021 Nitto ATP Finals
With his victory, Schwartzman now leads Evans 2-0 in their ATP Head2Head Series after also defeating the Brit in the first round at the Western & Southern Open in August.

Earlier this season, Schwartzman, who is currently No. 15 in the FedEx ATP Rankings, captured the fourth tour-level title of his career on home soil in Buenos Aires. The Argentine arrived in Indian Wells in good form, after reaching the quarter-finals in San Diego at the start of October.

Evans was making his third appearance in Indian Wells and, like Schwartzman, was attempting to advance to the fourth round at the BNP Paribas Open for the time.