The eighth seed rallied from losing a see-saw first set to seal a 5-7, 6-3, 6-2 semi-final victory against Casper Ruud at the National Bank Open Presented by Rogers on Saturday, his fourth consecutive three-set victory of the week.

After Ruud impressively recovered a 0-3 deficit to take the opening set, Hurkacz regained his composure to dictate the rest of the proceedings with some aggressive hitting and level the pair’s ATP Head2Head series at 1-1. The Pole’s power from deep brought him regular success against the Ruud delivery, with Hurkacz converting five from eight break points en route to a two-hour, two-minute victory at the ATP Masters 1000 event.

Hurkacz had already battled past Emil Ruusuvuori, Albert Ramos-Vinolas and Nick Kyrgios in matches that went the distance this week in Quebec. Despite the demanding nature of his victories, Hurkacz was confident he would be ready to bring his best for the final, where he will face Pablo Carreno Busta, who downed Daniel Evans in 7-5, 6-7(7), 6-2 on Saturday evening.

“It’s OK," said the Pole, who has now triumphed in his past six three-set matches. “Physically I feel good. I’ve been putting a lot of work in these past weeks. So far, so good!"

Hurkacz had initially started well and broke Ruud’s serve immediately on the way to a 3-0 lead, but the Norwegian dug deep and demonstrated the sort of resilience that has earned him three ATP Tour titles in 2022. He reeled off three games in a row before producing a high-quality return game at 5-5 to earn a second break of the Hurkacz serve, which had proved impenetrable in the quarter-finals against Kyrgios.

With his serve under pressure, it was Hurkacz’s return game that dragged him back into the match in the second and third sets, with the Pole striking particularly cleanly off his backhand wing. He broke serve twice in each set to seal what was ultimately a comfortable victory and reach his second final of the season.

Hurkacz’s desire to stay on the front foot in rallies proved crucial to his comeback win. The INSIGHTS Conversion statistics show this was particularly decisive in the third set, when Hurkacz won 80 per cent (16/20) of points when attacking, well above his average of 70.4 per cent for the week in Montreal so far. 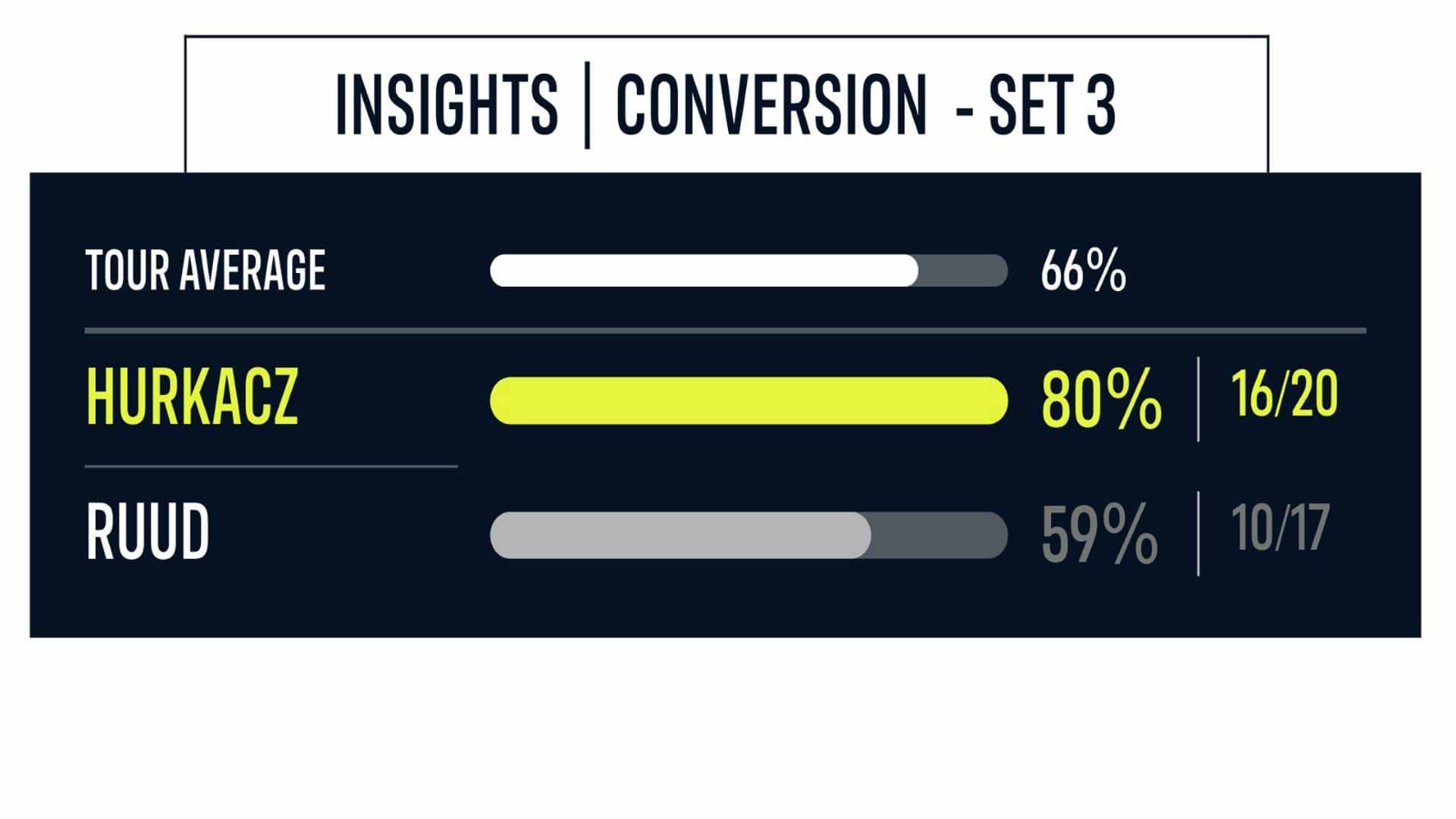 Halle champion Hurkacz is chasing his second title of 2022 and his second at Masters 1000 level, following his victory in Miami in 2021. The 25-year-old's run to the final in Montreal has lifted him two spots to ninth in the Pepperstone ATP Live Race To Turin, with Hurkacz set to rise to fifth if he claims the title as he looks to qualify for the Nitto ATP Finals for the second straight year.

“The finals are always very tricky," said Hurkacz. "The best players from each half are playing there, so obviously whoever I’m going to play will have a lot of momentum, a lot of confidence. It’s just going to be a super tough battle.”