Hubert Hurkacz got a double dose of good news Wednesday when he boosted his Nitto ATP Finals hopes at the direct expense of qualification rival Aslan Karatsev, cruising past his fellow Turin contender 6-1, 6-3 to reach the quarter-finals in Indian Wells.

The 24-year-old, who also advanced to the last eight in California in 2019, clinched his third tour-level title of the season in Metz last month and is in ninth spot (2,955 points) in the FedEx ATP Race To Turin.

The eighth seed is aiming to make his debut at the season finale, to be held at the Pala Alpitour in Turin from 14-21 November. Hurkacz hit with consistent depth against Karatsev as he dictated from the baseline to advance after 64 minutes.

On trying to qualify for the Nitto ATP Finals, Hurkacz said: “Of course, you want to be there. It's the last tournament of the year for the eight best players in the world, so you try to do your best. You know, just trying your best and whoever is gotten there, that meant they had a better year than you.”

Hurkacz has now levelled his ATP Head2Head series with the Russian at 1-1, gaining revenge from his defeat to Karatsev in San Diego in September. He will next face top seed Daniil Medvedev or Bulgarian Grigor Dimitrov in the quarter-finals. The Pole is yet to drop a set in Indian Wells, having overcome Alexei Popyrin and Frances Tiafoe in his first two matches.

"Today’s performance was good on my side,” Hurkacz said. “I returned well. I was making a lot of balls. I was also getting some free points on the serve, so that was very important for today's game.”

Earlier this year, Hurkacz lifted the trophy at the Delray Beach Open by VITACOST.com, before he captured his first ATP Masters 1000 crown at the Miami Open presented by Itau.

Karatsev, who was making his debut in Indian Wells, sits 12th (2030) in the FedEx ATP Race To Turin. The 29-year-old was aiming for a strong run in California to close the gap on those above him, with 10th placed Jannik Sinner (2595) still alive in Indian Wells.

Fellow Turin hopeful Casper Ruud, who began the match in seventh spot (3,015) in the FedEx ATP Race To Turin, was unable to follow in Hurkacz’s footsteps as Diego Schwartzman beat him 6-3, 6-3.

In an entertaining clash, Schwartzman played aggressively and manoeuvred Ruud around the court, breaking four times to advance after one hour and 44 minutes.

“It is a big win because I was trying to find my best tennis,” Schwartzman said. “At the beginning of the year I was very tired, it was not easy for the South American players to be travelling all the time. [With] no way to go back home, it was very tough. Sometimes your mind is not there. Since Roland Garros, when the bubbles finished on the ATP Tour, I started to feel a little bit better and I am practising better than before.” 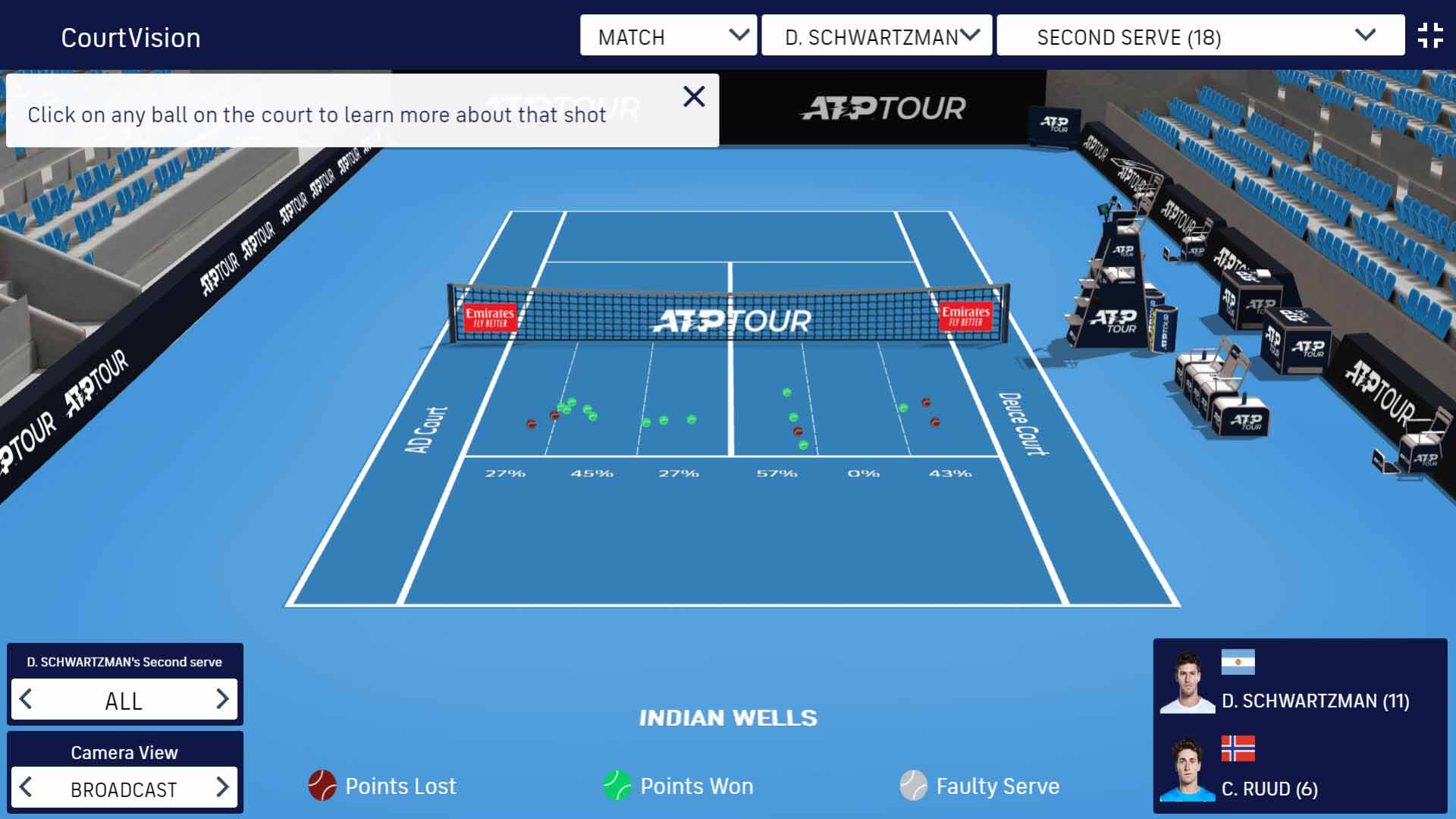 You May Also Like: Wednesday Preview: Medvedev Meets Dimitrov, Turin Hopefuls In Pursuit

The Argentine had never been beyond the third round in six previous appearances in Indian Wells. He will face Los Cabos champion Cameron Norrie or American Tommy Paul in the quarter-finals.

"I am playing better, I am feeling better,” Schwartzman added. “I am running, I am hitting winners, I am serving better and returning better. The confidence is high right now, so now is a good time.”

Schwartzman lifted the trophy on home soil in Buenos Aires in March and will be aiming to reach his second tour-level semi-final of the season in Indian Wells.

Having lost his past two meetings against Ruud, Schwartzman now leads the Norwegian 5-2 in their ATP Head2Head Series. The 29-year-old saved two match points in his first-round victory against Maxime Cressy and battled from a set-and-a-break down in his second match against Daniel Evans.

Ruud, who was making his main draw debut at the BNP Paribas Open, captured his fifth tour-level title of the season in San Diego at the start of October. Like Hurkacz, the 22-year-old is aiming to make his debut at the Nitto ATP Finals in November.