ATP Staff
This article contains:
Argentine will play World No. 1 Djokovic for the title

Diego Schwartzman reached his first ATP Masters 1000 final on Sunday, battling past Denis Shapovalov 6-4, 5-7, 7-6(4) in the semi-finals of the Internazionali BNL d’Italia.

"I'm very, very happy. I think today was a crazy match, it was really tough for us," Schwartzman said on court after his victory. "On my side I'm very happy because I have the win."

The Argentine upset nine-time Rome champion Rafael Nadal on Saturday evening in what he called his "best match ever". But things got even better for the eighth seed at the Foro Italico, as he worked incredibly hard over three hours and 15 minutes to earn the biggest win of his career in the longest match of the tournament. One thousand socially distanced fans were allowed to watch play for the first time in the event.

Shapovalov threw every trick in his deep arsenal at Schwartzman in their marathon, serving for the match at 5-4 in the third set, but the 28-year-old never went away. The Canadian played his very best tennis in a jaw-dropping display of shotmaking, but Schwartzman made the 21-year-old lefty finish the job, which he could not.

The physicality of the match wore on the Canadian as the match eclipsed the three-hour mark. Shapovalov hit his eighth double fault to fall behind by a mini-break in the tie-break. Schwartzman, however, remained rock solid, triumphing on his first match point when the lefty dumped a forehand into the net. The veteran won 57 per cent of his second-serve return points and converted six of his 14 break points.

Schwartzman will play World No. 1 Novak Djokovic on Monday in his first ATP Masters 1000 championship match. If the Argentine wins, he will crack the Top 10 of the FedEx ATP Rankings for the first time. If he loses, Shapovalov will accomplish the same feat.

"I have two dreams tomorrow. One is winning a tournament like this and the second one [is being] Top 10," Schwartzman said. "I need to play more than my 100 per cent. I don't want to say [it will be] impossible, because it's not impossible. I know I can beat him. But it's going to be very difficult."

The three-time ATP Tour titlist is the first Argentine to reach the Rome final since Guillermo Coria in 2005 (l. to Nadal). The last player from his country to lift the trophy at this event was Alberto Mancini in 1989. 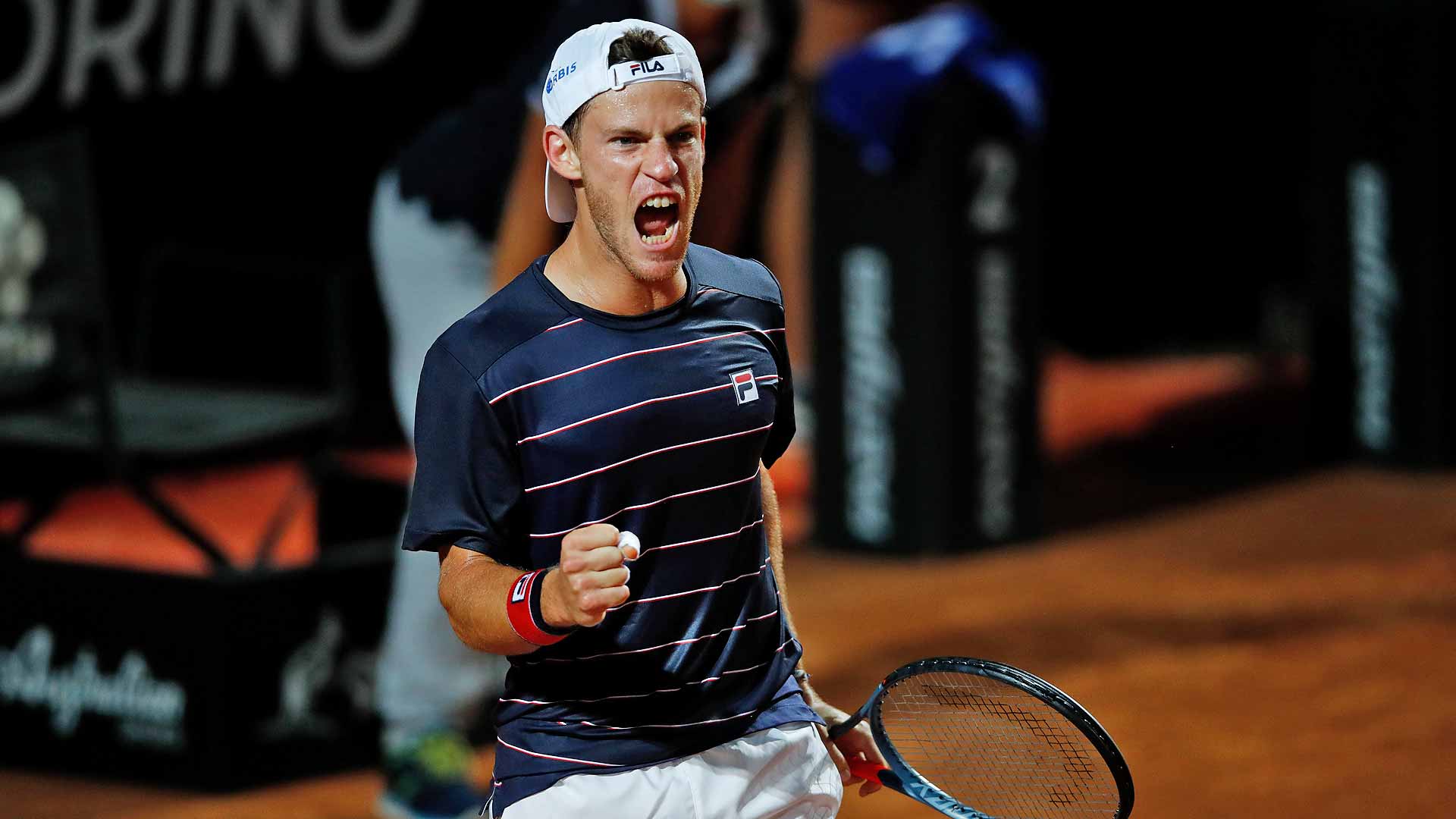 Photo Credit: Clive  Brunskill/Getty Images
Schwartzman had his back against the wall throughout the third set. Shapovalov was firing on all cylinders and the dam was seemingly ready to break at any moment. But the Argentine refused to lose.

"I think it was a great match from both of us. I feel like we both deserved to win today, so I don't think there were any keys," Shapovalov said. "It was just a couple of points that made the difference."

Shapovalov lost an early break advantage in the third set by hitting his sixth double fault. He did not get frustrated, continuing to display good shot selection, waiting for the right shot to fire away off both wings. Schwartzman made a forehand unforced error into the net to give back the break.

But the roller coaster was nowhere near its end. There were six service breaks in the final set. The physicality of Schwartzman’s aggressive counter-punching game began to pay dividends, as Shapovalov was unable to get ahead in points with his explosive game as he served for a spot in the final at 5-4.

Schwartzman did a better job defending his second serve throughout the match, but he excelled in the decider by winning 52 per cent of his first-serve return points. Early in the match, the Canadian was able to earn short balls or serve and volley to put away floating returns. But there was none of that in the match's final stages.

Shapovalov was trying to reach his second Masters 1000 final. Last year, he lost against Djokovic in the championship match of the Rolex Paris Masters.

"It's big for my part to be able to go toe-to-toe against him from the back despite struggling with my serve," Shapovalov said. "I think it shows great improvement from me, and I'm really, really pleased with the way I was able to play."

Did You Know?
This battle was 17 minutes longer than the second-longest match of the tournament. Casper Ruud defeated Matteo Berrettini in two hours and 58 minutes in the quarter-finals.