January Leaderboard: In the last six years, a Top 10 player has won 24 of the 36 tournaments (67%) held in January, including four of six last season. Federer leads the way among active players on the ATP World Tour with eight career titles in the month of January. Djokovic and Ferrer have won a title in January in four of the past five years:

Nestor Eyes 1,000 Wins – For the second year in a row, Brisbane could see a player win 1,000 career matches. Last year Roger Federer won his 1,000th career singles match by defeating Milos Raonic in the final. Daniel Nestor is closing in on a historic doubles milestone. The 43-year-old Canadian is one match win away from becoming the first player in the Open Era to register 1,000 career doubles match wins on the ATP World Tour. Nestor is playing for the first time with Radek Stepanek. Nestor has a 9-2 career record in Brisbane, winning the title in 2012 (w/Mirnyi) and ’14 (w/Fyrstenberg).

Qatar ExxonMobil Open – World No. 1 Novak Djokovic makes his second straight appearance in Doha. Last year he lost in the quarter-finals to Karlovic. It was the only tournament all season he didn’t reach a final. Djokovic is joined by World No. 5   and ’14 champion Rafael Nadal, No. 6 Tomas Berdych and No. 7/reigning champ David Ferrer. Other seeds are No. 5 Feliciano Lopez, No. 6 Andreas Seppi, No. 7 Jeremy Chardy and No. 8 Leonardo Mayer. Nadal, who is the other former winner in the draw, also reached the final in 2010.

Novak in Opening Week – This is only the fourth time Djokovic is playing in the opening week of the ATP World Tour season. Last year he lost in the quarter-finals to Karlovic. In 2009, he played in Brisbane and lost to Gulbis in 1R. In ’07, he won the title in Adelaide in his tourney debut. Djokovic is trying to become the sixth player to rank No. 1 in his career and win the Doha title. Coach Boris Becker won the inaugural title in 1993. Other No. 1s to win the title: Stefan Edberg (1994-95), Jim Courier (1997), Marcelo Rios (2001) and Roger Federer (2005-06, ’11).

Finals Streak – Djokovic comes into Doha having reached the final in 15 consecutive tournaments, which is a record for the most in a season.

Rafa Finishes Strong – Nadal finished the 2015 season by compiling a 17-5 match record after the US Open. The 29-year-old Spaniard improved from No. 8 to 5 in the final year-end Emirates ATP Rankings by reaching the final in Beijing (l. to Djokovic) and Basel (l. to Federer) and SF at ATP Masters 1000 Paris (l. to Wawrinka) and Barclays ATP World Tour Finals (l. to Djokovic). Nadal has a 19-6 career match record in Doha, winning the title in 2014 (d. Monfils), his last hard court title, reaching the final in 2010 (l. to Davydenko) and SF in 2011-12.

Strong Doubles Draw  – The top seeds are World No. 1 Jean-Julien Rojer and Horia Tecau, who closed last season by winning the Barclays ATP World Tour Finals in London. The No. 2 seeds are the first-time duo of Jamie Murray and Bruno Soares. Murray is coming off his first Top 10 season (No. 7), having reached eight finals (w/Peers) and helping Great Britain to the Davis Cup title with brother Andy. Other notable teams in the draw are: 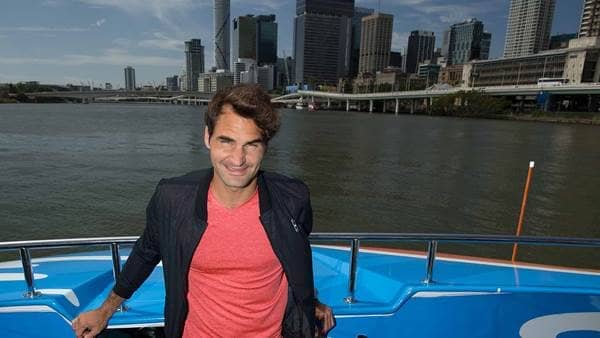 Brisbane International presented by Suncorp – Roger Federer returns to Brisbane for the third straight year. Last season the Swiss superstar won his 1,000th career match by defeating Raonic in the final. He made his Brisbane debut two years ago, losing in a three-set final to local favorite Lleyton Hewitt. Federer is joined by World No. 8 Kei Nishikori, who has reached the semi-finals the last three years. Other seeds are: No. 3 Marin Cilic, No. 4 Milos Raonic, No. 5 Gilles Simon, No. 6 David Goffin, No. 7 Bernard Tomic and No. 8 Dominic Thiem. Overall, eight of the Top 20 in the year-end Emirates ATP Rankings are in the field.

Swiss Maetro Back – Last season the 34-year-old became the oldest to finish in the Top 3 Emirates ATP Rankings at No. 3, winning six titles (second-most in ’15) in 11 finals (all five losses came to Djokovic). The Swiss superstar has finished in the Top 10 Emirates ATP Rankings for 14 straight seasons, 2nd-longest streak behind Jimmy Connors' 16 (1973-88). His 88 career titles is No. 3 in the Open Era behind Connors (109) and Ivan Lendl (94). Federer has won seven of his eight matches in Brisbane, falling only to Hewitt in the final two years ago.

Tomic Leads Aussie Hopes – Tomic, who finished as the No. 1 Aussie for the first time since 2011 at No. 18 in the Emirates ATP Rankings, is coming off his best career season. The 23-year-old won his third career ATP World Tour title in Bogota (d. Mannarino), a personal-best 40 matches and $1,188,195. The last Aussie to win an ATP World Tour title on home soil was Hewitt in Brisbane two years ago. Tomic has a 5-5 career record in Brisbane, reaching the semi-finals in 2012 and quarter-finals last year. There are four other Aussies in the main draw: wild cards James Duckworth,Benjamin Mitchell and John-Patrick Smith along with Sam Groth. Duckworth and Groth reached the quarter-finals last year.

Young Ones To Watch - The youngest player in the field is 19-year-old Korean Hyeon Chung, who finished No. 51 in the Emirates ATP Rankings last year and was named ATP Most Improved Player of the Year.

New Doubles Duos -- Henri Kontinen of Finland, a winner of a career-high five ATP World Tour titles last season, is teaming up with Aussie John Peers, who finished in the Top 10 for the first time at No. 8. Here are other notable teams in the main draw: Lukasz Kubot & Marcin Matkowski and Daniel Nestor & Radek Stepanek. 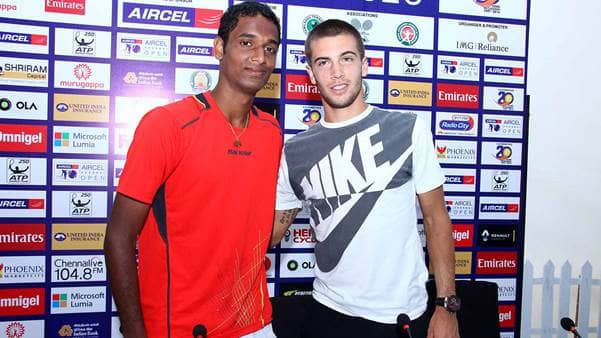 Aircel Chennai Open – The 21st edition of the only ATP World Tour tournament in India is led by top seed and three-time (2011, ’14-15) champion Stan Wawrinka, who is coming off his second straight No. 4 year-end ranking. The 30-year-old Swiss star is the top seed in Chennai for the third straight year. He is the only former winner in the field. The other seeds are: No. 2 Kevin Anderson,No. 3 Benoit Paire, No. 4 /’13 finalist Roberto Bautista Agut, No. 5 Guillermo Garcia-Lopez, No. 6 Gilles Muller, No. 7 Vasek Pospisil and No. 8 Borna Coric.

Stan the Man – Last season Wawrinka compiled his best season on the ATP World Tour, winning a career-high four titles (Chennai, Rotterdam, Roland Garros, Tokyo). En route to his second Grand Slam crown at Roland Garros, Wawrinka beat No. 2 Federer (QF) and No. 1 Djokovic (F) along the way. He compiled a personal-best 55-18 match record. Wawrinka is appearing in Chennai for the eighth straight year and he owns a 19-4 match record. Along with his three titles, he also reached the final in 2010. Chennai is the only tournament Wawrinka has won multiple times.

Anderson Eyes Top 10 – No. 2 seed Kevin Anderson is coming off a career-best season on the ATP World Tour with No. 12 Emirates ATP Ranking. The 29-year-old South African, who is making his Chennai debut, broke into the Top 10 for one week on Oct. 12. He captured his third career ATP World Tour title in Winston-Salem and advanced to his first Grand Slam QF at the US Open where he beat No. 3 Murray.

Coric on the Rise – No. 8 seed Borna Coric improved from No. 91 in 2014 to No. 44 last season in the Emirates ATP Rankings. The 19-year-old Croat finished as the youngest player in the Top 50. He won a personal-best 26 matches and reached semi-finals in Dubai and Nice along with three quarter-finals. Last year he lost in the 2R in his Chennai debut (l. to eventual champ Wawrinka).

Wild Cards in Field/Indian Title Hopes – Indian No. 4 (at No. 248) Ramkumar Ramanathan is the lone home country player in the main draw. There are three in the final round of qualifying. Ramanathan, who finished a year-end best No. 260 last season, is making his third straight main draw appearance in Chennai. Two years ago he qualified and beat countryman Somdev Devvarman for his first and only ATP World Tour main draw win. The other wild cards are Russians Karen Khachanov (19) and Andrey Rublev (18), who were two of 10 teenagers in the year-end Top 200 Emirates ATP Rankings. Khachanov finished No. 152 and Rublev No. 174.