In one of the most highly-anticipated matches of the Australian Open first round, Denis Shapovalov and Jannik Sinner delivered a classic on Monday at Margaret Court Arena.

Shapovalov snapped Sinner’s 10-match winning streak with a 3-6, 6-3, 6-2, 4-6, 6-4 win. The 21-year-old entered the match on a six-match losing streak, but he found his best level under pressure to hand the Great Ocean Road Open champion his first loss since last October’s Erste Bank Open in Vienna.

“Matches like this are so much fun for me to play,” said Shapovalov, in an on-court interview. “This is why I play the sport in front of fans like you guys, that are just so much fun for both guys. Win or lose, today is one of the matches that I am going to remember in my career, just because playing in one of these stadiums, the moment and the quality of tennis today, it was just so much fun to be out here.”

It was an incredible effort by Sinner, who was playing his fifth match in four days. The 19-year-old Italian played twice on Friday, saved one match point against Karen Khachanov in a three-hour semi-final at the Great Ocean River Open on Saturday and recorded a 7-6(4), 6-4 win over compatriot Stefano Travaglia in Sunday's title match.

Shapovalov fired 62 winners and won 74 per cent of net points (39/53) en route to victory. The Canadian No. 1 completed a perfect opening day for his nation, adding to straight-sets victories earlier in the day from countrymen Milos Raonic and Felix Auger-Aliassime. Shapovalov was aiming to avoid a second straight loss in the Australian Open first round, after falling to Marton Fucsovics in four sets at the same stage last year.

Sinner made the perfect start on Margaret Court Arena, as he ripped forehands and flicked a backhand passing shot winner to break at the first opportunity. Shapovalov served an ace down the T to avoid falling behind a double break at 1-4, 30/40, but he could not find his way back into the set. 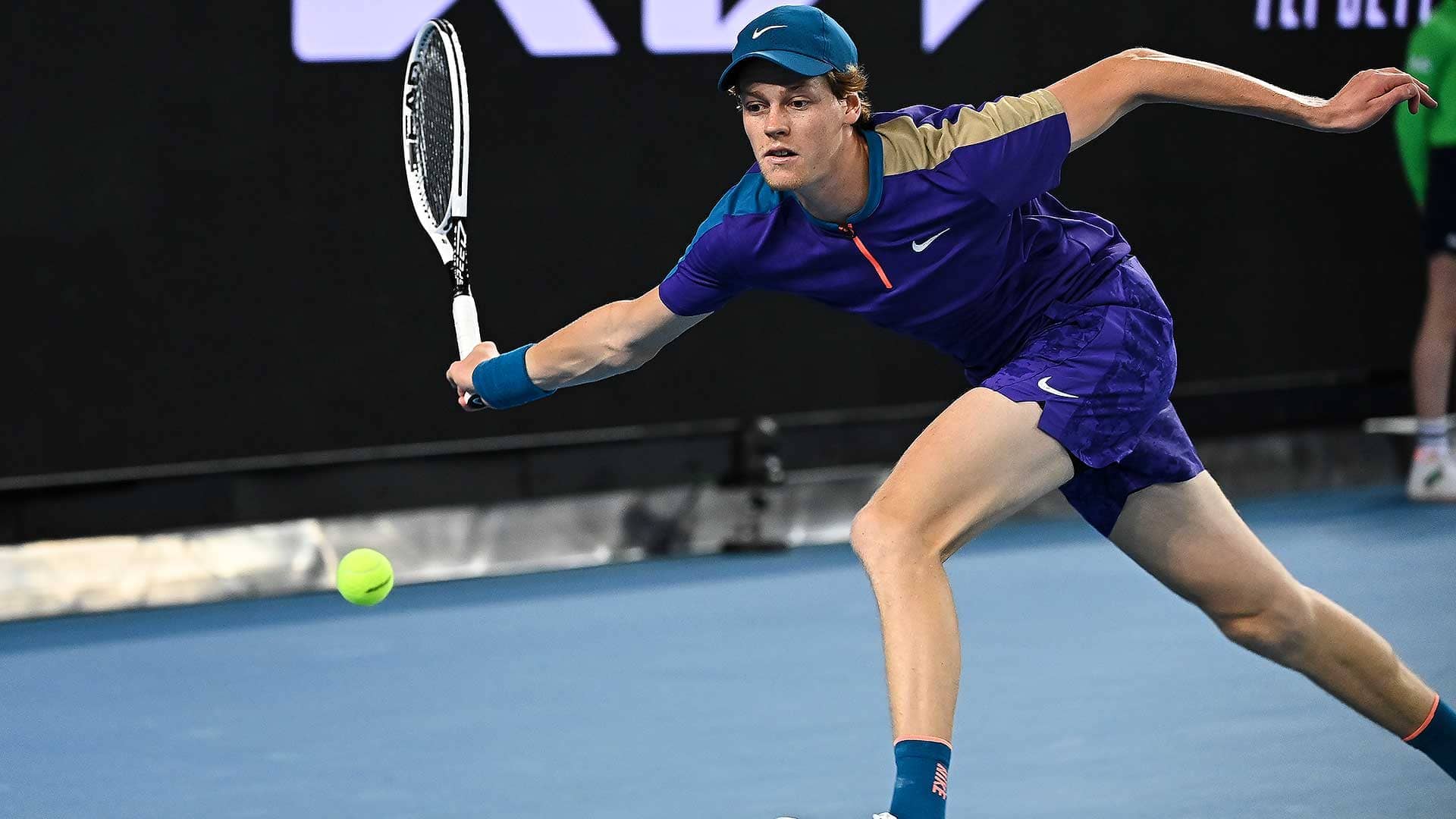 Sinner earned four break points in his opening two return games of the second set. Shapovalov saved them all. The 11th seed struck three unreturned serves and came to the net to escape danger and establish a 2-1 lead. When Sinner’s level dropped at 3-4, Shapovalov pounced. The Canadian took advantage of backhand errors to earn his first break points of the match and he converted his second opportunity with a powerful forehand down the line.

After holding serve to level the match, Shapovalov survived three more break points at the start of the third set as Sinner began to misfire on his forehand. The 6’1” left-hander found success coming to the net and he claimed back-to-back service breaks to move one set from victory.

Sinner committed forehand errors to concede serve early in the second set, but he trusted his groundstrokes and increased his aggression from 1-3 down to turn the set in his favour and force the match to a decider.

Shapovalov halted Sinner’s momentum in the opening game of the fifth set, as he moved the Italian out of position and fired forehands up the line to make an early breakthrough. The Canadian maintained that advantage to serve for the match at 5-4 and he clinched victory with a forehand winner up the line.

“You don’t want to play long five-set [matches] at the beginning of the tournament, but I am just really happy to get the win,” said Shapovalov. “Jannik is such a great opponent. Honestly, he is so talented, he is so great, such a great guy. I am really happy that he has been doing well. I am sure he is going to be a really, really good player. [He is] now, but in the future, for sure.”

You May Also Like: Djokovic Fires Warning To Australian Open Title Rivals

Sinner’s title run at the ATP 250 was his first appearance on the ATP Tour since he claimed his maiden tour-level trophy at the Sofia Open last November. The Italian is the youngest player to win back-to-back titles since Rafael Nadal, 19, at the 2005 China Open in Beijing and the Mutua Madrid Open.

“[Shapovalov] is a great player,” said Sinner. “He served better than me today. There were some difficult points, especially in the first game of the fifth set. He returned good on some points and then he served quite well. There was not much difference between him and I… He deserved to win today.”

Shapovalov will face Australia’s Bernard Tomic in the second round. The former Top 20 player was leading Yuichi Sugita 3-6, 6-1, 4-1 when the Japanese retired from their match on Court 8.

“It is better to play two-and-a-half sets, [like Tomic did], but I am going to try to recover as much as possible and get ready,” said Shapovalov. “Bernard has been a great player and he is a really tough opponent. He has got a great serve [and] he is super solid from the back. It is definitely going to be another tricky match.”

If Shapovalov gets through that match, he could meet countryman Auger-Aliassime in the third round. The Murray River Open runner-up continued his strong run of form with a 6-4, 6-2, 6-4 victory against Cedrik Marcel-Stebe.

Auger-Aliassime broke serve on six occasions and struck 25 winners to record his first win at the Australian Open. The seven-time ATP Tour finalist will face James Duckworth in the second round. The Aussie moved past lucky loser Damir Dzumhur 6-3, 6-2, 6-4 in one hour and 40 minutes.