Jannik Sinner will play Alex de Minaur on Monday for a spot in his first Australian Open quarter-final.

Youth will serve— and return —on Monday in the Australian Open fourth round. All but one of the day’s singles competitors are 25 or younger, with 33-year-old Marin Cilic the veteran outlier. Five are recent graduates of the Intesa Sanpaolo Next Gen ATP Finals, including former champions Stefanos Tsitsipas and Jannik Sinner, and two-time finalist Alex de Minaur.

Sinner, 20, is the youngest man remaining in the Melbourne draw following the five-set exit of 18-year-old Carlos Alcaraz. The 11th seed will take on de Minaur as both look to build on career-best AO runs, each with the loss of just one set.

The 22-year-old from Sydney has not beaten Sinner in their two tour-level meetings, including the 2019 Intesa Sanpaolo Next Gen ATP Finals title match. The Italian had the home advantage in that meeting, but that will flip this time around with the Melbourne crowd ready to back the last remaining Aussie in the men’s singles draw.

“I know what’s coming: immense firepower,” said de Minaur, who will return to Rod Laver Arena after Laver himself watched his third-round win over Pablo Andujar on the show court. “I’m going to have to be ready to… not get bullied around the court and really take it to him.” 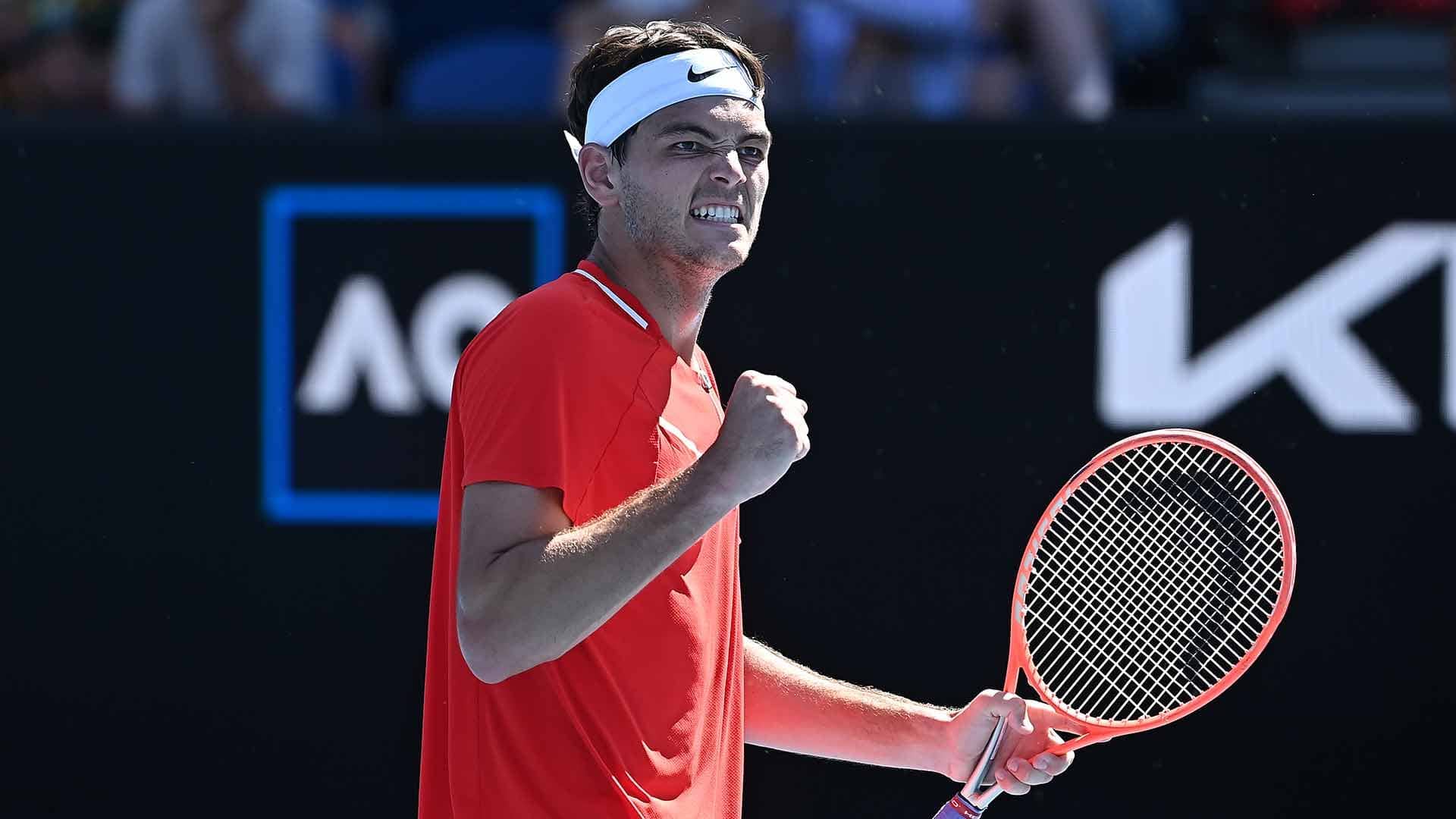 Photo Credit: Peter Staples/ATP Tour
In the same section of the draw, Tsitsipas will take on Taylor Fritz in another battle of under-25s, with the American playing in the first major fourth-round match of his career. Fritz earned that honour the hard way with a five-set win against Roberto Bautista Agut.

“It's huge,” said Fritz in his post-match press conference. “It seems stupid, like after that match I was almost close to tearing up a bit. So many people have made the second week of Slams, but it's just eluded me for so long… it means a tonne. I'm proud. It didn't come easy; I beat an incredibly tough guy.”

Across seven previous third-round major appearances, Fritz’s opponents have included Novak Djokovic, Roger Federer and Dominic Thiem. His 20th seed has protected him from that class of opposition this fortnight—until his meeting with the World No. 4 this round.

The two have shared the court many times as they came up the junior ranks together, and Tsitsipas holds a 2-0 edge in their ATP Head2Head record, with both wins coming on indoor hard courts in 2019 (Laver Cup, Rolex Paris Masters). Despite that record, Fritz said he doesn’t mind the matchup against the Greek.

In the bottom quarter of the draw—Daniil Medvedev’s section—the Russian will take on another American playing at this stage of a Slam for the first time. Maxime Cressy, the lone unseeded player remaining in the bottom half, will bring his serve-and-volley game to the crafty baseliner.

In the pair’s first ATP Head2Head meeting, the former UCLA star will be on the attack, regardless of Medvedev’s elite returning skills.

“I actually don’t even think about my opponent because they try many things,” he said after knocking off Australian wild card Christopher O’Connell in the third round. “He would try to return close or if that doesn’t work, far from the baseline… They try different things to get in my head and if I focus on them it disrupts my game. My mindset is to completely block off what my opponent does.”

The World No. 2 does things better than most on the tennis court, though Cressy does have the experience of playing both Stefanos Tsitsipas (2020 US Open) and Alexander Zverev (2021 Australian Open) at the Slams, with both matches ending in defeat after three tight sets. He also played Rafael Nadal in the final of the Melbourne Summer Set earlier in January — another straight-sets loss, albeit a tight one, too.

Medvedev, a chess-lover, is preparing to counter Cressy’s aggressive opening gambit: “We'll have to prepare well tactically, mentally,” he said in press, admitting to being unfamiliar with the American’s game. “I heard he serves pretty well. So if you don't have a good serve, probably you won't serve-and-volley, and it's not going to be effective,” he added with a smile.

“I do think it's possible, yeah, to be a top player like this. But like no matter what you do — slice, serve-and-volley, or return good — if you want to be at the top, top, you need to make it almost perfect, because other guys will try to break you and your style.” 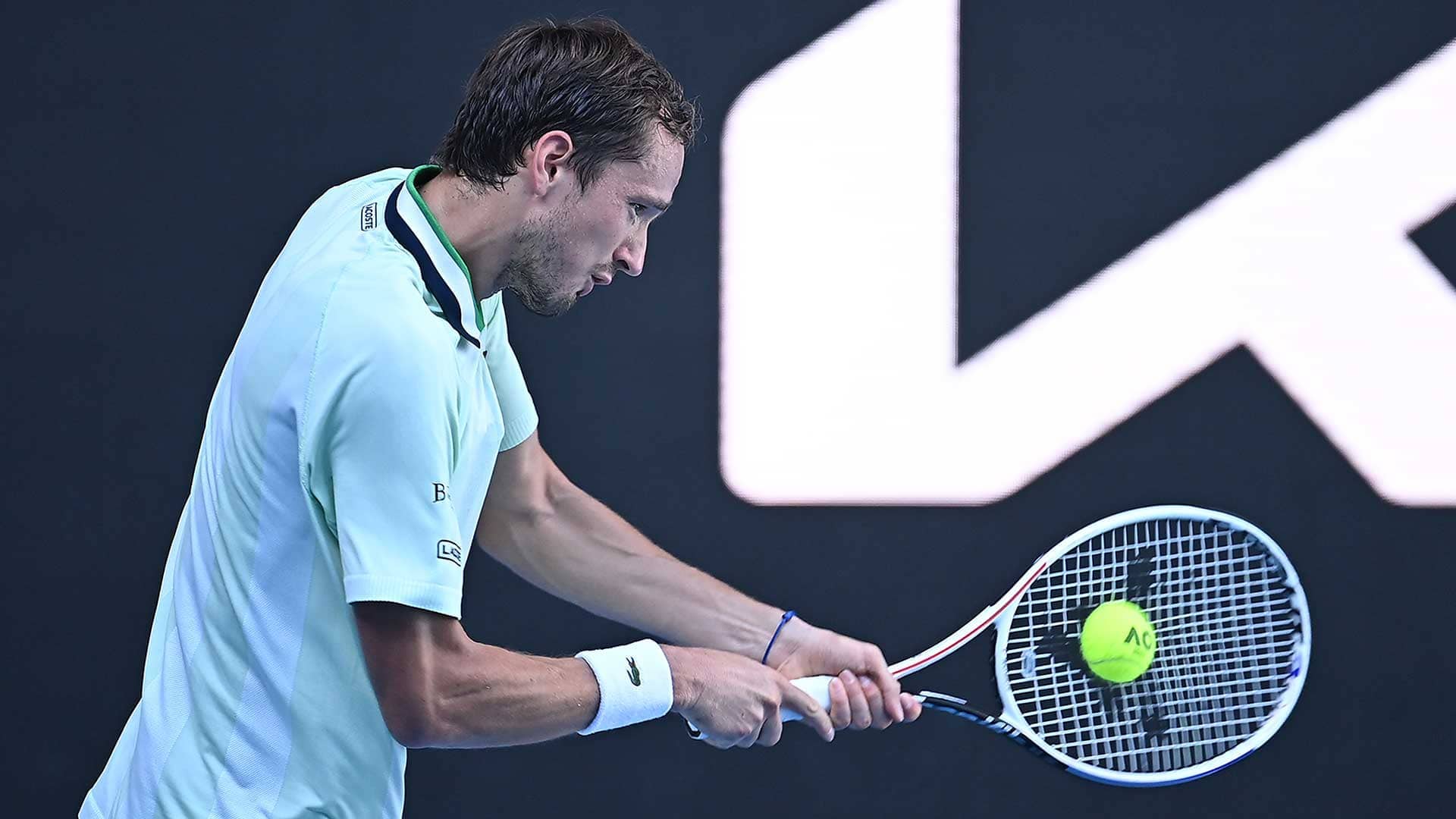 Photo Credit: Peter Staples/ATP Tour
The Medvedev-Cressy winner will face either Cilic or Felix Auger-Aliassime in the quarter-finals. The Canadian youngster is after his third straight Slam quarter-final after reaching the last eight at Wimbledon and the final four at the US Open last season. He’s gotten progressively sharper over the course of his Melbourne run, advancing in five, then four, then three sets in the early rounds, most recently with a clinical 6-4, 6-1, 6-1 win over 24th seed Daniel Evans.

Cilic’s last major quarter-final came in 2018, when he followed up an AO final run with last-eight appearances in Paris and New York. While he has not been able to find that form in recent years, he certainly showed it in a 7-5, 7-6(3), 3-6, 6-3 win over fifth seed Andrey Rublev in the fourth round.

Ahead of his match with FAA, 12 years his junior at 21, Cilic was asked if he enjoyed getting one over on the younger generation.

“Satisfaction is on a different path,” his veteran answer began. “Satisfaction is there because, I played an incredible match [against Rublev], and it gave me such a great excitement. At the moment I'm feeling really positive about myself. Obviously worked a lot and went with lots of ups and downs. Then a couple of difficult seasons. And to play this well, at this kind of a tournament, it's definitely, absolutely great satisfaction for me.”

Cilic was 25 when he won the 2014 US Open. Nearly eight years and two major finals later, his booming baseline game has him in title contention once more.

Monday’s slate will compete the men’s quarter-final draw in Melbourne, with the top half already set.