Andrea Gaudenzi presents Jannik Sinner with an award for cracking the Top 10 of the FedEx ATP Rankings.

Behind The Scenes Of Sinner's Emotional Win In Turin

Jannik Sinner sat in player dining on Tuesday afternoon for lunch at the Nitto ATP Finals with recently retired Italian Paolo Lorenzi. According to the 39-year-old, his countryman was talking about anything but tennis.

“He was just saying, ‘Maybe I have to do better next year. If I’m in the top eight I don’t have to wait for someone else’,” Lorenzi recalled. “That is the key to his level so young.”

Although he did not show it during the meal, Sinner knew there was a chance he would be competing that evening. Matteo Berrettini had hurt his left oblique on Sunday and his status was uncertain.

“He was nervous because I think he understood he could play,” Riccardo Piatti, Sinner’s coach, said. “He was waiting for Matteo’s decision.”

You May Also Like: Sinner Soaks In Turin Debut: ‘I Feel Good On These Courts’

Both Sinner and Piatti were back at the hotel waiting for news when Berrettini texted Sinner at around 5 p.m. This year’s Wimbledon finalist told his younger countryman he would be withdrawing, moving the 20-year-old into the field.

“Matteo sent Jannik a message saying to warm up and have fun,” Piatti said. “When Jannik told me that, I said, ‘Listen, Matteo told you the most important thing. You need to go on court and have fun.’ Enjoy the moment, I told him.

“All year, everybody practises, plays and tries to win to be in this type of atmosphere. When you’re there, you need to enjoy that. That is why it was so nice for Jannik, I think.”

Sinner’s team quickly arranged a 6:30 p.m. practice session and went to the Pala Alpitour to get ready. But mentally, the 2019 Intesa Sanpaolo Next Gen ATP Finals champion was already in a good place. 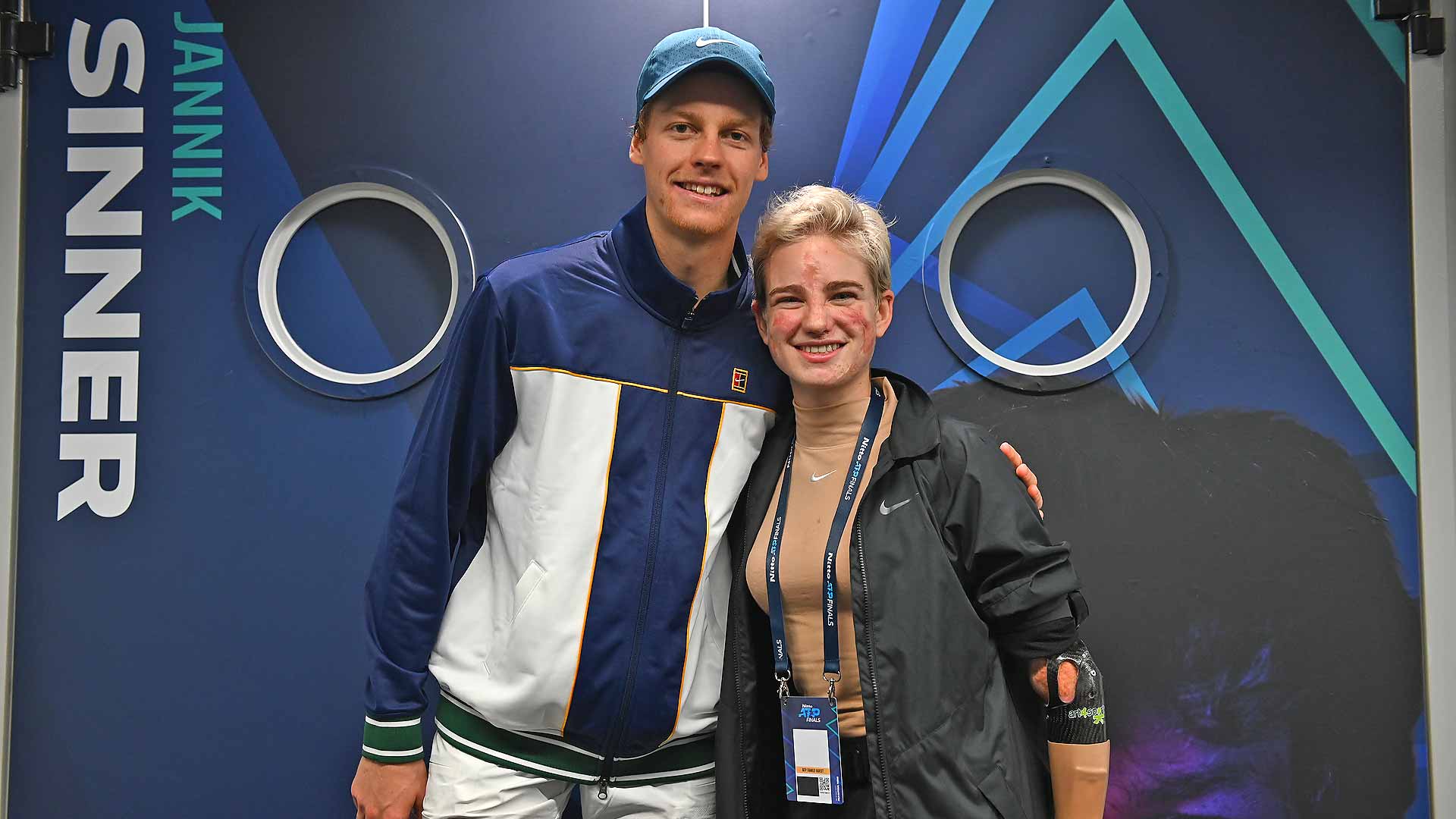 Jannik Sinner celebrates his first Nitto ATP Finals win with Bebe Vio. Photo Credit: Corinne Dubreuil/ATP Tour.
Sinner was smiling all evening as he shone under the spotlight. The Turin crowd was fully behind its man as the Italian defeated Hubert Hurkacz 6-2, 6-2 in an impressive display. After his victory, Sinner stepped to the microphone for his on-court interview and received a standing ovation. He had to step away from the mic a few times to acknowledge the fans before the crowd quieted down enough to speak.

“Of course the atmosphere is amazing playing here, cheering for me and for Italy. We try. I think playing in Italy is special because you stick together, you want to win together, and I had this feeling today,” Sinner said later on during his press conference. “When the whole stadium is playing against one guy, it's not easy. A lot of credit to the crowd. I'm very happy.”

“I’m Italian and have been at the [Nitto ATP Finals] with my players six times,” Piatti said. “For me to be here in Italy, in Torino, with an Italian player whom I started working with when he was 13, 14 years old, was a great feeling. The atmosphere in the stadium was unbelievably nice.”

The home favourite did several broadcast interviews in the nearby flash zone, with plenty of photographers and camera operators around to document the emotions of the moment. Sinner’s locker room is the first in a long hallway, and when he arrived there he met Beatrice ‘Bebe’ Vio, an Italian paralympic fencing champion.

They spoke for a few minutes before taking pictures, and Sinner then spent some time in his locker room, where Piatti was finally able to talk to him. 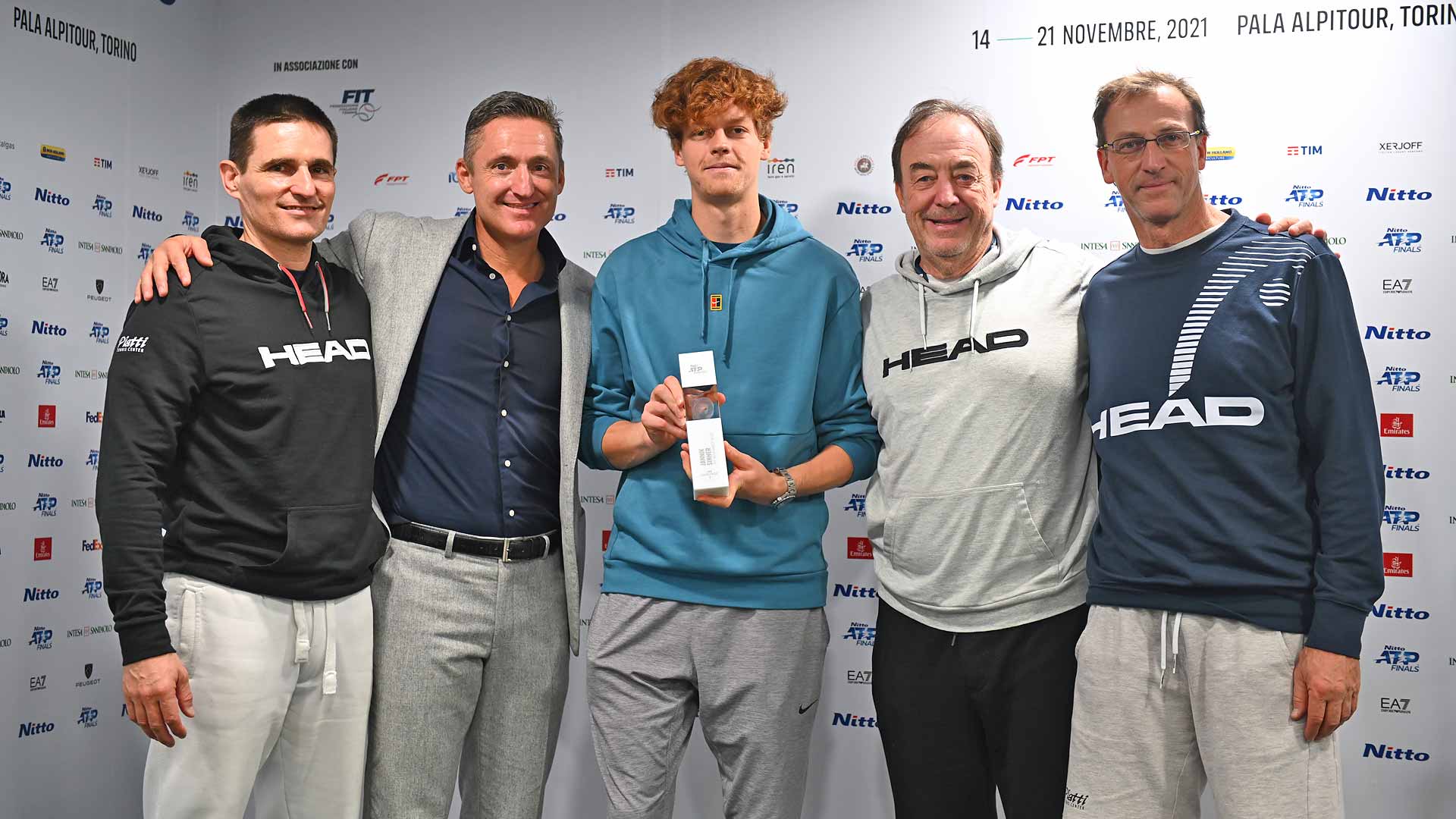 Photo Credit: Corinne Dubreuil/ATP Tour.
Sinner then walked to his press conference to speak to the world’s media before heading back to the hotel for the evening.

“For me it was difficult to sleep, but I think he slept well,” Piatti said. “We went around 12 o’clock on site today. He saw the physio, we ate there. The Italian chairman of the ATP, Andrea Gaudenzi, gave him a trophy for being in the Top 10. That was very good because it was an Italian chairman giving it to an Italian player. I don’t think that’s happened many times!

“Then we practised for one-and-a-half hours at Stampa Sporting Torino [practice courts] and are now back at the hotel.”

Sinner is preparing to face World No. 2 Daniil Medvedev on Thursday evening. If Alexander Zverev defeats Hurkacz earlier in the day, Sinner will be eliminated from semi-final contention. According to Piatti, “He needs to live with that problem.” If Hurkacz triumphs and the Italian upsets Medvedev, the home favourite will reach the knockout stage of the season finale.

But regardless of what happens, it is impressive enough that Sinner made Turin as an alternate and took advantage of his opportunity when Berrettini withdrew. The atmosphere inside the Pala Alpitour on Tuesday is one he will never forget.

“It’s something that I was dreaming for him. I already had that moment with the other players I coached, so I knew young players want and enjoy that moment,” Piatti said. “I’m very proud of what he is doing.”