Jannik Sinner, the 2019 Next Gen ATP Finals champion, is still learning about the sport and growing.

Sinner: 'I Want That Feeling More And More'

In the immediate aftermath, there was disbelief. Jannik Sinner was lost for words and Riccardo Piatti planted a kiss on his protégé's head, before his phone started buzzing at the conclusion of the 2019 Next Gen ATP Finals. Sinner, who had been unranked 21 months earlier and had attended the innovative 21-and-under tournament as a spectator in 2017, had little time to celebrate as he was committed to play at the Sparkasse Challenger in Ortisei, a short distance from his childhood home. But the triumph over Alex de Minaur in the Milan final left a distinct impression, with Sinner telling ATPTour.com, “I was happy and excited that I’d held up under pressure in front of a home crowd in Milan, but in another way, I realised I wanted that feeling more and more.”

Piatti, who’d celebrated his 61st birthday a day earlier, had raised a glass to celebrate in the locker room, but the Italian was also looking to the future. “Jannik’s mentality is like the sport; he loves the sport,” Piatti told ATPTour.com. “I like my job and have done it for 40 years. He is the same, he loves his sport, and he wants to be better, improve and he is doing everything for that. He is watching a lot of matches, practising a lot, and not because he is obligated to do so. Because he knows what he wants. It’s very easy to dedicate your life for one or two years, but I’ve been trying to tell Jannik he needs to dedicate his life to the sport for 15 years.”

The following week in Ortisei, 6'2" Sinner captured his third ATP Challenger Tour crown of 2019 (also Bergamo and Lexington), ending a season that had seen his rise from No. 551 to a year-end No. 78 in the FedEx ATP Rankings. “I was always searching for a higher level, wondering if I was good enough to beat guys at different levels: [ITF] Futures, Challenger and most recently, the ATP Tour,” says Sinner, who in 2019, became the youngest player in the year-end Top 80 since 17-year-old Rafael Nadal finished 2003 at No. 47.

“I was in good shape and felt well on the court, but it became less about confidence and more about executing my game plan: what I wanted to do, rather than be dictated to," says Sinner. "A crowd can give you energy, which is very important for a player, then it’s down to staying calm and not being nervous. Winning the Bergamo title [the Trofeo Perrel - Faip] early in 2019, having twisted my ankle the year before, was certainly a trigger to improve again, and once I beat Gael Monfils [at the European Open] at Antwerp in October, I knew how far I could go.” 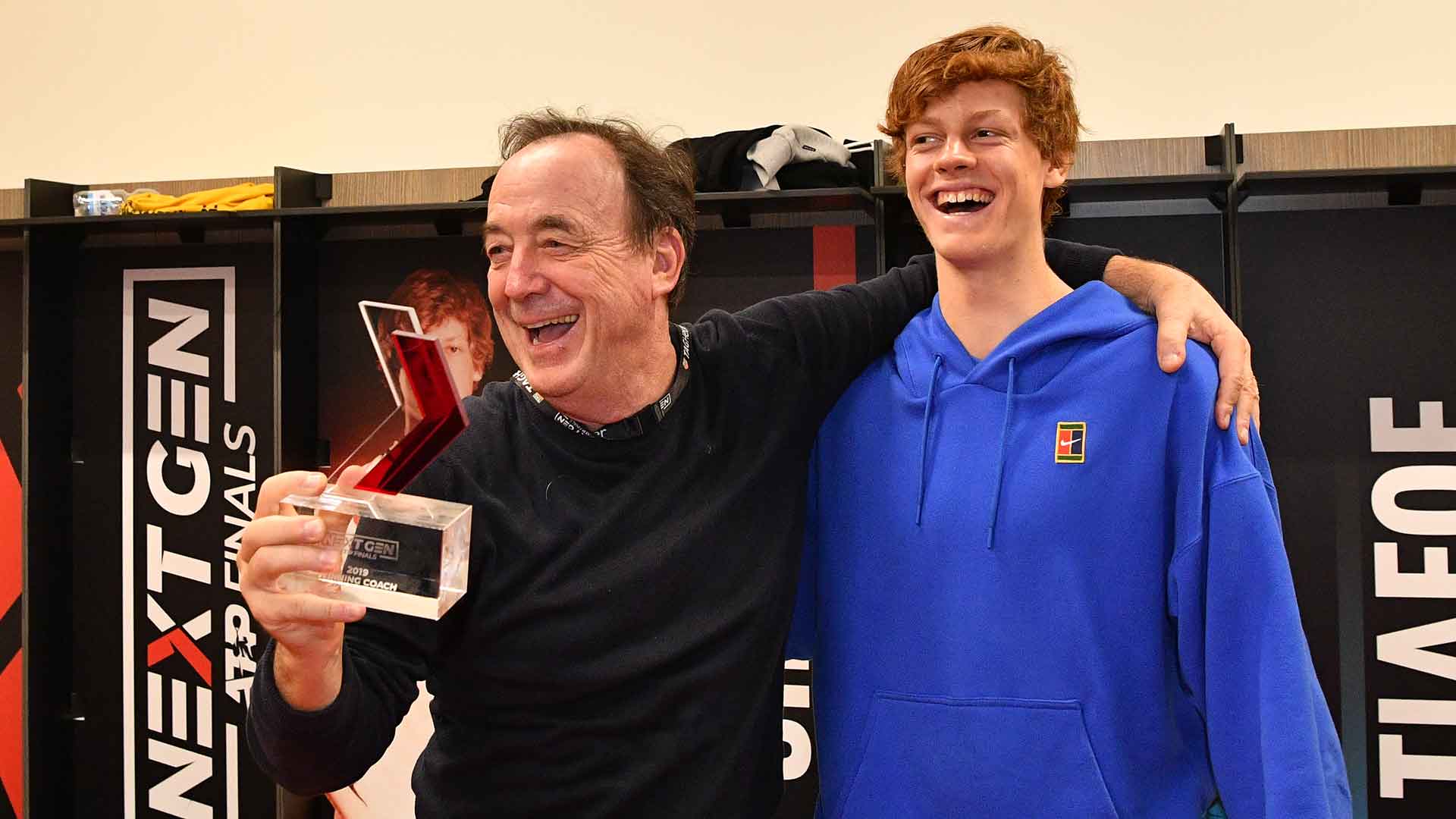 The former junior skiing champion hailing from San Candido, in northern Italy close to the Austrian border, decided upon tennis — forgoing football, alpine pursuits and being with friends — to move as a 13-year-old to join Piatti at his academy in Bordighera. Sinner’s parents, Johann, a chef in a chalet in Val Pusteria, and his mother, Singlinde, instilled the need for an education and to work hard from an early age, so their son's initial trips to Piatti, prior to deciding to move to the tennis centre full-time in late September 2014, were well-considered.

“I never doubted myself about being a good tennis player, as I am a hard worker, but I was skinnier and smaller than I am now,” says Sinner, who initially lived with coach Luka Cvjetkovic, who had two sons the same age. “I was fast and came to the net, but I needed confidence to find my level. In tennis you can win matches or a tournament, and you can also lose three or four first rounds in a row, so the decision to play at higher levels than my age was a big decision. I certainly went down the tougher route, but it helped build the expectation and pressure that I put on myself. You feel you need to win this match, or this exact point and you overdo it, but you have to understand the outcome and it’s a learning process every day.”

Piatti’s decision to thrust right-hander Sinner into competition with older opponents was vindicated. “He was working a lot and not dreaming,” says Piatti, reflecting on his early impressions of Sinner. “He went to some tournaments, losing 6-1, 6-0, but came back a day later to the Academy and trained the next day with the same attitude. He wanted to become good and kept going. We started with Futures and Challengers. He surprised himself about his level. When he started to beat a higher-ranked player, he understood his level and it was not a surprise anymore. When he won Bergamo, the first thing I told him was, ‘Very good, but the level of the other player was not as good. Don’t be surprised you won the Challenger, you’re better than the other, but now we need to find better players.’ It was always about playing older opponents. When he was 15/16, I also put him in a prize money tournament against older players in order to see if he could find solutions. I wanted to show him older players don’t give a s*** about him.”

Claudio Pistolesi, the 1985 junior World No. 1, who early in his own career was coached by Piatti, believes Sinner is on the right path. “He is very complete: physically, technically and mentally,” the Florida-based Pistolesi told ATPTour.com. “He was not only a skier, but, like Lorenzo Sonego, who played football until the age of 14, he has broken all the rules that you follow from an academy perspective, having done another sport to a good level. He brings some lateral skills to tennis from skiing in his movement around the tennis court, and he steps into the ball automatically.

“The Academy and Piatti can protect Jannik from the mistakes of the past over Italian player development. There is tutoring and mentoring, which Piatti is a good at, as well as using his network to prepare Jannik for training and the very highest level possible. It’s right that at present Jannik prioritises his own career, his team.” 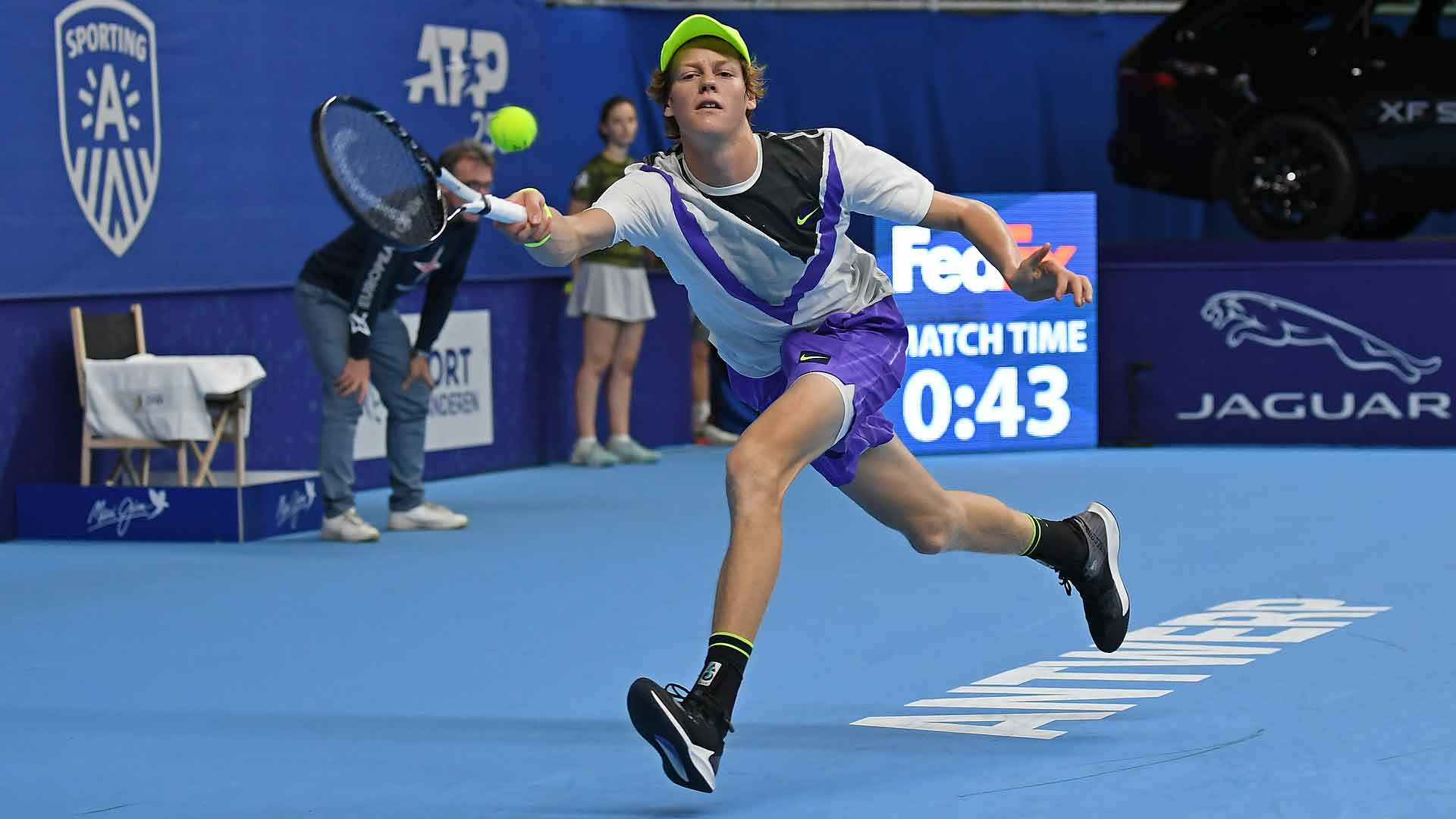 The 18-year-old Sinner has developed terrific speed off both forehand and backhand — something Roger Federer picked up on last year — and is quick to move up the court, taking time away from his rivals. Piatti, who first noticed the potential when he watched a 12-year-old Sinner, recalls, “I was in Milan at a tournament and I saw him lose 6-1, 6-2, but he was the only player who tried to change his game. He had the attitude to win, not just put the ball over the net and hope. You could tell he was calm and could control his mind, he struck the ball nicely, but he didn’t have the power.

"His personality is now strong and, unlike many players I’ve coached, I can speak to him openly 30 minutes after a loss, rather than wait until the next day. I can speak with him for six hours about tennis and he loves it. He doesn’t get distracted and prefers to watch Nadal-Federer matches let’s say, than go to the cinema.”

Sinner is currently working on his fitness in Monaco, such are the concerns over the Coronavirus pandemic in Italy, where the number of confirmed cases has risen beyond 35,000. “He came back from the United States last Friday and he has since trained once in the morning and once in the afternoon,” says Piatti, who worked with Djokovic when the future World No. 1 was aged 17 and 18. “The Monte-Carlo Country Club, venue of the Rolex Monte-Carlo Masters, is closed, but if the numbers stabilise and confirmed cases drop, we’ll return to Italy and the Academy. There won’t be any on-court tennis for another week or 10 days. We don’t know when the tournaments will begin, so as to step up our efforts in one area or another.

“A doctor has followed him and we expect him to grow a little bit more, around another four centimetres. He needs to play and work, but we need to find the right balance in not pushing him too much. When he’ll be 22, 23, he’ll be ready to compete in the bigger tournaments.”

Sinner is now learning that to win big — as Djokovic, Nadal and Federer have done for so many years — is complicated. “The focus is about consistency of performance, of application every day, and improving every shot, because in matches an opponent won’t let you always play your best stroke and you cannot play at the same speed,” says Sinner, who has practised with Stan Wawrinka, whom he lost to in his first ATP Tour semi-final at Antwerp in October 2019, David Goffin and Grigor Dimitrov in the past as a way to gauge his level. “Piatti knows that I’m attentive and demand a lot of myself, but I do work hard.

"He asks for patience, so I need to be patient.”