Cedrik-Marcel Stebe played in the snow at Munich in 2016.

Editor's Note: ATPTour.com is resurfacing features to bring fans closer to their favourite players during the current suspension in tournament play. This story was originally published on 24 April 2016.

Rain in Bucharest, snow in Munich... Players encountered both ends of the weather spectrum on the ATP Tour on Sunday.

While the singles and doubles finals at the BRD Nastase Tiriac Trophy were postponed due to persistent downpours, competitors at the BMW Open by FWU AG fought through the snowflakes ahead of the outdoor clay-court tournament.

Qualifying at the ATP World Tour 250 event was briefly halted due to a snow shower that hit Munich, and main draw players practising at the venue were also given a unique opportunity by Mother Nature.

"I have never seen anything like this before," said John Peers, who is seeded third in the doubles draw with Henri Kontinen. "It's the first time at an outdoor tour-level event that I have seen snow and matches had to be suspended. Being Australian it was definitely something different. We actually got lucky as it didn't snow during practice, but literally right before and right after it did. It was so cold and our hands were frozen. Apparently we could get some more over the next day or two. Time to rug up I think."

Less than two weeks ago, Neal Skupski was battling the heat and humidity at the ATP Challenger Tour stop in Sarasota, Florida. On Sunday, he and brother Ken were bundled up, hitting through the hail and snow in preparation for their first-round clash against home hopes Dustin Brown and Florian Mayer.

"It was actually my second time hitting in the snow," Skupski added. "Many years ago I remember clearing the court back home (in England) with Ken to try it out for a bit of fun, but it's not the same as practising for an ATP World Tour event. It was good to practise in it today because we may have to get used to it for this week's tournament, looking at the weather forecast!" 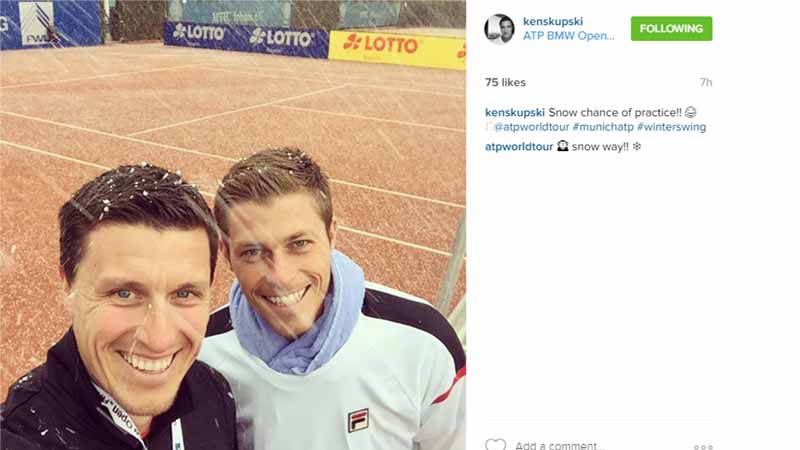 Canada's Vasek Pospisil, seeded seventh in singles, experienced a taste of home weather with the April snow. He took to Twitter to comment on the rare conditions.

"We heard that it might snow today and I have to admit I was a bit excited because I rarely get to see snow anymore," said Pospisil. "I started the day with a run outside and it was snowing a bit, which was good enough for me. It seemed to clear up but then it started snowing again when I began practising a few hours later. It was coming down pretty hard at one point. It was the first time I have played in snow as a professional and I have to admit that, although I had played in snow as a youngster growing up in Canada, I didn’t think it would ever happen again. It actually made me feel right at home this week. Canadians don’t shy away from cold weather."

Main draw action in Munich gets underway on Monday, with snow in the forecast for much of the week.