ATP Staff
This article contains:
ATPTour.com looks back at one of the biggest upsets in history

Editor's Note: But for the COVID-19 pandemic, Roland Garros would now be in its second week. ATPTour.com is continuing to look back on memorable matches and happenings at the clay-court Grand Slam, which tournament organisers are now hoping to stage in September. This story was originally published on 31 May 2019.

Ten years ago today, Robin Soderling pulled off what remains one of the biggest upsets in tennis history. The Swede, who ascended as high as No. 4 in the ATP Rankings, handed Rafael Nadal his first loss at Roland Garros, sending shockwaves through the sports world.

Nadal was the No. 1 player in the ATP Rankings at the time, and he had won all 31 of his matches on the Parisian terre battue, and all 48 of his best-of-five-set clay-court matches. But Soderling paid the statistics no mind, crushing 61 winners en route to his four-set shocker.

Although the Swede's triumph resonated then, too, it is perhaps even more impressive today. After beating Belgian David Goffin Friday, Nadal has won 68 of his 69 matches at Roland Garros since that loss to Soderling. The 32-year-old has also added seven Coupe des Mousquetaires to his trophy cabinet, making 11 total at the clay-court Grand Slam.

The only other player to defeat Nadal at Roland Garros was Novak Djokovic in the 2015 quarter-finals. Soderling's career would be cut short due to an extended bout with mononucleosis — he last competed in 2011 — but nobody will soon forget the day he stunned Nadal where nobody had done so before.

ATPTour.com looks back at the day Soderling earned the biggest victory of his career:

World No. 25 Robin Soderling sent shockwaves through the tennis world on Sunday afternoon at Roland Garros as he put on a superb display to record the biggest victory of his career by sending four-time defending champion Rafael Nadal crashing out 6-2, 6-7(2), 6-4, 7-6(2) in the fourth round.

A packed Philippe Chatrier court watched on in disbelief as the Swede handed World No. 1 and reigning ATP World Tour champion Nadal his first defeat in 32 matches (31-1 record) at Roland Garros and his first-ever loss in a best-of-five-set clay-court match (48-1).

Since making his debut at Roland Garros in 2005, Nadal had lost just seven sets en route to winning four successive titles and was bidding to win an unprecedented fifth straight Coupe des Mousquetaires.

"This is not a tragedy, losing here in Paris. It had to happen one day, and this is an excellent season for me," said Nadal. "Of course it's a bit sad, but I have to overcome this as quickly as possible.

"Well, all of us athletes, we know that when we walk on the court we can either win or lose. I know it for a fact anything can happen, and I have to accept them both in the same way." 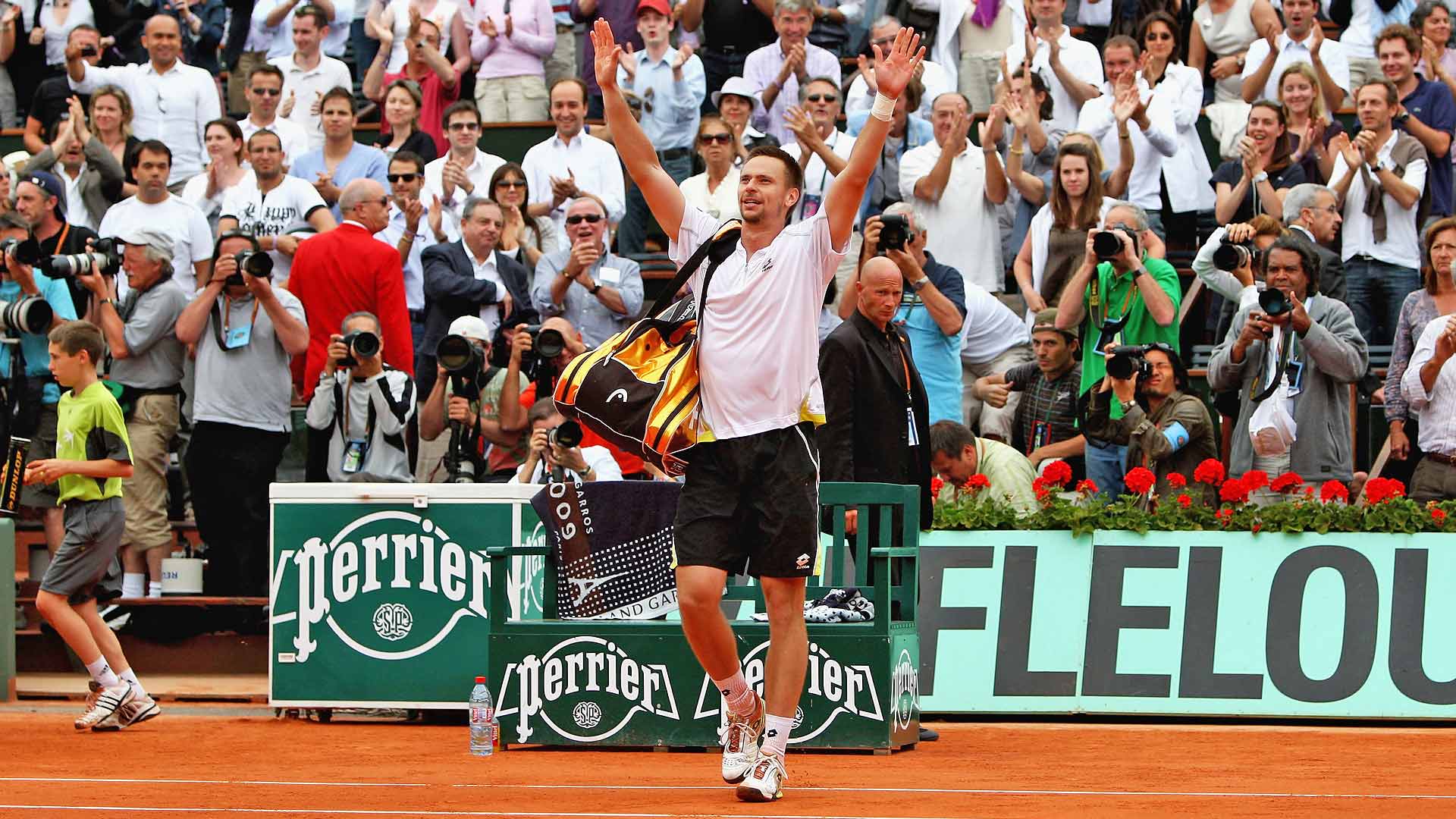 After a low key start to the tournament, Nadal looked to have found his stride in the tournament when he dismissed Lleyton Hewitt for the loss of just five games in the third round. However, in Sunday’s encounter the Spaniard failed to reproduce the blistering form that saw off former World No. 1 Hewitt and largely struggled to impose his game at all on Soderling – who in turn played a brave match and maintained a calm demeanour until the last ball.

Aggressive play from Soderling right from the beginning kept Nadal off balance and stationed well behind the baseline as he raced to retrieve the barrage of shots struck mostly off Soderling’s firing forehand. The Swede executed to perfection and was rewarded with two breaks of serve in the first set to take it 6-2. It was the first time since the 2007 final against Federer that Nadal had lost a set at Roland Garros, and it was the second-harshest score line he had endured after the 6-1 set he lost to Federer in the 2006 final.

Nadal recovered quickly from the loss of the set and restored order early in the second set by breaking to lead 2-1 as Soderling faltered at the net. However, when the Spaniard came to serve for the set at 5-4, a forehand error granted Soderling the chance to level and he duly converted with an exquisite backhand volley. Nadal was reprieved though as Soderling could not maintain his high level in the tie-break and Nadal’s consistency prevailed to level the match at one-set all.

Where fans may have expected Soderling to be disheartened by the loss of the second set, the Swede was quick to dispel his doubters by remaining unfazed and rediscovered his top form from the first two sets. With Nadal struggling to impose his game on Soderling, the Swede stepped up to dictate play and expose the chinks in Nadal’s armour.

You May Also Like: Soderling's Secrets To Beating Rafa

A rifling backhand into the corner earned Soderling two break points in the seventh game and he clinched a crucial break of serve with a strong backhand throwing Nadal off balance and forcing the error. Soderling, who had won just 11 matches in 2009 coming into Roland Garros, kept his composure when serving for the set at 5-4 and Nadal was powerless to defend against the big-hitting that clinched a two-sets-to-one lead for Soderling.

The 22-year-old Nadal looked set to mount the inevitable fight back at the start of the fourth set as he capitalised on a loose game from Soderling to break and lead 2-0. The Swede did not panic though and quickly regained the momentum by breaking back to love, sealing the game as an under-pressure Nadal hit a forehand long. With neither player able to make further impact on the other’s serve, the set went to a must-win tie-break for Nadal.

The Mallorcan, who was 6-1 lifetime in tie-break sets at Roland Garros prior to this match, still could not find his best tennis though and a stinging backhand pass – one of 61 winners he hit in the match - earned Soderling a mini-break lead at 3-1. An uncharacteristic error from Nadal handed Soderling the 4-1 advantage and he held both his service points to earn five match points at 6-1 – stunning the Philippe Chatrier court. Nadal’s fighting spirit saw him save the first with a forehand winner, but a forehand volley wide from the left-hander brought the crowd to their feet as he finally succumbed after three hours and 30 minutes.

"He didn't surprise me because I know how he plays, how dangerous he can be," said Nadal. "I didn't play my best tennis. No, I didn't attack in no one moment. I played very short, and I made it very easy for him to play at this level.

"I never was calm; that's the truth. The match started off very badly for me. Sometimes it's not enough fighting. You have to play a good level of tennis.

"Sometimes people think I win because I'm physically fit, but, no. When I win, it's because I play well, and that wasn't the case today. I must say that at key moments I couldn't take the opportunity because I was losing my calm, and I didn't play well."

The Manacor resident had looked virtually infallible in the lead up to Roland Garros, suffering just one loss on clay to Roger Federer in the final of the Mutua Madrilena Madrid Open the day after he had saved three match points and spent four hours and three minutes on court in a dramatic semi-final win over Novak Djokovic. He had successfully defended his titles at ATP World Tour Masters 1000 Monte-Carlo (d. Djokovic) and Barcelona (d. Ferrer) and regained the ATP World Tour Masters 1000 Rome title that he had won from 2005-7 with victory over Djokovic.

The left-hander had given himself the chance of winning the Grand Slam after winning his sixth Grand Slam championship at the Australian Open with back-to-back five-set victories over Fernando Verdasco and Roger Federer. He also added to his collection of 36 tour-level titles with victory at ATP World Tour Masters 1000 Indian Wells (d. Murray).

In contrast, Soderling came into Roland Garros with an 11-10 match record on the season, highlighted by a semi-final showing at Auckland (l. to del Potro) and a quarter-final exit at Brisbane (l. to Stepanek).

The Tibro native’s best previous Grand Slam performances were third-round showings at 2008 Roland Garros, 2007 Wimbledon, the 2005 US Open and 2003 Wimbledon. The last Swedish player to reach a Grand Slam final was Thomas Johansson at the 2002 Australian Open, when he defeated Marat Safin

Soderling, who reached a career-high No. 15 in the South African Airways ATP Rankings in February this year, improved to a 13-32 win-loss record against Top 10 players having now won four of his past eight such meetings.

Soderling goes on to face Russian No. 10 seed Nikolay Davydenko, who caused a slight upset as he ousted eighth-seeded Spaniard Fernando Verdasco 6-2, 6-2, 6-4. Davydenko, who reached the semi-finals at Roland Garros in 2005 (l. to Puerta) and 2007 (l. to Federer), committed just six unforced errors and hit 24 winners as he converted five of nine break points in the two-hour, 22-minute match.

The 27-year-old Davydenko, the only remaining Russian in the draw from the eight that started, has bounced back strongly from a left-heel injury that kept him sidelined for three months at the start of the season. Since returning, he has made semi-final showings at Barcelona (l. to Nadal) and Estoril (l. to Blake) and reached the quarter-finals at ATP World Tour Masters 1000 Monte-Carlo (l. to Murray).

World No. 8 Verdasco, who had not dropped a set en route to the fourth round, enjoyed a Grand Slam break through at the start of the season when he defeated World No. 4 Andy Murray and No. 7 Jo-Wilfried Tsonga en route to the Australian Open semi-finals – where he lost to eventual champion Nadal in an epic five-set match. It is the first time this season that the 25 year old has not reached at least the quarter-finals in a tournament.