Michael Stich, the former World No. 2 and 1991 Wimbledon champion, is being inducted into the International Tennis Hall of Fame on Saturday.

Andrew Eichenholz
This article contains:
German speaks to ATPWorldTour.com about his tennis journey

German Michael Stich was walking through the International Tennis Hall of Fame in Newport, Rhode Island on Friday for the first time, wearing a constant smile across his face. On Saturday, he will become an inductee, joining an elite group made up of the greatest players in tennis history.

As he toured the museum with family and friends, the former World No. 2 came across a young boy, who was also looking through all of the historical artifacts. The boy was playing a trivia game, and didn’t know the answer to the question he was asked.

“Never give up,” Stich told him.

That’s something that the 18-time tour-level titlist never did. When the German was that boy’s age, he never dreamt of making it this far. In fact, Stich’s first sport was football, not tennis, which he began playing at the age of six. Gaining induction into the International Tennis Hall of Fame never appeared in his wildest dreams. But he worked hard to build a successful career that spanned nearly a decade. 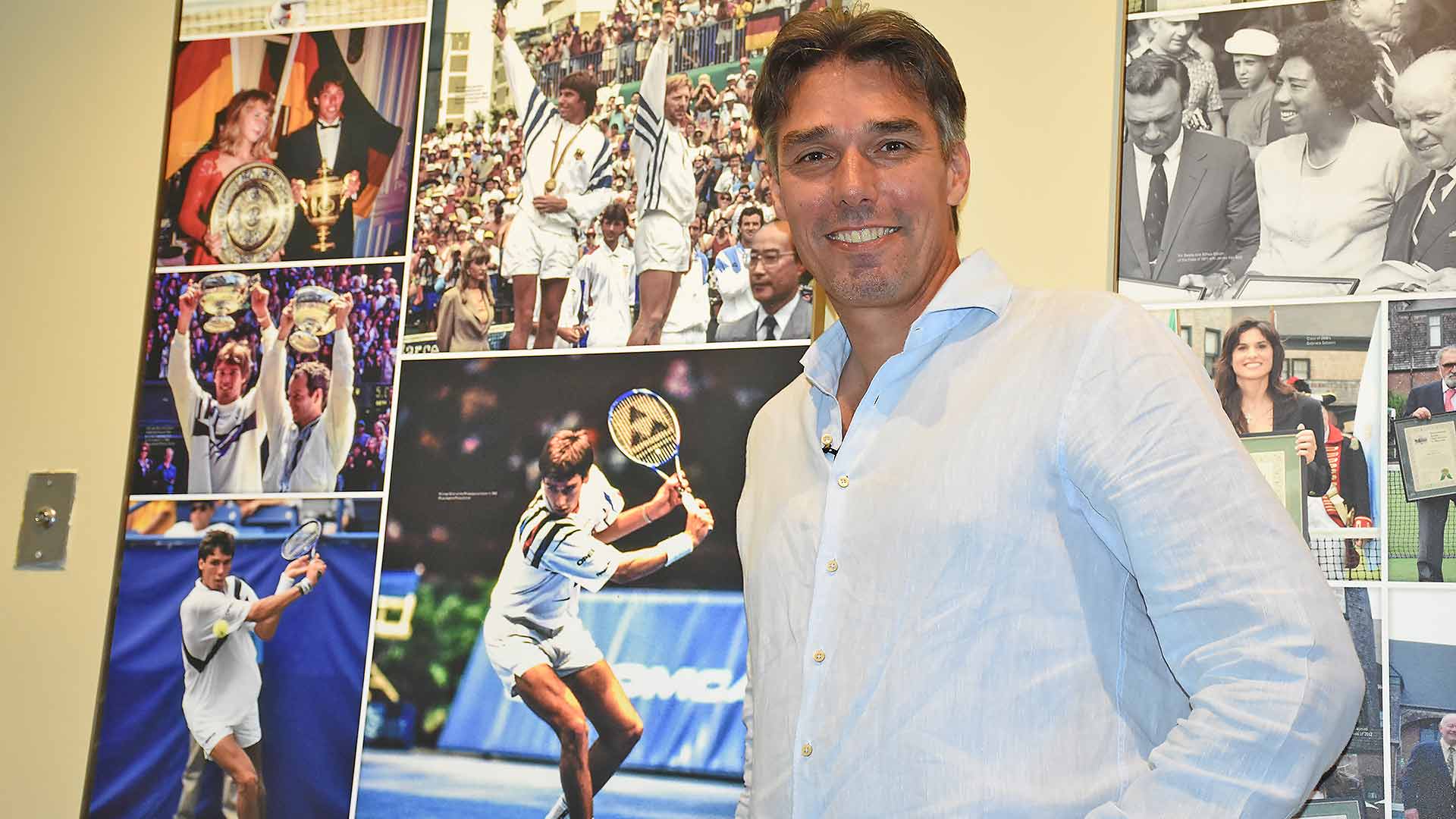 “I never thought about it. I think when I started playing and understanding that I could become a good player and when I turned professional, then I had a list in my head of what I wanted to achieve,” Stich told ATPWorldTour.com. “But to be here, and to have that as a goal, really was never something I could have imagined.”

Stich wanted to play well in Germany, lift a Grand Slam trophy in singles and doubles, and help Germany triumph in the Davis Cup. Mission accomplished.

The German famously ousted top seed Stefan Edberg in the 1991 semi-finals at The Championships without breaking serve, and then defeated his compatriot, second-seeded Boris Becker, to claim victory at Wimbledon. He’d go on to win the doubles title at SW19 the following year with John McEnroe, and aid Germany to Davis Cup glory in 1993. Stich also owns an Olympic gold medal, and plenty more.

The museum has a showcase with loans from Stich and fellow Class of 2018 inductee Helena Sukova, featuring the German’s 1991 Wimbledon singles trophy, his 1992 Olympic Men’s Doubles gold medal, the Deutsche Bundesverdienstkreuz — Germany’s highest honor for service to the nation — and more. So what was it like to see some of his most valuable possessions on display alongside some of the most notable artifacts in tennis history?

“The first thing I thought when I saw it was like, ‘Damn, I’m missing some more Grand Slam trophies. Should have been some more’,” Stich joked. “But when you walk by and you see John [McEnroe] donating a trophy from the Wimbledon doubles, if I would have had five [trophies], I would donate one as well. I just have one.” 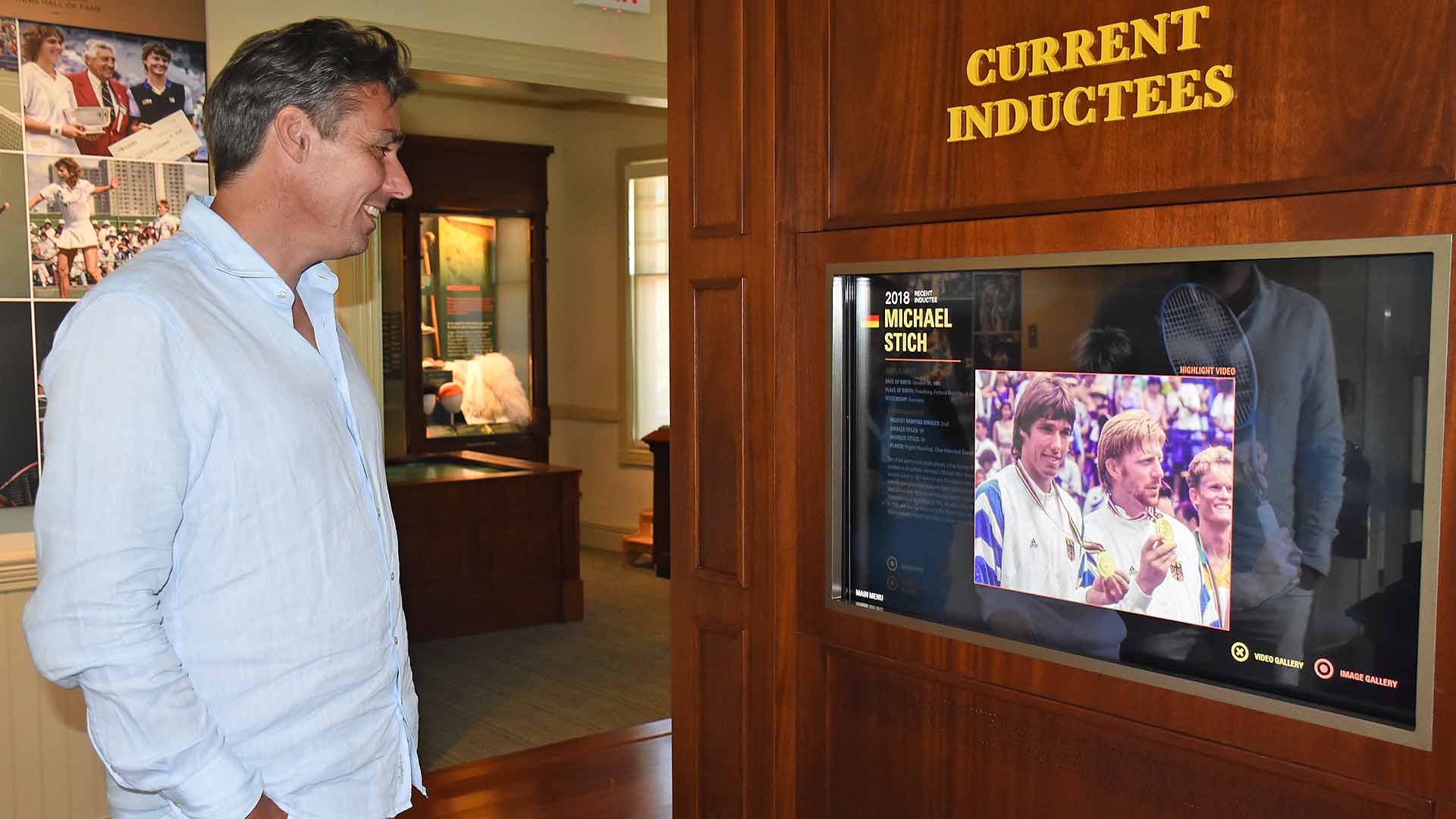 That makes this moment even more special for Stich.

In a way, there was an air of uncertainty about the trip. Stich had never been to Newport. But when he got a call from International Tennis Hall of Fame Chief Executive Officer Todd Martin notifying him of his induction, the excitement began to build.

“I thought of it as a little bit of an adventure trip,” Stich said. “I didn’t know what to expect because I don’t know the place. That’s why it’s so great to come here, and also the atmosphere in Newport in general when you just walk through the streets, it has a lot of similarity for me with Wimbledon with the tradition and with the feeling and with the sense of the history and the tradition. There are very few places in the world that have that and preserve that and that’s great.”

The first room visitors see in the museum is the Woolard Family Enshrinement Gallery. And Stich’s plaque calls him, ‘one of the sport’s most stylish players, a free-flowing shot-maker who excelled on all surfaces’. 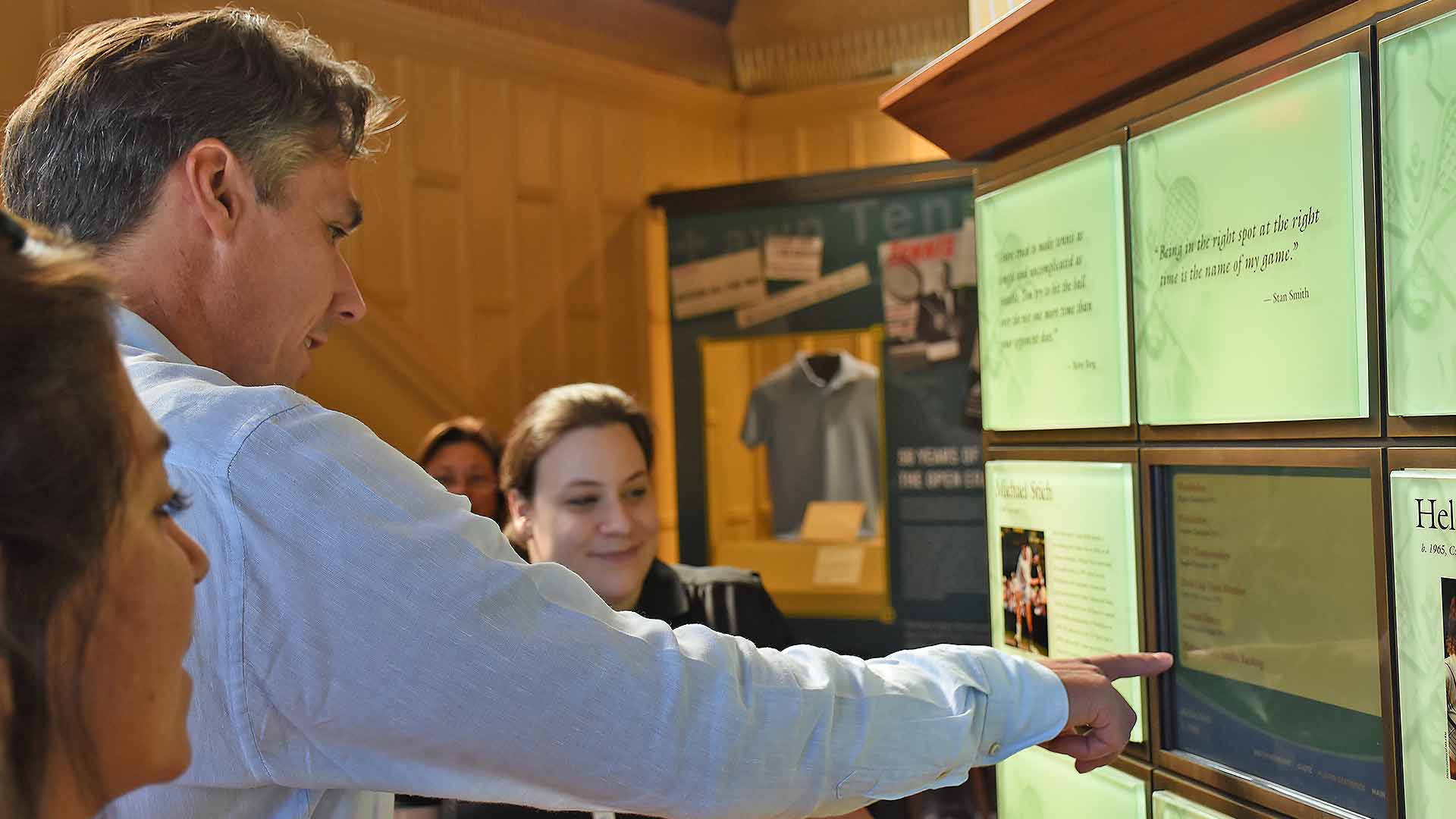 “I realised when I looked at my pictures on that wall in the room that we have, that they only showed my backhand, so maybe they’ll just remember my backhand,” Stich joked. “For me, that’s actually not so important. I think what’s important for me is when people come up to me and say I enjoyed watching you play tennis in general, the way I played tennis, maybe the style, maybe playing quite fluently.”

Of course, Stich is happy to have won the titles he did and accomplish many of his goals. But in the end, he’s not as concerned about the mementos. Instead, he wants people to remember enjoying him play.