Michael Stich celebrates his induction into the International Tennis Hall of Fame on Saturday in Newport, Rhode Island.

Perhaps Michael Stich’s crowning achievement in tennis came in 1991 at Wimbledon. The German faced top-seeded Stefan Edberg in the semi-finals and did not break serve, but pulled through to reach his first Grand Slam final. There, he would defeat compatriot Boris Becker, the second seed, to triumph at The Championships.

That evening at the traditional champions’ dinner, the son of 1924 and 1926 Wimbledon titlist Jean Borotra asked Stich if he could introduce him to his father.

“Jean Borotra got up and looked at me and said, ‘Who are you’?”

Twenty-seven years later, Stich can say he is an inductee in the International Tennis Hall of Fame.

“I was not mad at him. It was okay,” Stich told the crowd in Newport, Rhode Island on Saturday. “But it’s just those special moments, occasions that I remember more than match results or scores I have achieved… It’s not so much about obviously the special result or a special score that I’ve achieved, it’s about the overall view on this sport.” 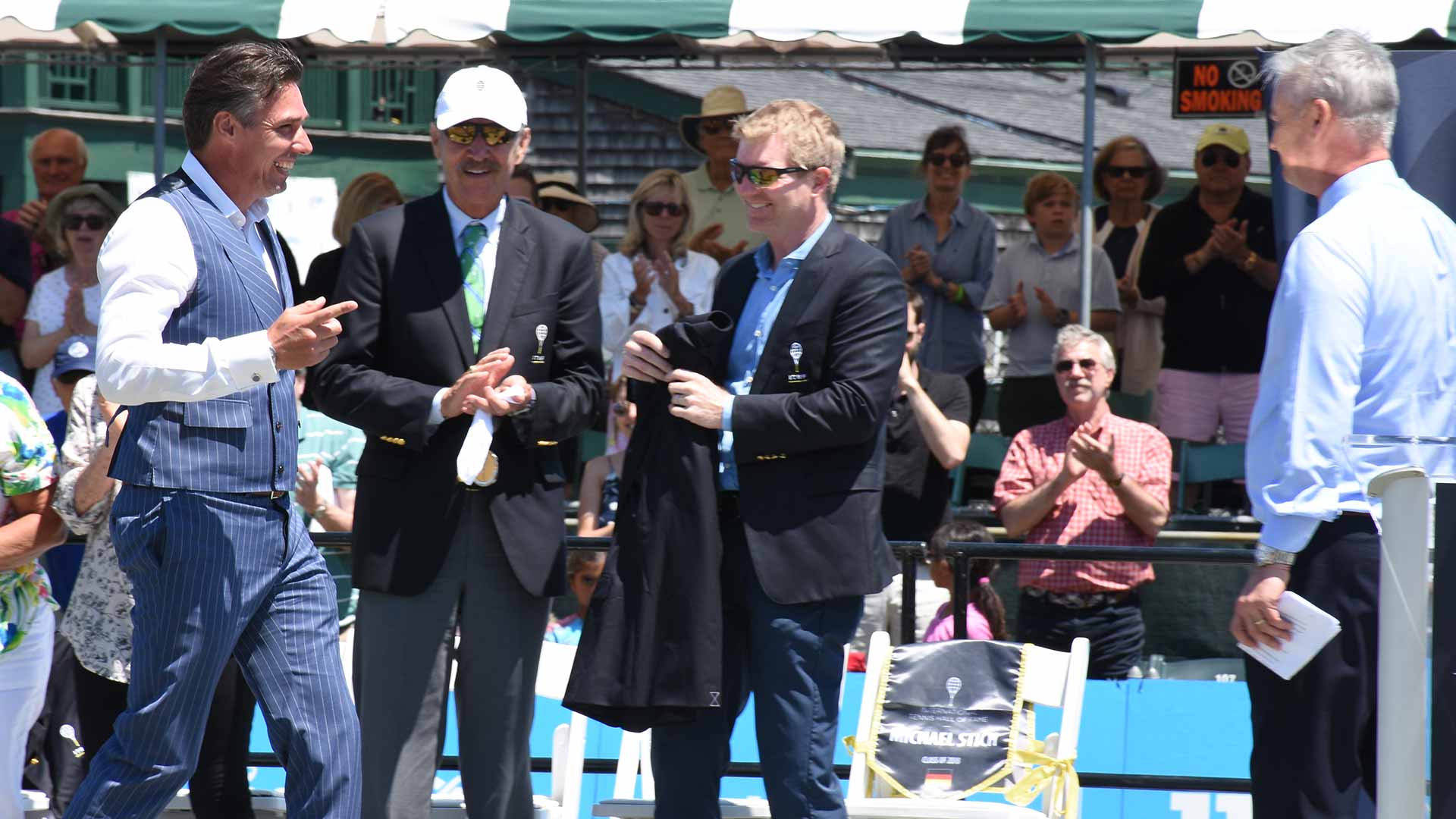 Mark Lewis, Stich’s coach of six years, introduced his charge on a perfectly sunny day. And while he didn’t discuss that particular moment, he vividly remembered what the German said earlier in the day, right before taking to Centre Court at SW19 for his championship match against Becker.

“He had this steely look in his eyes, and he said, ‘There’s no way I’m going to lose this match’,” Lewis said. “Of course, he didn’t. Michael is a man true to his word.”

You May Also Like: Stich Never Dreamt Of Newport Induction, But Etches Name In Tennis History

But for a moment, after Lewis called Stich to the stage on Bill Talbert Stadium Court, the German was at a loss for words, appearing to hold back tears as he stood over the lectern.

“I was asked to hand in the paper with the written speech, everybody was getting nervous. I said, ‘I don’t have a paper’,” Stich later said. “That’s just what happens, I’ll improvise, best time I had on court as well. I wanted to suck in all the atmosphere and the experience I have coming here. It’s been a lot.” 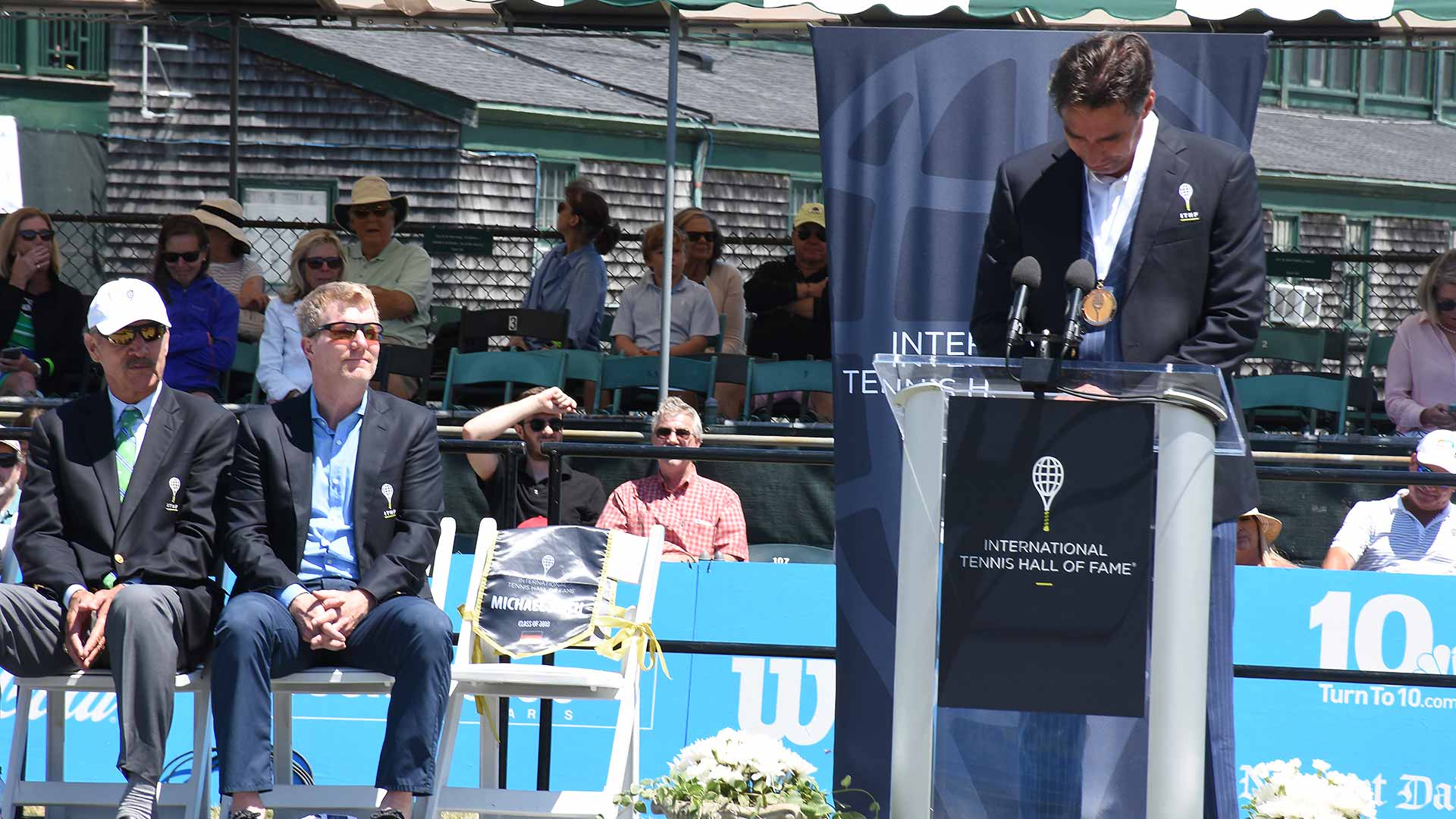 Stich is simply a man who loves tennis. He retired following a five-set loss in the 1997 Wimbledon semi-finals, and would not touch a racquet for five years after that in order to see what else the world had to offer. But that doesn’t mean he didn’t miss the game.

“The thing I missed most were the players, the guys that I used to travel around with the whole year,” Stich said. “There are ones I didn't like obviously as well. But I missed those guys. I missed having them around, being part of that group of players that make that sport so great. That's why I'm so thankful to be inducted this year and having the opportunity to be part of this again in a different way, but in a very special way, also with all the different generations that are part of the Hall of Fame.”

Stich competed against some of the best players in the history of the sport. Notably, he held a 5-4 FedEx ATP Head2Head series lead against 64-time tour-level titlist Pete Sampras, and a 7-5 advantage against former World No. 1 Jim Courier, who sat just feet behind the German as he spoke on Saturday afternoon.

How was he able to find such success? As Stich said, in many cases, going with the flow and improvising during a match helped him stay relaxed and keep the game simple.

“I thought Michael could win every match he played, but I guess there was the odd occasion when he knew I was a little worried that he may lose to a lesser-ranked player. I don’t know how he knew, but he did,” Lewis said. “When he detected that in me, he’d say something like, ‘Don’t worry, coach, it’s not that complicated. Just a big kick serve to the backhand, easy volley, game over’. That’s just what he would do, and he’d win.” 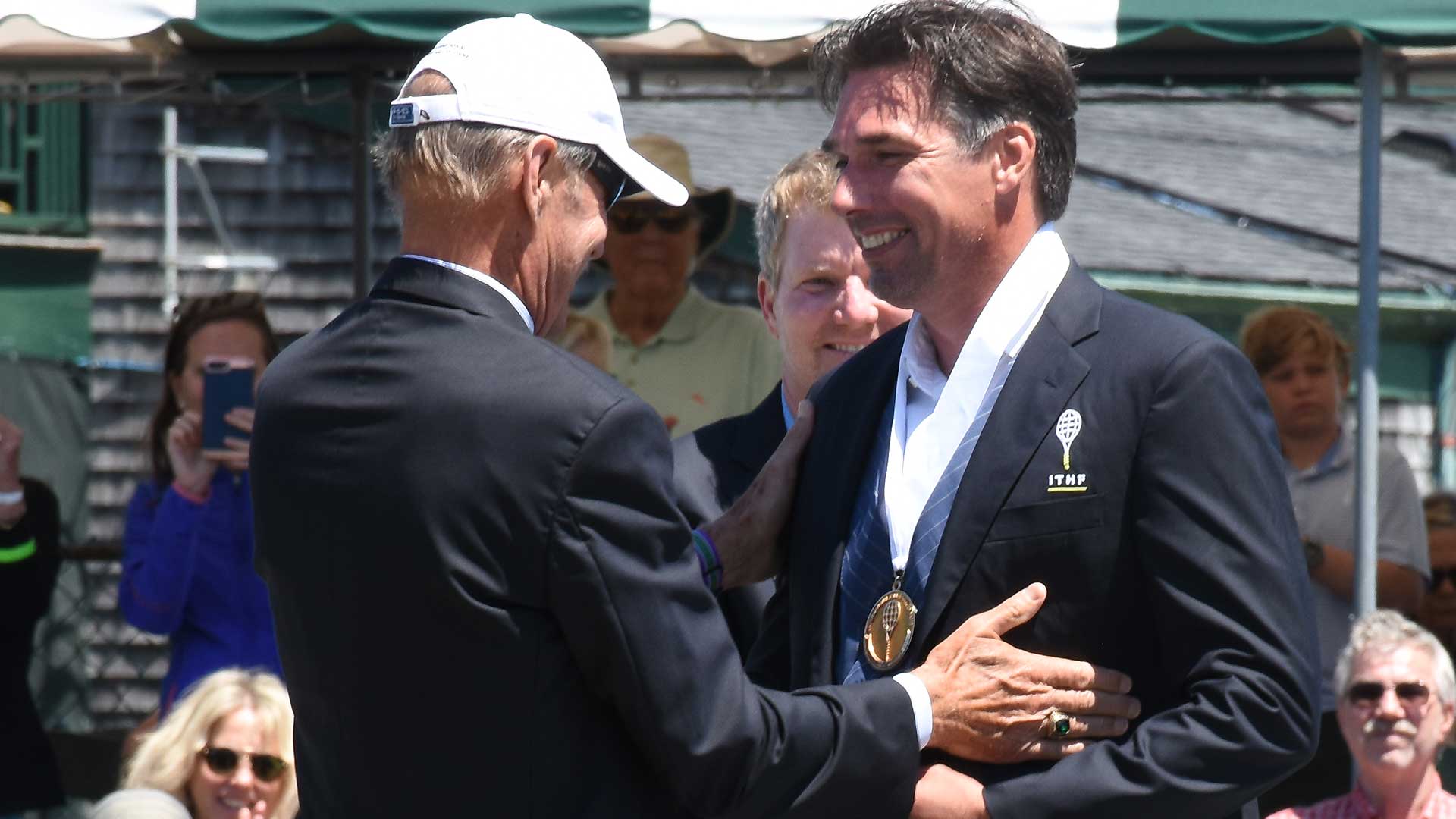 Over the course of his nearly decade-long career, Stich finished six consecutive seasons inside the Top 20 of the ATP Rankings, tallied 385 match wins and lifted 18 tour-level titles, including two campaigns during which he triumphed on four different surfaces (1991, 1993).

That’s not a bad haul of accomplishments for a boy who began playing tennis by hitting against a wall at the age of six — which he maintains was his toughest opponent — because he had no choice but to go to the tennis club as his two older brothers went to play the game.

Now, he is a member of an elite group made up of the legends of the sport. And Stich understands that with that distinction comes responsibility.

“I think this sport will be great over the next decades to come,” Stich said. “I promise I’ll do my best to be part of this and to help this and make this happen.”