Children in Cambodia celebrate playing tennis in wheelchairs that were donated to them by Stop War Start Tennis with funds made possible by an ATP ACES For Charity grant.

Stop War Start Tennis, a 2018 ATP ACES For Charity grant recipient, is on a mission to spotlight existing projects around the world through official visits, while assessing the needs of local partners and also verifying that donations are being used transparently

Ten-year-old Teck Toy should have been in school instead of foraging through the forest. But when hunger is extreme and your family is in danger of dying due to starvation, education takes a backseat. In remote villages of northwest Cambodia, hunger is staved off by boiling brackish water and making soup. Snakes, frogs, rats, lizards and anything else caught that can provide a bit of protein gets tossed into the pot and flavoured with forest plants and starchy roots. Toy reached down into the dense forest undergrowth full of vines to pick up what he thought to be a wild mushroom. Instead, he picked up a ‘bomblet’, a small-sized fragmentation bomb that is packed with hundreds of others into a larger cluster bomb, which is then dropped from the air or launched from the ground.

In a flash, Toy lost his left leg and joined Cambodia’s vast legion of amputees due to unexploded ordinance from decades-old fighting. Today, thanks to a Catholic mission established in the Battambang prefecture by a Spanish priest and his devoted volunteers, the 10-year-old no longer goes hungry or misses school. And he spends his free time not in the forest, but on a new tennis court playing wheelchair tennis with other amputees.

In February, I visited Cambodia on behalf of Stop War Start Tennis, the foundation that Aisam-Ul-Haq Qureshi founded to promote peace through tennis and to help communities ravaged by war to rebuild through our great sport. The foundation received a grant through the ATP ACES For Charity programme this year, as it did in 2013. 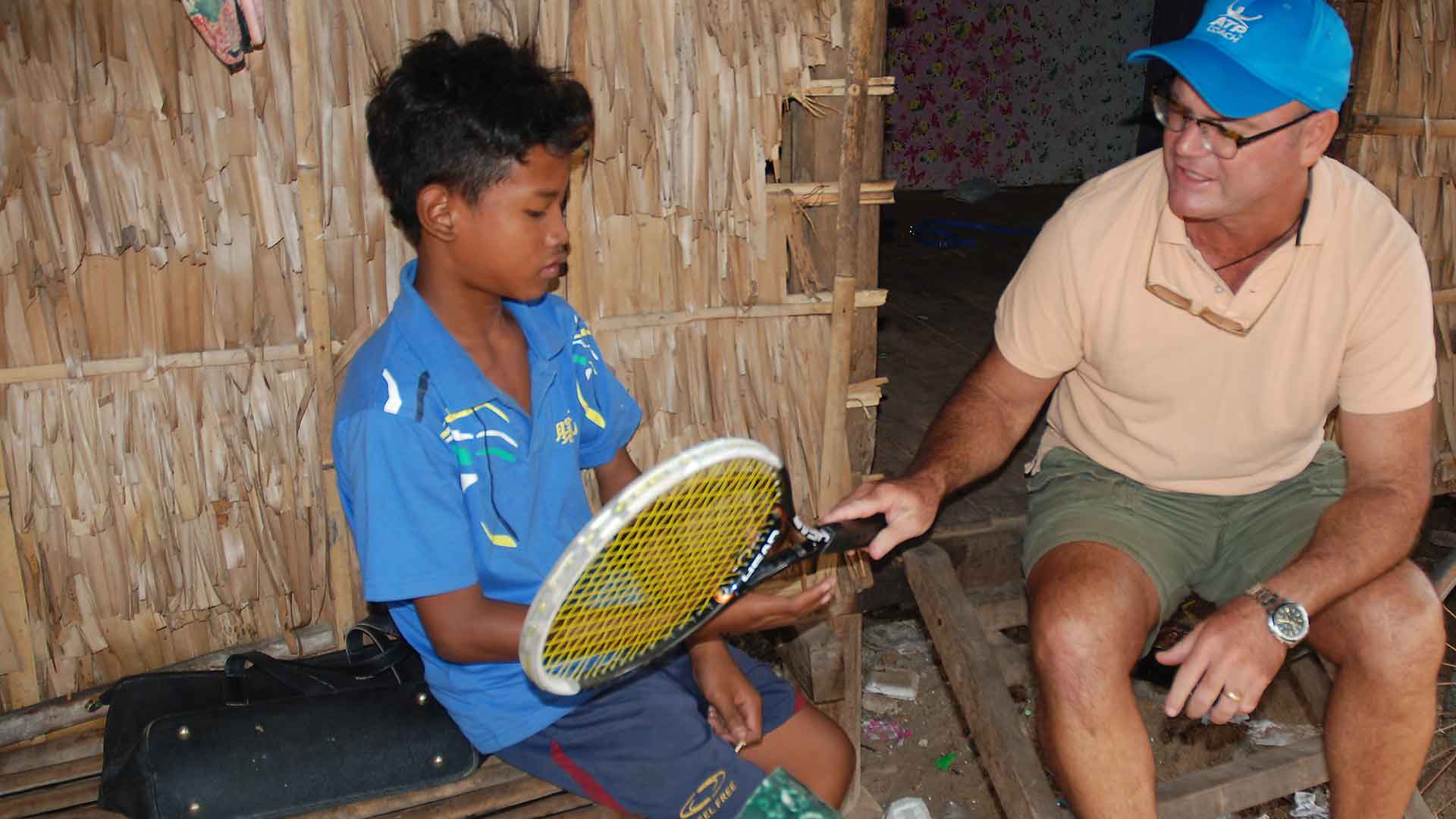 The funds are meant to help kids like Lisa Sokor, who wants to be a tennis star. The 11-year-old comes from the province of Siem Reap, home of the temples of Angkor Wat, which are considered one of the wonders of the world. Sokor grew up slightly more than a stone’s throw away from those magnificent Khmer structures in another village lying in ruins, Derc Sun Cang T’boung, quite possibly one of the poorest squatter villages in all of Cambodia. In Sokor’s village, homes are built on top of black slime mud; a sewage mix of gray water and black water spit out of thatched-palm huts through PVC pipes into a rain-soaked ground. Among the stench and filth, naked children run amok through a melting pot of malaria, cholera and dysentery.

It was Scott Windus who discovered a then seven-year-old Lisa Sokor. Windus is a former Tennis Australia Senior Club Coach, who has been introducing tennis to disadvantaged kids in Cambodia’s northwest territory for five years. Project Empower, which Windus spearheads, is funded by Australia’s Baptist Mission Agency.

“Lisa caught hold of the tail end of tennis, knowing that it would be her ticket out of this situation and to a bigger, brighter future,” said Windus. “At the age of 11, Lisa inspires all of us on a daily basis, as we are in awe of her self-motivated, never-say-die training and match attitude.”

Windus sets up shop and recruits players from the poorest villages in Siem Reap. For him, the challenges in Cambodia are not just providing opportunities for the poor, but also eradicating hatred and racial prejudices. Windus’ success stories range from a tuk-tuk driver turned tennis coach, to a half-dozen boys who have made it to the top of the national rankings. But his most impressive victory is a bit more subtle.

“The civil war of the 1980s dragged on in the northwestern region of the country for 19 years after hostilities stopped in the capital, Phnom Penh, in some areas not ceasing until as late as 1999,” stated Windus. “One of the enduring consequences is the tension that still exists between the Khmer national and the local Khmer/Vietnamese citizens, fathered by Vietnamese soldiers during the Vietnamese occupation.

“One success story is the village of Da Pol in Siem Reap City, home to a large number of the Khmer/Vietnamese families. Through the sport of tennis, the village is experiencing a unity like never before. 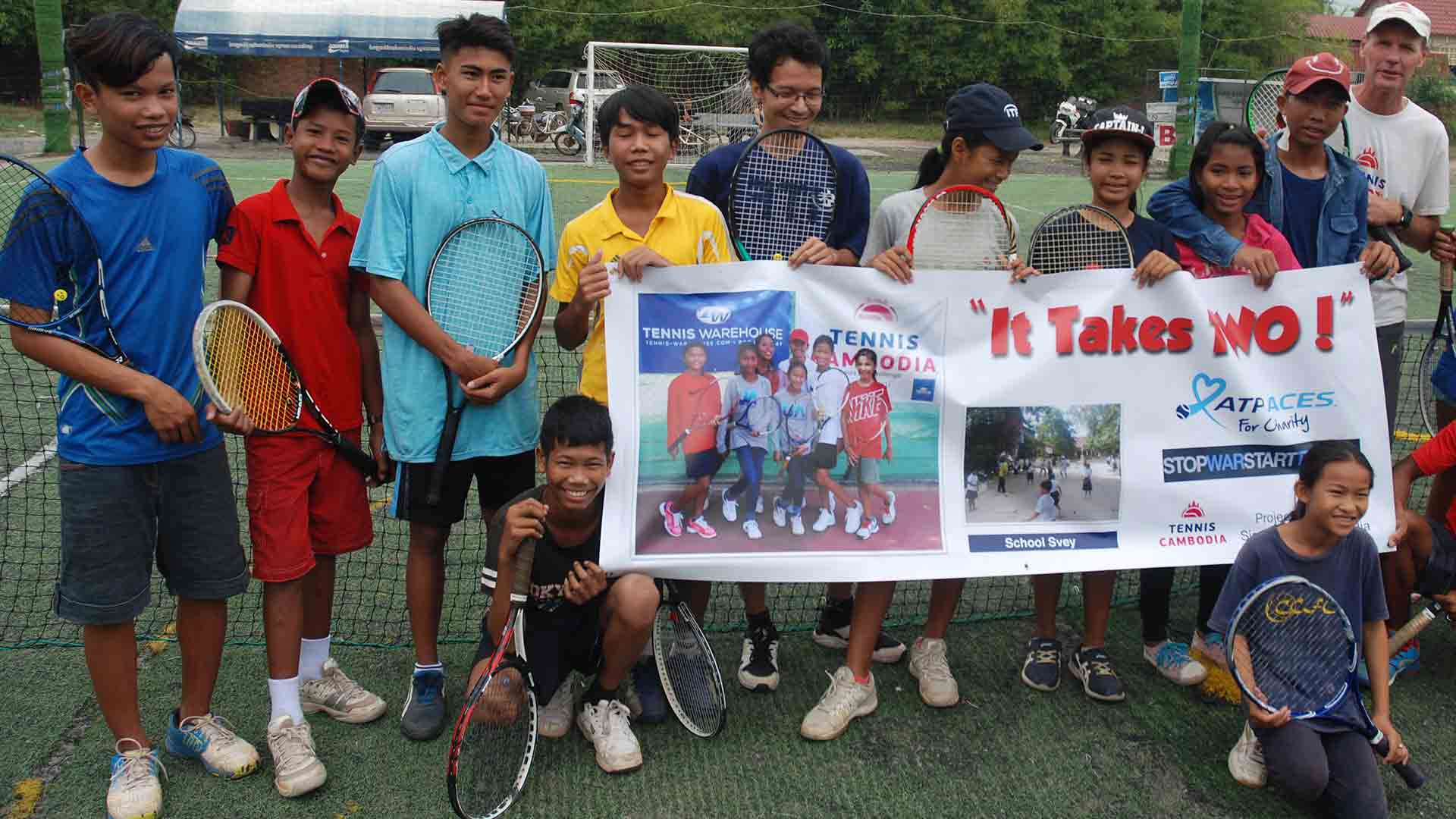 “Getting permission to use makeshift nets on the local Vietnamese dirt volleyball court, we were able to host a large number of Khmer and Vietnamese youth coming each week to learn tennis. Tennis gave them a chance to run around together and have fun, while forgetting about their existing prejudice towards the other. As these players grow in their tennis abilities, gain new experiences through travelling and meeting people from all over the world, their character and attitudes also mature to encompass expanded horizons and a vision of a world that is much bigger than the one they come from.”

In November 2017, some of Windus' students joined Tennis Cambodia’s national junior team for a trip to Vietnam.

“Interaction through tennis helps people form a more encompassing worldview and it also has the power to break down generational fears and prejudice across racial lines,” said Windus. “For the first time, they were able to witness the truth about their Vietnamese hosts being friendly, welcoming and encouraging. On the other side of this new experience and having met, played with and shared a meal with many of the Vietnamese team players and officials, the Cambodian children now have tools and a voice with which to challenge the status-quo within their communities and schools that want to continue the feud with their close neighbours.”

By the national road, it takes less than three hours to reach the city of Battambang from Siem Reap. While Siem Reap is on the map for its rich world heritage sites, Battambang has been a flaming arrow on the map for another reason — warfare. Invaders, rebels, bandits and deserting soldiers have all struck camp in and around Battambang. Even the name, Battambang sounds like it’s about to explode. The effects of anti-tank mines, cluster bombs and cheap homemade land mines are visible everywhere you go. Every year, just like clockwork, as the rainy season washes away thin layers of laterite soil thus bringing hidden explosives a little bit closer to the surface, a new batch of amputees appear on the scene.

Father Enrique Figueroda first came to Cambodia in the mid 1980s and was immediately struck by the amount of agony and misery he saw everywhere. Later, he was drawn to Battambang by the stories of how a small band of local Christians defied the Khmer Rouge genocidal mandate forbidding Christianity. It was here in Battambang that the soft-hearted father saw the maimed and disabled suffering while literally crying out for help. Soon, Figueroda became known as the wheelchair priest. Today, at his Arrupe Center, which is dedicated to helping teach and train locals, tennis wheelchairs are scattered about a cement slab that has a net strung across. Tennis is just one of the wheelchair activities that they sponsor. The Arrupe Center is staffed by young Spanish volunteers and local adults. Most of the Spanish staff live about 25 kilometres away in the village of Ta Hen at the sister school commune. The expression, “off the beaten track”, could have been talking about Ta Hen, but that is where the land was granted and a school and agriculture center were built. And it is also the least likely place that you will ever see two brand new lighted tennis courts constructed, complete with a practice wall — a gift from tennis-loving Spanish donors. 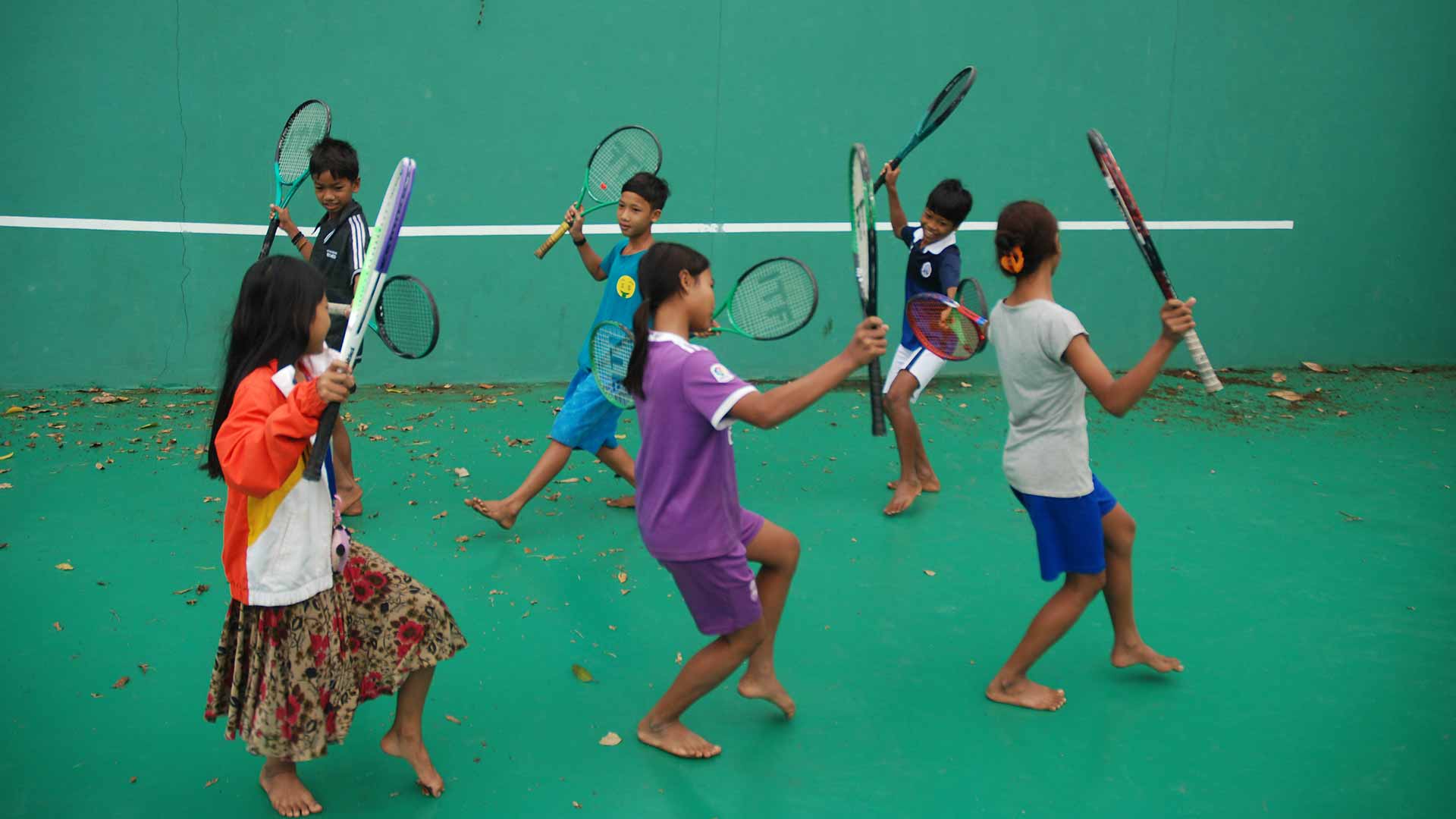 On the day I visited Ta Hen, both disabled and disadvantaged kids, many from parents who gifted them to the church because they were too poor to care for them, were trying to play tennis. I say trying, because there were not enough racquets and balls available for everyone to use at once. None of the kids had tennis shoes. I suppose that quite a few would rather have prosthetic legs first. Through previous Stop War Start Tennis visits in hard hit areas around the world, Aisam-Ul-Haq Qureshi and I have seen similar scenes. But here was something different. I looked around the tennis courts at kids as poor as church mice — some were missing limbs, others had birth defects, a few were stricken with incurable diseases and one child had never grown. There they all were running, limping, rolling and hobbling all over the place, as a constant roar of laughter seemed to shake the very hard-court surface.

"I am so happy to support and recommend these two projects in Siem Reap and Battambang," Qureshi told me. "What they have done for these children with so little is a testament to the dedication to improving lives through tennis. On the ATP World Tour, we have the best of everything. We often don't realise the value of used balls, racquets and shoes. Equipment we tend to discard could be used to bring joy to those less fortunate."

Later, I was allowed to visit the dorm rooms where kids slept three or four to a bed, watch other children tending to their assigned plots in the garden, and see others completing their daily tasks. Everywhere I went kids were smiling, singing, laughing and those that could; skipping and dancing around the commune. Then it dawned on me why these kids, who had every reason to be angry, sad or bitter seemed so happy. Here in a remote village — where remote takes on a new meaning — surrounded by rice paddies and corn fields, coconut palms and banana trees, lies a little haven where kids that nobody wants feel loved no matter what condition, shape or size they come in. During my visit, I quit counting the amount of times that I observed the Spanish volunteers hugging, holding hands or carrying these little children. Maybe that is why they are all volunteers — you cannot pay people to love in those unfortunate conditions. Over two days, I got to know a few of the volunteers: Ivan, Martia, Juan and Borja. Though they are not trained professional tennis coaches, there is nothing these young people would not do to encourage the kids to play tennis.

Afterwards, Qureshi asked me what I learned from this visit that we might share with other people who are considering creating similar projects around the world.

I could think of no easy answer. What I observed with Windus in Siem Reap and Figueroda’s team in Battambang — to whom Qureshi donated five wheelchairs last year — is just how amazing the amount of joy and hope that tennis can make in the lives of those who are afflicted in one way or the other. Against some pretty incredible odds, these two men and their teams have succeeded where lesser-determined people would have given up long ago.

If interested in communicating or supporting either project in Siem Reap or Battambang, Cambodia, please contact Robert Davis at [email protected] for further details.