Dominic Thiem has fallen short against Rafael Nadal in two Roland Garros finals and on Sunday he lost to Novak Djokovic in five sets with the Australian Open trophy at stake. The Austrian is still pursuing Grand Slam glory, but there’s certainly no shame in whom he’s lost to.

“These guys brought tennis to a complete new level. They also brought me probably to a much better level,” Thiem said. “It was easier for sure in a different era to win big titles, that's 100 per cent. But I'm happy I can compete with these guys on the best level. I really also hope that I win my maiden Slam when they're still around, because it just counts more.”

Thiem has been getting closer. At 2018 Roland Garros, Thiem didn’t win a set against Nadal. Last year in Paris, the Spaniard beat him in four. And in Melbourne, Thiem was up two sets to one before ultimately succumbing to Djokovic.

You May Also Like: Djokovic Wins Eighth Australian Open Crown, Returns To No. 1

Nobody has won more Grand Slam titles without a championship loss than Nadal at Roland Garros (12-0), and eight-time champion Djokovic has never lost after reaching the semi-finals at the Australian Open (16-0). If winning a major isn’t difficult enough, those are the sky-high hurdles Thiem has faced to take that last step.

“It's unique in sports history that the three best players by far are playing in the same era. That's what makes it very, very difficult for other players to break through,” Thiem said of the Big Three, which also includes 20-time Slam winner Roger Federer. “As a different player than them, you have to beat at least two of them to win a big title. Almost all players [have] failed to do that. That's what makes it so tough.”

It’s not that Thiem’s level is not high enough to beat the Big Three. In fact, the Austrian had won four of his previous five ATP Head2Head meetings against Djokovic entering Sunday's clash, and he defeated Nadal in the quarter-finals. Thiem has the firepower to beat anyone on the ATP Tour on any day.

But defeating those legends in a best-of-five sets final is a different beast. Then you throw in potentially having to beat more than one member of the Big Three to lift a Grand Slam trophy. It’s like spending several hours and giving everything you have to defeat one superhero, only for another one to come flying in.

Thiem was trying to become just the second player (Wawrinka, 2014 Australian Open) to beat Djokovic and Nadal at the same major.

“In the last two sets, I definitely gave everything I had. Novak is part of three guys who are by far the best players ever who played tennis. If you play a Grand Slam final against him, it's always going to be a match where very small details are deciding [it],” Thiem said. “Maybe I could have converted the break point in the fourth set where I could have the 2-1 lead… Of course, there were some small mistakes here and there, but they're happening. At the end it was a super close five-setter. I don't really regret anything.”

Djokovic serve and volleyed only eight times in his first six matches of the tournament. Yet facing break point at 1-1 in the fourth set, the Serbian did just that, hitting two crisp backhand volleys to snuff out Thiem’s opportunity. If the Austrian found a way to pass the 17-time Slam champion with his forehand off Djokovic’s initial volley, perhaps he’d be the first player to win his maiden major since Marin Cilic at the 2014 US Open.

But that’s what makes beating the Big Three in such huge matches so difficult. You can play sensational tennis for hours, but one missed opportunity is all it takes for them to capitalise.

“In the past two [major] finals — [at the] US Open and here — it was really close. It could have gone either way for Daniil in the US Open and for me here,” Thiem said, referencing Daniil Medvedev’s five-set loss against Nadal in Flushing Meadows last September. “It takes nothing more than just a little bit luck, little details there." 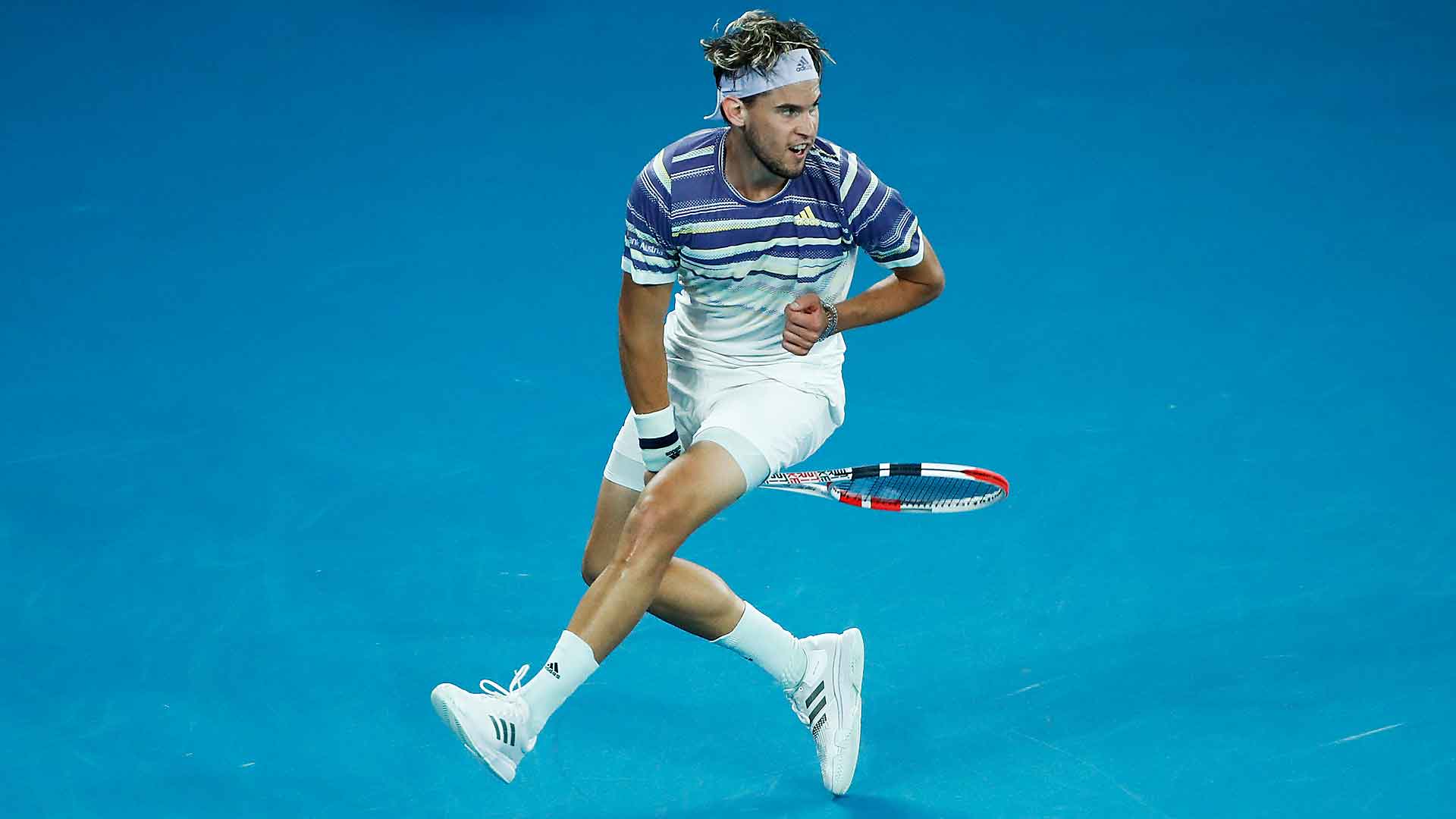 The Austrian also knows that even though he was unable to get across the finish line on Sunday, it took a tremendous effort to put himself one set away from the title in the first place. In the second round, he rallied from two sets to one down against Alex Bolt before finding his form to beat three Top 10 players: No. 10 Gael Monfils, top seed Nadal and 2018 Nitto ATP Finals champion Alexander Zverev.

“[I am happy with] the way I kept my level, the way I kept my tension over all the two weeks. I didn't have easy matches, especially from the quarters on,” Thiem said. “I'm very aware and sure now that I can play on a very high level for a full Grand Slam. Didn't have any drops. That doesn't make me proud, but it makes me very confident for the next big tournaments which are coming up.”

Even though Thiem is disappointed, saying, “I just feel a lot of emptiness right now”, the Austrian was able to put his defeat in perspective.

“I'd also like to say that I think we all saw before the tournament, also during, that what we are doing is by far, there are way more important things in life,” Thiem said on court after his loss. “It's very tough what this beautiful country has been through, is still going through so I think that the Australian Open [was] a great distraction. But I still hope that Australia — it's so beautiful, so amazing — all the people who were affected, the wildlife, the animals who were affected, that they are recovering very soon and that a disaster like this is never happening again.”