Deigo Schwartzman, the No. 13 seed, battles hard against third seed and two-time finalist Dominic Thiem at Roland Garros on Tuesday.

Argentine to play Nadal or Sinner in semi-finals

Diego Schwartzman recorded one of the biggest wins of his career on Tuesday in an energy-sapping five-hour, eight-minute victory for a place in the Roland Garros semi-finals.

Schwartzman, appearing in his fourth major championship quarter-final, recovered from 2-4 down in the first set and 1-3 down in the second set. He had the match on his racquet, but crucially missed a forehand on top of the net with his Austrian opponent serving at 4-5, 15/30 in the second set. Thiem dug deep to save one set point at 4-5 in the third set and three set points at 4-5 in the fourth set, which Schwartzman found a way to win to force a decider.

In the second set [and] the third set, I had a lot of opportunities, also easy opportunities," said Schwartzman. "That's why I was really upset, really angry with myself at the time in the second and in the third, when I was close to winning those sets. It was a tough situation, because in the fourth, he started playing so well. I did come back, serving 5-4, 40/0. He played three unreal points, amazing points, because he's one of the best and he can do it. At that time I was thinking, 'Okay, c'mon, today it's not going to happen."

Schwartzman physically worked his way to his 20th victory of the year (20-9 record), wearing down Thiem, who had chased down drop shots against French wild card Hugo Gaston in a five-hour fourth-round marathon. Schwartzman hit 46 winners, while Thiem could only convert nine of his 22 break point chances and committed 81 unforced errors. 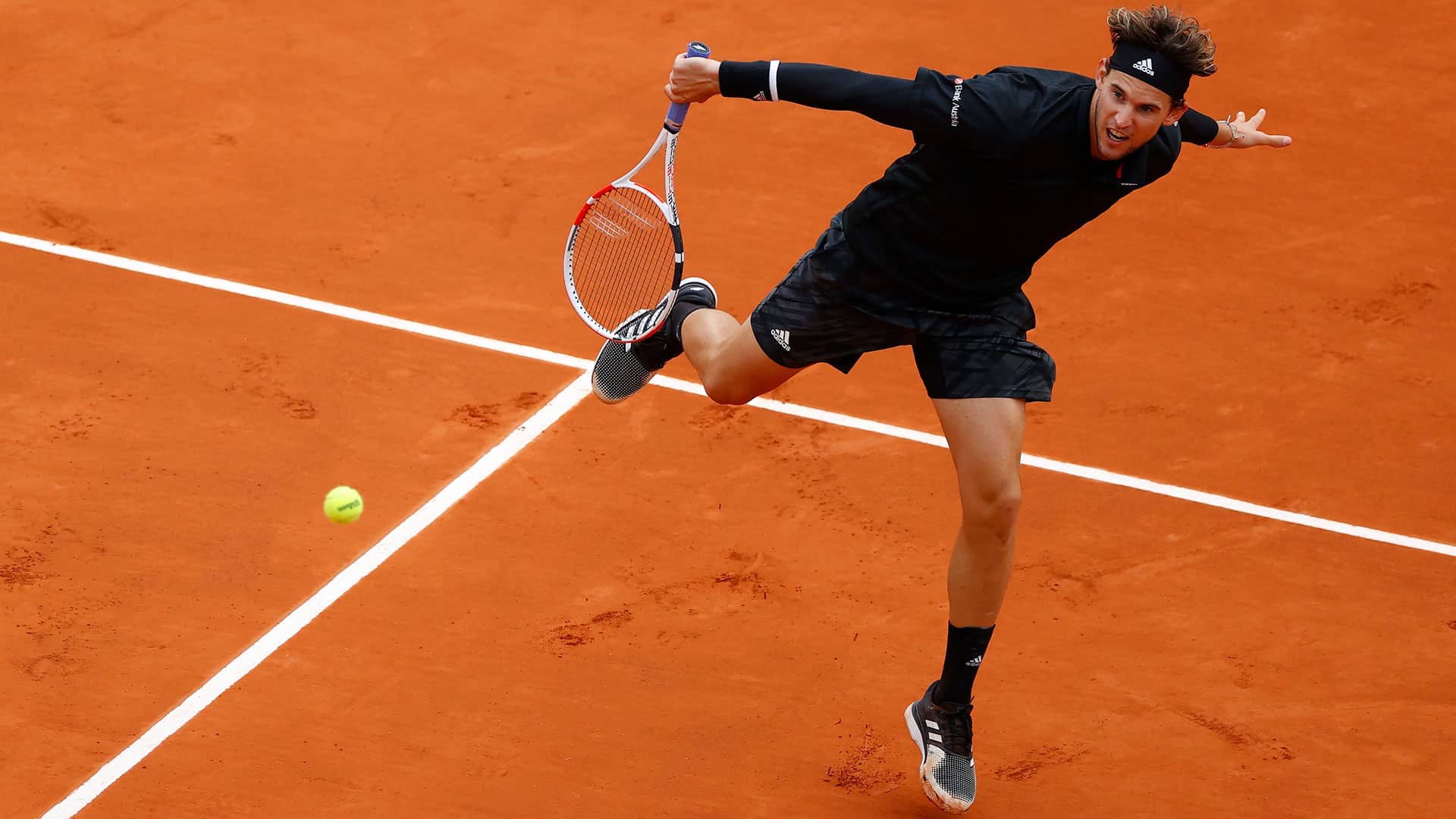 Thiem saved the first break point of the match, in the opening game, and went on to open up a 4-2 advantage, before Schwartzman broke back and was supreme in the tie-break, winning the first five points.

Thiem immediately regrouped to take a 3-1 lead in the second set, but hit his first double fault to hand Schwartzman the sixth game. At 4-4, Schwartzman dealt Thiem a psychological blow, saving seven break points in a 15-minute hold.

But a forehand miss from Schwartzman on top of the net, with Thiem serving at 4-5, 15/30, proved to be pivotal. It shook up the Austrian, who broke for a 6-5 advantage for a way back into the pair’s ninth ATP Head2Head meeting. The titanic 68-minute second set ended with Schwartzman, often seen scurrying behind the baseline, striking a backhand into the net.

Thiem appeared set to break clear when he clinched the first game of the third set, which incredibly featured eight breaks of serve. Schwartzman opened up 3-1 and 5-3 leads, but forehand errors, on both occasions, cost the Argentine. Thiem, struggling on serve throughout, gifted Schwartzman a set point at 4-5, 30/40, but the Argentine over-hit a backhand and came under pressure in the next game, when he was broken after striking a backhand long.

Thiem, serving for the set, was then broken to 15, but won five straight points from 0/1 in the tie-break. Schwartzman saved two set points from 4/6, but Thiem made it third-time lucky at 7/6 with a smash winner.

Thiem again looked primed for his 21st victory in 26 matches this season, when he took a 2-0 lead in the fourth set. But Schwartzman kept fighting and won four straight games. Just as Thiem’s energy levels looked to dipping with Schwartzman at 5-4, 40/0, the Austrian saved three set points — the final one with an outstanding running forehand winner down the line.

Thiem then levelled the score at 5-5 when Schwartzman hit a forehand into the net. Again, the Argentine almost conjured up a way back, but it was the sheer power of Thiem that saved a break point at 30/40 in the next game. Thiem broke clear early in the tie-break, but Schwartzman held firm to take the clash to a decider once Thiem hit a backhand wide.

Thiem continued to strike with great power in the decider, but Schwartzman stepped up with a 3-2 lead to out-rally the World No. 3 and didn’t look back.

" At the end, I gave everything I had out there," said Thiem. "It was an amazing match. I think the first in my career over five hours. Diego fully deserves it.

"I came back unbelievably in the fourth set. When he served for it at 5-4, 40/0, I played this down-the-line winner. The match was basically all the time on the edge for both of us. [In the] tie-break at 5-5, he played a great point. With that, I think he had a little advantage in the fifth set. I think, if I would have wanted to win that match, I should have done it in four [sets]. In the fifth set, he was just a little bit fresher and better than me."

Thiem, 28, who saw his 11-match winning streak come to an end, is now 28-7 on the season. He captured his first Grand Slam championship title at the US Open (d. Zverev) on 13 September.

Did You Know?
Coming into Roland Garros, Schwartzman was 0-18 when serving at 0/40 this season. The Argentine has now served five times at 0/40 during the clay-court major – once against Lorenzo Giustino in the second round (held), once against Lorenzo Sonego in the fourth round (broken) and three times against Thiem (one hold, twice broken).