Exclusive: US Open Champ Thiem Says ‘My Life Cannot Depend On Success’

When Dominic Thiem was growing up, he always dreamt of winning a Grand Slam title. After turning that into a reality by triumphing at the US Open, the Austrian doesn’t want the victory to change who he is off the court.

“I hope that it doesn’t change my life because my life cannot depend on success. That would be wrong,” Thiem told ATPTour.com. “But I hope it definitely changes my career. I achieved the biggest goal so far that I set for myself and I hope that it lets me play more free and even better tennis in the next big tournaments coming up.”

The 27-year-old became the first player to lift his maiden major trophy since Marin Cilic emerged victorious at the 2014 US Open. Between the 2017 Australian Open and this past fortnight at Flushing Meadows, only members of the Big Three — Roger Federer, Rafael Nadal and Novak Djokovic — earned Grand Slam glory.

“I think that more younger players will win major trophies in the future, yes, but the Big Three are still around. The next huge tournament, the French Open, is just around the corner and Rafa and Novak are in the draw,” Thiem said. “I think whenever they are in the draw they are the biggest favourites to win the title just because they are who they are. But I think it was good for men’s tennis that there is a new face on the winning list.” 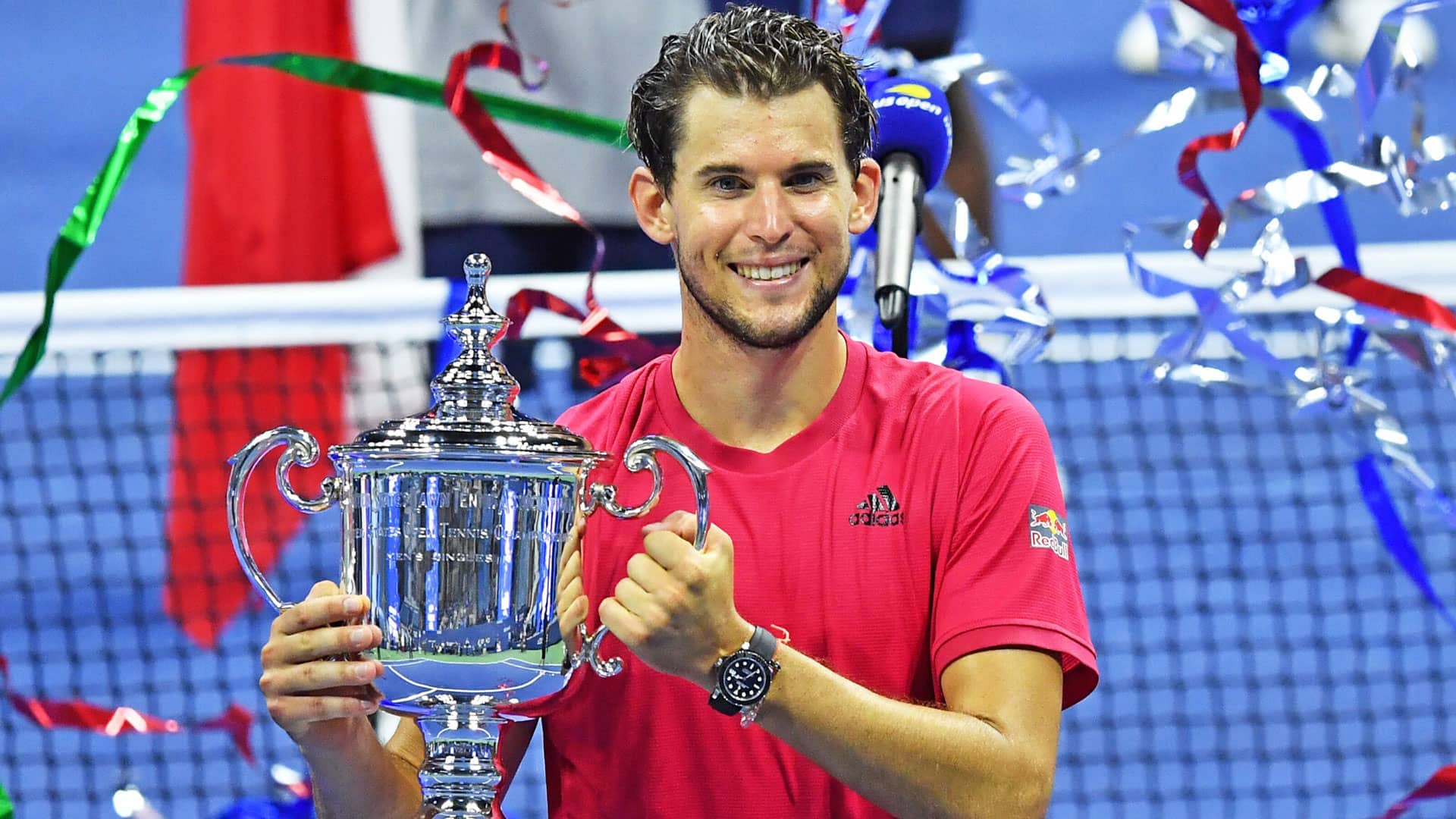 Photo Credit: Peter Staples/USTA
Thiem has proven he can compete with the best players in the world. When he is in full flight, the 17-time tour-level champion is capable of blasting through any opponent. It was ironic that in the biggest match of his life against Alexander Zverev, he relied a lot on his backhand slice in key moments, lengthening rallies as the match wore on. The Austrian admitted that nerves kept him from uncorking his signature one-handed backhand, especially towards the end of the five-setter.

“To pull off that shot, especially the backhand down the line, I need to feel free,” Thiem said. “I need to have a great acceleration in my wrist and my whole arm and I didn’t have it because of my nerves, because of my tightness. It was tough in the first two sets until I freed myself in the third.”

Thiem turned things around just in time, becoming the first US Open champion in the Open Era to rally from two sets down in the final. Now the Austrian, who has competed in four Grand Slam finals, has plenty of cushion at No. 3 in the FedEx ATP Rankings. He only trails World No. 2 Rafael Nadal by 725 points.

If Thiem overtakes Nadal, he will become the first player outside of Federer, Nadal, Djokovic and former World No. 1 Andy Murray to crack the Top 2 since Lleyton Hewitt in July 2005. Thiem is the 18th different World No. 3 since then, and the 11th of that group whose career-high remains No. 3.

“Honestly I didn’t think about the ranking at all so far. I was just fully focussed on the US Open the past weeks, but now the goal is to hopefully rise even higher in the rankings, which is super, super tough,” Thiem said. “We all know the two names who are in front of me, but now it’s time to enjoy this a little bit and then get ready for the French. It’s a great opportunity, two huge tournaments in a row and I’m looking forward to it.”