Dominic Thiem celebrates beating his good friend Alexander Zverev on Friday for a place in the Australian Open final.

Dominic Thiem booked his place in his third Grand Slam championship final on Friday with a hard-fought win at the Australian Open.

The fourth seed battled back from losing the first set, and saved two set points in the third set of a 3-6, 6-4, 7-6(3), 7-6(4) victory over first-time major semi-finalist, Alexander Zverev, the seventh seed from Germany, in three hours and 42 minutes on Rod Laver Arena.

“It was an unreal match, two tie-breaks, so tough and so close,” Thiem told former World No. 1 John McEnroe in an on-court interview. “It was almost impossible to break him, with [him getting in] such a high percentage of first serves. An Australian Open final is unreal, and what a start to the season so far.”

Thiem is the first Austrian to reach the Australian Open final, where he will look to beat second seed and seven-time champion Novak Djokovic and rise above Roger Federer to a career-high No. 3 in the FedEx ATP Rankings. The 26-year-old has previously finished as runner-up to Rafael Nadal at Roland Garros in 2018 and 2019.

“I have been twice in the Roland Garros final, twice facing Rafa, and now I am facing Djokovic, he is the ‘King of Australia’, winning seven titles here," said Thiem. "I will try my best and do everything I can to win. But if I walk off the court in two days’ time a loser, I will be patient and trust the process and continue to work hard.”

Thiem won 23 of his 27 points at the net, and hit 43 winners, including 10 aces. Zverev, who hit 103 of his 127 first serves into court, converted five of his 14 break point chances and committed 33 unforced errors. 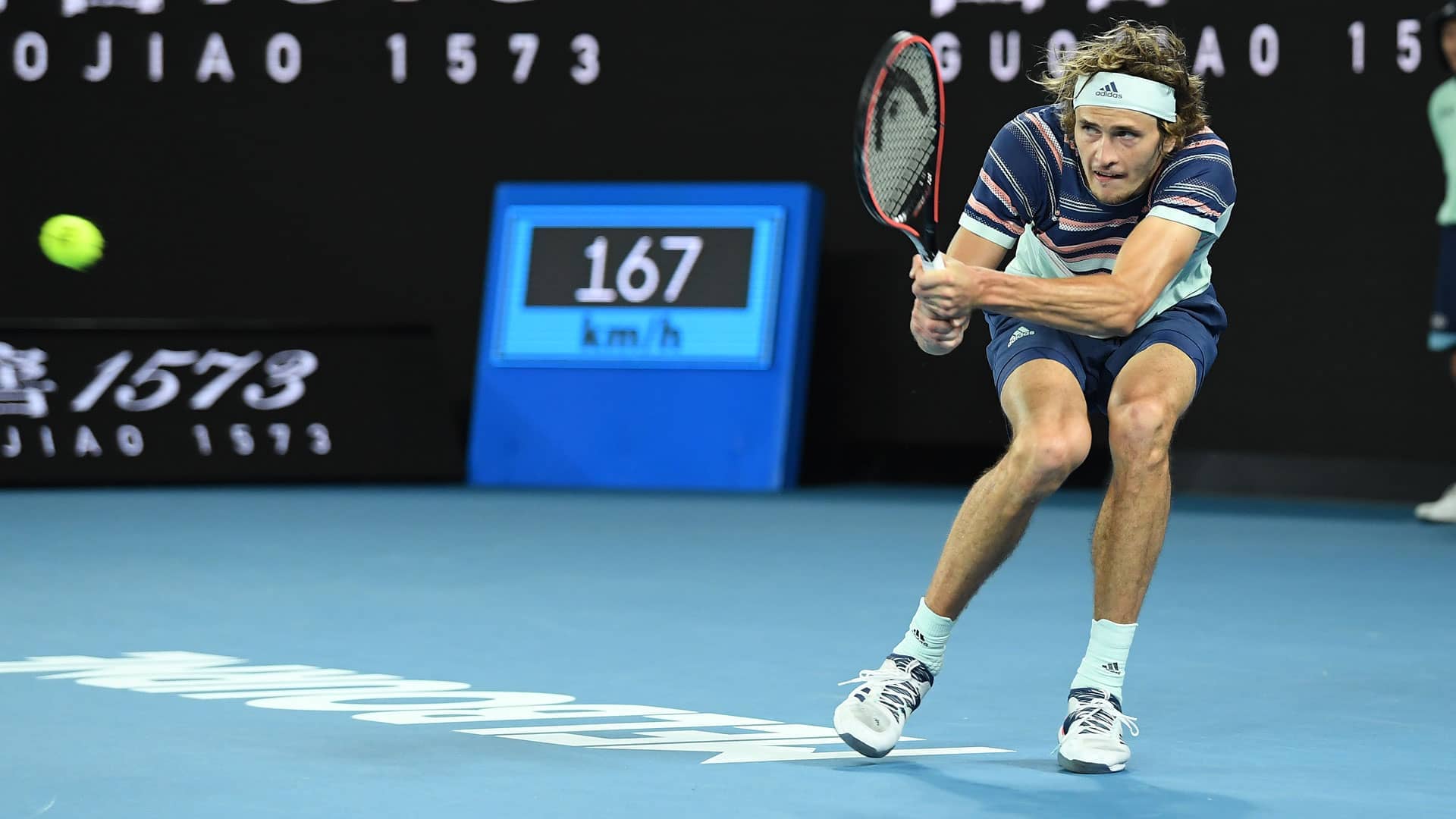 Zverev elected to receive and the decision reaped dividends with a service break, but Thiem got back immediately. Light rain began to fall in the fourth game and briefly suspended play and it was until 3-3, that Zverev put his foot on the accelerator, winning 10 straight points to a 5-3 lead and 0/30 on Thiem’s serve. Zverev clinched the 40-minute opener when Thiem hit a backhand into the net.

“I played four hours and 10 minutes against Rafa [Nadal], who is the most intense guy on Tour," said Thiem. "Almost every rally was so intense and long. I was in bed around 5 a.m. two days ago, so it was not easily to recover, then once the adrenaline came today, and by the time I walked into the full stadium I was fine. I had some trouble in the first set, we were both nervous I think and there were two breaks each. It was a tough start for me."

Zverev extended his run of four straight games by winning the first game of the second set, but service woes arose in the third game as Thiem gained the break. Zverev showcased his athleticism with a terrific pick-up close to the net at 3-2, with Thiem serving at 15/40, finishing with a smash to level the score. However, luck was on Thiem’s side in the next game, when a backhand return hit the net cord and dropped dead to set up two break points. Thiem, sensing his chance, rushed to the net at 15/40 for a volley that Zverev could not recover. Serving for the second set at 5-4, Thiem came under pressure, but saved two break points and clinched the 40-minute set with an ace — his third of the pair’s ninth meeting.

Go Inside The Match With Infosys MatchBeats

“In a Grand Slam semi-final, the level of both guys is so high and there were many key moments in the match," said Thiem. "I had to save three or four break points in the second set… I threw almost everything in at 3-1 [in the third set], even diving for a volley, which I don’t normally do on a hard-court, because it’s pretty painful, then he broke back straight away. I saved two set points, then was in a tie-break. It was nice to be two sets to one up, than down."

There was little respite for Zverev, who attempted to fight back from 0/40 at 1-1, but was left stranded at the net on the third break point when Thiem ripped a backhand crosscourt winner. Thiem saved a break point in the next game, then came close to a 4-1 advantage, but Zverev scrambled up a backhand winner off a dive volley from Thiem at 30/40. At 2-3, a clever return by Zverev caught Thiem slicing a backhand into the net and the German’s confidence grew as he won 10 of the next 16 points. While Thiem’s forehand began to break down at 4-5, his backhand held up and the Austrian saved two set points on serve. Thiem opened up a 3/0 lead in the tie-break and continued to dig in en route to finishing the 82-minute set with a backhand crosscourt winner.

“I felt nerves, having put in so much energy," said Thiem. "My stomach was rebelling a bit. I have it a little, when it’s close and a tough match. It’s not nice to play return games, when he’s hitting so many first serves. I didn’t have a look, really, in the fourth set… Thank goodness there is a tie-break in tennis, otherwise we’d still be playing."

There were no chances en route to a tie-break in the fourth set. But when Zverev hit a double fault at 0/1, Thiem gained the advantage and fully broke clear when he took a 5/3 lead. Thiem completed his seventh win in nine meetings against Zverev with his 43rd winner – a forehand volley winner. 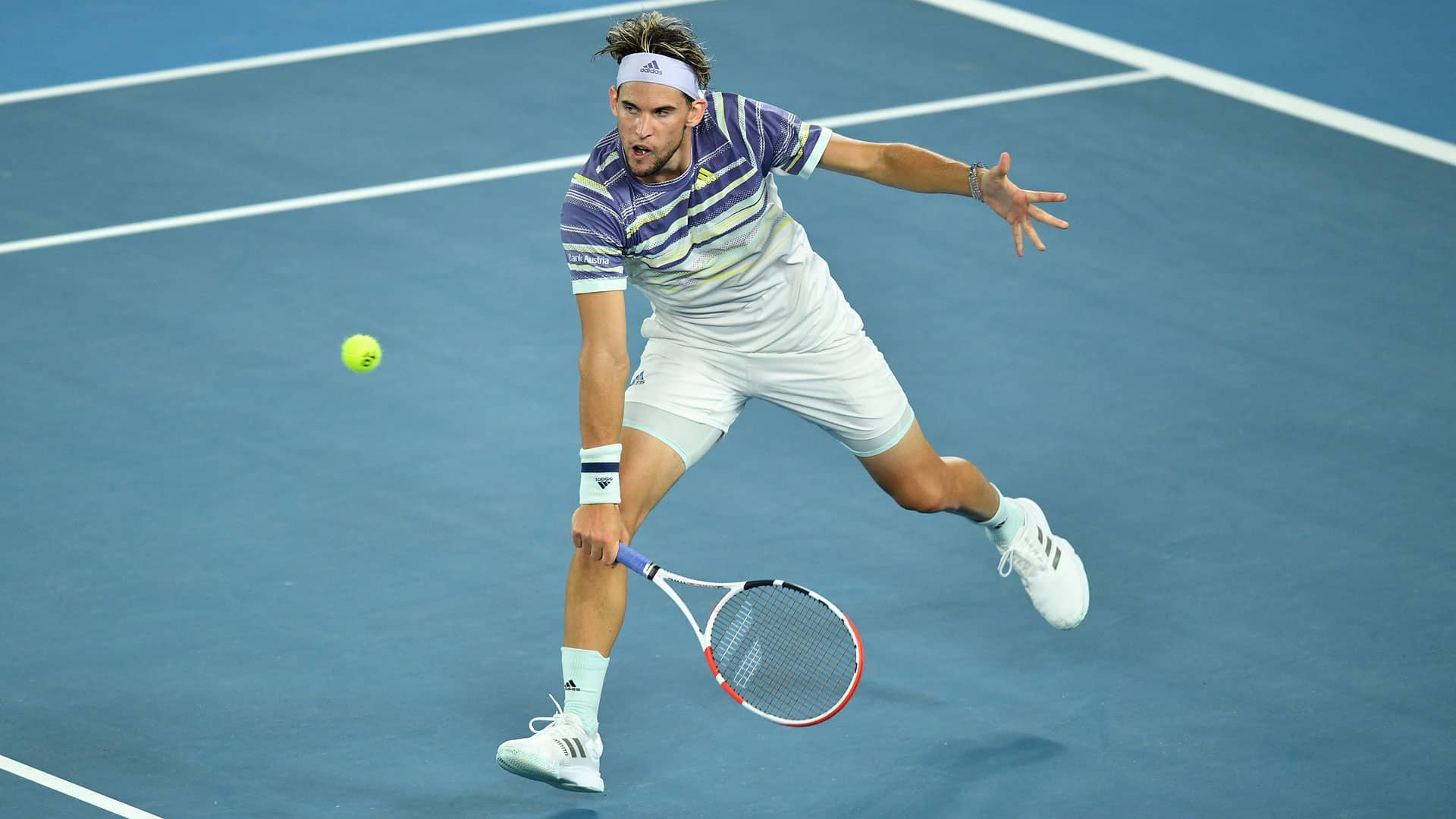 If Thiem goes on to beat Djokovic in Sunday’s final he will become the 150th different man in history to win a major championship title.

"[Alexander] had a horrible ATP Cup [going 0-3], but he worked hard for a week and he deserves it," said Thiem. "He is a great player, we’ve known that for a long time. It’s been a breakthrough week. I think both of us deserved to win today, maybe it’s experience or something else… I’m sure it won’t be long until he gets through to his first Grand Slam final."

Zverev, who has donated AU $50,000 towards Australia’s bushfire relief efforts — AU $10,000 for every match win in Melbourne — had been attempting to become the third German man to reach the Australian Open final, after Boris Becker (1991, 1996) and Rainer Schuettler (2003).

“It was a great tournament [and a] great match today,” said Zverev. I came to this tournament differently. I didn't play my best. I went step-by-step, match-by-match. Usually I didn't do that in Grand Slams. Maybe I can take that away, but right now I'm still a little bit disappointed about the match.

“I had a lot of chances. I had 14 break points. That should be plenty. In the important moments, I didn't play my best. He did. That's where the match kind of went his way. We've had a lot of tight moments, four tight sets. In the third set I had set points. In the fourth set, I had chances. [I’ve] just got to execute better next time. But credit to him, he's playing unbelievable tennis right now.”