Get To Know Thiago Tirante: 10 Questions For The First-Time Challenger Champion

#NextGenATP Argentine is surging in 2021 on the ATP Challenger Tour

No country has enjoyed more success on the ATP Challenger Tour this year than Argentina. On Sunday, the South American nation celebrated its 10th different champion of 2021, as Thiago Agustin Tirante joined the club. In fact, for the first time in 20 years, three Argentines aged 20 & under have lifted Challenger trophies in a single season.

Tirante added his name to a growing list of emerging stars, claiming his maiden title on the clay of Ambato, Ecuador. He joined #NextGenATP countrymen Sebastian Baez and Juan Manuel Cerundolo in the 2021 winners' circle, marking a historic moment for Argentine tennis.

As a Juan Pablo Varillas backhand found the net, an emotional Tirante collapsed to the clay at the Club Tungurahua. Overcome with joy, tears flowed down the 20-year-old's cheeks as he laid on his back and clutched his face. Nearly one year after appearing in his first final on the ATP Challenger Tour, he would go one step further in Ambato.

A 7-5, 7-5 victory over top seed Varillas capped a dramatic week for the former junior No. 1. The La Plata native opened the tournament with a pair of victories in deciding tie-breaks, before fighting past Facundo Mena in another third set in the semi-finals. And on Sunday, his victory over Varillas was one of the biggest wins of his young career.

After lifting himself off the clay, an elated Tirante leapt through the air, throwing his arms above his head in triumph. Raised by his parents and grandparents and introduced to the game by his aunts, he says the first thing he thought of was his family and their sacrifice. As he sat in his chair ahead of the trophy ceremony, the tears continued to flow. It marked the culmination of all the hard work and dedication to growing his craft, since he first decided to pursue a tennis career as a child in La Plata.

Tirante finds himself at a career-high No. 204 in the FedEx ATP Rankings with the victory.

He described the impact of the moment and reflected on his journey.

Thiago, congrats on winning your first title. How does it feel to be a Challenger champion?
I'm just so happy. It's incredible. This is my first year playing Challengers and it was my first title in my third final. I was feeling happiness: happiness for me, for my team and for my family. It's a very big title.

We saw you overcome with tears of joy after match point. Describe that feeling. Why was it such an emotional moment?
Yes, I cried. I was thinking about a lot of people. My grandparents passed away two years ago. I come from a normal family in La Plata. It's not a big city and I'm the second player from there to win a Challenger this year. Tomas Martin Etcheverry is from my same city, so that is amazing that we can both win titles.

There were too many things in my head, so I started to cry a little after the final. I was also nervous. I was thinking about my mom and my dad and all the efforts they have done for my tennis. I was thinking about my family and my team and the hard work we do every day. After the final I did so many photos and video and autographs and then I called my parents. I told them, 'I did it! We did it!'. It was an incredible week.

It was not an easy week. You won two deciding tie-breaks, then another deciding set in the semis and then beat the top seed in the final. How do you explain your success in Ambato?
That was crazy. Winning two third-set tie-breaks, almost losing the first and second round. And then in the final I played the top seed Varillas. He's Top 120 in the [FedEx ATP Rankings]. It's not easy to play in altitude and I served 52 aces all week - on clay - but I played better and better after the first match. In the final, I had my best match of the week.

I felt so good with my tennis, so good with my emotions and so good with my mentality. I have been working very hard every week, so I did expect this. In the two finals I played before (in Lima and Trieste), I lost. But in this match I entered the court thinking I had nothing to lose. I relaxed more. 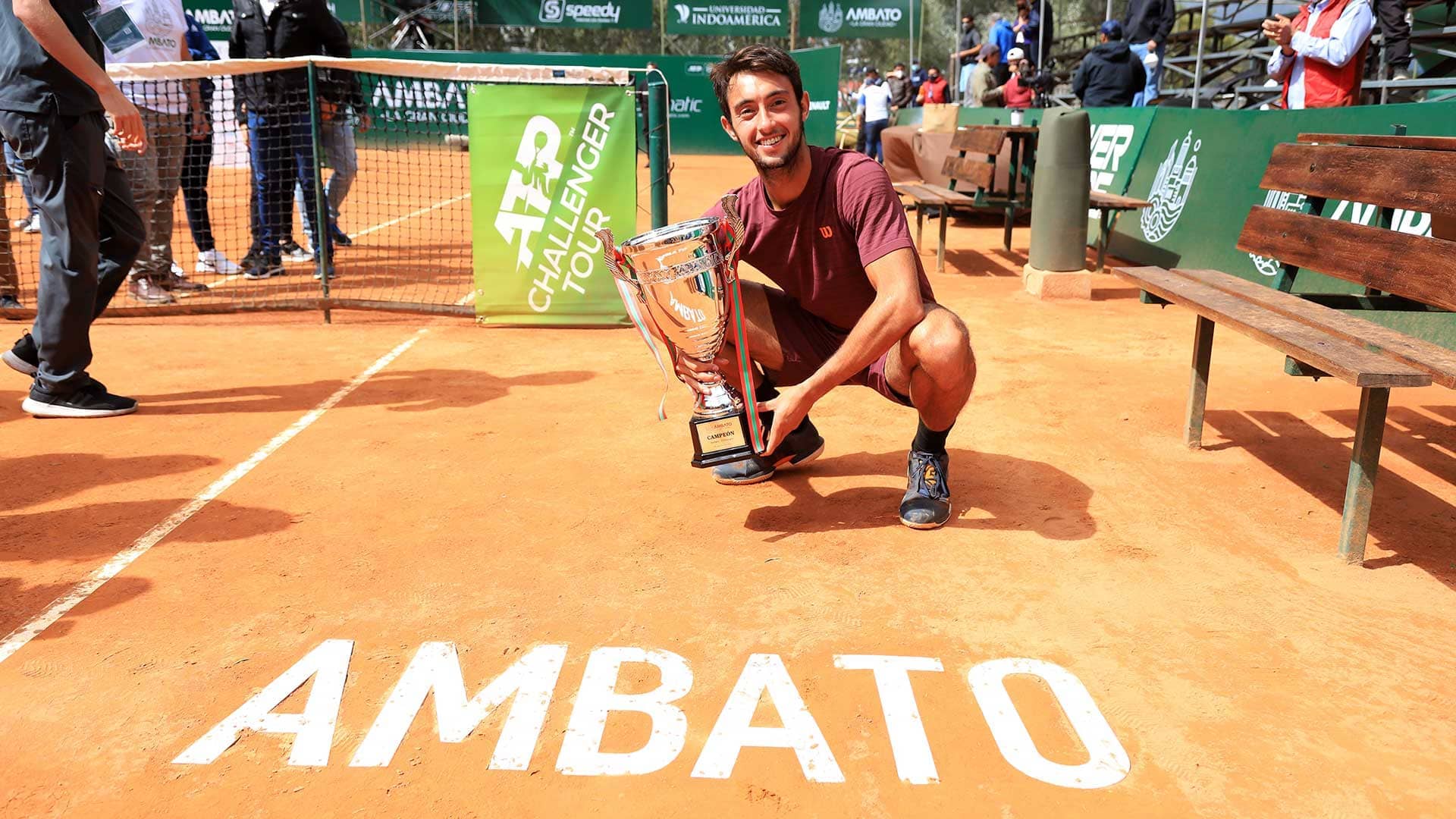 This is your first full year on the Challenger Tour. What is the biggest thing you've learned stepping up to this level?
I've learned a lot about my mentality and my tennis, of course. The way the guys play and the way they are off the court, it is very important for me to experience that. Not too many guys have the chance to compete at this level, so I am grateful for that. I hope I can pass this level as fast as I can. Every week I learn something.

It is an incredible time for tennis in Argentina. You are the 10th different champion from your country this year and there are many young guys like you, Baez, the Cerundolo brothers, Etcheverry and Carabelli. How much do you motivate and push each other? And how important is it to travel with these friends on the tour, when you're often competing far from home?
Of course we push each other. I am grateful for that. I know Juanma [Juan Manuel Cerundolo] and Seba [Sebastian Baez] since we were 10 years old. It's great that we are all playing good tennis. There are 10 champions and it's incredible that the three of us are part of it. I can't believe it.

It has been tough to travel with the Covid, but to have friends in the tournaments, to have dinner and spend time together after matches and the practices, you always have someone to talk to. That makes the difference. It is really important for me. They are friends and you need to do things so you are not always thinking about tennis.

Two years ago, you were a sparring partner at the Nitto ATP Finals in London, hitting with Roger Federer, Rafael Nadal and Daniil Medvedev. What was that experience like for you, as an 18-year-old practising with those top guys?
It was the best week of my life. I can't describe it,  hitting with Federer, Medvedev and Rafa. I shared one week with them and I still don't believe it. It was really important for me. When I hit with Roger, during the changeover, they were asking me questions about my ranking and which tournaments I'll play. He and his team really relaxed me. It was an incredible feeling to have the chance to talk with him.

It was funny. In our second practice, we played a match in the last 15 minutes. I broke him in the first game and led 3-1. At that point I said, 'ok, I am beating Roger Federer, the practice can end now'. We were laughing. Then he broke back and won 4-3 and said, 'ok, goodbye, good training'. It was amazing.

Then, two months after I went to the Nitto ATP Finals, I was in Bogota for an exhibition with Nicolas Mejia. We opened the ceremony, playing one match together. After our match, it was Federer and Zverev playing. There were so many people in the stadium. While I was leaving the court, Federer was coming down the stairs, and I was thinking that I can't say hi because he had security and there were so many people. But he stopped and said, 'Hey! How are you?'. I said, 'Hi Roger! Nice to see you!.' I couldn't believe it. Roger Federer remembered me. It's incredible.

Your aunt coached you for many years. How important is family for you? Is she still an important part of your career?
It's really important to have the chance to work with someone who is close to you, especially in this chapter of your life. You have more security when you are travelling and training with someone from your family. It's really important for me because we experienced all the tennis life together. We went to ll the tournaments together and I felt really comfortable and secure. She wasn't just my coach, but my family, so she really cared about me, my life and my career.

I come from a very hard-working family. My father, Gonzalo, works in flooring and my mother Mariné does cleaning in hospitals and pharmacies. They gave me a lot of strength, a strong mentality and good values. It is very important to work hard in life.

I have one tattoo that says, 'If you can dream it, you can do it'. It is in English and it's on my chest. 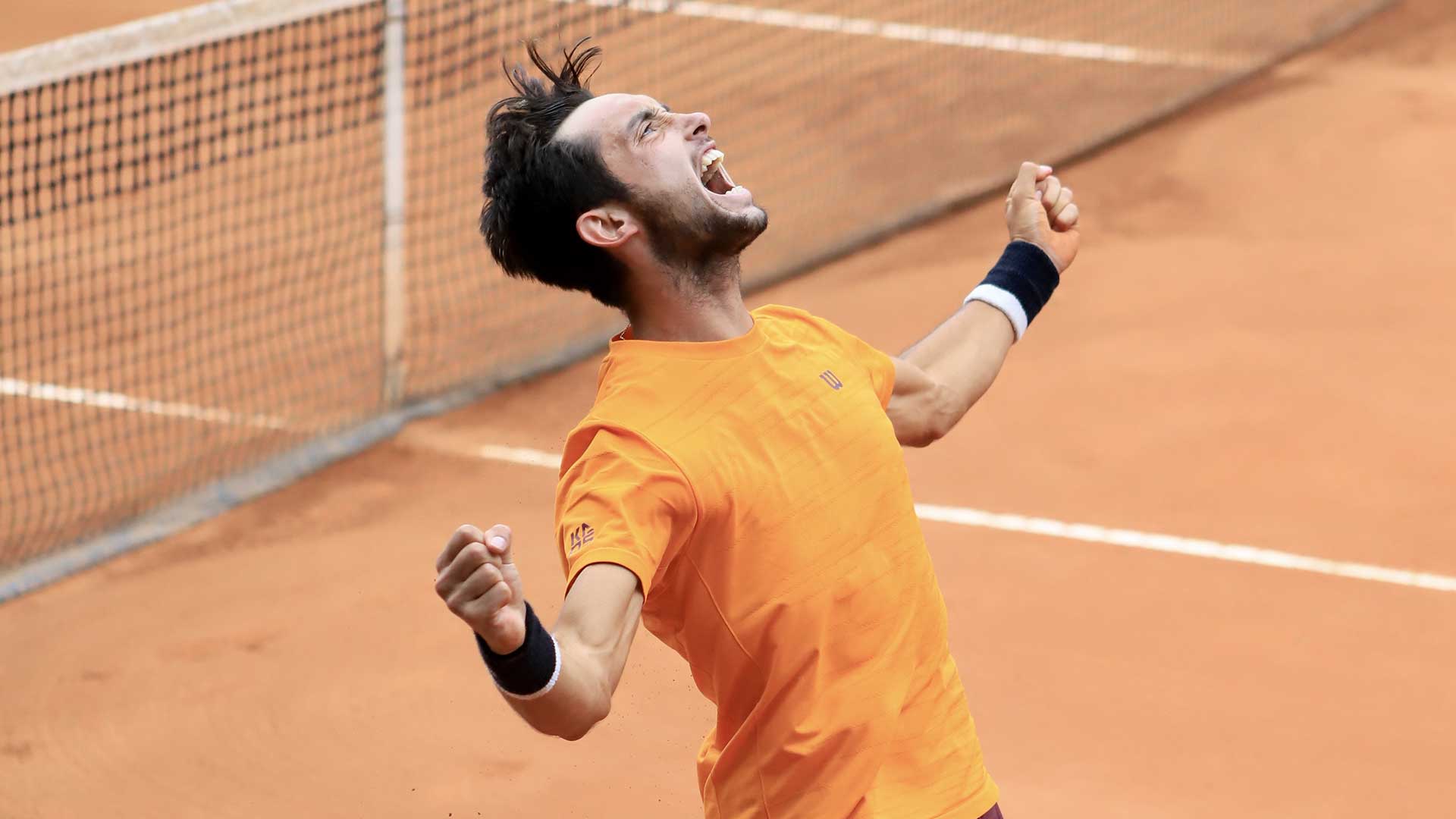 How did you get your start in tennis?
My grandfather bought a tennis club in La Plata when I was two years old. It had two clay courts. My two aunts are tennis coaches, so I played there with them all the time. But I also played football, basketball and did swimming. I did a lot of other sports, but always with tennis. All my family played tennis, from my two aunts and my grandfather, so I did it too. When I was nine years old, I had to make a choice and I chose tennis.

Who was your idol growing up?
Juan Martin del Potro, of course. I hit with him in 2018. To share a court with Juan Martin is incredible. The people love him and he's one of the greatest. I want to be like that. I always saw him on TV and I've wanted to be like him, not just in tennis, but as a person. The way he played and he was with the people, I really enjoyed that.

What is your biggest passion outside of tennis?
I don't have a really big passion, but I just enjoy being with my friends and family. That is my perfect day at home. I play football, but I like to stay with my friends and my family. I'm not someone who needs to do something for my happiness. When I come to Argentina from Europe, I'll stay in the houses of my family and my friends and it's a really good feeling.