Felix Auger-Aliassime announced the addition of Toni Nadal (right) to his coaching team alongside Frederic Fontang ahead of the Rolex Monte-Carlo Masters.

Javier Mendez
This article contains:
Canadian and Spanish coach teamed up this week ahead of Monte-Carlo

Toni Nadal is back on the ATP Tour with Felix Auger-Aliassime. The No. 22 in the FedEx ATP Ranking, his coach Frederic Fontang and Toni himself made the announcement during a Zoom conversation on Thursday with journalists. “We’re calling you to announce that I’ll be working with Toni Nadal, starting from this tournament [Rolex Monte-Carlo Masters],” revealed the Canadian before answering some questions.

“We had the chance to work also together with him and Fred, and the rest of my team in Mallorca in December. But officially we are starting our relationship and our partnership. So far it’s been going really well,” added Auger-Aliassime, who will be playing his first clay match of the year in Monte-Carlo.

ATP Tour.com caught up with Nadal and Auger-Aliassime ahead of Monte-Carlo to discuss their new partnership and expectations – as well as what would happen should the Canadian take on Rafael Nadal.

Why did you decide to add Toni Nadal to your team?
Felix Auger-Aliassime: At the end of last year, I sat down with Fred, the rest of my team, my parents… I told myself that it would be good to go to somebody who has been at the highest level of our sport. Someone who has been to where I want to go one day. We approached Toni with the possibility to come to Mallorca to meet him, to train and to discuss, so we did.

And what convinced you to take on the challenge of coaching Felix?
Toni Nadal: I’d already had a chat with him quite a while ago and he left a good impression on me. Also through my nephew, everyone has always had nice things to say about him. When the idea of working together was put to me, I told him to come to the Academy in 10 days so that we could get to know each other and to see whether what I had to say to him would be of use.

You May Also Like: Felix Training At Nadal's Academy In Spain

And you decided to try it out...
Nadal: I’m still the director of the Rafa Nadal Academy by Movistar, and of course I’ve worked with my nephew – I’m his uncle and I hadn’t considered being with another player. Knowing that I have the chance as director of the Academy to work with a player with huge potential is a challenge to me and, in particular, it gives me satisfaction. It’s a challenge for everyone.

How have the first days of coaching gone?
Auger-Aliassime: From the first practice, the work was great. The first thing is the respect, the honesty and the trust. For me, [those] are very important values that Toni tries to bring to the table. It matches and works with which I believe in. For me, they are simple things, but simple things that are not always easy to do. But are very important.

The consistency of my work, the precision of my work, the intensity that I’m gonna put and if I can repeat that at a very high level, I believe good things could happen. The great words that Toni has told me from the first time we were together with him and with Fred and I think it brings great things to me. I really like him as a person, so that’s a great thing.

What was the most notable thing for you?
Nadal: I wouldn’t be able to work with someone who wasn’t respectful, who had no values, because I’ve been lucky enough to work for my entire life with a boy who has always been respectful and has earned himself a good name. I aspire to that. I was delighted the moment they put the idea to me. Let’s not beat about the bush, this is a kid who theoretically should be among the best in the world in years to come. It’s always nice to work with someone like that. 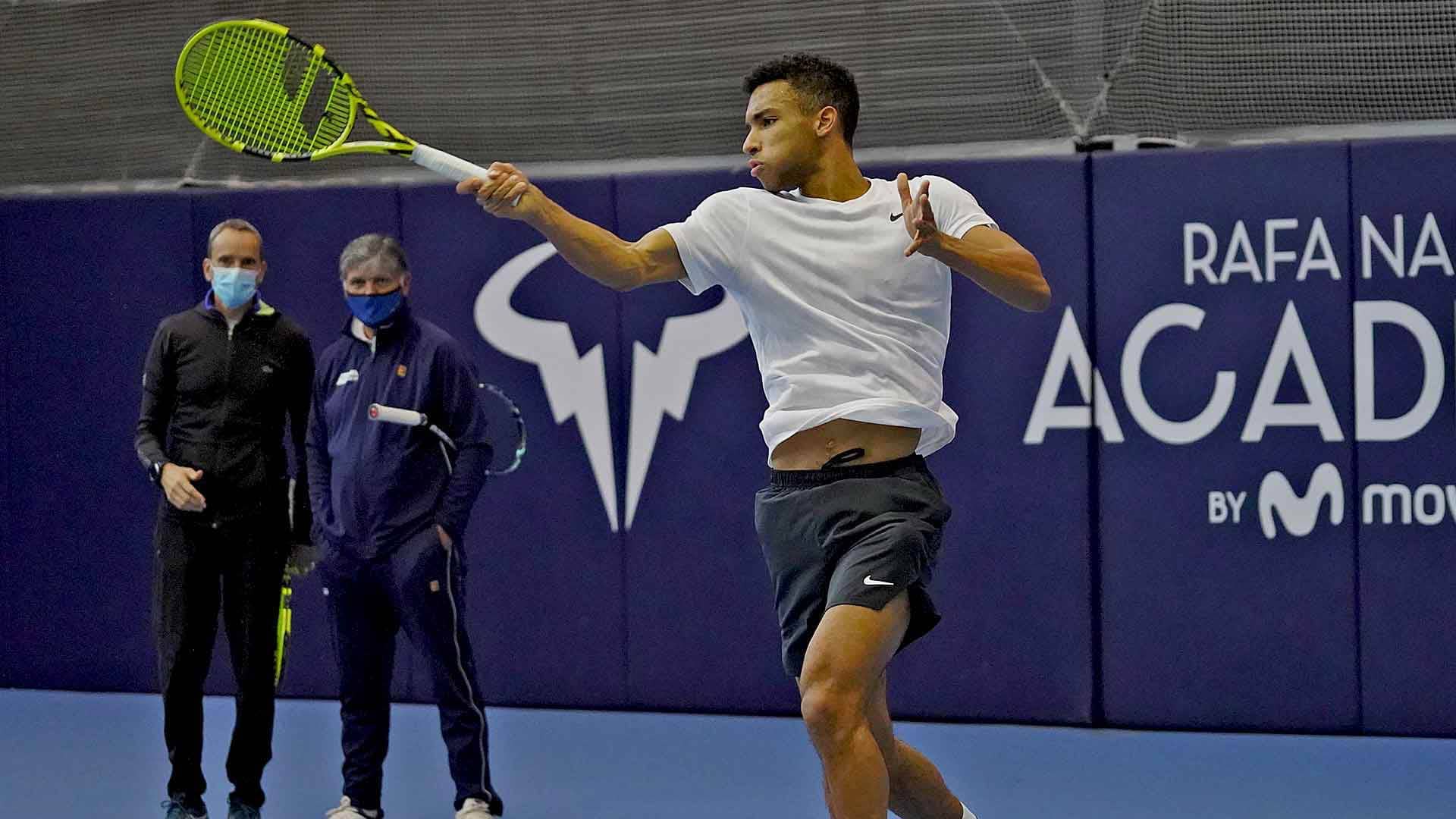 How will you work together?
Auger-Aliassime: Toni will be on the major tournaments, the Grand Slams and a couple of other big tournaments on the calendar. He’s giving advice, experience, but just working on the day-to-day to become a better player. It’s not like there is a secret tool or a single recipe where you click your fingers and things work. But we are at the start of working together and building something solid and neat becoming a better player overall. I think that’s what I want to do to reach the highest levels of tennis.

Do you remember the first time you saw Felix play?
Nadal: When I saw him play for the first time, we said to Rafael ‘this kid is going to be very good’. And I think that he should aspire to that. He left me with a feeling that he was a great player. I saw him in a Challenger event against Jaume Munar, a player from our Academy, and I thought, ‘What a player!’ He was 16, but you could already see that he would be one of the best in the world. Now he has to work to confirm it and to become that.

The competition is tough.
Nadal: At the moment we’re in an era of tennis with some very good players. Felix will have to compete in the coming years with players like [Daniil] Medvedev, [Alexander] Zverev, [Dominic] Thiem, [Stefanos] Tsitsipas, and other players coming through like [Jannik] Sinner and I guess [Carlos] Alcaraz too. The competition will be tough, but I believe he’ll be there.

The situation you’re describing is similar to what Rafael went through when he was starting out.
Nadal: Yes, it was a tough panorama with a lot of young quality players such as [Roger] Federer, [Andy] Roddick, [Lleyton] Hewitt, [Guillermo] Coria, [David] Nalbandian, [Juan Carlos] Ferrero, [Marat] Safin… They were all young and it looked like it would be very difficult to be at the top. We knew that we had to prepare in order to compete with players like that. I believe Felix has to do the same.

Having won practically everything as Rafael’s coach, why have you decided to return to the Tour?
Nadal: I’ve always liked tennis. I’m motivated by the process of trying to progress at what you enjoy, and I’m motivated by knowing that I’m working with a great person, with a player with great potential. That’s the challenge. I’m delighted on a personal and professional level to be able to work with a person like him and with a team as great as his.

What will happen when Felix has to face Rafael?
Nadal: I’m Rafael Nadal’s uncle and director of his Academy. But, above all, I have a special affection for my nephew. If he has to lose to someone, then let it be Felix. Forgetting that I’m his uncle, I’ve been linked to him for many years and the day they eventually play, I won’t be in either box out of respect to them both.

I am very interested in Felix doing as well as possible and hopefully in the future he can be World No. 1. I’m in no doubt. At the moment he has to improve, and I am still Rafael’s uncle.