A view of the main stadium court at La Caja Magica, venue of the Mutua Madrid Open.

Normally at this time of season, the Tour heads to Madrid. Sadly, the tournament this year was suspended due to the global COVID-19 pandemic, but fans can still celebrate the 30th anniversary of ATP Masters 1000 tournaments. This week, ATPTour.com reflects on the Mutua Madrid Open.

First held in 2002 on hard courts, the tournament switched to clay and a new venue, La Caja Magica, in 2009. ATPTour.com looks back on memorable moments from Madrid.

2002: The First Edition
In the Casa de Campo, just minutes from the city centre, the Madrid Arena hosted the first edition of the Mutua Madrid Open, replacing a Masters 1000 tournament held in Stuttgart. Built for the unsuccessful Madrid 2012 Olympic bid, the indoor hard-court tournament concluded with then 32-year-old Andre Agassi capturing a then-record 15th Masters 1000 title without hitting a ball. His opponent in the final, Jiri Novak, had torn a groin muscle the day before, towards the end of his semi-final victory over Fabrice Santoro, who had beaten Roger Federer in the quarter-finals.

2004: Model Ball Girls
The Masters 1000 tournament replaced traditional ball boys and girls with female models for the third edition. Given two weeks training, the professional models, aged 19 to 28, were selected from Spanish agencies. Marat Safin, who beat David Nalbandian for the 2004 title, said, “The models mean people are still talking about tennis. Good publicity, bad publicity. It doesn’t matter.” Agassi, the inaugural champion, had initially joked, “It was difficult, to say the least, to concentrate on the ball. But I suppose I had an advantage, I’m used to playing with my wife [former WTA World No. 1 Steffi Graf].” 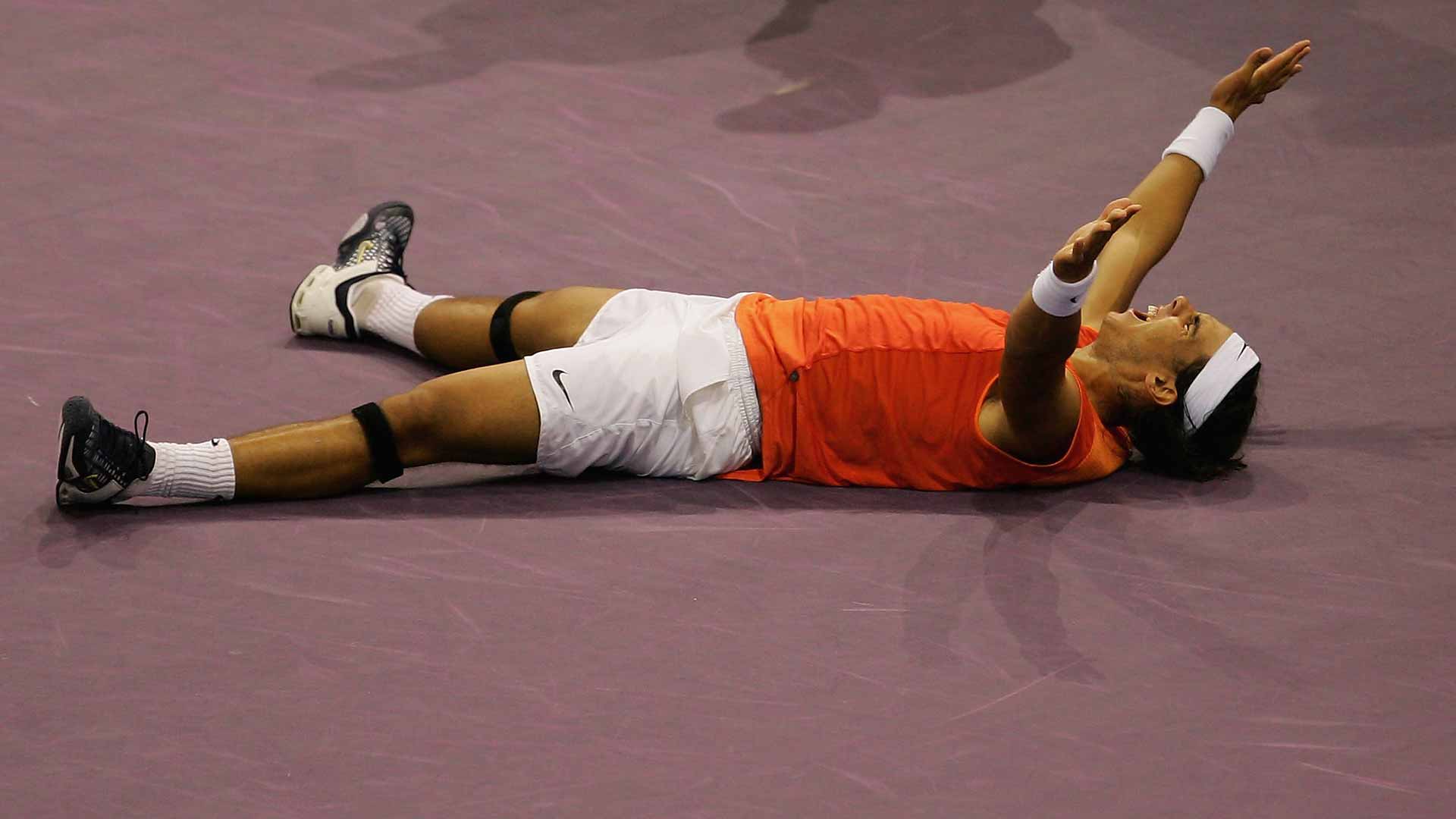 2009: Under New Ownership, Venue & Date Switch
Ion Tiriac, a former player turned billionaire businessman, became the new owner of the tournament in 2009, coinciding with a switch from hard courts to a clay-court event; to La Caja Magica, a multi-purpose stadium with three courts in the Manzanares Park Tennis Center, and a calendar switch from October to May. Ten years on, Tiriac told his native Romanian press that holding the combined event now benefits the city of Madrid in excess of €107 million.

2012: Blue Clay
Keen for innovation, Tiriac proposed to turn Madrid’s red clay to blue for the 2012 edition, benefitting television viewers around the world. While a single outside blue court had been available for player testing in 2011, with capacity crowds inside the three show courts the following year, the blue clay proved to be too slippery and the consistency of the bounce was uneven. Nadal and defending champion Novak Djokovic were skeptical, and both lost early, while Federer went on to lift the trophy with a 3-6, 7-5, 7-5 victory over Tomas Berdych. The Madrid tournament organisers returned to red clay in 2013. 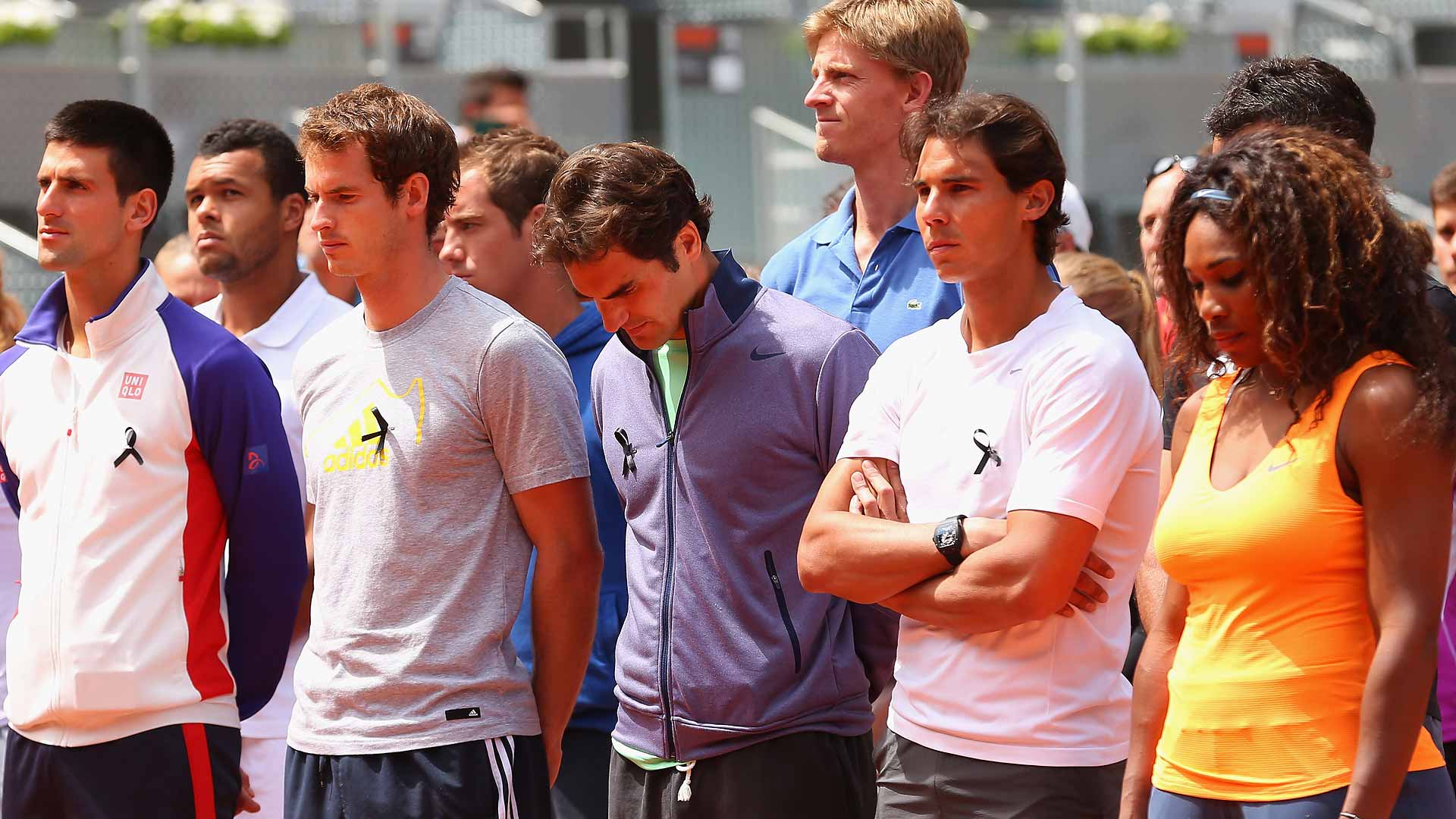 2013: In Memory Of Brad
Two days after the passing of Brad Drewett, the ATP Executive Chairman and President, aged 54, due to Motor Neuron Disease (also known as ALS or Lou Gehrig’s disease), stars of the ATP and WTA Tours took to the stadium court for a minute’s silence. Drewett, the former Australian player, had been involved in the sport for more than 40 years. Djokovic said, “It’s devastating news for not just us tennis players, but the tennis world. He was a very brave man with the courage to stand up and try to change some things in our sport for the better. We remember him as a very calm, composed and intelligent man, who loved this sport with all his heart, while he was playing, coaching and then as the President of ATP.”

2018: Santana Hands Over The Reigns
Manuel Santana, a winner of four Grand Slam singles titles, who helped Madrid become a world-class event as Tournament Director, had an assistant in the shape of Feliciano Lopez in 2018. Lopez, who had played in all 16 editions of the tournament, learned the ropes of event management before taking over in 2019. At the time, Lopez was the second active player to be named Tournament Director after Tommy Haas, the former No. 2, was named to the same position for the BNP Paribas Open in Indian Wells in June 2016. Santana, now the Madrid tournament’s Honorary President. said: “The Mutua Madrid Open is and always will be my home. It took us a lot of hard work to make this tournament happen and I will always be working to help it grow.”

2019: Djokovic Wins Third Madrid Title
Djokovic arrived at the Mutua Madrid Open last year looking to rekindle the kind of form that took him to the 2019 Australian Open title. With one quarter-final appearance in his past three tournaments, the World No. 1 beat two-time finalist Dominic Thiem 7-6(2), 7-6(4) in the semi-finals before overcoming Stefanos Tsitsipas 6-3, 6-4 for a then record-tying 33rd Masters 1000 title (with Nadal). "These are the best tournaments, biggest tournaments we have in our sport, in the ATP, of course alongside the Grand Slams," said Djokovic, who also won the Madrid title in 2011 and 2016. "This is as important and as good as it gets."