The Rolex Shanghai Masters is a five-time winner of the ATP Masters 1000 Tournament of the Year award.

Normally at this time of season, the ATP Tour heads to Shanghai for the penultimate ATP Masters 1000 event of the year. Sadly, the tournament this year was suspended due to the COVID-19 pandemic, but fans can still celebrate the 30th anniversary of ATP Masters 1000 tournaments.

The Rolex Shanghai Masters is a five-time winner of the ATP Masters 1000 Tournament of the Year award, claiming the title in each of its opening five years from 2009 to 2013. The event is held at the Qi Zhong Tennis Center, which also hosted the Nitto ATP Finals from 2005 to 2008.

ATPTour.com looks back on memorable moments from Shanghai.

In the final, Davydenko met Rafael Nadal for the seventh time in their ATP Head2Head rivalry (2-4). Despite his losing record against the Spaniard, the World No. 8 overcame Nadal 7-6(3), 6-3 in just over two hours to lift the trophy. It was Davydenko’s 18th victory in 23 tour-level finals. 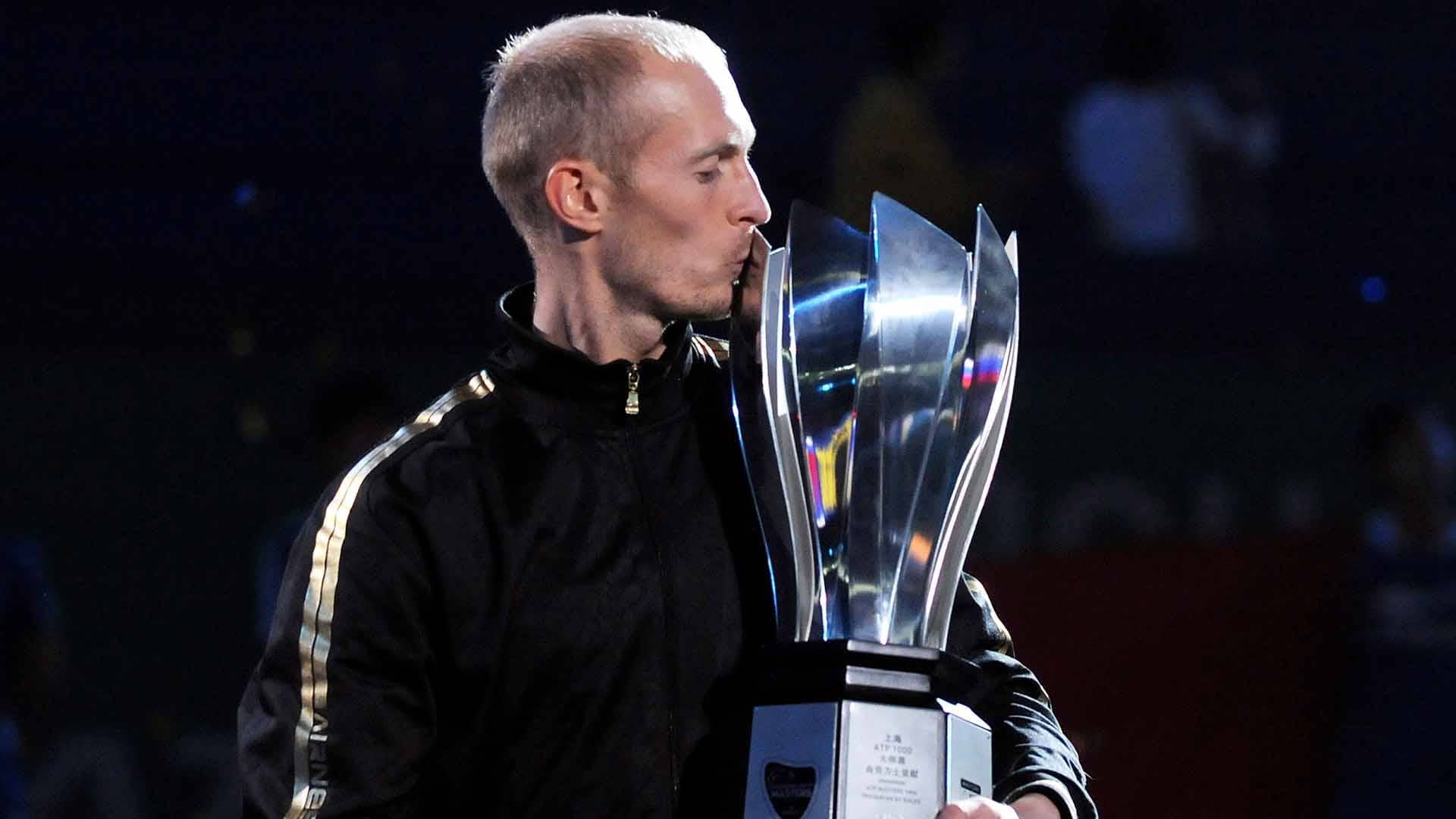 Two Titles For Murray
Andy Murray became the first man to win consecutive Rolex Shanghai Masters trophies, claiming the title in each of his opening two appearances at the Masters 1000 event. The Brit made his tournament debut in 2010, winning four consecutive matches in straight sets to book a final encounter against Roger Federer. Murray dominated the Swiss in the championship match, breaking serve on four occasions to earn a 6-3, 6-2 win in 85 minutes.

Murray returned the following year to claim his second straight crown in Shanghai, beating Stan Wawrinka, Kei Nishikori and David Ferrer en route to the trophy. The victory completed a dominant three-week Asian Swing for Murray, who claimed 13 straight victories across Bangkok, Tokyo and Shanghai to add three trophies to his collection.

“It’s been one of the best runs of my life,” said Murray. “I’ve played very, very well in the past few weeks.” 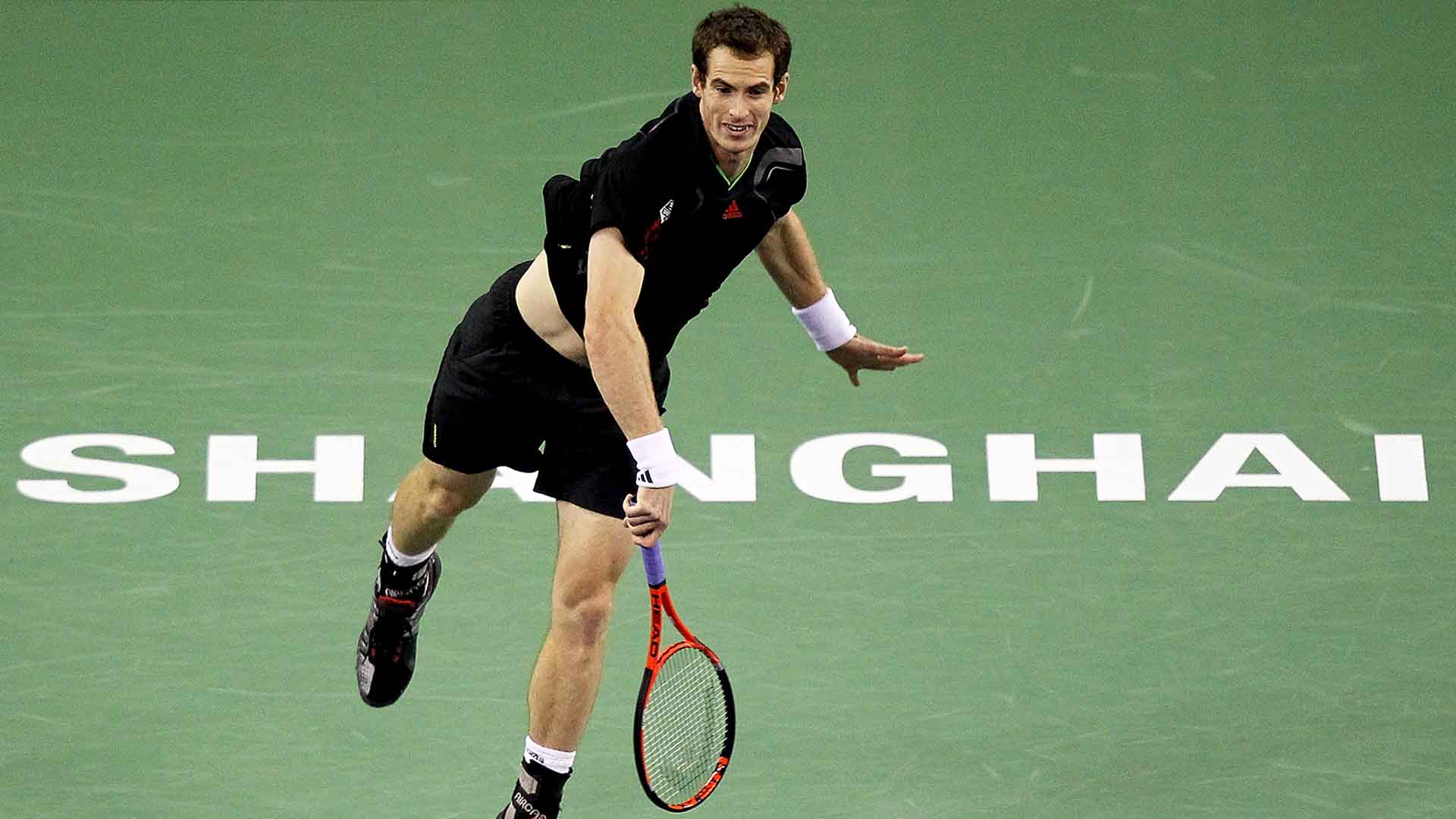 Djokovic’s Classic Finals
With back-to-back three-set final victories in 2012 and 2013, Djokovic joined Murray as a two-time champion in Shanghai. Djokovic captured his maiden Shanghai crown in dramatic fashion in 2012, ending Murray’s bid to win a third straight trophy at the event with a 5-7, 7-6(11), 6-3 victory after three hours and 21 minutes.

Djokovic was forced to save five match points in an intense second set, which featured a 24-point tie-break, before claiming late service breaks in the decider to take the trophy. In the following year, the Serbian earned his second Shanghai title with a final-set tie-break win against Juan Martin del Potro in the championship match.

Del Potro was aiming to add to his semi-final win against Nadal and win his first Masters 1000 trophy. With his final victory against the World No. 5, Djokovic completed the Beijing-Shanghai double for the second straight year and extended his winning streak in China to 20 matches.

After a Match Tie-break loss to eventual champions Ivan Dodig and Melo in the 2013 semi-finals, the American twins returned the following year to enter the history books. The Bryans dropped one set en route to their first final at the Chinese Masters 1000 event, where they overcame Julien Benneteau and Edouard Roger-Vasselin 6-3, 7-6(3). It completed a week of milestones for the Bryans, who also clinched the year-end No. 1 FedEx ATP Doubles Team Ranking for the 10th time during their visit to Shanghai.

“To win here, it's been a long time coming to Shanghai. To finally get across the finish line as the winning team was extra special today," said Mike Bryan.

“It's another great milestone. This week was full of them for us. To come and get in the title match, have a shot at winning the tournament that's eluded us, complete the Golden Masters, is amazing,” said Bob Bryan.

Federer, Nadal Meet Again In Shanghai
Almost 10 years after their most recent Shanghai meeting at the 2007 Nitto ATP Finals, Federer and Nadal once again met in the Chinese city in 2017. Both men had enjoyed a return to top form in 2017, winning two Grand Slam titles each and battling for the year-end World No. 1 position in the FedEx ATP Rankings.

Using the fast court conditions to his advantage, Federer dominated Nadal in their first final played in Asia to complete his second Shanghai title run (also 2014). The Swiss’ victory against Nadal extended his unbeaten streak against the Spaniard in 2017 to four matches.

Federer’s 700th tour-level win on hard courts also pulled him level with Ivan Lendl in second place on the Open Era titles leaderboard with 94 trophies. Despite the loss, Nadal finished ahead of Federer to clinch the 2017 year-end World No. 1 position. 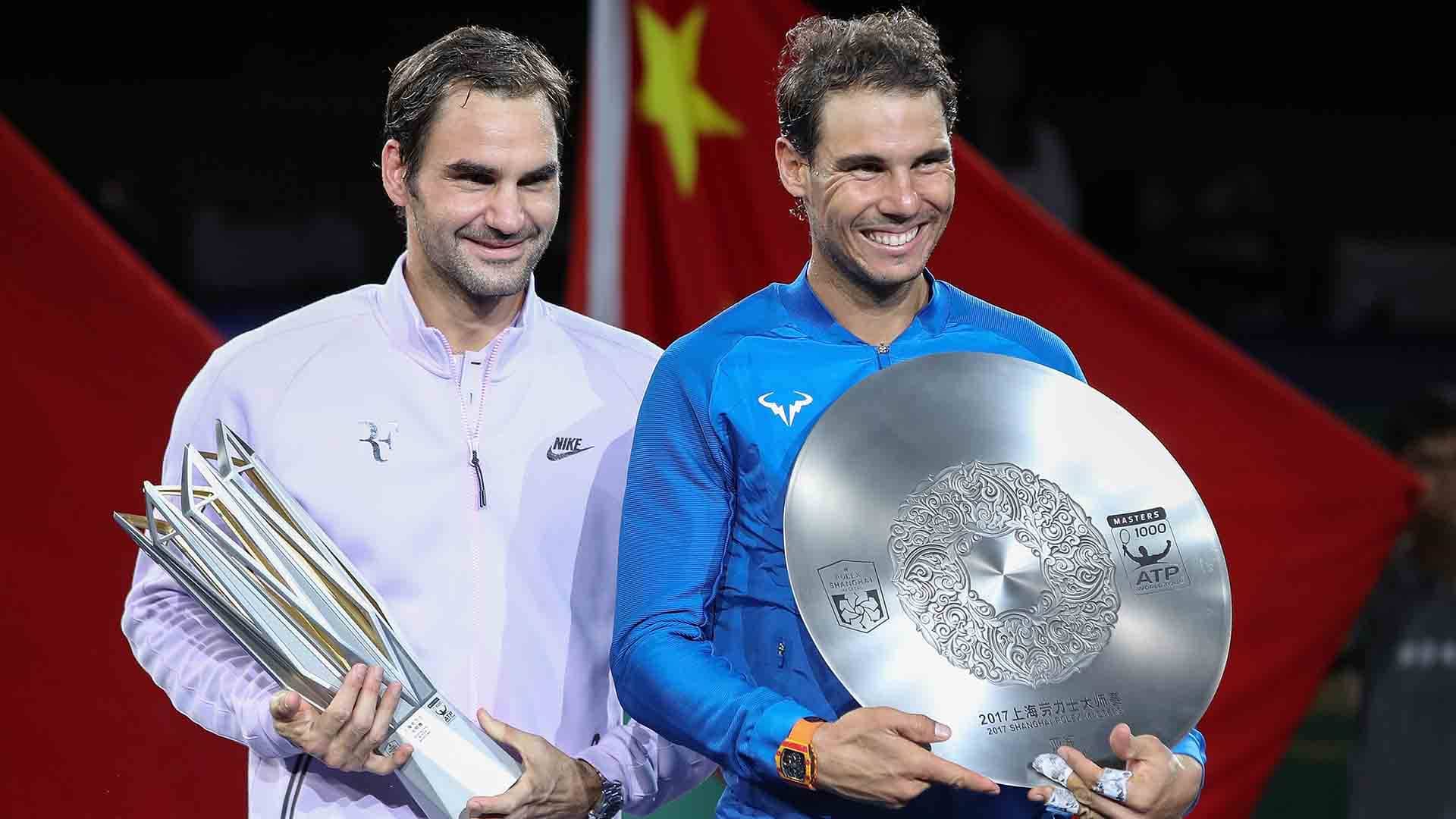 Djokovic, Melo Make History In 2018
In 2018, Djokovic and Marcelo Melo set a new benchmark for Shanghai singles and doubles champions, respectively. Djokovic became the first singles player to win four trophies at the event, claiming the title without dropping any of his 47 service games.

The Belgrade native charged through the draw in Shanghai and earned consecutive wins against Kevin Anderson, Alexander Zverev and Borna Coric to break a tie with three-time Shanghai titlist Murray. The victory helped Djokovic to finish the 2018 season as year-end World No. 1 in the FedEx ATP Rankings for the fifth time.

In the same year, Melo captured a record third doubles title in Shanghai to move clear of two-time winner Leander Paes (2010, ’12). The Brazilian, who also completed title runs in 2013 (w/Dodig) and 2015 (w/Klaasen), combined with Lukasz Kubot to secure the 2018 trophy. The Polish-Brazilian tandem defeated Oliver Marach and Mate Pavic in the semi-finals and Jamie Murray and Bruno Soares in the final to complete a memorable week in Shanghai. 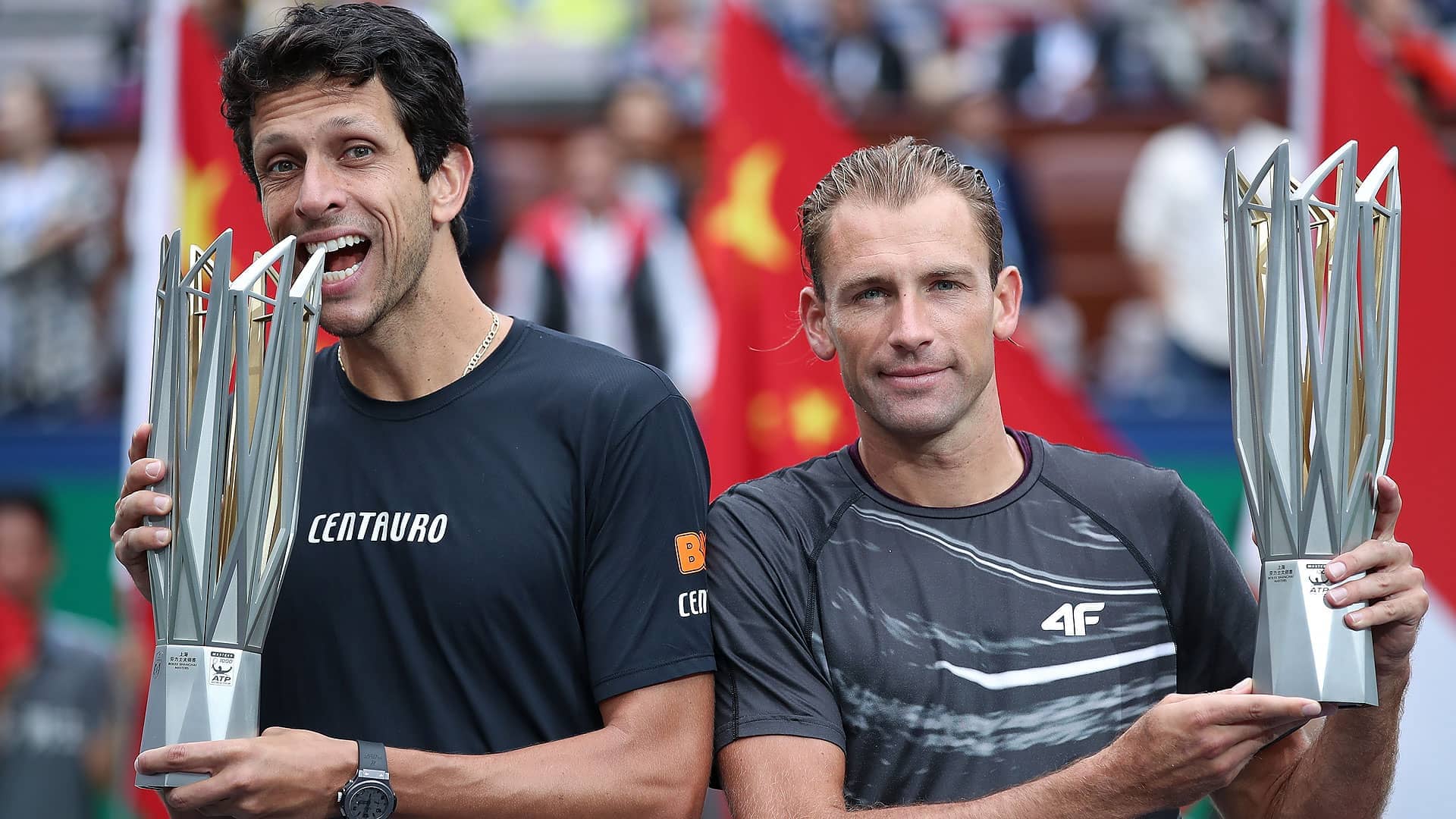 Medvedev Adds Name To Honour Roll
After nine years of dominance, Daniil Medvedev ended Djokovic, Federer and Murray’s stranglehold on the Shanghai title last year. The Russian battled past Stefanos Tsitsipas to advance to his sixth straight tour-level final, where he met Zverev in the first Rolex Shanghai Masters final not to feature a member of the Big Four.

Medvedev entered the contest with a 0-4 ATP Head2Head record against the German, but held his nerve in crucial moments to claim the title without dropping a set. It was Medvedev’s second straight Masters 1000 title, following his maiden triumph at the level at the Western & Southern Open in Cincinnati (d. Goffin).

"This one is also amazing because Shanghai I think is one of the most prestigious Masters [1000 tournaments] on the Tour," said Medvedev. "Especially in the past nine years, there were only three players who managed to win this one, so it’s really special to have my photo in the corridor over the next many years."