Come To Papa: How A Father's Sacrifice Spurred Tsitsipas' Success

Andrew Eichenholz
This article contains:
The Greek will play Medvedev in the Australian Open semi-finals

Editor's note: This story was first published on 18 February 2018

After winning the championship match of the 2018 Next Gen ATP Finals, Stefanos Tsitsipas returned to the players’ area and celebrated with his team. Front and centre was Apostolos Tsitsipas, the Greek’s father and coach. Their smiles spoke louder than words.

During that event, the younger Tsitsipas often avoided putting on his headset to talk to his father, sometimes leaving Apostolos, who was keen to give his son advice, cracking up. But after the Greek star clinched the trophy and the fans had departed, Stefanos rubbed his father’s cheeks as his way of saying, “we did it”. Apostolos brought his son closer and gave him a kiss.

“I’m learning every day,” Apostolos told ATPTour.com in 2018. “Hopefully one day I will be a good enough coach for my son for his future demands and his future dreams.” 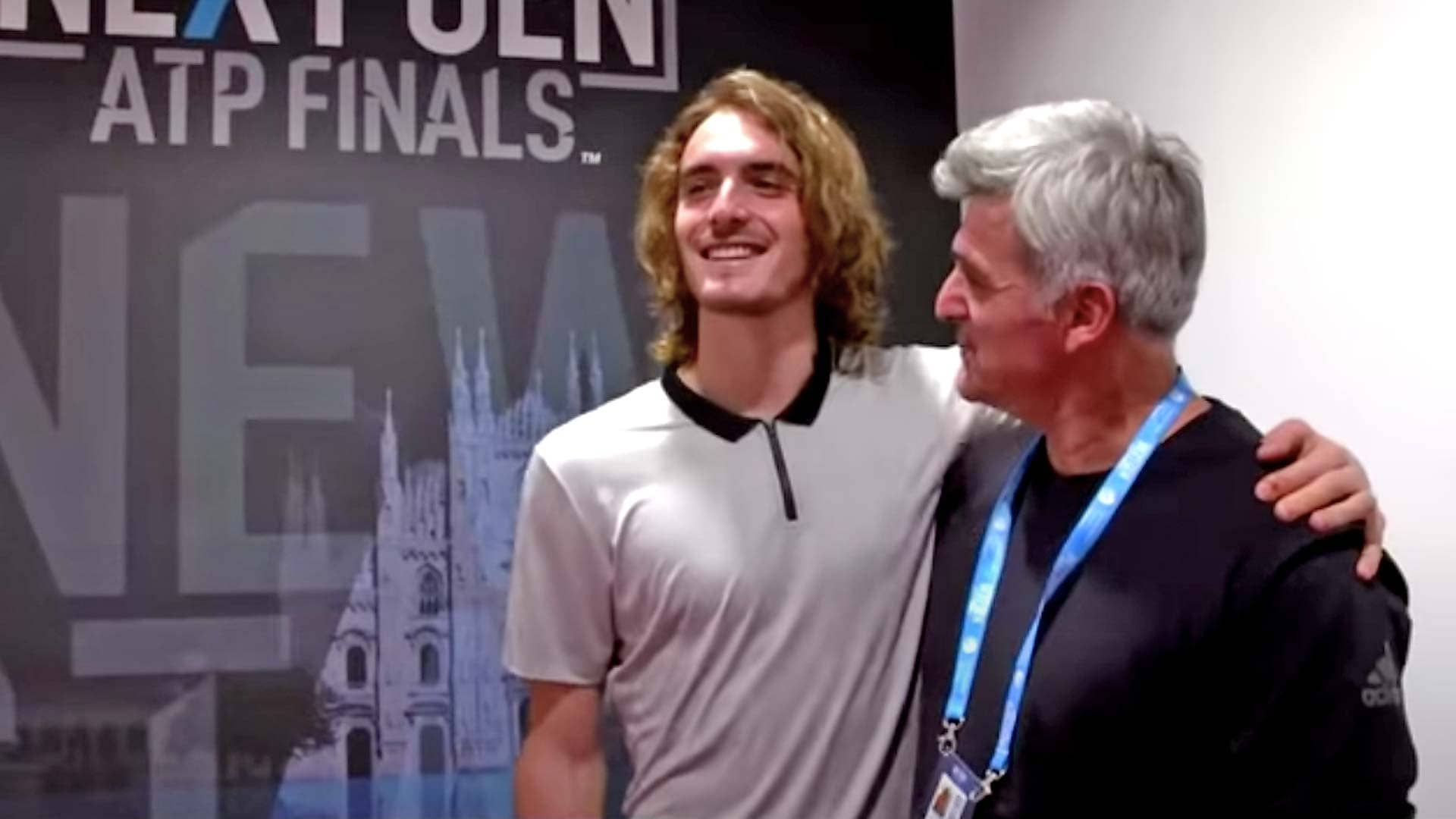 Apostolos has long sacrificed whatever he could to allow his son to pursue those dreams. The 53-year-old did not play his first tennis tournament until the age of 23, and he would spend time as a teaching professional in Athens. Stefanos' mom, Julia Salnikova, cracked the WTA's Top 200 in singles and doubles. When Stefanos was 12, someone needed to travel with him to tournaments. Apostolos quit his job and became his son’s full-time coach, while Salnikova stayed home with the rest of the family.

“I don't know if he had a choice, but he just risked it. He just quit himself and started travelling with me,” Stefanos said at 2018 Wimbledon. “I do appreciate what he did for me, because it's amazing. Not many fathers would do this for their son.”

Tsitsipas’ success has validated his father’s sacrifice. When Stefanos won the Next Gen ATP Finals, he was already the No. 15 player in the FedEx ATP Rankings. One month earlier, he had won his first ATP Tour title at the Stockholm Open. It wasn’t a matter of whether Tsitsipas could reach the upper echelons of the sport — the Greek was already there.

There was only one question: How high could Tsitsipas could climb? Then 20, he admitted that he learned something that week at the Fiera Milano.

“I’ve learned that I'm a fighter,” Tsitsipas said. “That I have a big heart.”

Two months later, Tsitsipas made his biggest Grand Slam breakthrough, reaching the semi-finals of the 2019 Australian Open. During that run, he stunned Roger Federer in four sets. But Rafael Nadal showed the Greek wasn’t quite ready to go all the way, delivering a 6-2, 6-4, 6-0 beatdown that left the Greek struggling for answers.

“It kind of felt like in a way it wasn't tennis so much like the other matches that I played,” Tsitsipas said. “It felt like a different dimension of tennis completely.”

But that was just the beginning. Tsitsipas beat Nadal for the first time that year in Madrid, and he cracked the Top 10 of the FedEx ATP Rankings. Later that year, the Greek star made the jump from #NextGenATP to “Now Gen”, lifting the trophy at the Nitto ATP Finals. The Greek was an established star, and his attacking game was clearly a threat to anyone at any time.

It wasn’t always easy for Tsitsipas, though. The Greek has faced setbacks. In the third round of last year’s US Open, he let slip six match points against Borna Coric and could only watch a week later when Dominic Thiem and Alexander Zverev, both of whom he beat en route to the 2019 Nitto ATP Finals title, competed for the trophy.

Tsitsipas has never been one to wallow in his sorrows, though. The 6’4” right-hander has always managed to learn from his losses. One month later, he reached the semi-finals at Roland Garros, where Djokovic needed five sets to advance.

“Losing kind of keeps you in the same place, in the same spot, which is why I hate losing. Of course, I think everyone hates losing. It's weird if you don't hate losing,” Tsitsipas said. “But I guess a loss is a very good lesson where life puts a stop [to] what you're doing. You can reflect on that. You can grow. You can get better.”

You May Also Like: Tsitsipas Completes Epic Comeback, Stuns Nadal In Melbourne

In Wednesday’s Australian Open quarter-finals, Tsitsipas once again lost the first two sets against Rafael Nadal at Melbourne Park. The Spanish legend was pursuing a record-breaking 21st Grand Slam title. But Tsitsipas did not give up. He fought back, and triumphed 3-6, 2-6, 7-6(4), 6-4, 7-5 after four hours and five minutes.

“Moments like this haven't happened a lot in my career, and the fact that I was able to come back the way I did and the way I fought against such a top, respected player like Rafa was something extra, something I have never felt before,” Tsitsipas said. “It was a first-timer.”

Tsitsipas had already accomplished a lot during his young career when he recovered against Nadal inside Rod Laver Arena. It wasn’t the first time he reached a Grand Slam semi-final, and it wasn’t the Greek’s maiden victory against Nadal. Instead, it felt like Tsitsipas had come full circle. He had won the Next Gen ATP Finals trophy 830 days earlier and said, “I’m a fighter… I have a big heart.”

Stefanos showed it against Rafa, taking it to one of the most battle-tested icons in tennis history. It was only fitting that after the match, Tsitsipas walked over to his father in a moment straight out of a movie script. A decade ago, Apostolos quit his job to give his son anything he needed to pursue his dreams. Stefanos continues to make them come true, and he will try to take another step on his journey Friday when he plays Daniil Medvedev for a spot in his first Grand Slam final.

“To be able to just walk up to my team and hug them and share that little moment of appreciation and solidarity, it was epic,” Tsitsipas said. “It was everything I ever dreamed of, and I'm glad that I am where I am today. There is obviously light ahead at the end of the tunnel, and there is plenty more to go.”