Nikoloz Basilashvili sprung a surprise on Friday at the BNP Paribas Open, earning the biggest win of his career with a 6-4, 2-6, 6-4 upset of World No. 3 Stefanos Tsitsipas to reach his first ATP Masters 1000 semi-final.

The Georgian was competing in his maiden Masters 1000 quarter-final and produced an impressive performance as he caused Tsitsipas problems from the baseline with his powerful groundstrokes, raising his level in the third set to advance after two hours and nine minutes.

“I have played really great matches this tournament,” Basilashvili said. “I was not that happy with how I played today but I was happy with how I managed my stress levels. First time in the quarter-finals and it is a big court and Stefanos is a super tough player. I had to keep my physical levels and energy levels in a really good shape because I knew mentally I would be a little bit tight and stressed.”

With his victory, the World No. 36 has reduced the deficit to 1-2 in his ATP Head2Head series against Tsitsipas. Before this year, Basilashvili had never won a main-draw match in Indian Wells in four previous appearances. The 29-year-old will now face third seed Alexander Zverev or America’s Taylor Fritz for a place in the final.

Basilashvili, who rallied from a set-and-a-break down in his third-round victory against Albert Ramos-Vinolas, has won tour-level titles in Doha and Munich this year. The 29th seed's last Top 5 victory came against then-World No. 5 Alexander Zverev in Hamburg in 2019.

“I have spent a lot of time working hard,” Basilashvili added. “I have been playing really well. For me to overcome stressful moments I am really happy. I also found it here that the conditions don’t suit my game because the balls fly a lot, but this year I am playing well.” 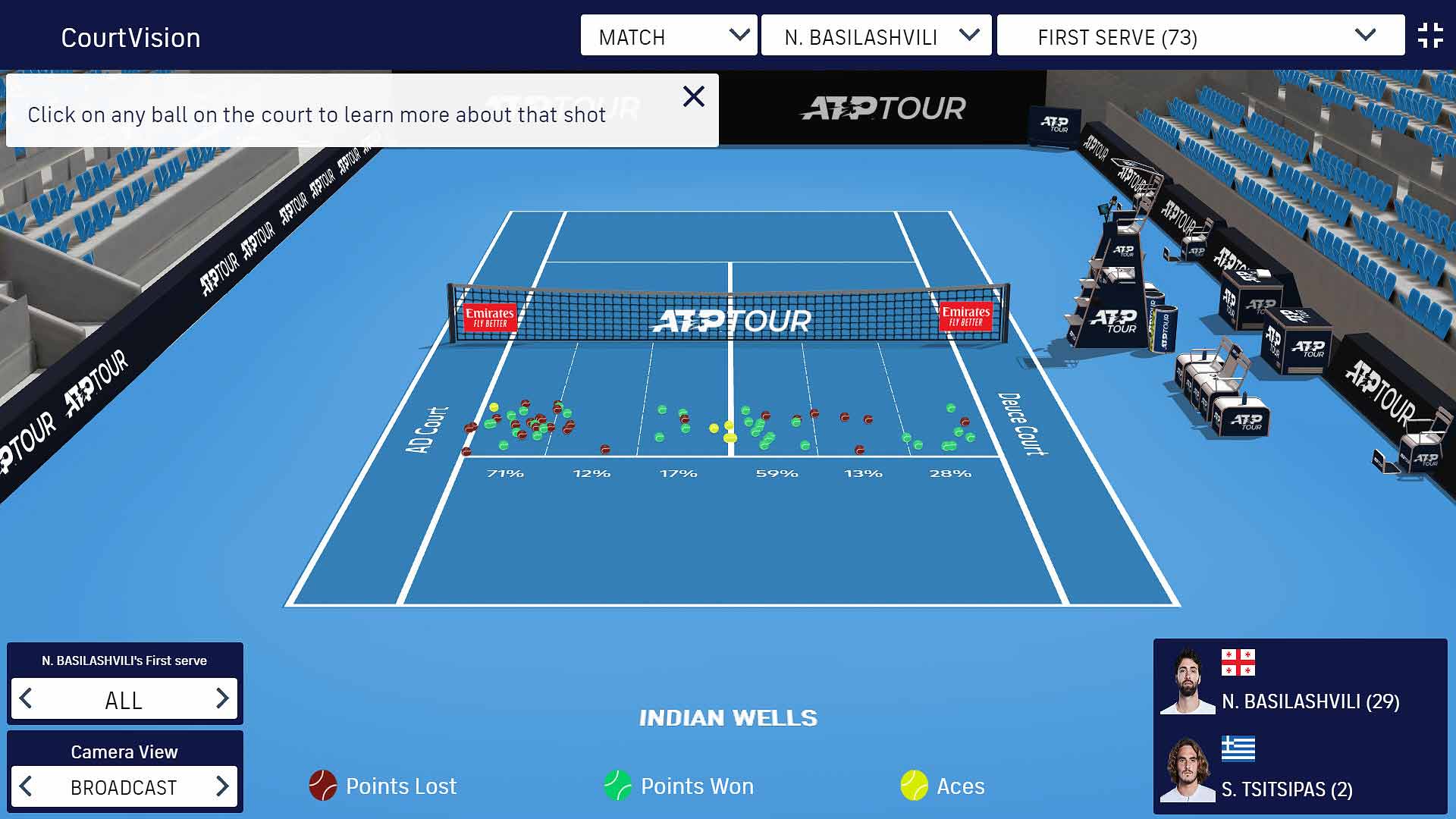 You May Also Like: Dimitrov Downs Hurkacz, Moves Into Indian Wells SFs

In a lively first set, Basilashvili made a fast start as he broke in the opening game, causing Tsitsipas problems with his powerful groundstrokes. The Georgian controlled the tempo of the match, notching 14 winners in the first set as Tsitsipas struggled to find his rhythm from the baseline.

However, the Greek began to gain momentum in the second set as he dominated the longer rallies as he soaked up Basilashvili’s power. The 23-year-old did not face a break point on his serve as he levelled.

After breaks were exchanged in the third set, Basilashvili produced a strong return game and was gifted the lead when Tsitsipas double faulted on break to move 4-3 ahead. From there, the Georgian kept his composure, fending off pressure from Tsitsipas to hold serve twice to advance.

Tsitsipas was aiming to reach his third consecutive Masters 1000 semi-final in North America, having enjoyed a run to the last four in Toronto and Cincinnati. The Monte-Carlo champion has earned a tour-leading 54 victories this season.